The 67-year-old had been speaking to a judge for 20 minutes and became ‘very animated’ before he collapsed, a judicial source said.

He was rushed to hospital where he later died. 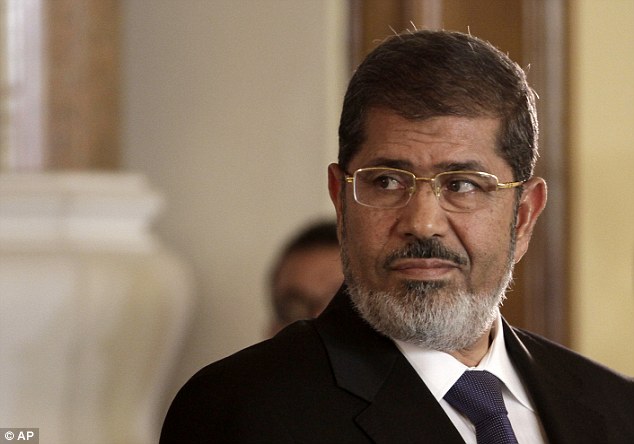 Morsi, a top figure in the Muslim Brotherhood, was toppled by the military in 2013 after mass protests against this rule.

He had been serving a seven-year sentence for falsifying his candidacy application for the 2012 presidential race.

‘He was speaking before the judge for 20 minutes then became very animated and fainted. He was quickly rushed to the hospital where he later died,’ a judicial source said.

The official Al-Ahram news website also reported the death of Morsi, who was Egypt’s first democratically elected president but spent just one turbulent year in office after the 2011 uprising before the army toppled him in July 2013.

Turkish President Recep Tayyip Erdogan paid tribute to Morsi after news of his death broke – calling him a ‘martyr.’

‘May Allah rest our Morsi brother, our martyr’s soul in peace,’ said Erdogan, who had forged close ties with Morsi.

Judge Kavanaugh's friend Mark Judge agrees to cooperate with FBI probe
Trump takes his 'mob' attacks on Dems to Arizona and links Sinema to Taliban
Priyanka Chopra's first wedding gift is extravagant $80K earrings from luxury French jeweler
Trump lashes out at James Comey's testimony to House investigators
Teen boy, 14, is charged after his 12-year-old friend was shot dead in Virginia
Florida student aged just 11 arrested after 'refusing to recite the "racist" Pledge of Allegiance'
Sudan's ousted Omar al-Bashir 'had £100million cash and sacks stuffed with dollars at his villa'
Anguilla hotel worker had lethal doses of cocaine in his bloodstream during fight with US banker