Tyson Fury invoked the spirit of Winston Churchill by welcoming his German opponent to the ring to the war-time clarion call: ‘We shall never surrender.’

The surrender came from the corner of Tom Shwarz in the form of a flying towel as the referee called it off six seconds inside two rounds.

Fury is not much of a one for political correctness but the surrender he was not willing to make was that of his llneal world heavyweight champions and he defended it to perfection. 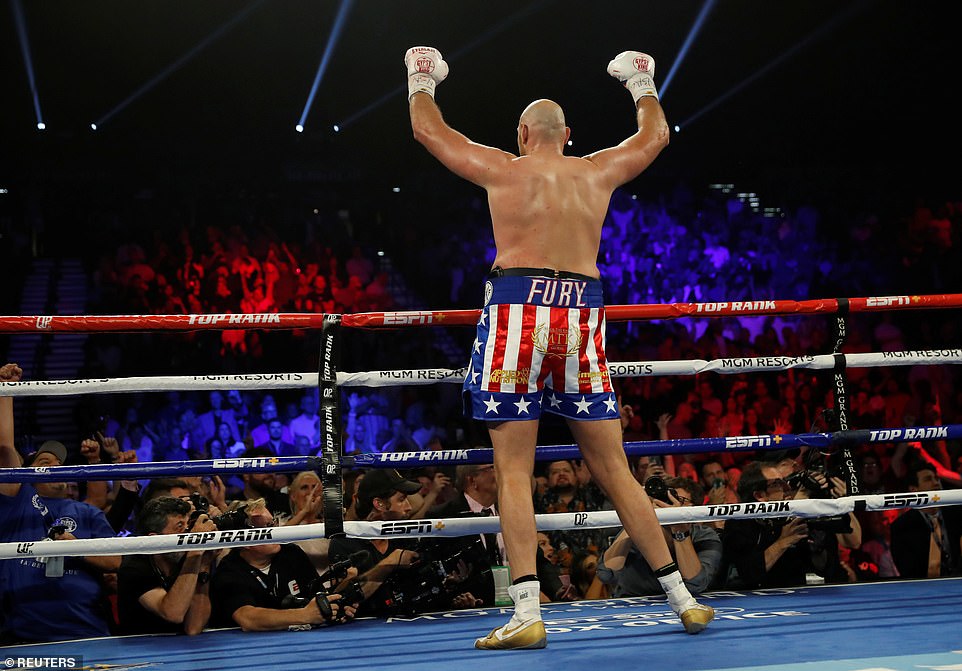 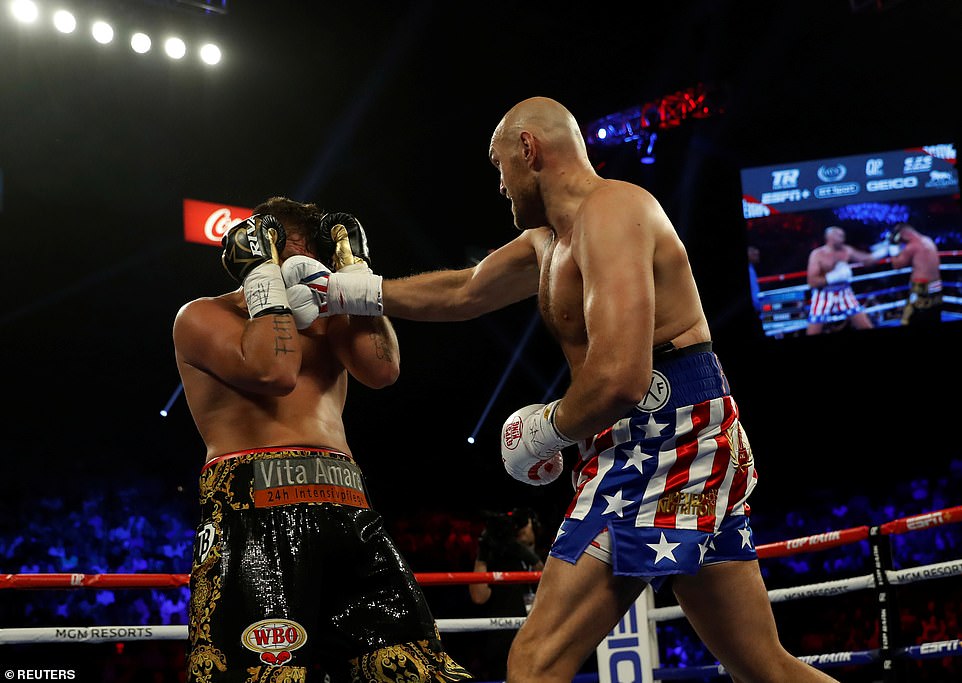 The fight was all Tyson Fury, easily taking the first round and then ending the fight early by technical knockout in round two 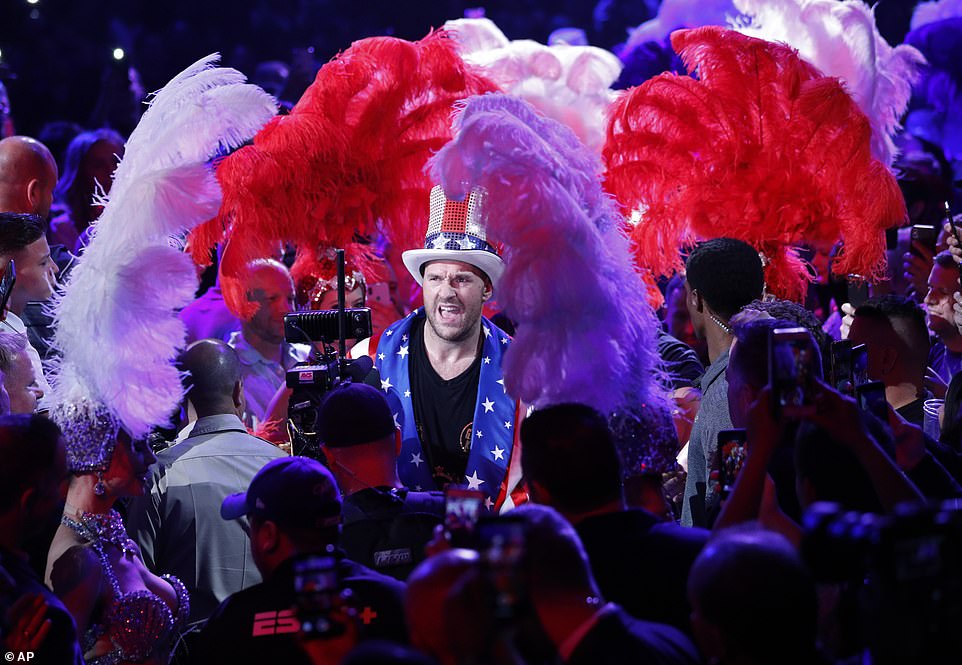 Ever the showman, Tyson Fury made a quick change in his ring walk and came out in a star spangled banner robe and top hat

Not just with the knock but with the preceding five minutes filled with cameos of how wonderfully he can box now he has kept his weight down and himself in training.

No, the opponent was not the greatest but he tried just enough to make a fight of it so that Fury could make the statements he wanted to America and their world heavyweight champion Deontay Wilder.

The selection of as weak a challenger as Schwarz for such an important night was questionable but he did the job, fortunately without a protracted exercise in ring education.

Round 2: Fury wins by TKO

The Gypsy King decked himself out in star-spangled shorts from the start and after making short work of Schwarz roared ‘God Bless America.’

Then came his personal submission to his wife, Paris, as he seized a microphone and sang to her in the ring: ‘Sweet Surrender.’

The crowd, be they his fellow travellers or the curious Vegas tourists, loved it.

They wanted to know if the rematch of the epic Wilder draw would be next and he answered: ‘Another fight here in September or October and then Wilder in the new year’ 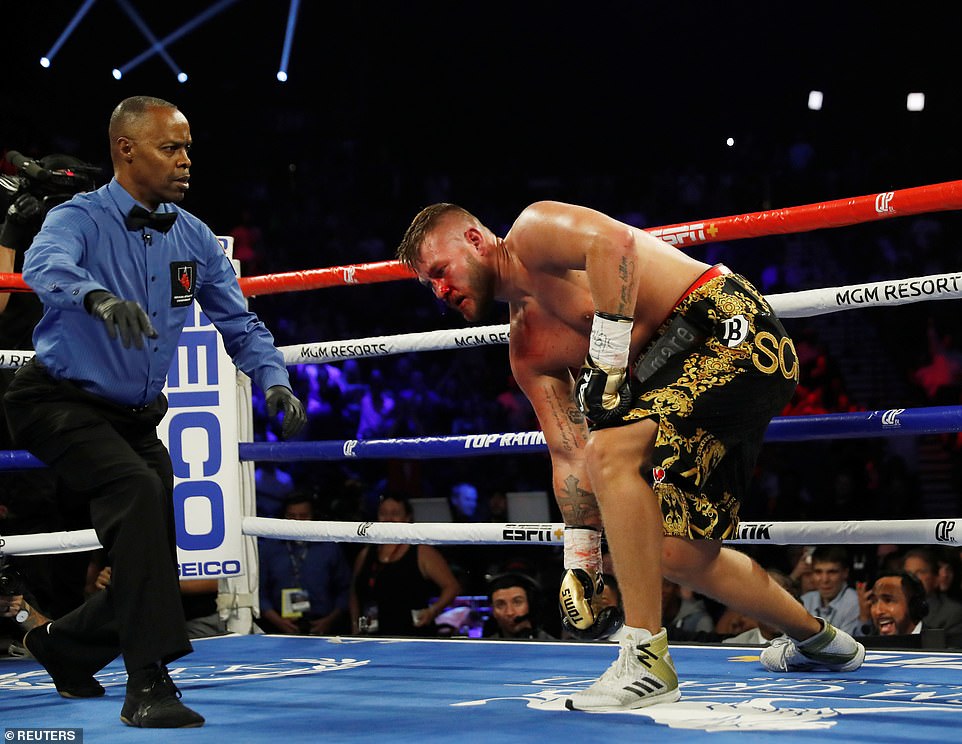 Tyson Fury sent his opponent down to one knee in the second round, bloodying his nose and preparing to end the fight 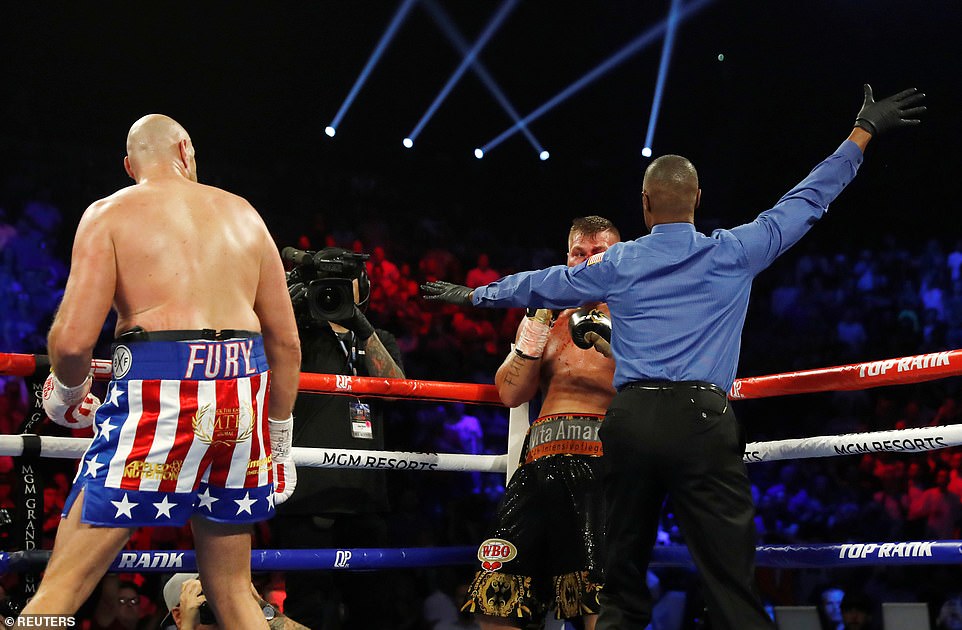 The big sell is under way with his Vegas debut out of the way but the next interim opponent will need to be more credible than this one.

This was a more focussed Fury than in many of his fights. He stood Schwarz up with left jabs and crosses in the first. Then he switched to southpaw in the second, not only raining hammer blows on his challenger from all angles but bringing up many of them from below waist height.

It was just a matter of time, thankfully a very short time.

The giant screens showed Fury and his wife Paris arriving early, with him then rearranging the pillows on the massage table in his dressing room and settling back for a nap. This caused wry amusement in the half empty arena. Most of the good folk here were probably too young to remember the old sepia photographs of Muhammad Ali sleeping in the hour or two before fights but they saw the funny side.

Then came a video of Schwarz and his wife leaning across his dressing room table, with him yawning widely while she soothingly massaged his hands. That created some misgivings among those who had paid for tickets.

Was the German here to fight or fold? To bid for glory or go home with his predicted rounded-up purse of a million dollars?

Superficially, at least, those pictures mirrored a certain level of disinterest in this alien event transported to the Las Vegas Strip. 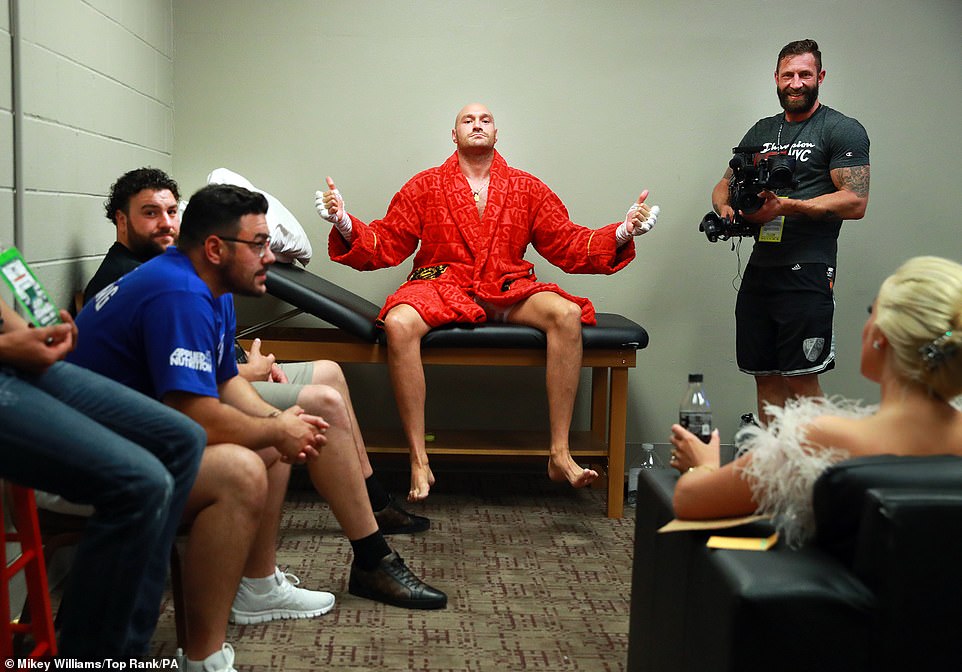 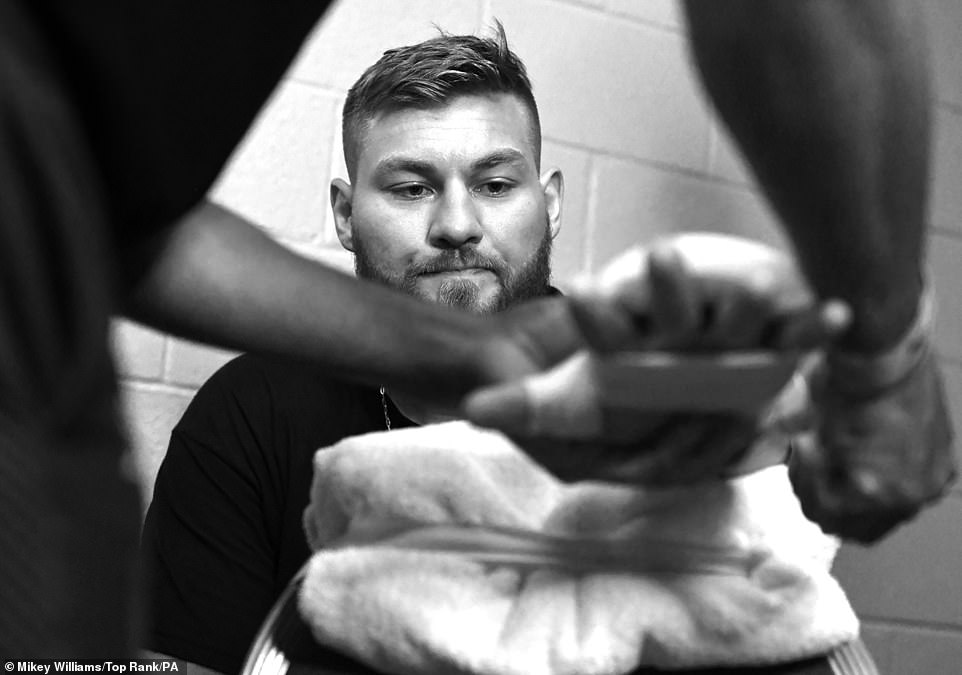 Fury had done his charismatic best to hype the night but the upper tiers of the venue were hidden from view by black curtains. As he should with his nominal million registered the Nevada State Athletic Board expected to be boosted to $13.5 million by ESPN, his television paymasters.

The seats in the lower tiers gradually filled as the main fight approached, possibly helped by the admission of MGM employees and favoured guests. Even if so, they helped an animated British contingent generate a more virile atmosphere than had been evident around the Strip through fight week.

They also accumulated an official attendance of 9,012.

Then war-time sirens sounded and he shrugged off the robe to reveal a US outfit complete with red-white-and-blue top hat to a voice-over from Sir Winston Churchill: ‘We shall never surrender.’

Never one much bothered about political correctness, that was the Gypsy King’s welcome to his German opponent. 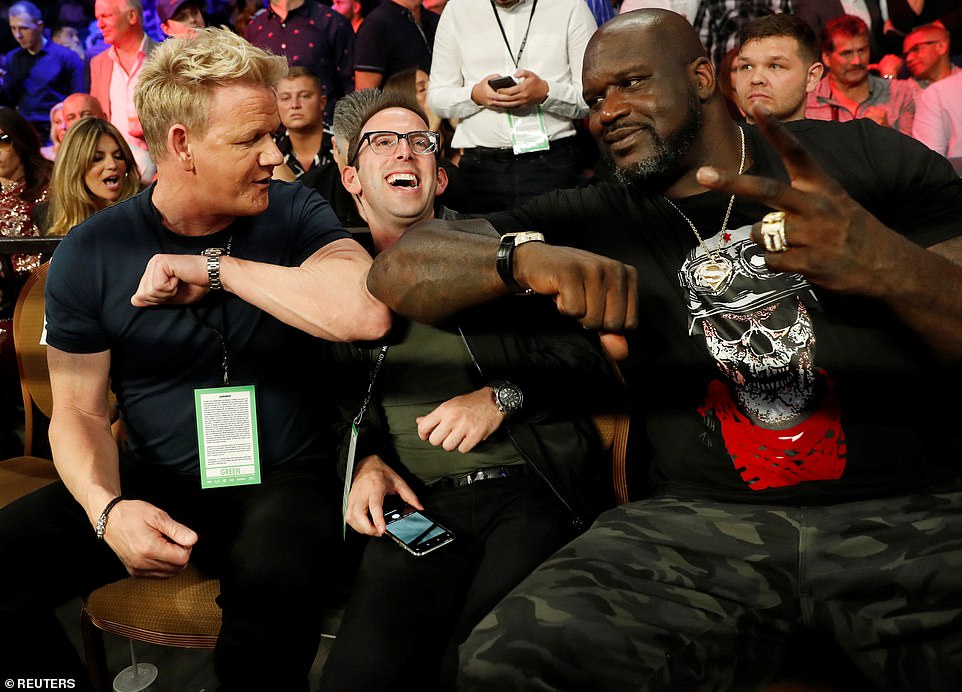 The celebrities were out in force as usual, with the likes of Gordon Ramsey and Shaquille O’Neal watching from ringside

Oddly, Fury’s odds had shortened in the last couple of days. He was still very much the favourite at 1-12 on.

Fury had promised a first round knock out but he chose to settle into his boxing stride, winning it comfortably behind his long left jab despite a couple of swishing lefts from the German (10-9).

Fury switched to southpaw at the start of the second and was teaching Schwarz a lesson until the German landed right. That proved unwise. Fury changed up several gears, dropped his guard and went to work with a vengeance. A huge right dropped Schwarz and with Fury piling on the punishment referee Kenny Bayless had no option but call it off, even as the towel of surrender flew into the ring from the Schwarz corner. 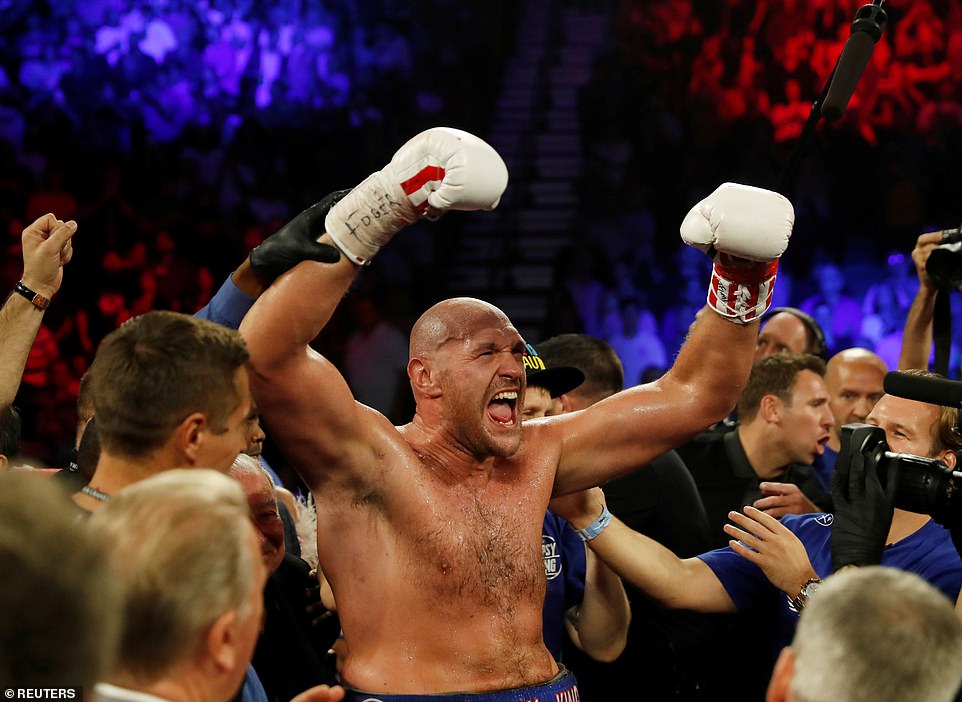