Revellers at the Isle of Wight Festival have mixed waterproofs with bikinis as they attend the penultimate day of the music event in Newport.

It comes after five days of torrential rain across Britain – but the sodden conditions have done little to dampen their spirits at the island festival, whose performers today include George Ezra, Fat Boy Slim and Rick Astley.

However, hundreds of homes still remain at risk, with 53 flood alerts issued by the Environment Agency today – mostly in the Midlands and North West. As of June 12, the UK has seen 65.7mm of total rainfall.

But there is good news on the horizon, as temperatures in the UK are rising from below-average to above-average levels this weekend.

Martin Bowles, from the Met Office, said: ‘The highest temperatures in the UK over the coming days will be in southeast England where the following maximums are forecast – Saturday and Sunday, 20C (68F); Monday 22C (72F); and Tuesday 25C (77F). 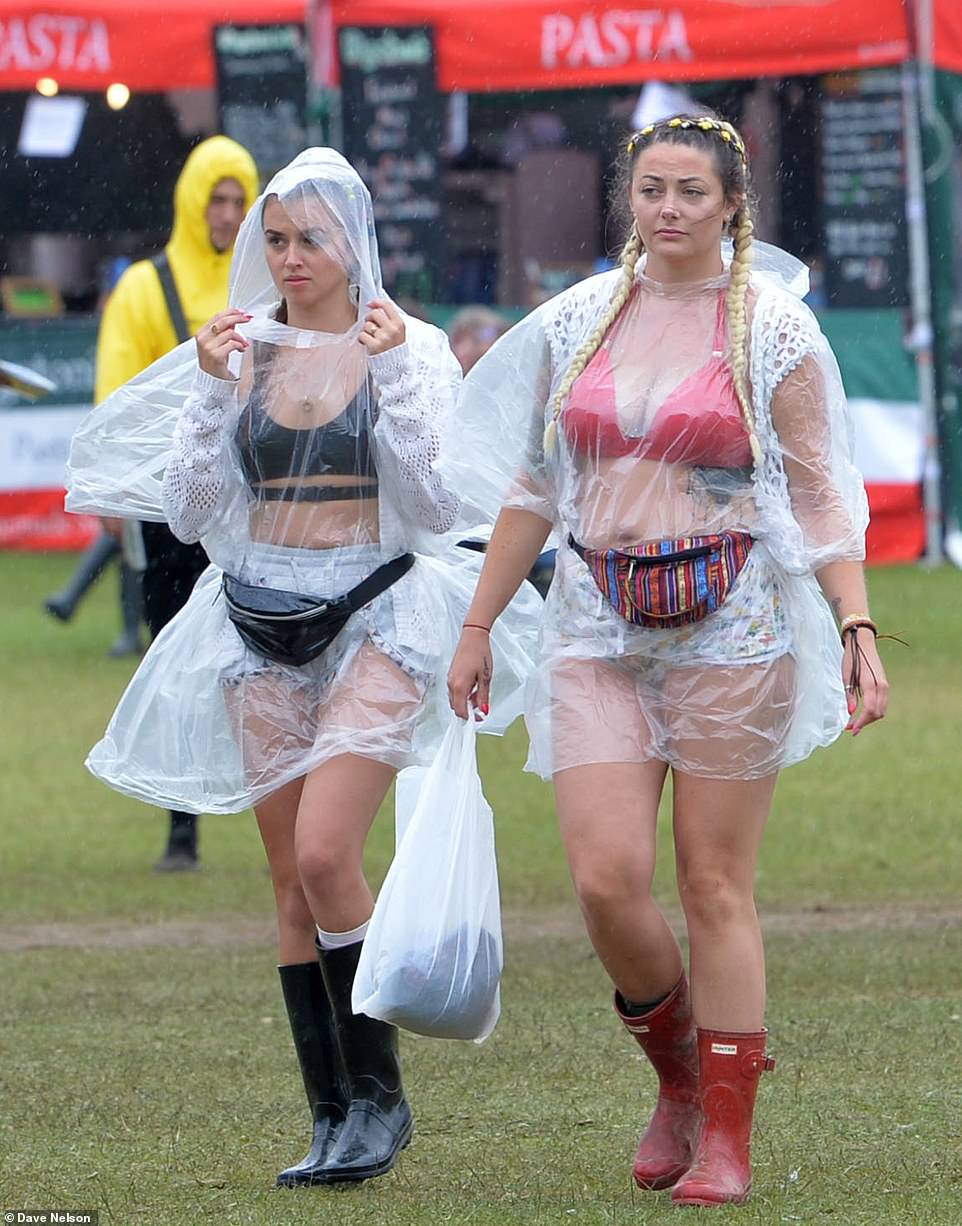 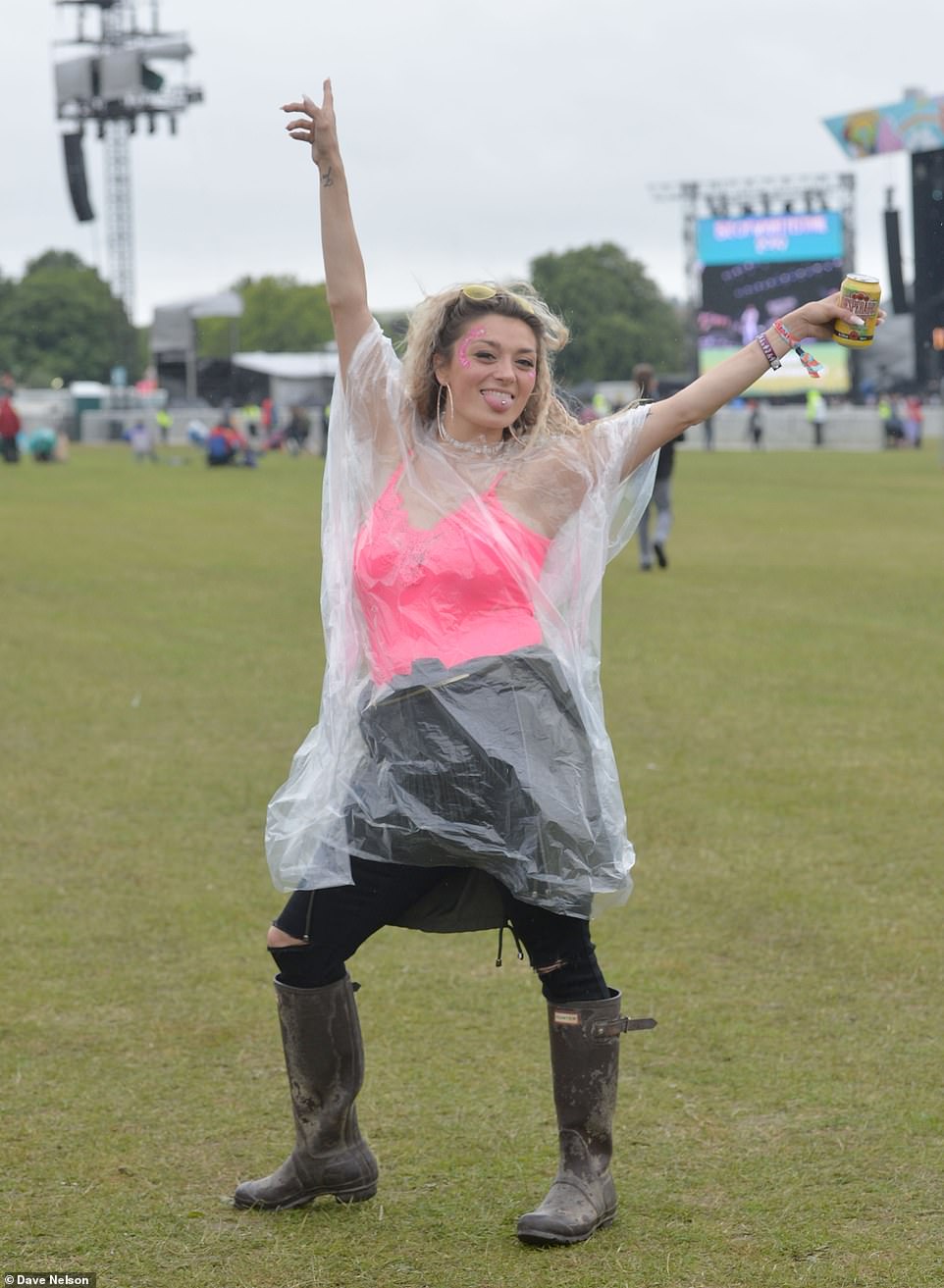 Miserable weather plagued the start of the music festival, in Newport, and the return of the downpours has done little to dampen the spirits of music fans today 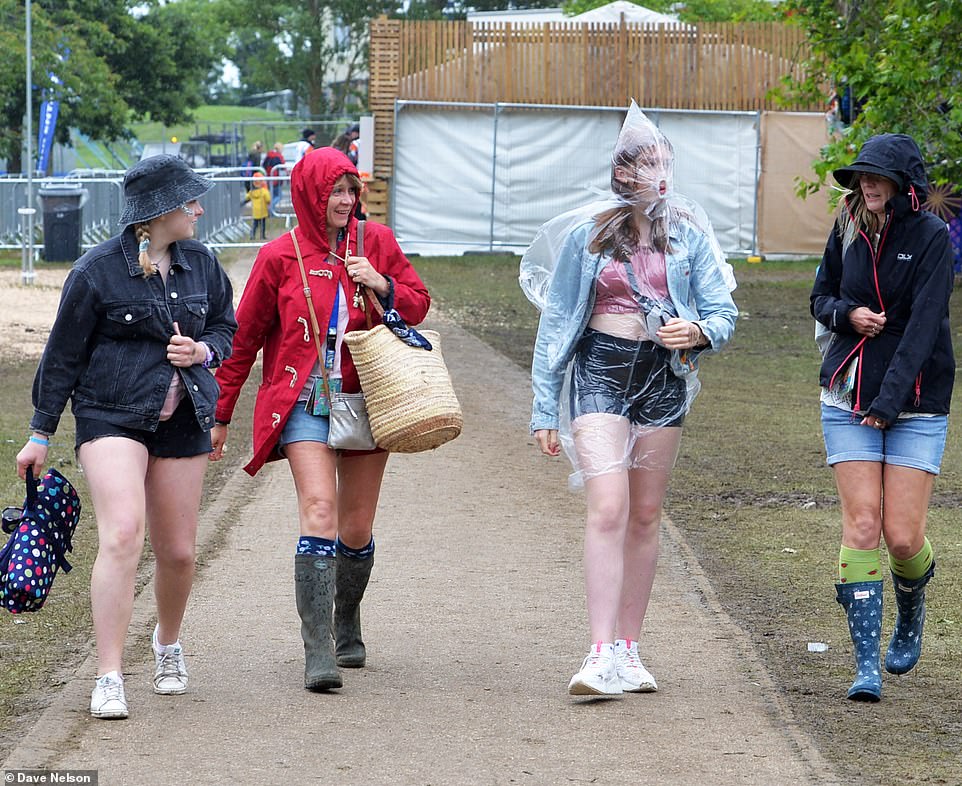 The line-up at the Isle of Wight Festival today includes Fat Boy Slim, George Ezra and Rick Astley – which is more than enough to divert attention away from the grey skies for these festival-goers 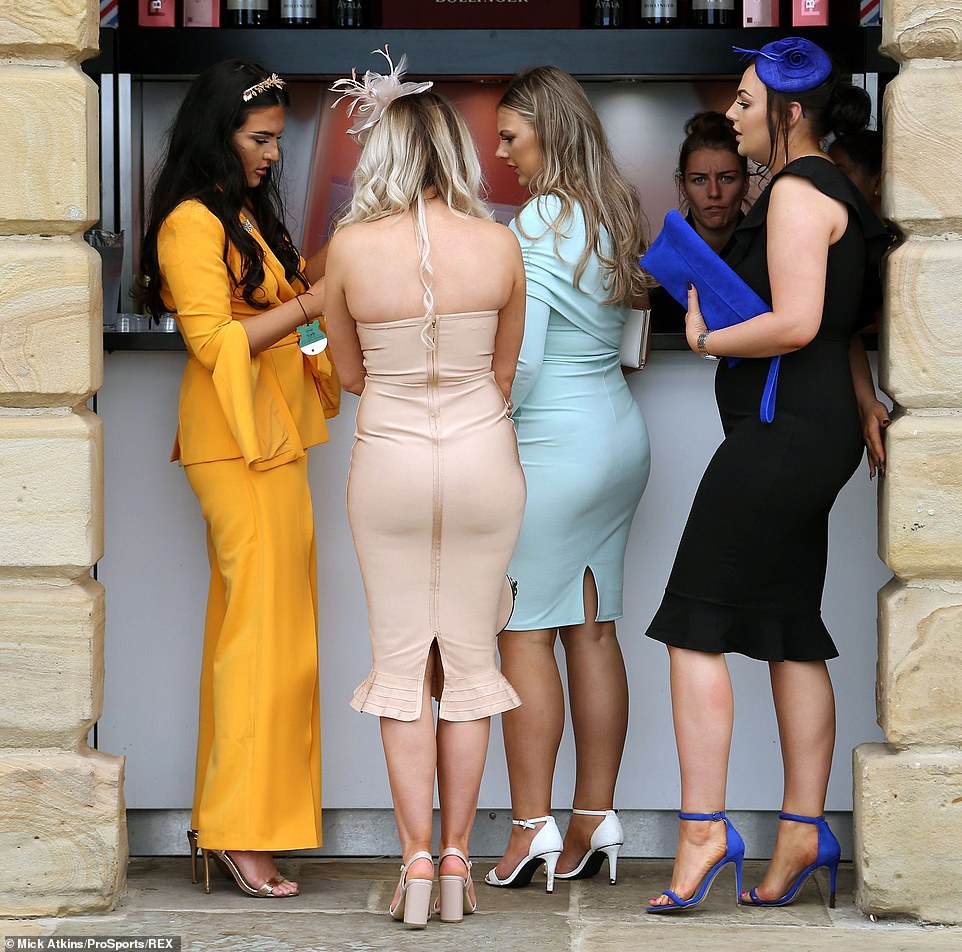 Four women gather by the drinks stand before the Macmillan Charity Raceday kicks off at York Racecourse today – where the mercury is set to hit 18C (64F), with a slight chance of rain 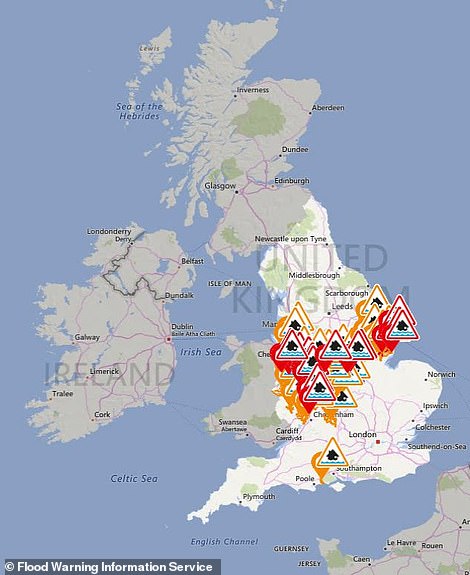 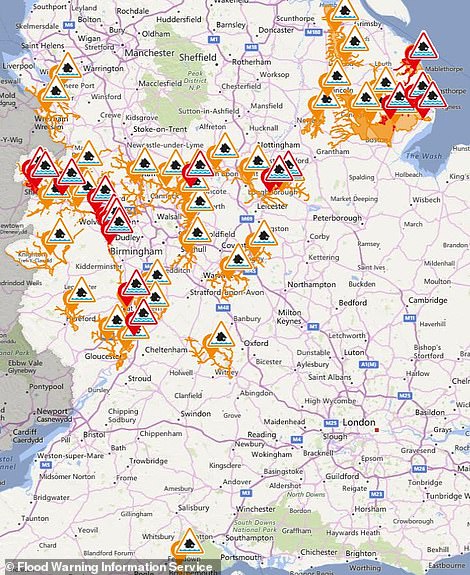 After five days in a row of torrential rain across Britain since Monday, hundreds of homes still remain at risk, with 52 flood alerts in place today – mostly in the Midlands and North West – according to the Environment Agency.

‘This is due to a ridge of high pressure building over the UK, and a change to a southerly flow bringing warm air from France and Spain.’

Exacta Weather’s James Madden said it was an ‘abysmal start’ to summer, but added: ‘With better weather on the horizon in the coming weeks, a flaming June is still on the cards.’

This will come as scant consolation for one homeowner who says she has lost ‘everything’ to flood water after heavy rainfall submerged the town of Wainfleet All Saints in Lincolnshire.

Jean Hart said she was left in shock as she watched the water wrecked her house.

Mrs Hart has been left with only the clothes on her back, her pets and her husband after the River Steeping burst its banks on Wednesday.

About 100 properties were hit by the flooding but Lincolnshire County Council warned that up to 720 could be affected after it said the town of Wainfleet had more than two months of rain in just two days. 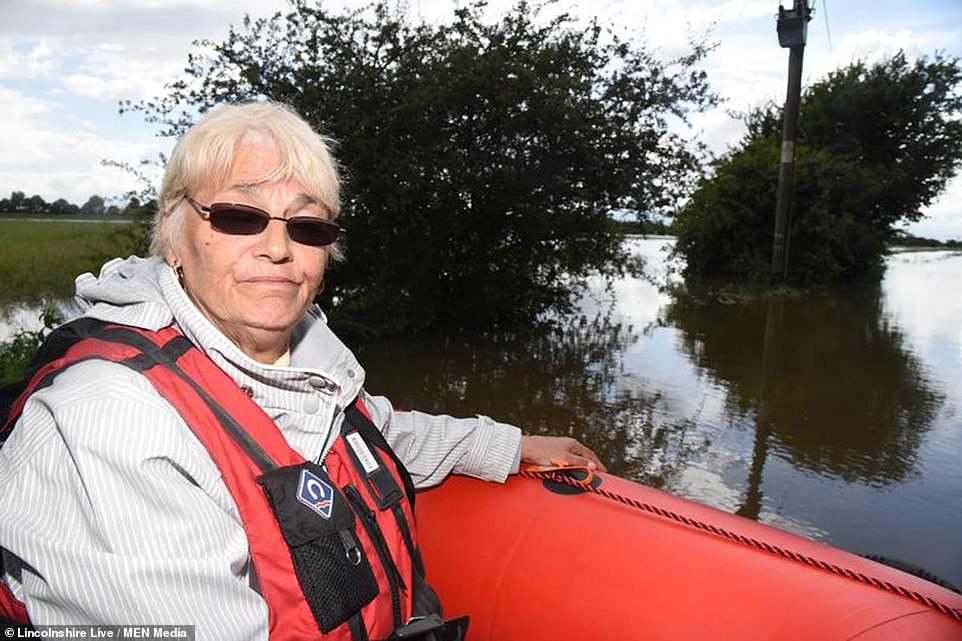 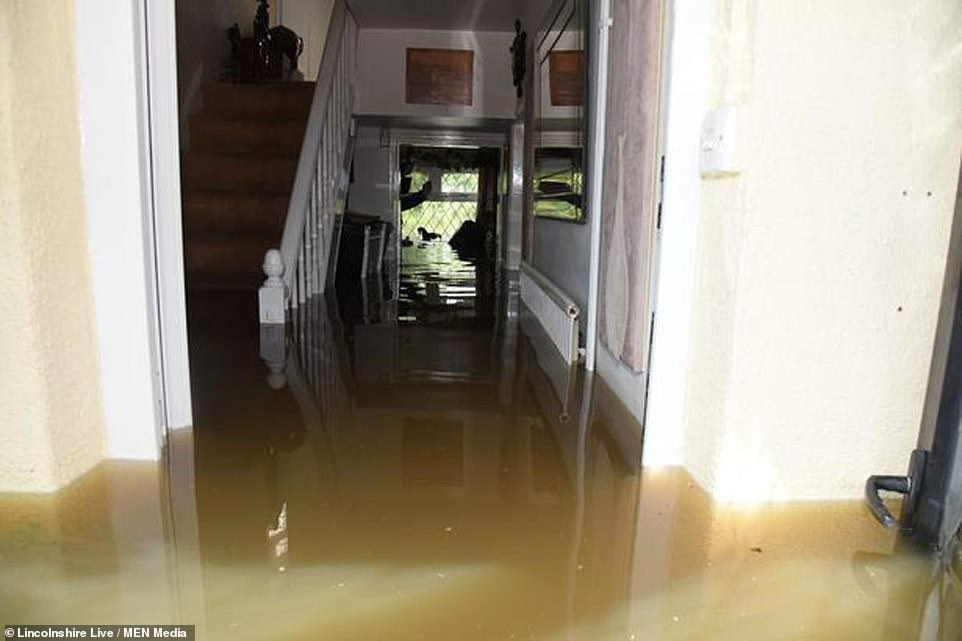 Mrs Hart said she was left in shock as she watched the water wrecked her house. Pictured, the ground floor of her property is seen submerged in floodwater today 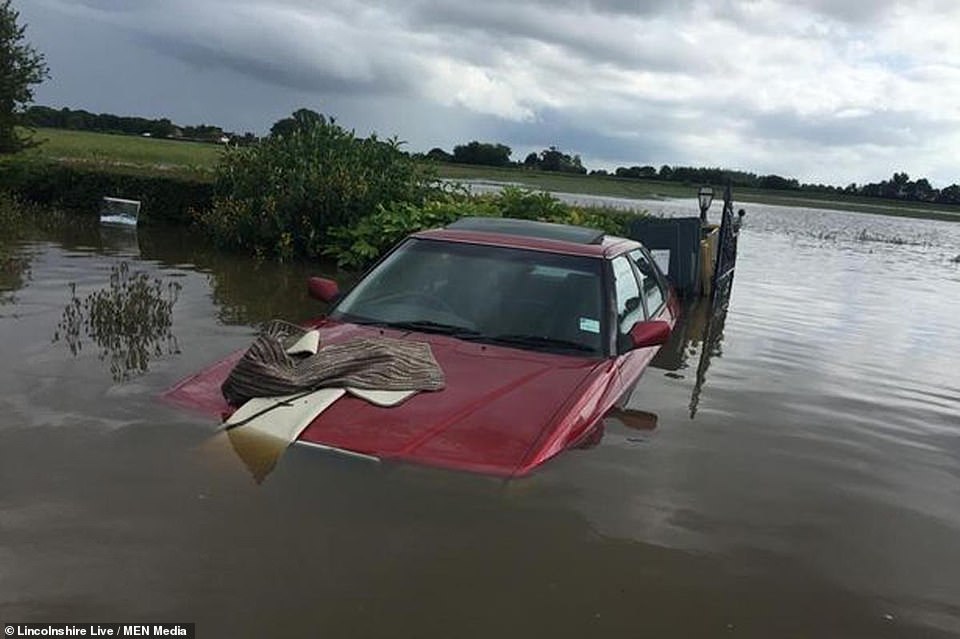 Mrs Hart has been left with only the clothes on her back, her pets and her husband after the River Steeping burst its banks on Wednesday. (Above, her car, stuck in floodwater) 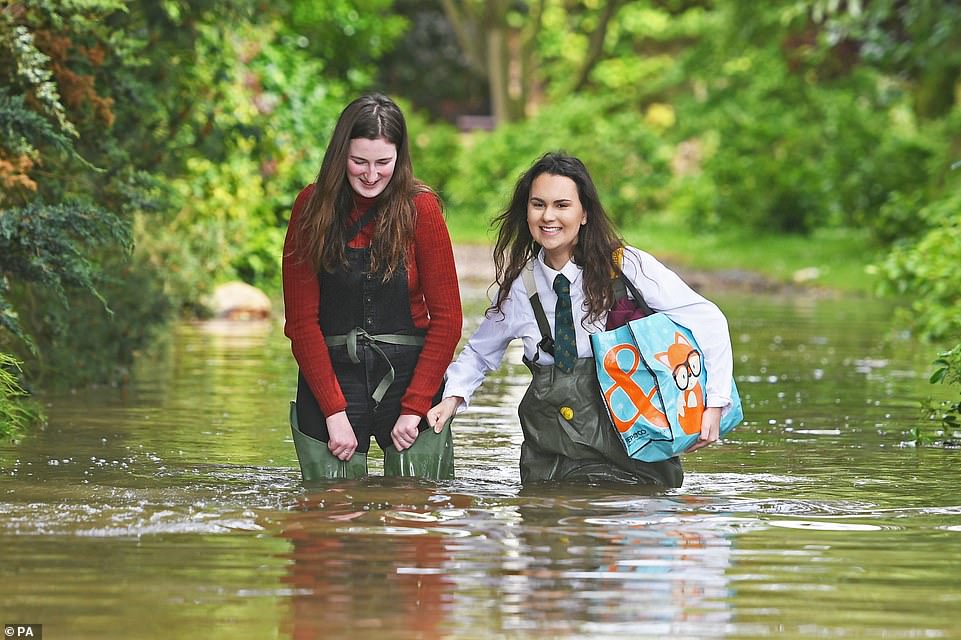 About 100 properties were hit by the flooding but Lincolnshire County Council warned that up to 720 could be affected after it said the town of Wainfleet had more than two months of rain in just two days. (Pictured, two Wainfleet locals struggle as they wade through the water) 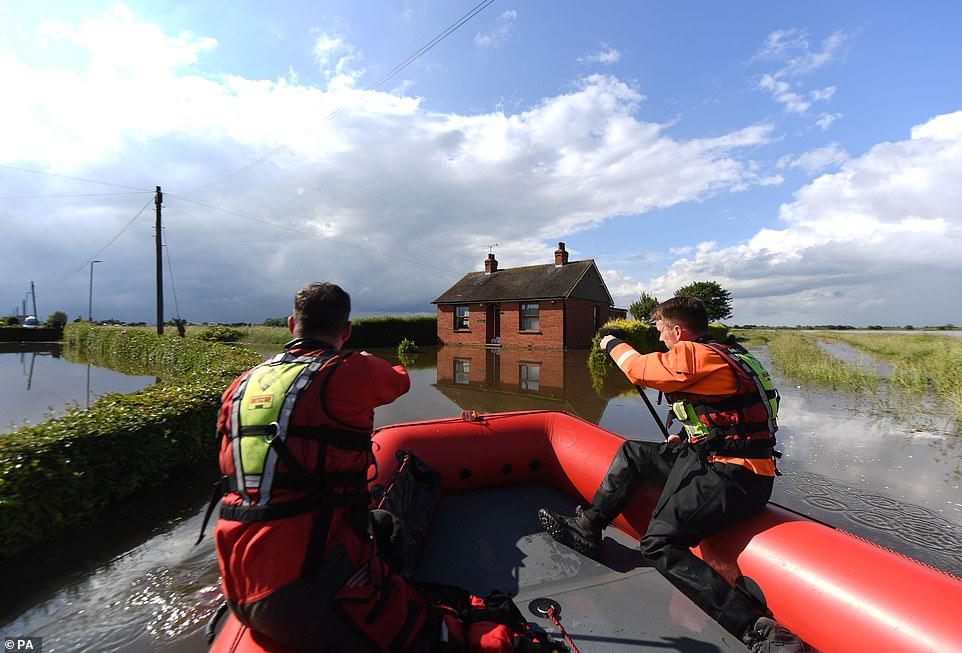 Rescue workers in Wainfleet today. Lincolnshire County Council said the response from the community to the flooding has been incredible 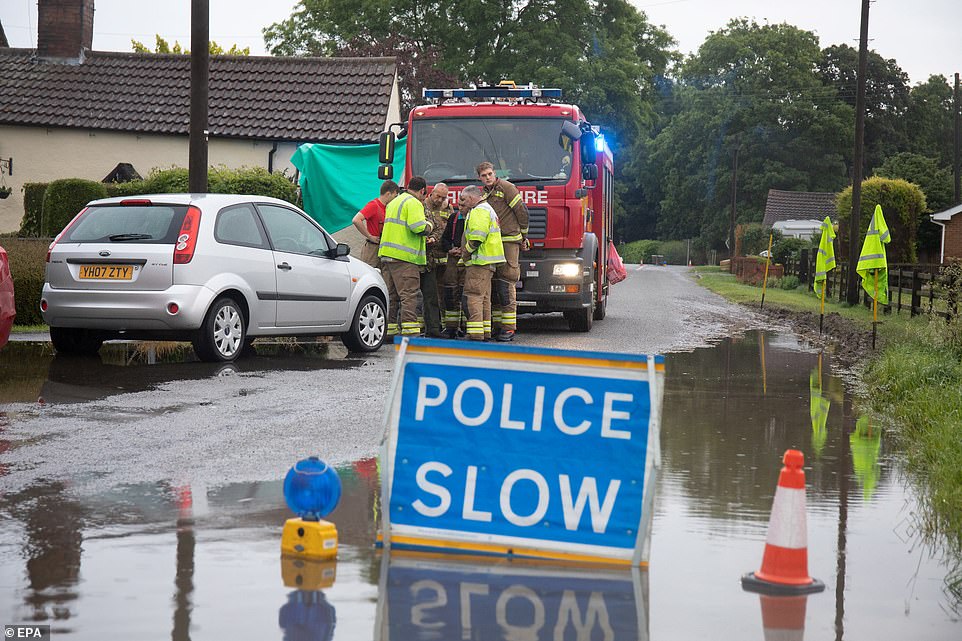 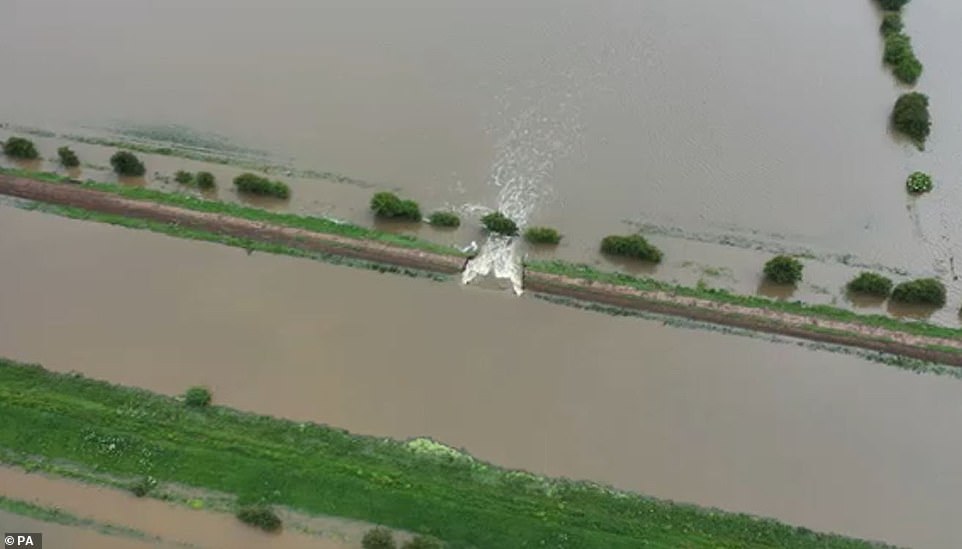 An aerial shot of the River Steeping breach. One resident said that the floods are the ‘worst that he’s seen’ since moving to the village in 1970

Speaking to Lincolnshire Live on Friday, Mrs Hart said: ‘The whole of the bottom of our house is completely gone. Everything’s floating including our beds. We recently renovated the whole of the first floor, but now everything we own is in foul water at the moment.’

‘We managed to get up yesterday and rescue the cat and then we went back again with a TV cameraman in a little boat to get the tortoise. That was really important to me – we’ve lost everything else, I just couldn’t cope with losing my pets.’

She added: ‘We don’t really know what’s going to happen. Everything else is all contaminated because of the septic tank water. We’ve just been to the shop and bought a few clothes because what I’ve got on is all I’ve got.’

Lincolnshire County Council said the response from the community to the flooding has been incredible.

‘We are overwhelmed with the community response and grateful for everyone’s assistance,’ it tweeted out on Friday.

‘However at present we do not require any more volunteers in response to the Wainfleet incident at this point. Thank you!

Drone footage today of the flooding in in Wainfleet All Saints. Public transport services have also been delayed with diversions in place across the county 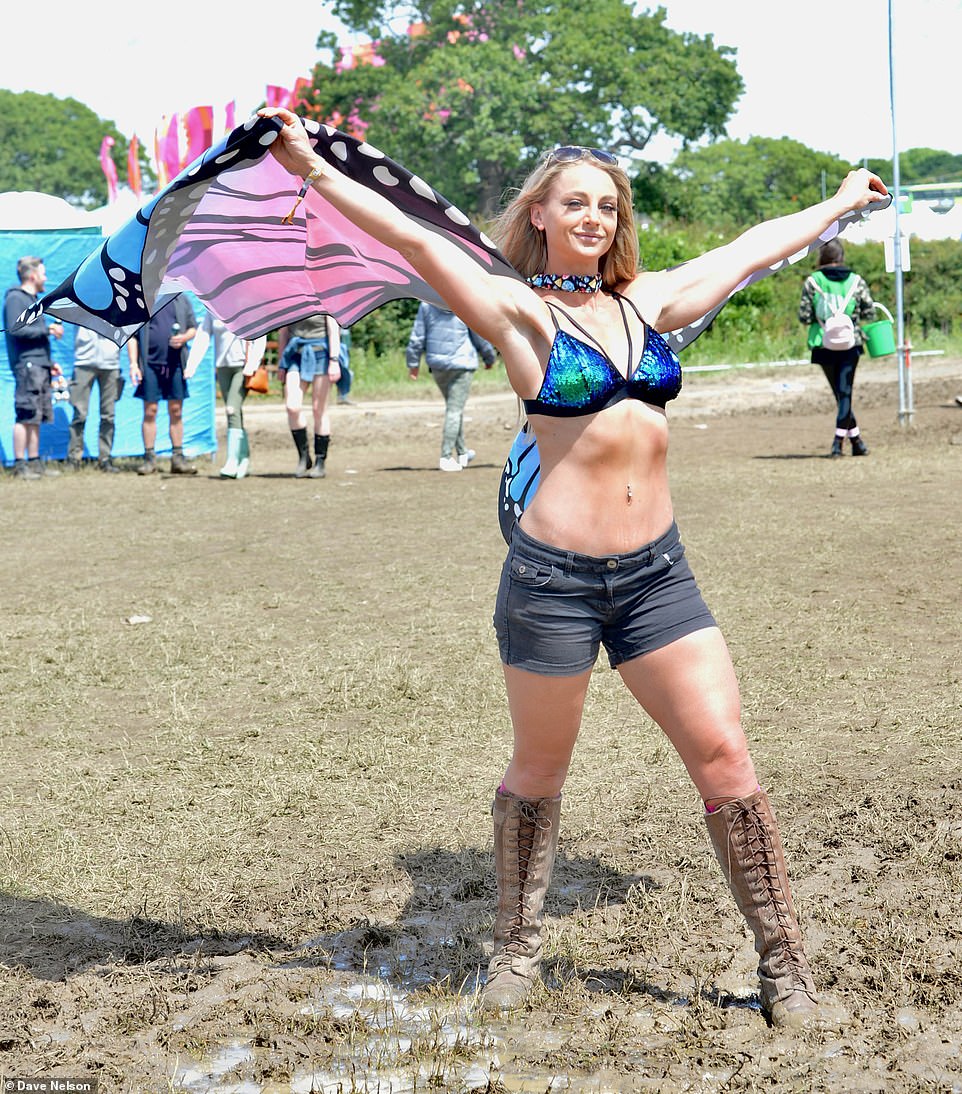 Lisa Fay, 28, from Basingstoke hasn’t let the bad weather stop her having a good time at the Isle of Wight festival – following five days of torrential rain across Britain

Saturday: Cloud and rain in the west will spread into central areas. Sunny spells will follow into the west with the odd shower. Eastern areas of the UK will have sunny spells with just the odd shower around. Temperatures still generally below average but a little higher than recent days.

And over at Download – the annual heavy metal and rock festival in Donington Park – which kicked off yesterday, in Derby, some revellers have been having fun with playful ‘mud fights’.

However, a number of punters left the site before the music even began, taking to social media to rename the festival ‘Drownload’.

Met Office spokesman Grahame Madge said that despite the treacherous conditions, June 2012 remained the wettest on record with 149mm.

‘Although we are at a point where some areas have seen their full amounts of monthly rain, so far we don’t think we’re on track to beat the 2012 record as a wet June,’ he said.

‘It’s something we do get now and again, which is obviously unwelcome for those people who have wanted to enjoy nicer weather.’

Showers are expected over the weekend but conditions are due to settle down, temperatures are anticipated to rise and no further weather warnings have been issued, the Met Office said.

** Have you taken any photographs of the rain or flooding today? Please email: pictures@mailonline.co.uk **

David Beckham and his boys do the Sydney Harbour Bridge Climb
Conjoined twins Nima and Dawa are both in a stable condition, and recovering in a ward
Father who named his baby after Adolf Hitler - spent a year in Israel studying to be JEWISH
Great apes and ravens DON'T plan like humans: Researchers claim they make plans 'without thinking'
Boris Johnson faces backlash over his war on 'sin taxes'
Kurds 'break Syrian ceasefire'
Russian village is under siege from FIFTY-SIX polar bears
Mallacoota bushfire hell: 4,000 trapped on beach in Victoria