The baby son of a woman murdered by a family of womb raiders in Chicago has died in the hospital, two months after being torn from her belly.

Yadiel Lopez had been on life support since April 30, when he was cut from his mother Marlen’s womb by Clarisa Figueroa and her daughter.

Marlen had gone to their home to pick up baby clothes after speaking to Clarisa on Facebook.

She was strangled and the women then used a butcher’s knife to cut the baby from her stomach and pretend he was their own for weeks before DNA testing proved otherwise. 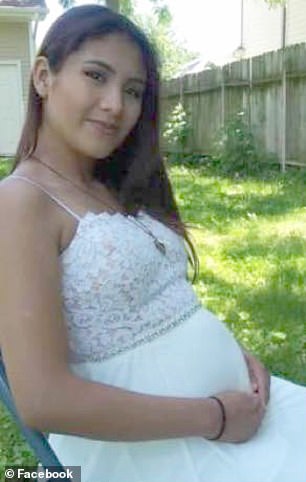 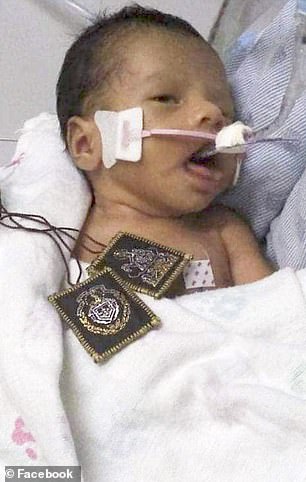 Yadiel Lopez had been on life support since April 30, when he was cut from his mother Marlen’s womb by Clarisa Figueroa and her daughter. He has died 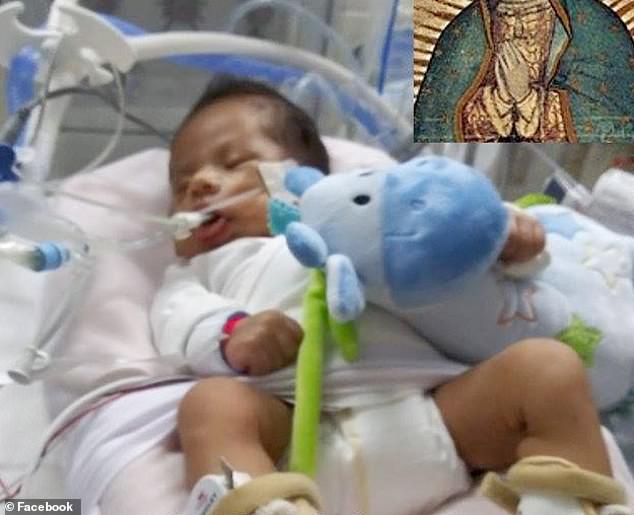 Yadiel is shown in a more recent photograph. The baby never recovered from the lack of oxygen to the brain that he suffered while being torn from his mother’s womb and in the final weeks of his life, his face and limbs had become increasingly swollen 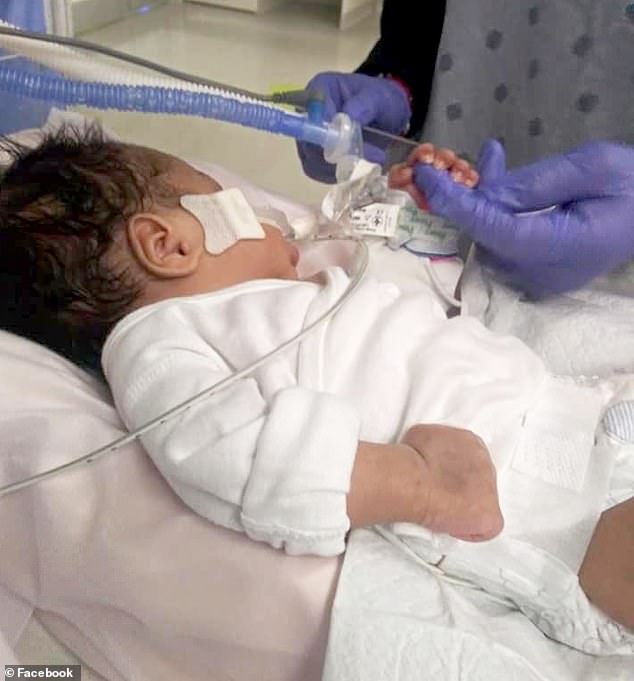 The baby’s hands and feet were swollen as were his cheeks. He is shown in the hospital before having his life support turned off on Friday

The baby boy’s father, Yovani, had been praying for his recovery and was hopeful that he would survive.

Despite weeks of promising false starts, like when the baby opened his eyes, he never regained full brain function and was pronounced dead in the hospital on Friday.

‘It is with great sadness that we inform you of the passing of baby Yovanny Jadiel Lopez. He passed away this Friday June 14, 2019 from his severe brain injury.

‘Please keep his family in your thoughts & prayers as they go through this difficult time,’ family spokesman Julie Contreras said.

Clarisa, her daughter and her boyfriend remain in custody awaiting their next court date.

On April 30, Marlen went to their home in Chicago to pick up free baby clothes.

She had been to their home once before for other items.

The 19-year-old mother was pregnant with her second baby and had been scouring social media looking for cheap or free goods to prepare for his birth. 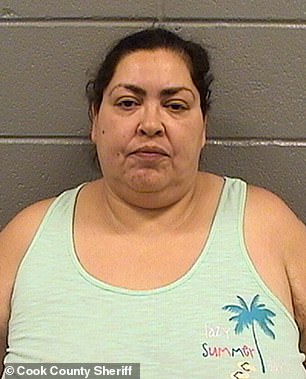 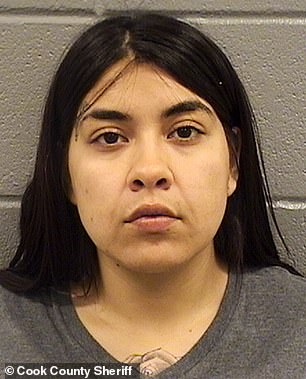 Clarisa Figueroa, 43, and her daughter Desiree, 24, are being held on murder charges for Marlen’s death. It is unclear if they will now also be charged with Yadiel’s death 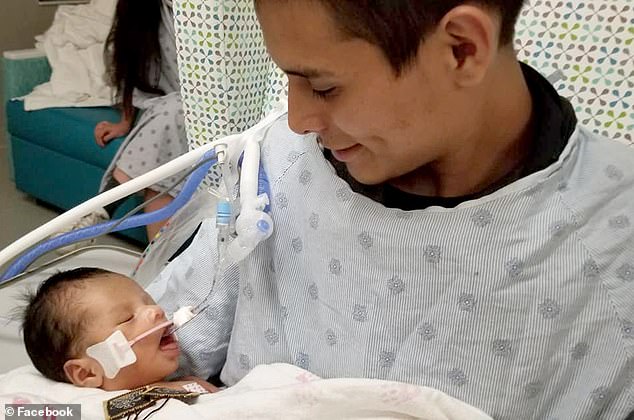 Baby Yadiel is shown in his father Yovany’s arms not long after the gruesome murder plot was discovered last month. He’d been in the hospital for two weeks while his mother was missing, unbeknownst to his real family, while his mother’s killers pretended he was their own

Once in the Figueroas’ home, prosecutors say Clarisa distracted her with a photo album of pictures of her dead, adult son.

She then placed an electric cable around her neck and strangled her to death.

Desiree, her 24-year-old pregnant daughter, was also in the room. 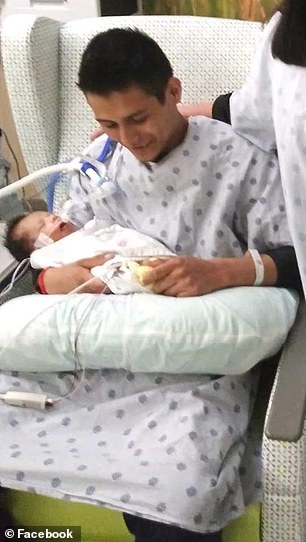 Yovany had been praying for a miracle for his son’s recovery. He is shown in the days after he learned he was in the hospital

As Marlen fought for her life by placing her fingers in between her neck and the cable, Clarisa screamed at her daughter to stop her.

Desiree then got out of her chair and pried Marlen’s fingers, one by one, away from her neck.

Once Marlen was dead, Clarisa took a butcher’s knife to her stomach, sliced it from side to side, then pulled Yadiel out.

She put him in a bucket with the umbilical chord still attached then put his mother’s body in a trash can in their yard.

The older woman then called 911, claiming to have just given birth herself.

When an ambulance arrived at the house, she was outside waiting for them. Paramedics never went inside.

Instead, they transported Clarisa and the baby to Advocate Christ Medical Center where she taken for an examination and he was put on life support.

Despite being looked over by an obstetrics technician and despite not having given birth, no one raised any concerns.

Meanwhile, Marlen’s family were at home wondering where she had gone.

When she did not come home, her husband reported her missing. He was told, he claims, that it had not been long enough since she vanished.

After 72 hours, he reported her missing again but claims police immediately suspected him. 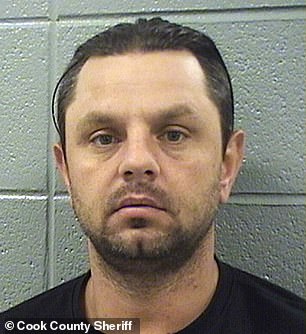 Piotr Bobak, Clarisa’s boyfriend, has been charged with helping cover up Marlen’s murder

For weeks, the family pleaded for information about where she had gone.

Then, on May 8, a friend of Marlen’s family told police she had been in contact with someone on Facebook to try to get free baby clothes.

Officers only then went to the Figueroas’ home. There, they found Desiree who said her mother had just given birth. They then found Marlen’s car nearby and ordered a warrant for DNA testing on the baby that Desiree claimed was her brother.

When the test results came back proving that he was Yovany’s baby, detectives searched the Figueroas’ home and found Marlen’s body in the back yard.

The hospital and the Chicago Police Department have come under harsh scrutiny for their handling of the entire incident.

For weeks before they were discovered, Clarisa pretended the baby was her own and even campaigned for donations for him on GoFundMe.

For months before she met Marlen, she had been claiming online that she was pregnant, despite having her fallopian tubes tied.

Oakland Raiders star Marshawn Lynch sits throughout nationwide anthem
Trump once more blasts Jeff Classes in Twitter tirade and threatens to 'become involved'
Five children who were riding in the back of a car and not wearing seatbelts are killed
Bodycam footage released showing police fatally shooting unarmed woman, 24
Trump plans outdoor carnival with food trucks and a party band before he announces re-election bid
'National anxiety' about mass shootings following massacres in El Paso and Dayton
Horror lab where monkeys were strapped into harnesses faces closure after German inspectors' raid
Mike Tyson reveals he is 'looking forward' to death