On Tuesday she appeared on The Tonight Show Starring Jimmy Fallon and two days later, Selena Gomez was already on her way out of the windy city.

After a week of promoting her new movie, The Dead Don’t Die, Selena, 26, was spotted jetting out of John F. Kennedy airport on Thursday.

The songstress traveled comfortably wearing a mint colored sweatsuit with a cream and brown colored teddy coat in her hands. 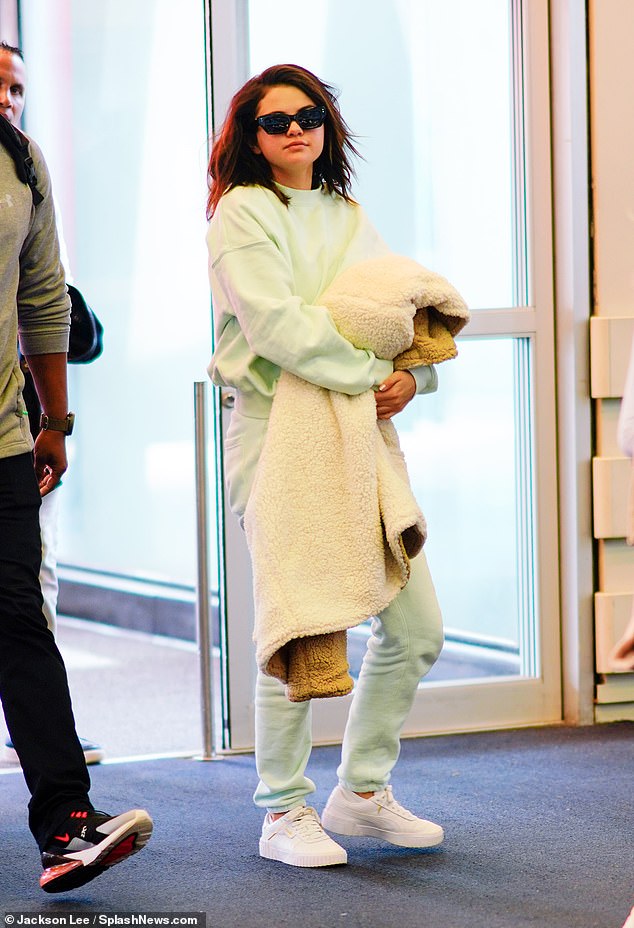 Gotta go: Selena Gomez, 26, was spotted in comfortable clothing while jetting out of New York City on Thursday 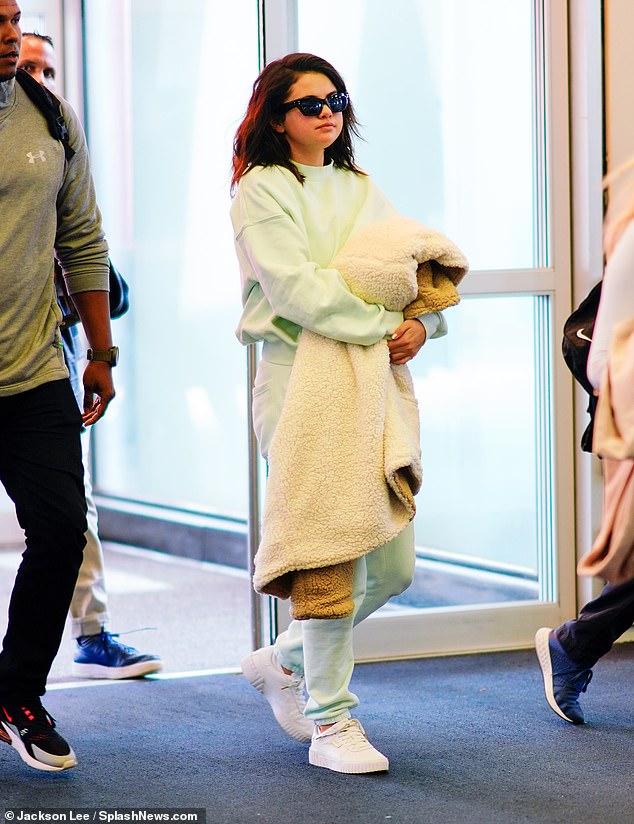 Shop the look at Ssense!

Where once we would have never dreamed of stepping out in loungewear, we’ll now make any excuse to try out the latest cosy style.

Selena Gomez’ mint green pick has just found itself at the top of our wish lists. From LA label Essentials, the pastel set looks snug and oh so luxe!

We love the subtle branding and those elasticised cuffs give it an on-trend, retro vibe. Selena’s pick is from the menswear line, but that oversized silhouette is a must-have this season.

Click right to bag the joggers for yourself, then head to the edit below for the star’s stylish Puma trainers. While you’re there, make sure to have a browse of our roundup of lookalikes.

Pair yours with a white tee for an effortless celeb-off-duty style which will be sure to get more than a few envious stares.

Gomez cut a casual figure in white sneakers and with her tan jacket over her arm.

The beauty donned large sunglasses and with her brunette hair in messy waves. 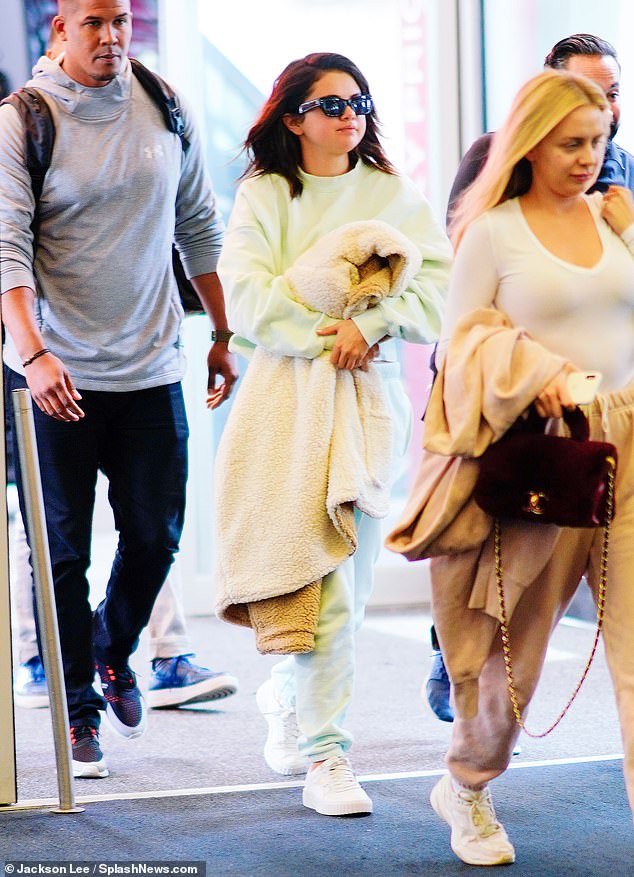 Comfort over style: As Selena’s team followed behind her, the beauty donned large sunglasses and with her brunette hair in messy waves

Chill: Gomez cut a casual figure in white sneakers and carried a tan jacket over her arm

Where Selena is headed to next is unknown, but her media tour for the upcoming film The Dead Don’t Die, which is out today, has kept her busy as of late.

The film stars Adam Driver and Bill Murray and is all about a small town that’s turned upside down after a zombie uprising.

Gomez plays Zoe in The Dead Don’t Die, a young woman who is travelling with Jack (Austin Butler) and Zach (Luka Sabbat). 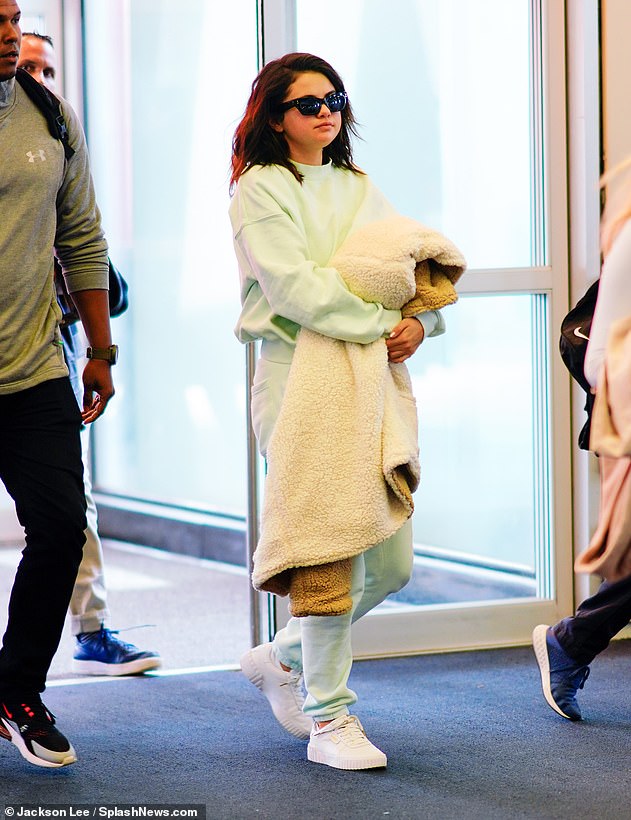 First class: Selena cuddled her coat in her arms as she strolled through the airport 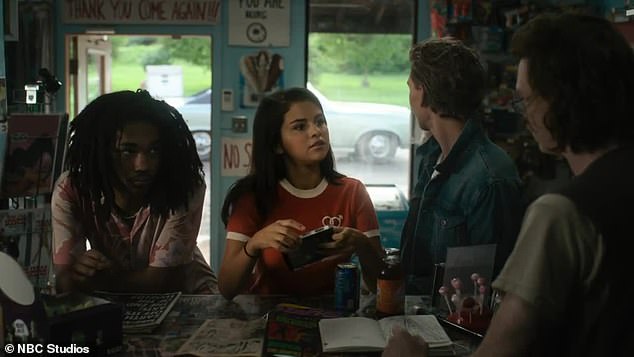 Wrapping up her press appearances, the Bad Liar singer sat down with Jimmy Fallon on at the start of the week, where she explained the well-known photo of her and Murray at the Cannes Festival this year.

In the picture, the Lost In Translation actor is seen leaning down to whisper something into his co-star’s ear on the red carpet for the film’s festival showing.

The brunette explained the image admitting that it ‘kind of looks weird,’ but that really Bill was simply joking around with her.

‘But he was just saying dumb things, like he would just lean in and be like, “You look great tonight,”‘ Gomez began.

‘And then he’d look back seriously and be like, “Where are you from?” And I would just sit there, and I’m trying to be poised. It was fine,’ she added.

‘That’s what he did all the time. In press conferences, he’d try to hit me with things. Yeah, it’s just he’s fun. He’s a big kid,” she added. 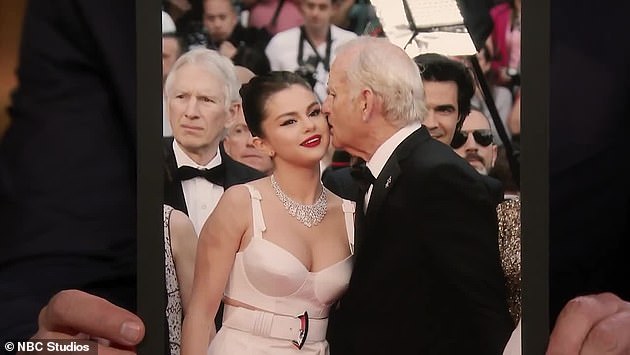 Whisper: During an appearance on The Tonight Show Starring Jimmy Fallon on Tuesday, the actress was asked what her 68 year old co-star said to her

Selena also recently made headlines when she deleted the last picture of her ex, Justin Bieber from her Instagram account.

The two called it quits for the final time shortly after the now deleted picture was first posted – in March 2018.

Quickly after that, the Cold Water singer rekindled his romance with former flame and now wife, Hailey Baldwin, 22. 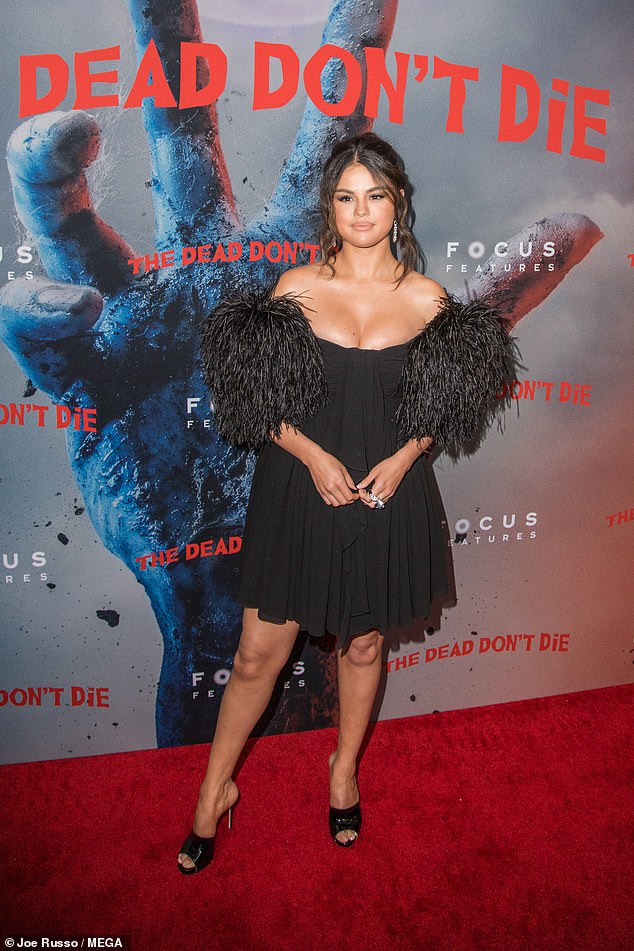 Movie star: Where Selena is headed to next is unknown, but her media tour for the upcoming film The Dead Don’t Die, which is out today, has kept her busy as of late; pictured on June 10 in NYC at the premiere of The Dead Don’t Die

Pamela Anderson reveals she does not anticipate Adil Rami to like her if she loses her seems
Mel B 'under police investigation after being accused of hitting male model'
Iggy Azalea looks edgy in a black leather jumpsuit and extravagant bonnet
Khloe Kardashian invites best friend Malika Haqq to Cleveland in newest KUWTK teaser clip
Justin Timberlake proves a true Man Of The Woods as he tosses axes in sync with wife Jessica Biel
Strictly 2019: Katya Jones flashes her bra in a semi-sheer blouse
Rita Ora leaves her flat in London in the company of her video director
Cher Lloyd fears for her father as he is hospitalised twice during pandemic