We haven’t heard a peep from Boris in public for quite a while. Ever since ‘s weepy resignation speech last month, he’s been under orders to keep schtum. Fermez la bouche has been the ‘Back Boris’ strategy.

Yesterday, his campaign finally began in earnest. His performance was polished. Professional. Devoid of the customary slapstick. Heck, it was actually bloody dull.

I know, I know. This is the sensible thing for him to do. Currently streaking ahead in the polls, the contest remains his to lose.

But let us be honest. When you pitch up at Lord’s to watch Ian Botham bat, you expect him to swing the willow not block every delivery.

Our venue was Carlton House Terrace behind London’s Pall Mall. Such was the interest, this usually genteel London street was transformed into a rolling maul of paparazzi, television crews and other assorted vermin.

Inside, the gathered press corps sat in a cramped anteroom, sweltering in the muggy mid-morning heat. 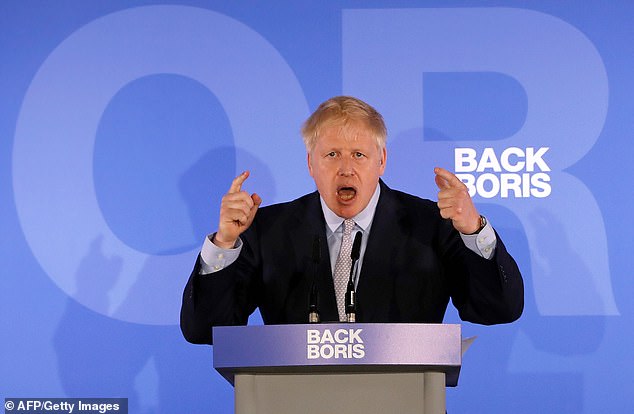 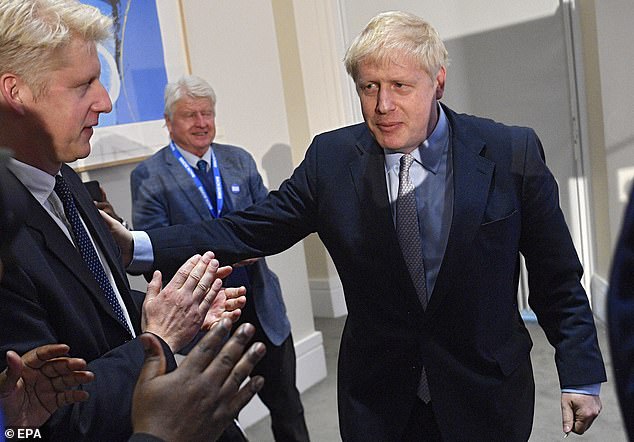 Our host was running late. Nowt new there. Geoffrey Cox did the introductions, the Attorney General’s voice, as ever, as pleasing and aromatic as a fine Havana. Boris, he drawled, was the only man capable of seeing off the threat of Nigel Farage and Jeremy Corbyn.

The familiar custard mop even bore the faint trail marks of a comb. He seemed nervy to start with.

Dry round the mouth. He wasn’t helped by an idiot around these parts known as Mr Stop Brexit hollering away outside in protest.

Down in the front row were a bevy of female supporters, Liz Truss, Nadine Dorries and Priti Patel, their eyelashes fluttering in unison: ‘Gizza job, luv.’

We heard mainly about Boris’s time as London Mayor, reeling off statistics in a statesman-like manner about lowering crime rates.

His stint in City Hall, he said, gave him a unique insight into Labour’s London cabal and their fondness for ‘lefty South American caudillos’.

Phrases like that reassure you that he does at least write a lot of this stuff himself.

After he finished, he said he would accept a measly six questions. Bah! C’mon Boris – if you want to be PM you need more spine than that. 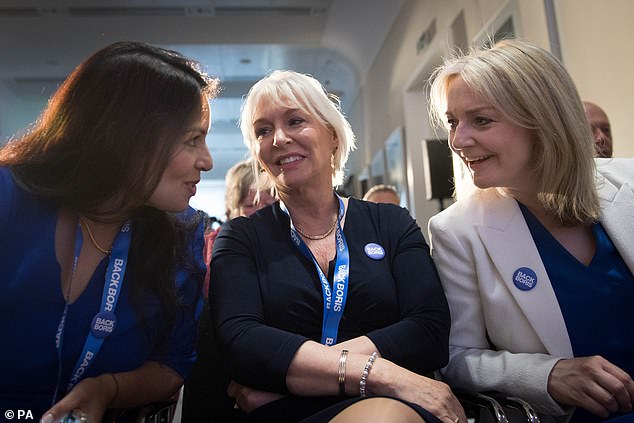 There were inevitable briny queries about his trustworthiness. Here the old Boris returned. The hair rubbing, the ‘Ummms’ the ‘Ahs’.

Mainly he responded with waffle. One question from this newspaper about past cocaine use he managed to turn into a rally about free market conservatism.

Deflected, in other words, like a true politician. But the whole point of Boris is that he is meant to be a politician like no other. Take that away from him and what’s left?

Down the road at Millbank tower, Sajid Javid wrapped up the final launch of the week. Hovering by the lift as I shook off my sodden galoshes, ex-SNP leader Alex Salmond and former Labour rabble rouser George Galloway. Not invited, thank heavens.

Their employer Russia Today merely inhabits the same building. Poor Saj. His campaign seems to have been cursed from the off.

A Commons vote to block No Deal meant he was delayed over an hour. A gentleman to his bootstraps, we were generously kept, fed and watered until his arrival.

He was introduced by bubbly Scots Conservative leader Ruth Davidson. ‘It’s not a phrase I use very often… but he’s the man for me,’ she joked. 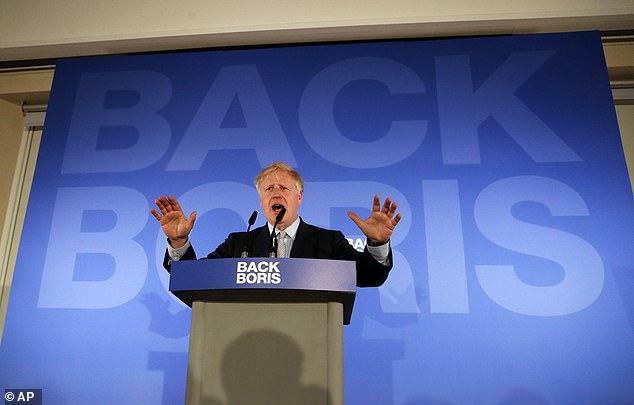 Merriment all round. Of all the candidates, the Home Secretary should be the man Boris fears most.

His backstory is pure political napalm. A son of a Pakistani immigrant who defied National Front bullies before earning squillions in the City then marrying the love of his life. But he just doesn’t execute it.

Don’t get me wrong, this was the best speech I have heard ‘The Saj’ make. It was honest. It was heartfelt.

But he just falls short of greatness, presentation-wise. His performances have barely kicked on since he entered the Home Office over a year ago.

He reminds me of one of those X Factor contestants who never quite makes that step up. Cabinet material for sure. Just not the one for Downing Street.

PS: Between all the hustings hoo-haa, I managed to briefly pop my head round the corner on PMQs. Drab stuff, though one minor observation.

It is not unusual in these sessions to see Amber Rudd and Matt Hancock giggling together like a pair of truculent teenagers. Yesterday they gave each other a wide berth.

A mischievous flunky suggests Hancock was ‘spitting venom’ when Amber came out in support of Jeremy Hunt’s leadership campaign on Monday rather than his. Surely the energetic Health Secretary is too weighty a creature to bear a grudge?