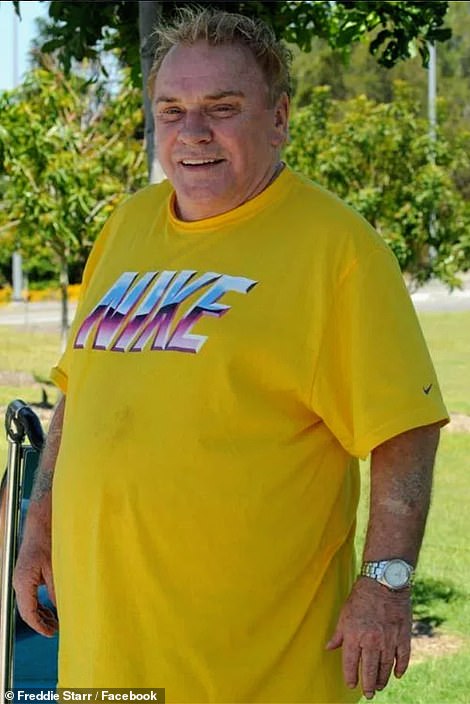 Freddie Starr, pictured in a post on his fan page in January

Fans, family and friends of Freddie Starr will pay their respects at his funeral today after it was revealed his coffin will bear the words: ‘Return to sender’.

The comedian, who became a household name in the 1970s, died aged 76 at his home in Spain last month – and his funeral will be held at Prescot Parish Church in Merseyside, near his birthplace of Huyton. A statement on the Freddie Starr Official Facebook page said the service would be followed by a private burial for family.

The repatriation and burial are being paid for by funeral director Michael Fogg after fears the comedian would have a pauper’s funeral. Sheffield-based Mr Fogg had suggested earlier this month that the funeral would be held in a theatre, but it will instead be in the church.

Mr Fogg posted two pictures of the coffin on Facebook today, which showed it has been marked with two phrases – ‘Liverpool Legend’ and ‘Return to Sender’.

In the post, he wrote: ‘Today we conduct the funeral for Freddie Starr. To have cared for one of this country’s best entertainers has been such a privilege, I can’t put it into words. We will be leaving our funeral home in Sheffield at 09.15am and making our way to Liverpool.

‘To lay Freddie to rest with his beloved mother. Rest in peace Freddie and thank you for everything. Feel free to leave a message and share this post. A safe journey to everyone traveling to the service today. Michael x.’

Two of Freddie’s ex-wives are expected to attend – Sophie Lea, 38, his fourth wife who split from the star in 2013 but remained married to him until his death, and Donna, his third wife to whom he was married twice. 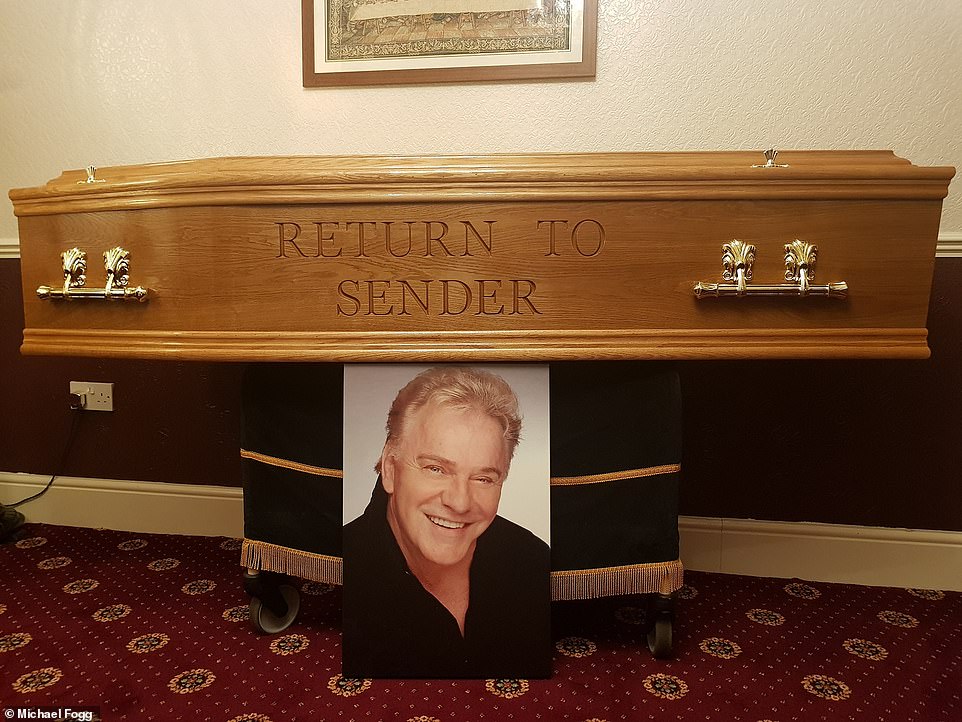 The repatriation and burial are being paid for by funeral director Michael Fogg, who posted a picture of the coffin online today 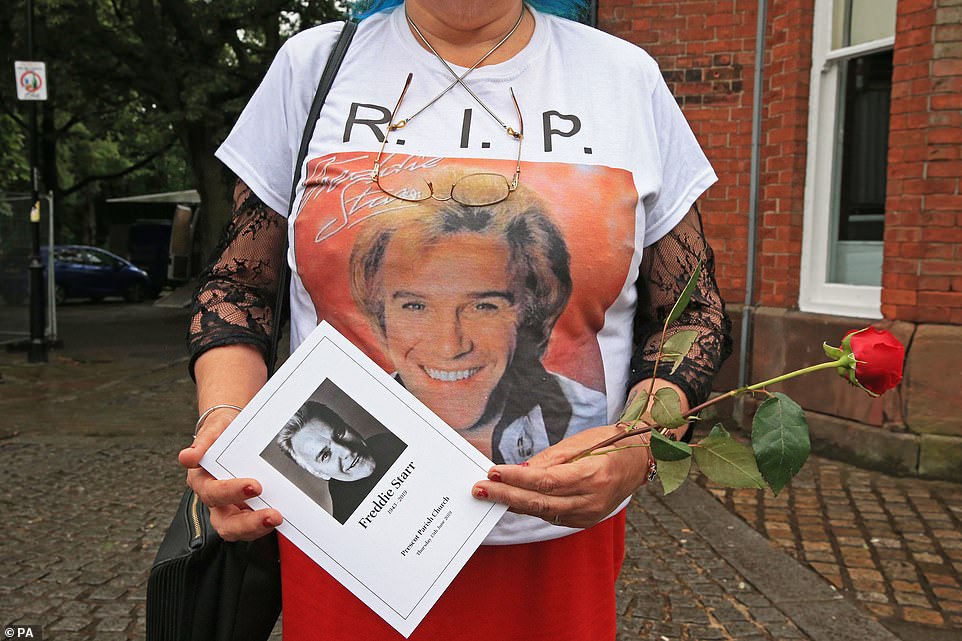 Delia Cairney, who travelled from Gloucestershire, wears a Freddie Starr T-shirt before the comedian’s funeral at Prescot Parish Church in Merseyside today 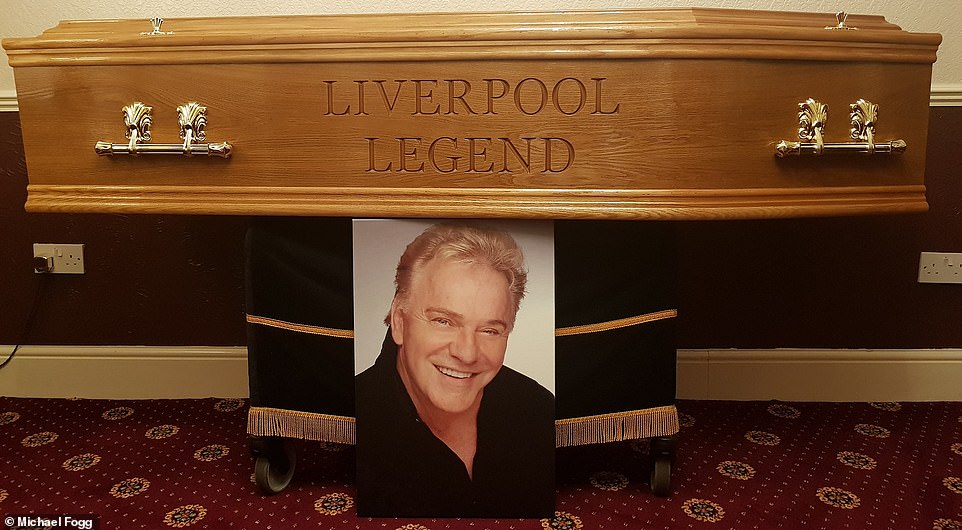 Mr Fogg posted pictures of the coffin on Facebook today, showing it has been marked with the phrase ‘Return to Sender’ 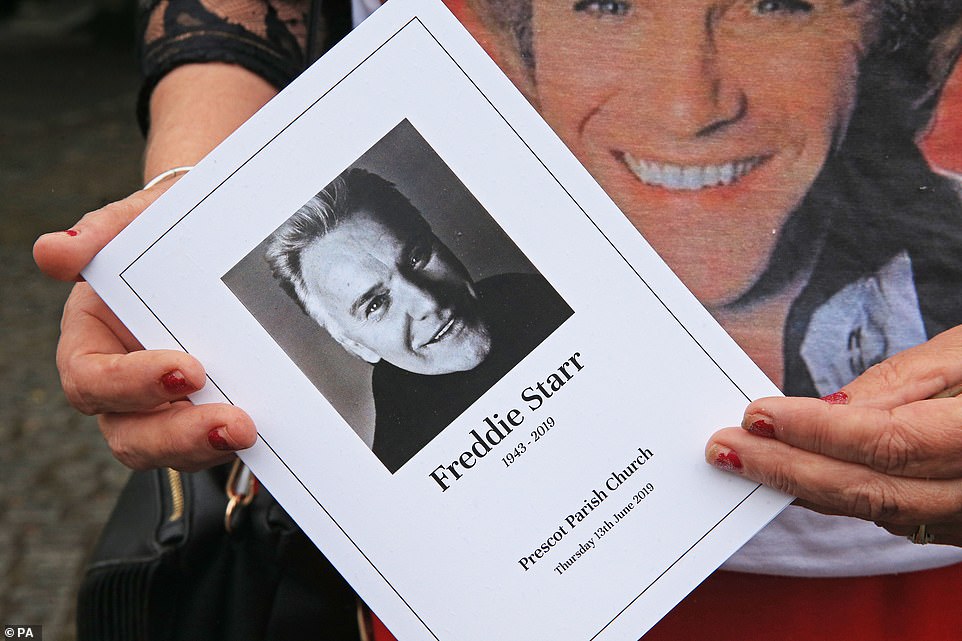 Some of his six children; Carl, Stacey, Donna, Tara, Jody and Ebony, are also expected to be at the funeral today.

Starr died of a heart attack in a £380,000 apartment at Mijas in Malaga on the Costa del Sol, which he shared with his Bulgarian housekeeper Nely Georgieva, 47, and four cats, one of whom was also named Freddie. 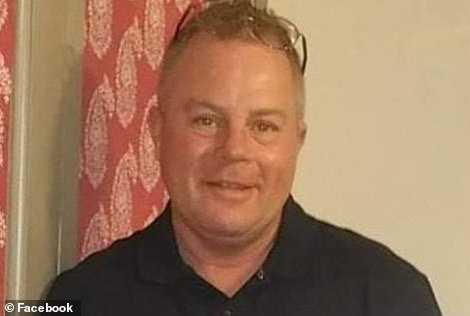 Funeral director Mr Fogg said: ‘To have cared for one of this country’s best entertainers has been such a privilege’

The body of the late comedian was found by Ms Georgieva and it was repatriated to Britain on May 20.

Starr, who died of heart disease, was known by fans for his eccentric and often unpredictable behaviour, rising to national prominence after appearing on Opportunity Knocks.

His later years were marred by allegations of historic sexual assault and an ultimately unsuccessful defamation lawsuit that cost him a rumoured £1million. Starr liquidated his assets and left for Spain.

Among the fellow comedians who paid tribute following his death was Jim Davidson, who tweeted: ‘Just heard the news. Freddie Starr was the greatest.’ Actor Bobby Davro called Starr the ‘most naturally funny man I’ve ever seen’.