An ‘extraordinarily well-preserved’ Bronze Age farm found in Britain only operated for a year before being destroyed by a ‘catastrophic’ fire, suggests a new study.

The Must Farm site in Cambridgeshire drew worldwide attention in 2016 when it was hailed as ‘Britain’s Pompeii’ or the ‘Pompeii of the Fens’.

Now archaeologists from Cambridge University’s Archaeological Unit have come up with a definitive time frame to Must Farm’s occupation and destruction. 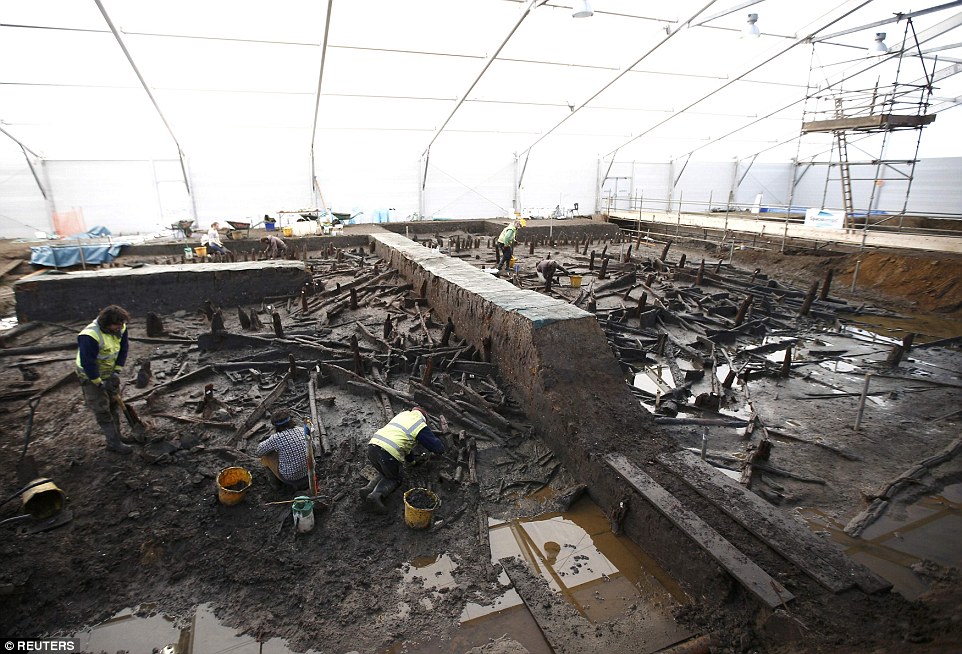 The settlement consisted of large circular wooden houses built on stilts. It appears the buildings collapsed in a fire and plunged into a river where the timbers were preserved in the silt (pictured)

‘It is likely that the settlement existed for only one year prior to its destruction in a catastrophic fire,’ said site director Mark Knight.

‘The short history of Must Farm, combined with the excellent preservation of the settlement, means that we have an unparalleled opportunity to explore the daily life of its inhabitants.’

He said Must Farm is located within the silts of a slow-flowing freshwater river, with stilted structures built to elevate the living quarters above the water.

Prior to the building of Must Farm, a causeway was built across the river.

‘Although excavation of the river sediments associated with the causeway was limited, stratigraphically we can demonstrate that the that the causeway and the settlement are chronologically unconnected,’ Mr Knight said.

‘The people who built the settlement, however, would have been able to see the rotting tops of the causeway piles during the time of the settlement’s construction.’

Excavations undertaken between 2009 and 2012 revealed the remains of nine logboats in the ancient river channel, along with fish weirs and traps, providing further evidence of the long history of occupation in the area.

The Must Farm houses are the ‘most completely preserved prehistoric domestic structures found in Britain’, visible as ‘hundreds of uprights or pile stumps, which together define the outline and internal settings of at least five stilted structures’ enclosed by a palisade with an internal walkway. 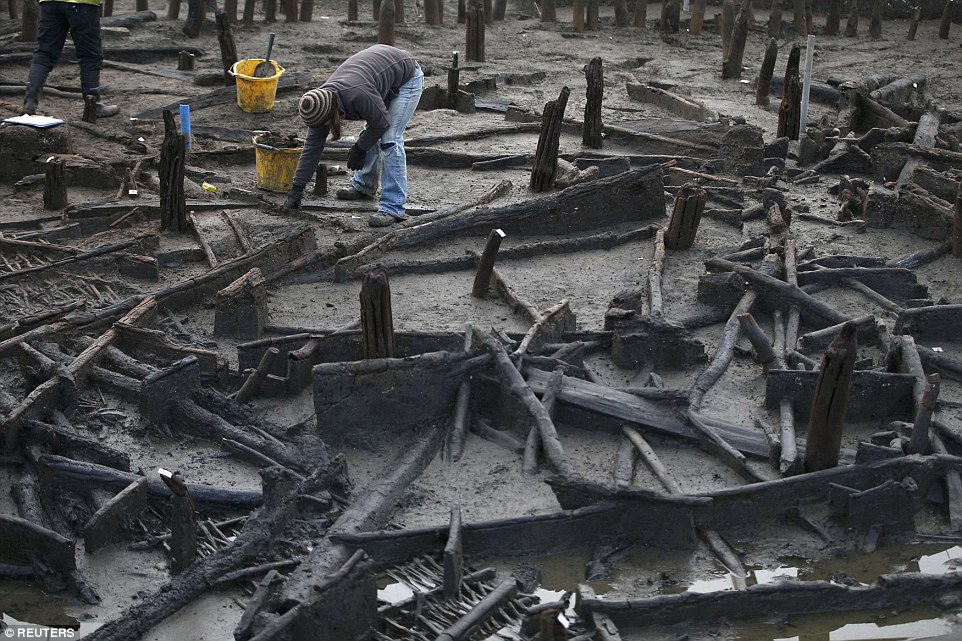 The team believe the buildings were set ablaze nearly a century after they were first built but have yet to discover if the fire was set deliberately or was an accident. They say it is possible the fire may have been started carried out by attackers 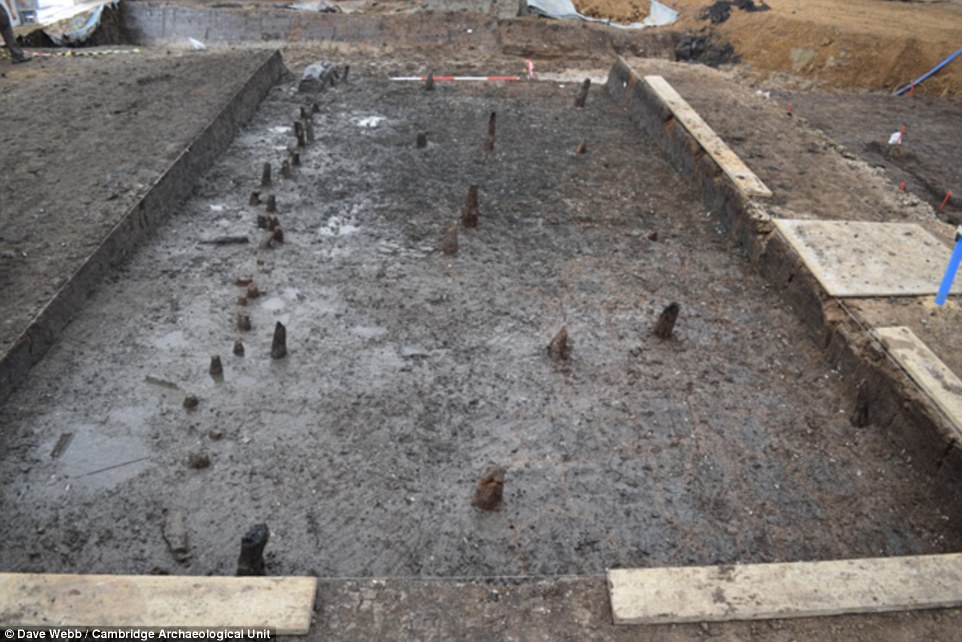 The fire that burnt down the ancient house was a blessing for archaeologists as it enabled the site to be exceptionally preserved. Pictured is the settlement before the excavation began

The research team said that the architecture reflects the conventions of the prehistoric British roundhouse, albeit located in an unusual wetland setting.

Uniquely, there is no evidence that the structures were ever repaired and analysis of the timbers has suggested that the timbers were still green when destroyed by fire.

The researchers said that the structures collapsed vertically and the heavy roofs brought everything down with them into the sediment of the channel.

The researchers said that Must Farm represents a ‘routine dwelling’ in a rarely excavated fenland setting, which is ‘incredibly valuable’. 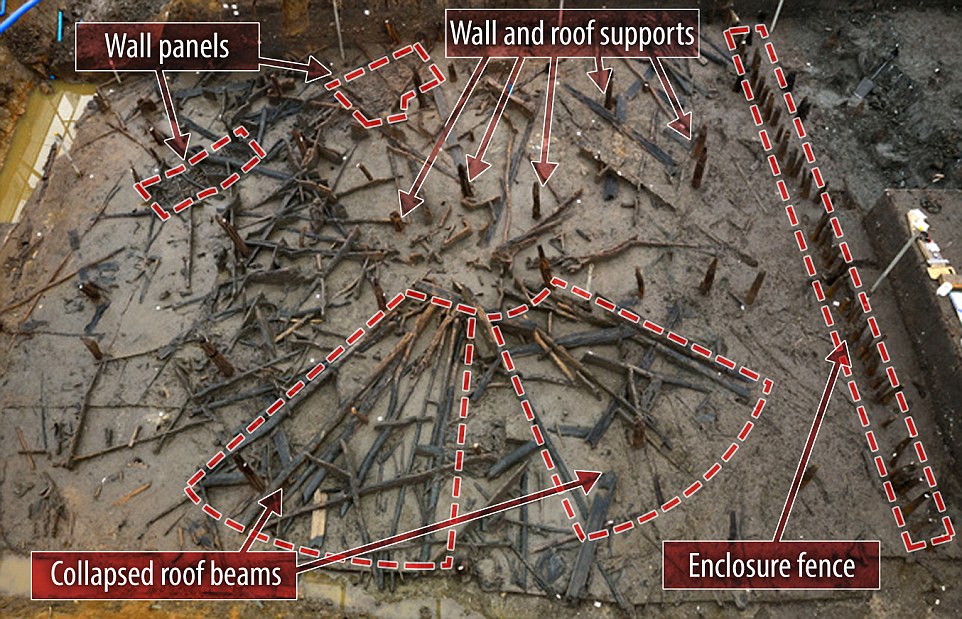 The Must Farm Quarry site revealed the internal and external structure of the house during the excavation. Archaeologists encountered upright poles that used to support the building’s walls and roof, wall panels, collapsed roof beams and a row of poles arranged for a fence 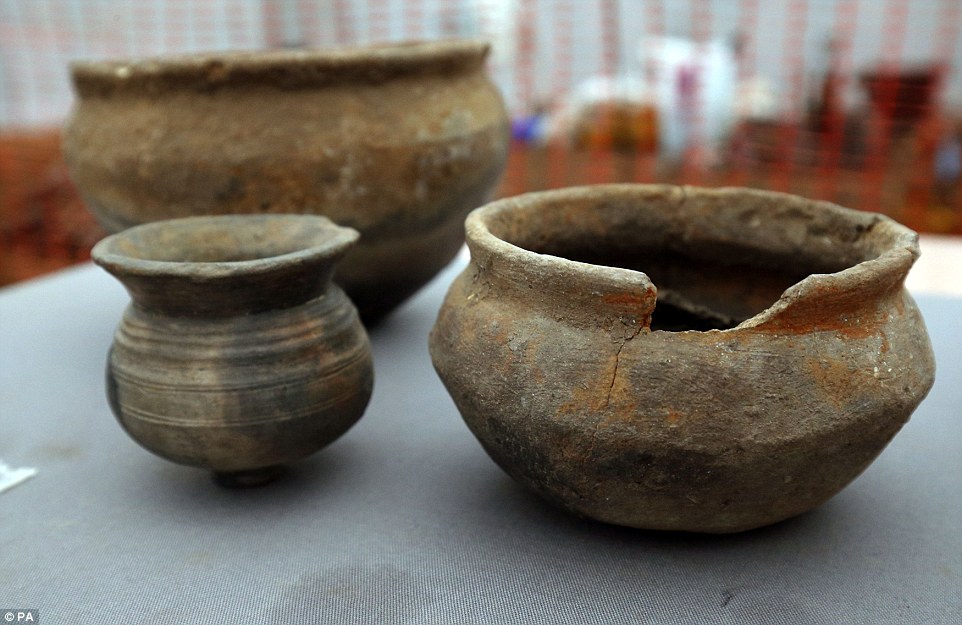 These pots were recovered from the Bronze Age settlement at Must Farm Quarry in Cambridgeshire.The site includes an unusually high amount of artefacts, and their style is similar to what was found at the time in continental Europe 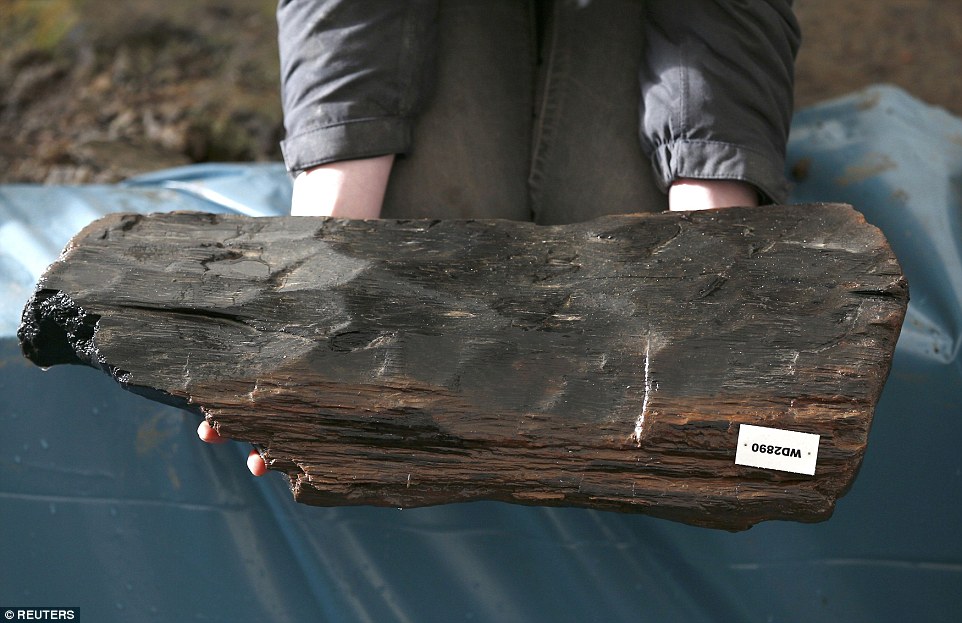 Much of the timber from the houses remained where it fell following the fire as the sluggish river encased it in silt. An archaeologist holding a piece of timber from one of the houses is pictured. Researchers say the buildings are the best preserved Bronze Age dwellings in Britain

They said some of the plant and animal remains found at Must Farm are rare for that period in British prehistory and include pike bones, sheep and goat dung as well as entire charred and currently unidentified tubers.

Most of the food sources, which include wild boar and deer, were not from the wetlands.

‘We are only in the early stages of investigating the vast quantity of material from Must Farm, material which promises to reveal many more fascinating aspects of life in the fens 3,000 years ago,’ Mr Knight said. 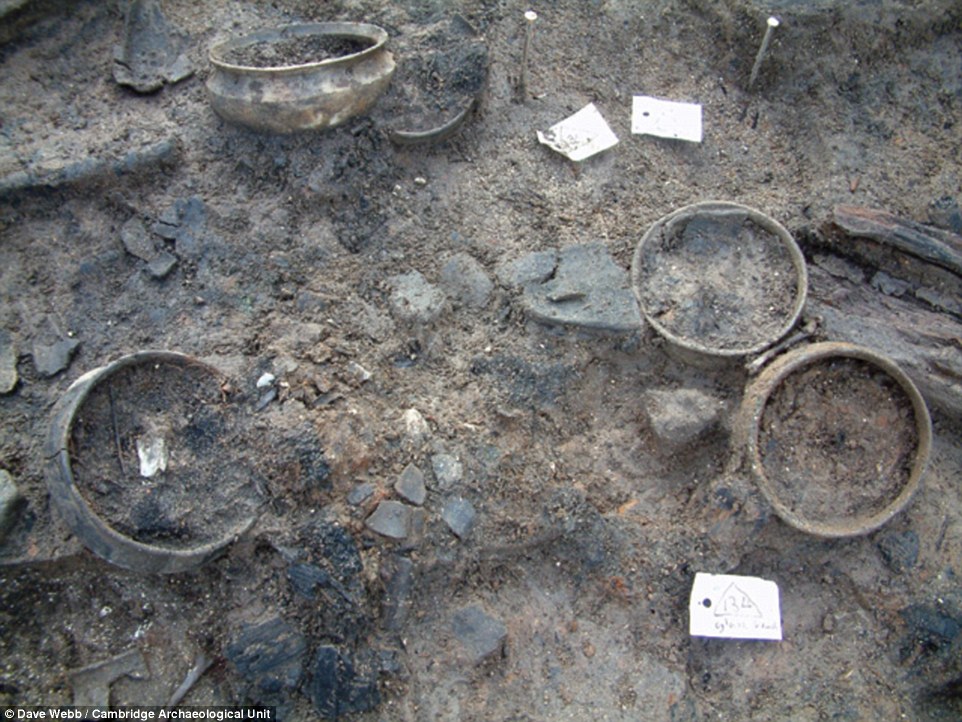 Pots discovered in the archaeological dig at Must Farm Quarry in Cambridgeshire. The find is expected to transform our understanding of the Bronze Age 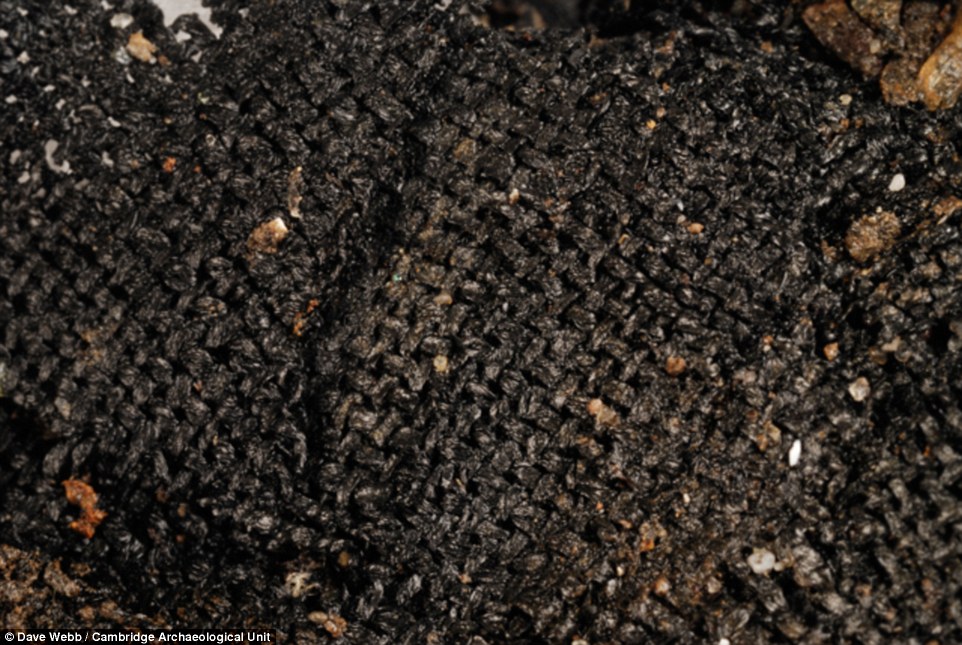 This piece of charred fabric was recovered at the Must Farm Quarry site. The house was destroyed in a fire and archaeologists now hope to figure out whether that was an accident or if the site was intentionally set ablaze

Police find stolen doughnut van, share treats with...
US warns May that only allies with 'trusted networks' can access secrets in Huawei spying row
Explosive-laden drones attack oil pipelines in Saudi Arabia in 'act of terrorism'
Iconic Sydney Opera House is struck by a massive bolt of lightning
Mother shares transformation after using a £18.99 cream to heal her lip scar
Italian PM makes impassioned plea for 16 million to obey quarantine
Coronavirus UK: 1 in 3 infected unreachable via test and trace
State-owned factories have capacity to churn out FIVE MILLION face coverings a week