A mom has been left ‘ashamed’ and ’embarrassed’ after being asked to leave a public pool in City for trying to breastfeed her ten-month-old son.

Misty Daugereaux claims lifeguards and the manger of Nessler Family Aquatic Center told her to ‘cover-up or leave’ because she was ‘breaking the rules.’

After the mom-of-two refused to leave on Sunday, Texas City Police Department were called and they have since released .

They pool manager tells the cop that ‘outraged’ Daugereaux had ‘cussed out’ a male lifeguard. 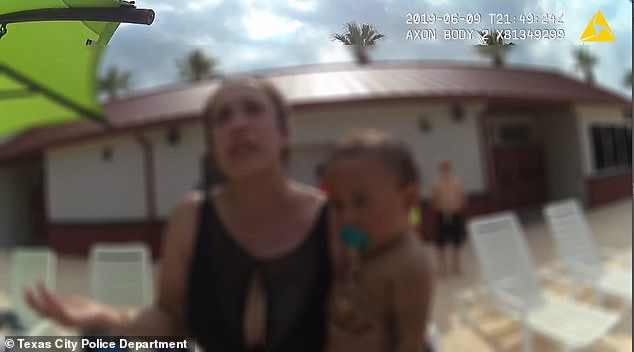 Misty Daugereaux claims staff at Nessler Family Aquatic Center told her to ‘cover-up or leave’ as she tried to breastfeed ten-month-old son Maxx, pictured above in police body cam footage 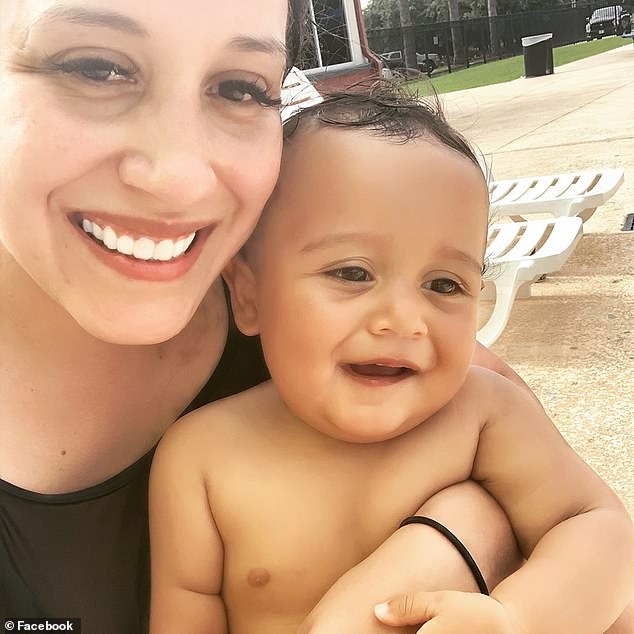 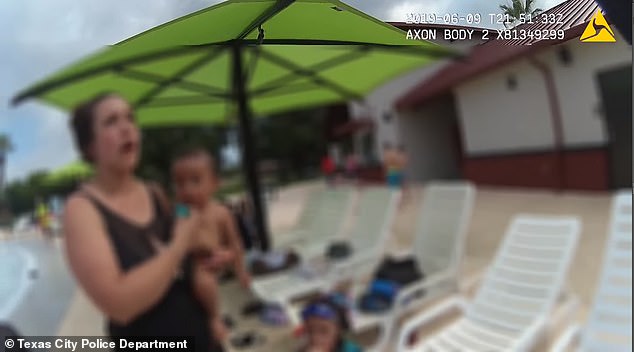 On body cam footage released by Texas City Police Department, the officer talks to the upset mother and public pool staff about the incident

Approaching the mother, who is cradling her son Maxx to her chest, she told the officer, ‘I started crying I was so emotional’ and ‘I don’t stand for a lot, but I will stand for that.’

Daugereaux told the officer she had asked to see the park rules to find out how she had broken their rules, but was refused.

She said: ‘I’m conscious enough to know I don’t want every man in the pool looking at my boobs.

‘But when you have a ten-month-old who doesn’t take a bottle, I’m going to feed him and I’m not being disrespectful.

‘I don’t want to cause a scene but I’m going to feed my baby.’

Later when speaking to the lifeguard and manager, they claim she had both breasts out and they wanted her to leave for her alleged behavior to staff.

They also claimed that they had had as many as seven complaints about her breastfeeding.

While being asked to leave by the officer, Daugereaux adds: ‘I don’t understand how this is right… It’s embarrassing that I can’t feed my baby.’ 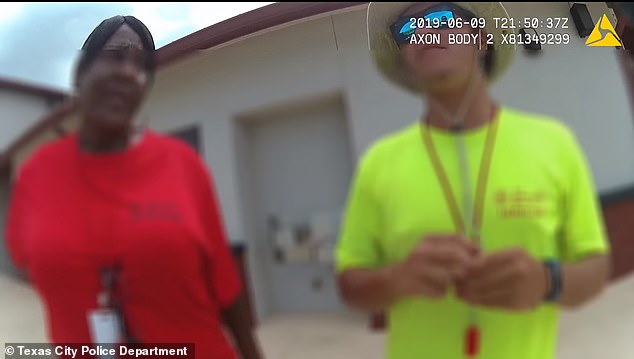 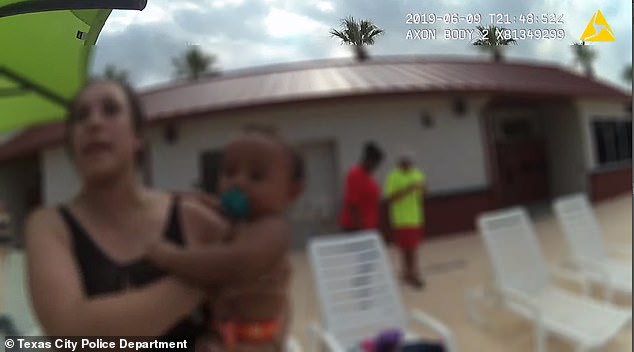 The mom explained that she was ’embarrassed’ and ‘ashamed’ by the encounter, that concluded with her leaving the public pool 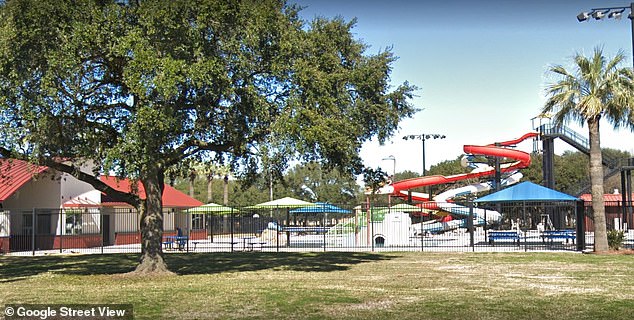 Towards the end of the footage, which has received 76,000 views so far, the officer can be heard insisting to staff that she should have covered-up under a blanket.

Since the incident, the mother has taken to and with the support of a Galveston breastfeeding support group of mothers held a ‘nurse-in’ at the pool on Monday.

The group hoped to raise awareness of the issue faced by many mothers, sporting the hashtag #normalizebreastfeeding.

read:  ‘Out of Milk since ’99 But like a Good Bra Still Supportive!’ 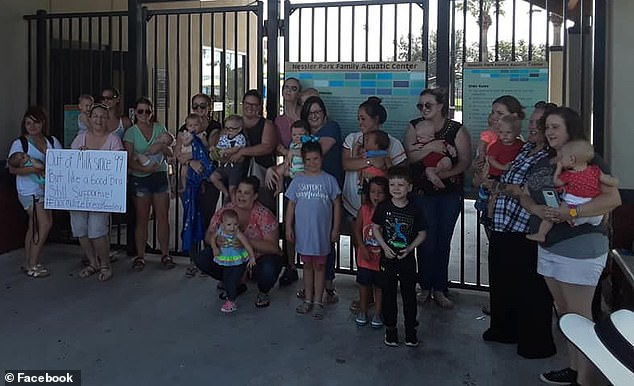 Daugereaux and mothers from a breastfeeding support group gathered on Monday for a ‘nurse-in’ protest, to highlight the incident 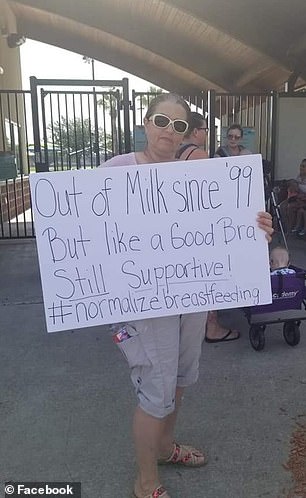 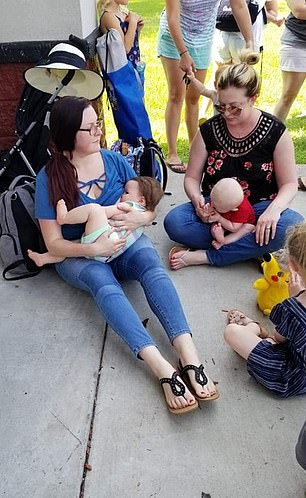 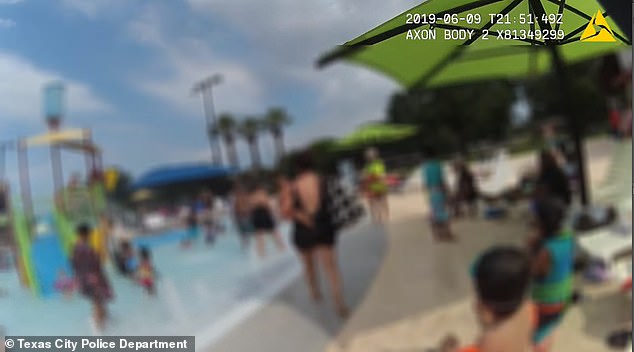 Families gathered at the public pool Nessler Family Aquatic Center, on body cam footage staff claimed that they had received up to seven complaints about Daugereaux breastfeeding

‘I’m so hurt, embarrassed and ASHAMED, that this is what TEXAS CITY STANDS FOR.’

She recalled her four-year-old son’s reaction to the event, she said: ‘Tears pouring down my face. My son asked, Momma why won’t they let you feed MAXX?

‘I was alone not wanting to cause a scene my kids, to the momma that stood up for me THANK YOU!’

Since the of outpouring of messages online coming to the mother’s aid, she expressed her gratitude.

‘I feel powerful, loved and supported more than I could have ever imagined,’ she told  during the ‘nurse-in’. 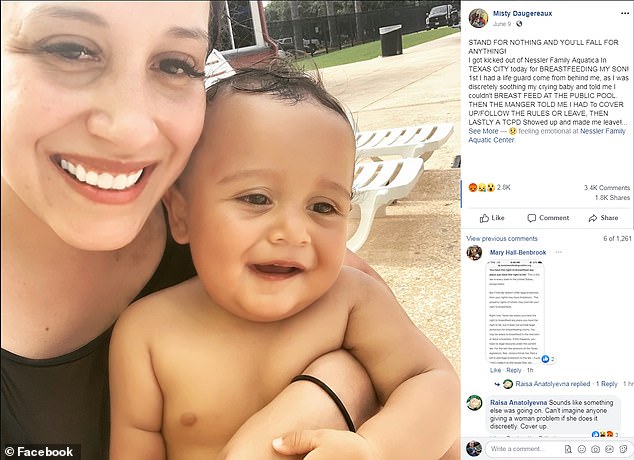 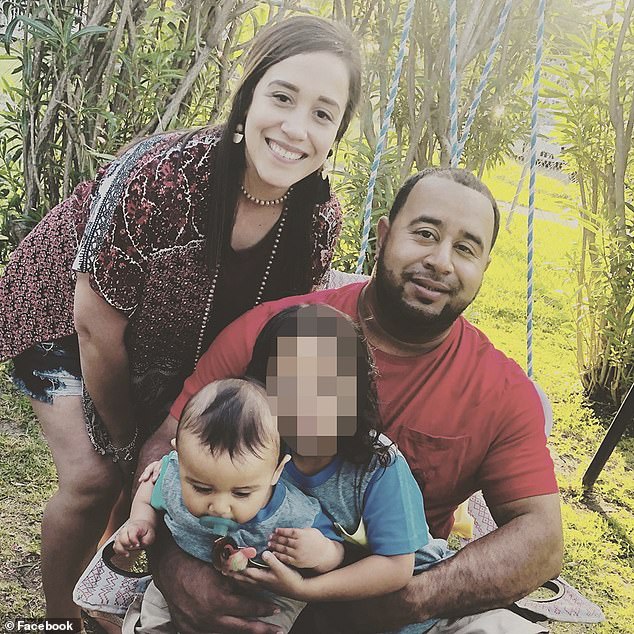 Daugereaux (left) with her family, she spoke out online about her incident at a public pool in Texas

According to , a mother is entitled to breastfeed her baby anywhere that she is allowed to be present, citing it as an ‘important and basic act of nature that must be encouraged’.

In a statement released by the City of Texas City, they would be reviewing the ‘nursing concerns’ and how it was addressed by staff.

They wrote: ‘We apologize to Misty Daugereaux as it is clear she was offended by how she was treated at our City Facility.

‘City policies and procedures will be reviewed and revised as deemed necessary.

‘Any deficiencies regarding our employee’s actions will be addressed with further training.’

The post by Daugereaux explaining the incident online, has received over 1,800 shares and 3,400 comments so far.

One user, Jasmine Skyy, wrote: ‘Shame on them! I’m sorry that you had to experience that. Wish I was there to help defend you.’

Another Helen Sanchez Willner commented: ‘They should be ashamed of themselves because a mother should be able to nurse their baby anywhere. This is why God gave women the ability to do this.’

Chuck Perry wrote: ‘Breastfeeding is actually one of the most natural things there is. Before there were bottles, there were “sugar t***” for mothers who could not make milk, but that was the ONLY exception before we became so sensitive.’

Miami Dolphins huge receivers Kenny Stills and Albert Wilson take a knee throughout the nationwide a...
Huge £600million cruise ship is set to bring Chinese tourists to the high seas
Royal photographer Tim Rooke reveals surprising difference between capturing Meghan and Kate
Attacker used a SCOOTER to beat a California woman to death as bystander tries to intervene
Simone Biles makes history as she wins her 21st world medal
Woman, 65, who was dying of liver cancer was given a hepatitis C-infected organ that saved her life
Jeffrey Epstein's graphic autopsy photos reveal bloodied neck
Loyal pet dog 'waits on a bridge for four days after witnessing its owner jumping into a river'