There is ‘no replacing’ Lisa Vanderpump.

The 58-year-old queen of reality TV spent her weekend celebrating LA Pride and advocating for LGBTQ youth in Los Angeles after she exclusively told DailyMailTV she was quitting the Real Housewives of Beverly Hills.

Meanwhile, Andy Cohen took to his radio show to clear up some rumors about Kathy Hilton possibly replacing Lisa on the series. 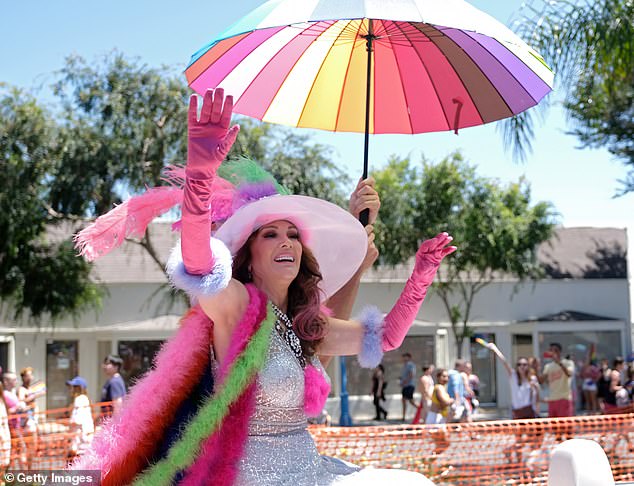 Celebrate! Lisa Vanderpump was all smiles as she rode in the LA Pride Parade this weekend while Andy Cohen took to his radio show to deny rumors that Kathy Hilton is replacing her on RHOBH on Monday

Lisa and her Vanderpump Rules co-star Lala Kent rocked a rainbow of hues at the LA Pride Parade where the former Housewife was given the royal treatment.

The Pump owner was a featured guest in the parade and waved at Pride revelers while perched on the back of a white Rolls Royce convertible.

Lisa got a ride to the luxury car the the arms of a burly man who carried her to her destination.

The star wore a long embellished silver gown and a matching hat that was adorned with a rainbow of feathers. 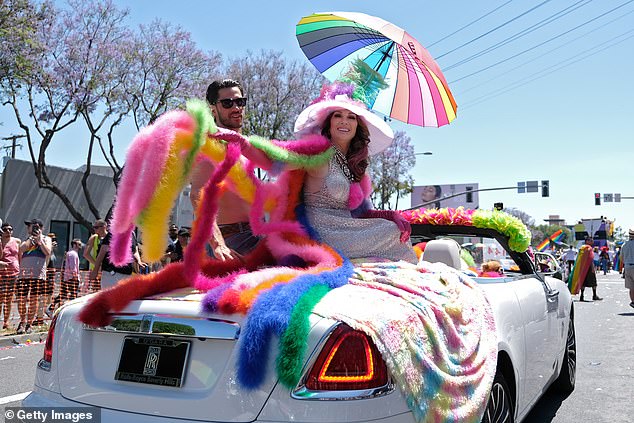 LA Pride! Lisa was a featured guest in the LA Pride Parade and waved at revelers while perched on the back of a white Rolls Royce convertible on Sunday 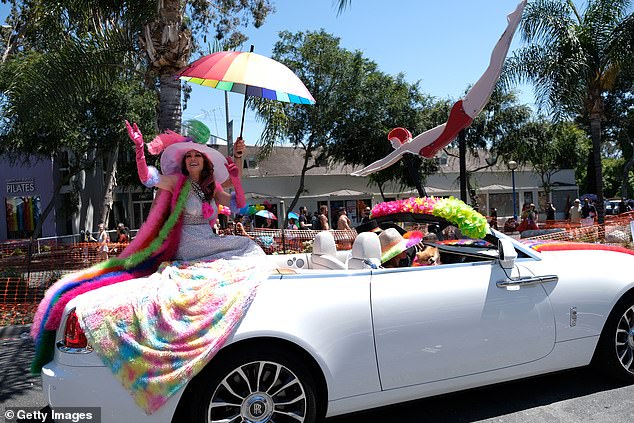 Activist! Lisa is a long time supporter and advocate for the LGBTQ community and The Trevor Project 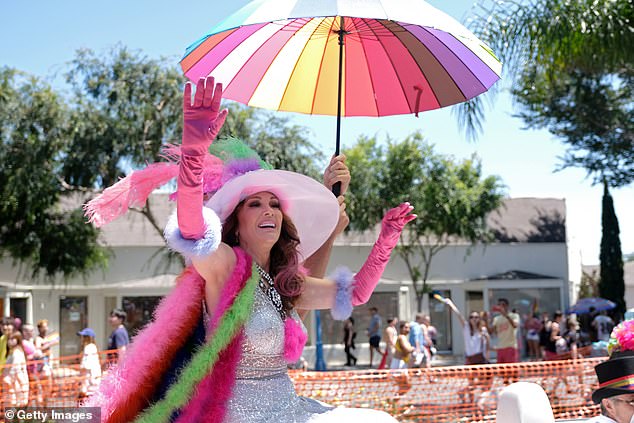 Celebrate! The star wore a long embellished silver gown and a matching hat that was adorned with a rainbow of feathers

She paired the look with hot pink satin gloves with periwinkle marabou cuffs and a long, flowing rainbow cape made of marabou boas.

Her husband Ken Todd rocked a sleek all-black look that featured a rainbow logo for their hot spot Tom Tom and some fun rainbow feather adornments.

Lala Kent was spotted at the celebration putting on a cheeky display in super-short denim cut-offs, wacky printed thigh-high boots, a black bustier and an emerald colored wig.

Lisa’s appearance in the Pride parade came in the middle of some controversy about who may replace her on RHOBH. 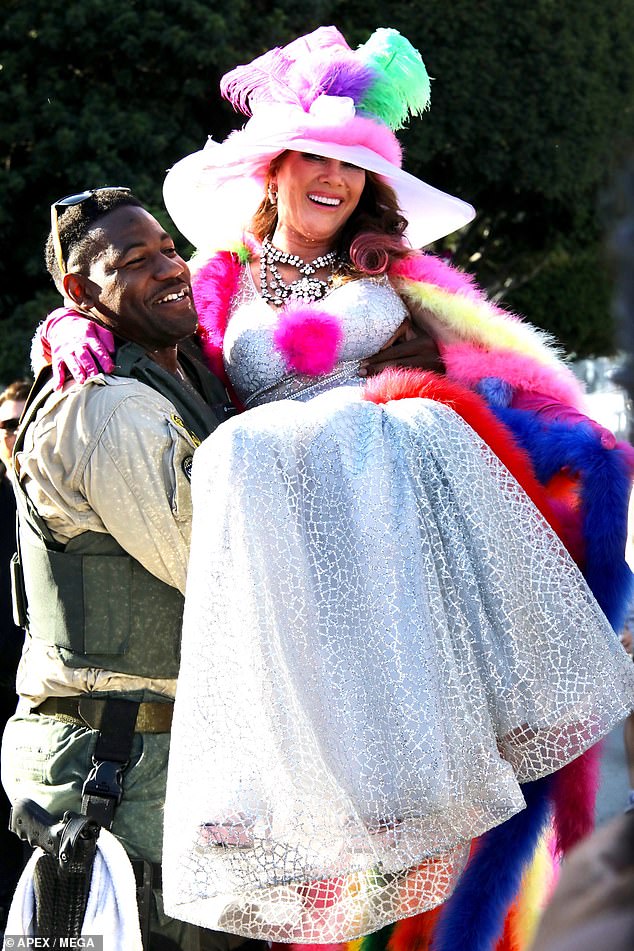 Royal treatment: Lisa got a ride to the luxury car being held the the arms of a burly man who carried her to her destination 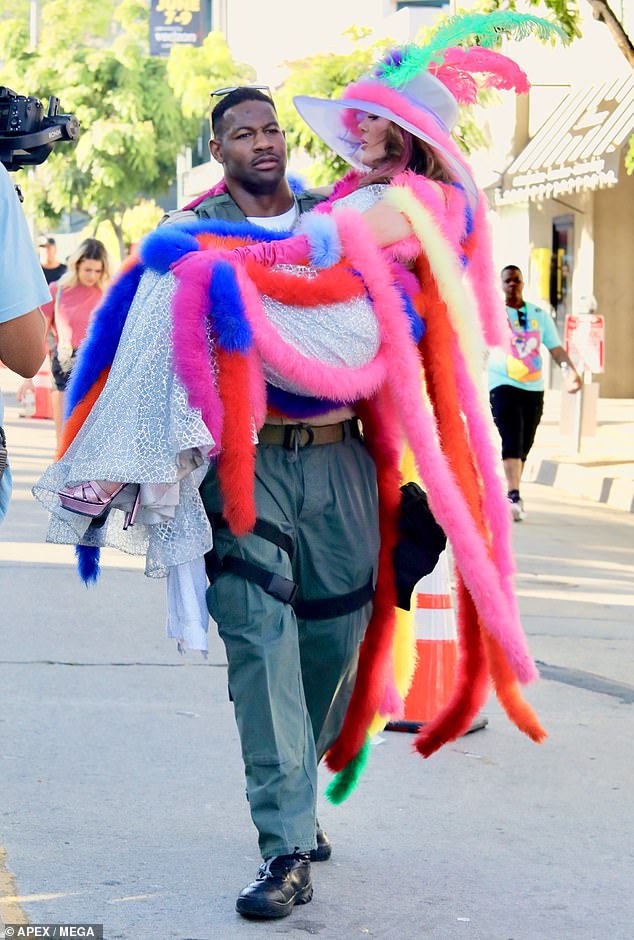 Only in LA! A strapping young man seemed to have no issues holding up the petite reality star 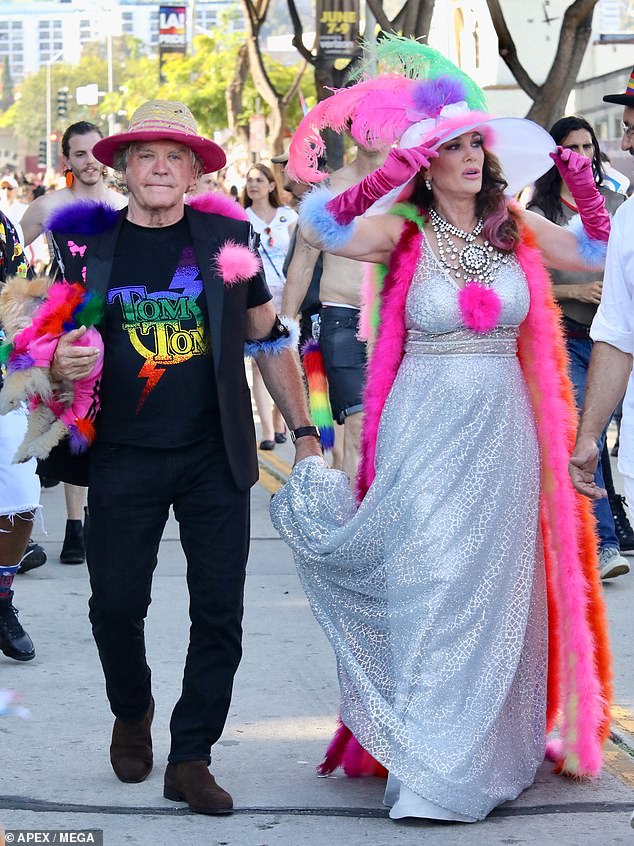 Couple goals: Lisa attended the parade with her husband Ken Todd just days after exclusively telling DailyMailTV that she was quitting the RHOBH and skipping the reunion

On Monday, Andy Cohen took to his radio show Andy Cohen Live on SiriusXM to deny rumors that Kathy Hilton is joining the cast.

Over the weekend Andy Cohen’s best friend Bruce Bozzi sparked the rumors after he posted a snap on social media of the Bravo head honcho and Kathy.

His caption appeared to make it very clear that Paris and Nicky’s mom was in line to fill Lisa’s expensive shoes: ‘Sign on the dotted line… a true diamond.’

Andy insisted on his show, however, that he and Hilton (who happens to be the sister of RHOBH star Kyle Richards) weren’t at dinner together and had simply run into each other.

Star sighting: Vanderpump Rules star Lala Kent was spotted at the parade as well in a cheeky and kitschy ensemble

‘I didn’t post anything,’ Andy said while pushing the blame for the rumors on Bruce.

He then revealed that it was actually Kathy who suggested they had to ‘take a pic.’

Once Andy saw that not only had Bruce posted the photo, but that he insinuated that Hilton might join the show, Andy playfully admonished his friend.

He said: ‘Bruce do you realize what you are going to do right now in Housewives nation?’ 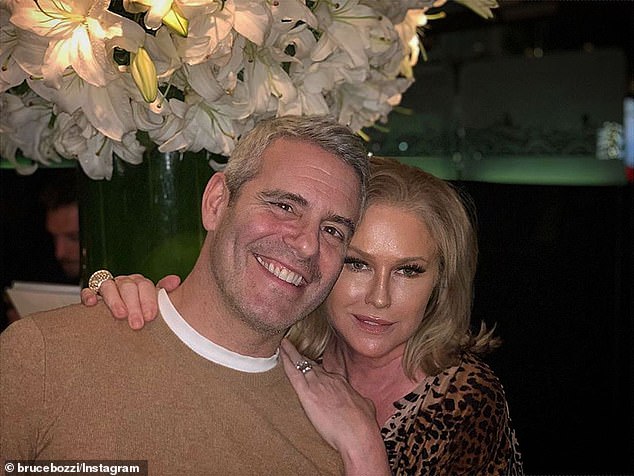 Rumor mill! Andy denied claims that Kathy Hilton would replace Lisa on RHOBH after this photo of the two was posted over the weekend; he called Lisa ‘irreplaceable’ 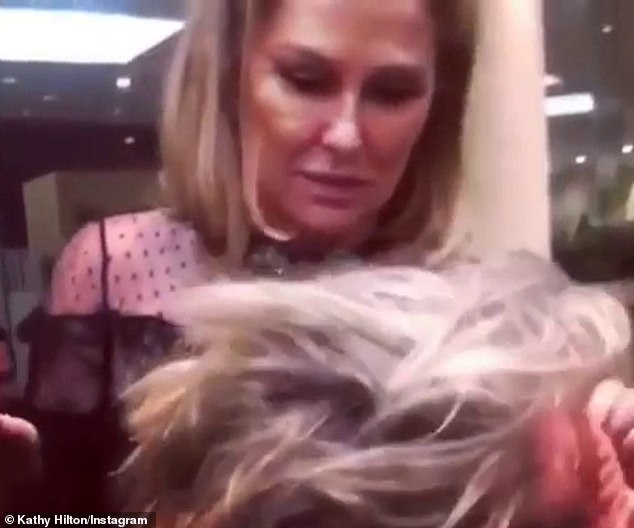 Keeping busy: And Sunday saw Kathy herself deny any speculation. Taking to social media, the mother of Paris and Nicky Hilton shared a video of herself cutting a friend’s hair

Further denying the rumors, Andy said point blank that there have been ‘absolutely no conversations about this possibility’ with Kathy.

He added that Lisa, who he refereed to during the radio show as LVP, was irreplaceable but that he was ‘was amazed by how overwhelmingly positive the response was’ to the Kathy rumors.

And Sunday saw Kathy herself deny any speculation.

Taking to social media, the mother of Paris and Nicky Hilton shared a video of herself cutting a friend’s hair. 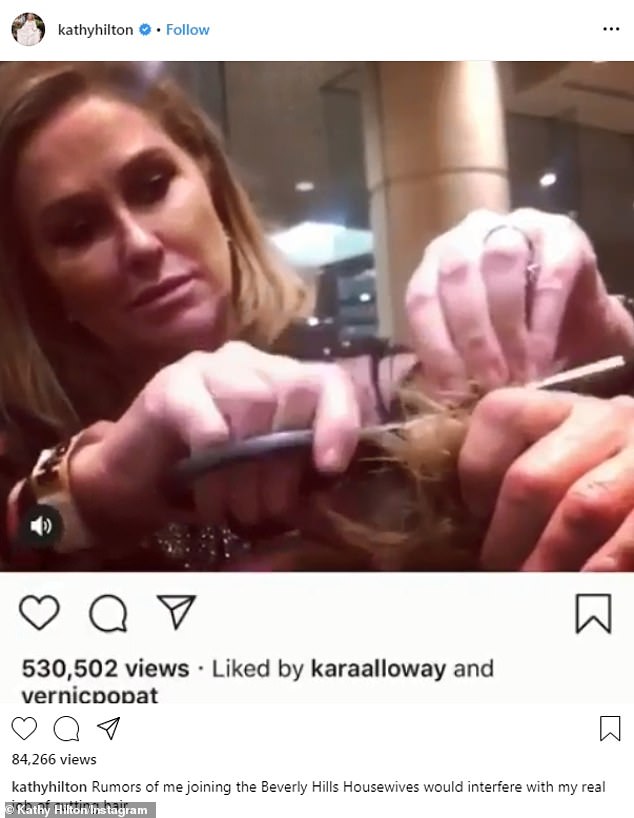 Team Kathy! Taking to social media, the mother of Paris and Nicky Hilton shared a video of herself cutting a friend’s hair and it wasn’t long until fellow celebrities praised her for her clap back

In the caption she hilariously revealed that appearing on the show would interfere with her burgeoning career as a hairdresser.

‘Rumors of me joining the Beverly Hills Housewives would interfere with my real job of cutting hair,’ she wrote.

And it wasn’t long until the comments came in with Kris Jenner writing: ‘Who do I call for an appointment?’ and fellow cast member Lisa Rinna adding: ‘We love you Kathy Hilton!!!’

Andy addressed Lisa’s departure from the Housewives and her absence from the reunion which taped last week. 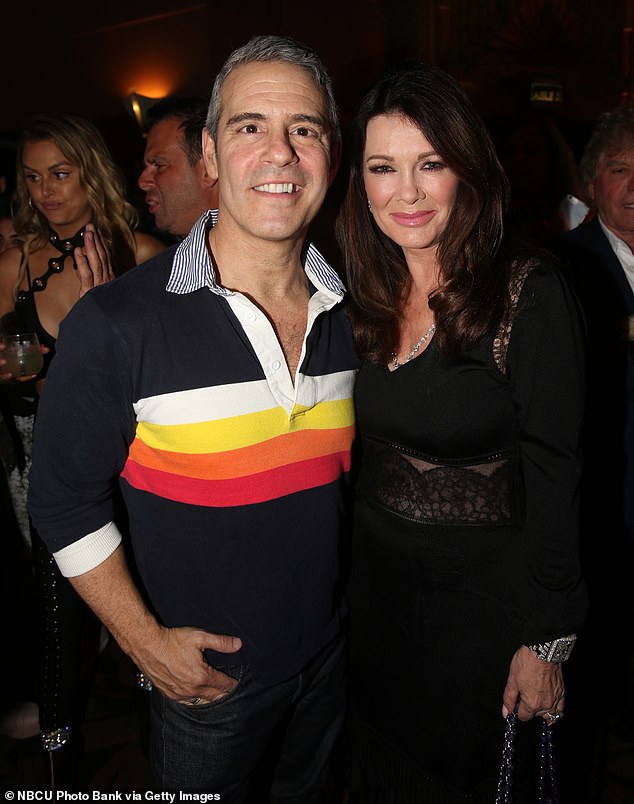 Moving on: Andy admitted he wished Lisa had attended the reunion and said that there have been ‘absolutely no conversations about this possibility [of joining RHOBH]’ with Kathy (pictured in 2017)

He went on: ‘And as for LVP leaving the show, no one will ever replace her. I gotta tell you. And no one can replace her.’

Andy went on to call the Rules star ‘iconic’, admitting that she was the reason he was ‘sold’ on doing the Beverly Hills franchise in the first place. 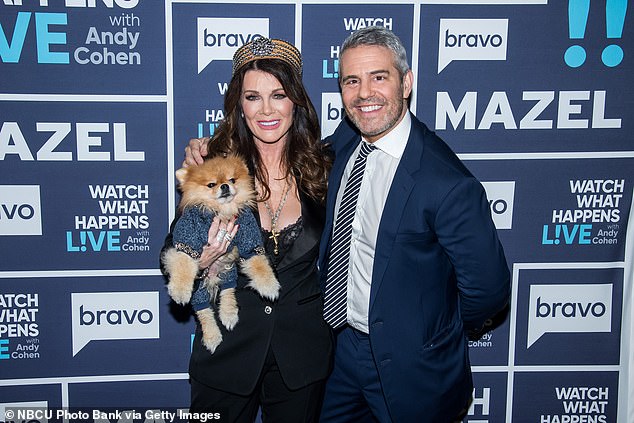 ‘I am so glad that we will continue to see more of Lisa in all of her glory on Vanderpump Rules. I guess that’s what mitigates the loss of her from Beverly Hills,’ Andy said (pictured in April)

‘I am so glad that we will continue to see more of Lisa in all of her glory on Vanderpump Rules. I guess that’s what mitigates the loss of her from Beverly Hills,’ Andy said.

Adding: ‘She will always be the queen of diamonds in the Bravo universe.’

As for the possibility of her return, Andy admitted that the ‘door was always open’ to Lisa in the future. 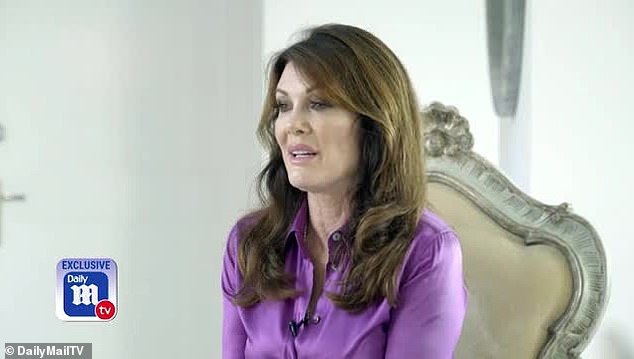 Tough times: Lisa revealed to DailyMailTV last week that after a season of her co-stars ganging up on her she had no interest in returning to the show

Neighbours stars count down to Mardi Gras float
Lilly Becker, 42, flaunts her figure in blue striped bikini as she soaks up the sun in Miami
Taron Egerton cuts a dapper figure at Australian Rocketman premiere in Sydney
George and Joanna Burgess head out for Sunday brunch with their new baby daughter and other kids
Ant McPartlin looks stony-faced as he leaves BGT auditions with cheerful co-host Declan Donnelly
Jenni Falconer, 44, dances in kitchen with daughter Ella Rose, 9
Jesy Nelson shares busty picture a day after it emerged she broke up with Chris Hughes
Amanda Holden looks effortlessly chic in a plunging blue floral midi dress