Golden State Warriors star Kevin Durant made his long-awaited return from a calf injury for Game 5 of the NBA Finals on Monday night, only to suffer another injury in the second quarter before limping off the floor with the help of teammates and trainers.

Durant’s return was seen as the lone bright spot for the two-time defending NBA Champions, who needed a win on Monday to keep their season alive.

Conversely, the Raptors can win the franchise’s first NBA title with a win in Toronto on Monday night.

The 2014 NBA MVP began Monday’s game by nailing his first two field goal attempts – both three-pointers. He checked out of the game after six minutes and had his calf immediately wrapped by trainers on the bench.

The Warriors continued the hot shooting without Durant, who returned in the second quarter, by hitting their first five three-point attempts of the game.

The Warriors’ forward, who missed the last nine games with a strained calf muscle, got hurt again with about two minutes gone in the second quarter. He was dribbling on the right wing and came up lame, falling to the floor and needing help to get back to the Warriors’ bench area.

He didn’t stop there, and limped to the Warriors’ locker room – yelling an expletive before leaving, in obvious frustration.

Raptors fans gave Durant a standing ovation as he limped off the floor. 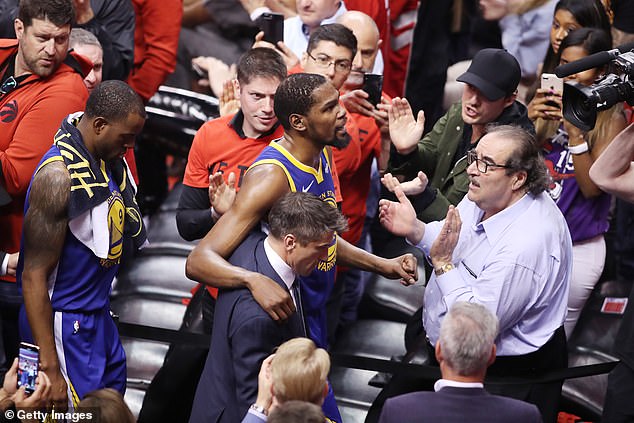 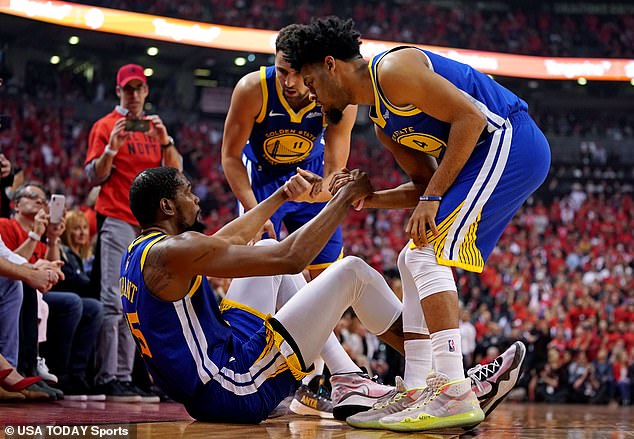 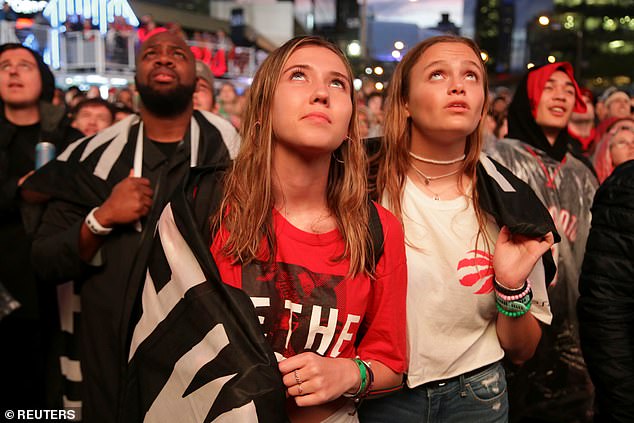 Durant first suffered his calf injury on May 8 in Game 5 of the Western Conference semifinals against the Houston Rockets. He has missed the past nine games but was cleared to return to practice Sunday.

Heading into Game 5, Warriors head coach Steve Kerr said there is no minutes restriction on Durant. According to multiple reports, Durant felt he was a ‘full go.’

‘You worry about the conditioning,’ Kerr said ahead of Game 5. ‘The skill, obviously, is undeniable. He’s a guy who can get a shot off anytime he wants. … He’s Kevin Durant. If we have him out there, he’ll be a threat. We know that.’

‘Yeah, well, he brings everything, right?’ Nurse asked rhetorically before Game 5. ‘He first of all, brings an explosive transition game. He’ll race up the floor and pull up from across half court, like a couple of their other guys do. So it’s another threat in transition you got to get ready for. They have got a package of stuff they run for him.’ 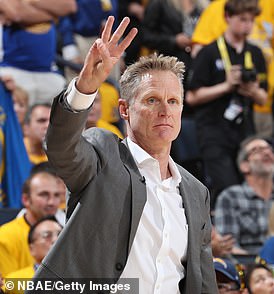 Since becoming head coach in Golden State before the 2014-15 season, former NBA point guard Steve Kerr has led the Warriors to three NBA Titles, including both of the last two championships

2014-15: In his first season in Golden State, Steve Kerr inherits a 51-31 roster from former coach Mark Jackson, guides the Warriors to a remarkable 67-15 campaign and caps the season with a 3-2 NBA Finals win over LeBron James and the Cleveland Cavaliers.

2015-16: Kerr misses over two months of the season because of back issues. Still, he returned to win NBA Coach of the Year as the Warriors won an NBA record 73 wins – breaking the mark set by Kerr’s Chicago Bulls in 1995-96 – and reaching the Finals. Unfortunately, James and the Warriors got their revenge by overcoming a 3-1 series deficit to win in seven games.

2016-17: With the addition of former NBA MVP Kevin Durant, the Warriors cruise to a 4-1 NBA Finals win over James’s Cavaliers.

He scored a season-high 51 points against Toronto on November 29.

‘He went through full shootaround and he went back to get treatment,’ Kerr told reporters.

‘The most difficult thing is just not being able to be out there with your teammates at the biggest time of the year,’ Kerr said. ‘From that perspective, I have just felt bad for him. We all have. If you have a chance to play, go play and see what happens.’

The announcement of Durant’s return prompted oddsmakers to adjust the line for Game 5.

Toronto opened as a three-point favorite but was down to a one-point edge at Westgate on Monday afternoon. The consensus line of -1.5 was still a big drop from the opening number.

Durant has ended both of his last two seasons since joining the Warriors by winning NBA Finals MVP.

In fact, his odds of winning Finals MVP this year jumped to 9-1 on Bovada.com immediately after the announcement of his return. Only Toronto’s Kawhi Leonard and Golden State’s Stephen Curry are currently getting better odds.

Durant’s return was also felt on Twitter, where the phrase ‘Warriors in 7’ began trending throughout Monday evening.

Despite the consecutive defeats, former NBA MVP Stephen Curry says the mood in the Warriors’ locker room isn’t too bad at the moment.

‘I think after Game 4 it was a tough vibe in the locker room just because you lose two in a row at home,’ Curry said Sunday. ‘Nobody likes that feeling at all, especially in The Finals, and it’s kind of a little self-reflection of what do we need to do, what do we need to correct for us to stay alive.

‘But I don’t know – I wouldn’t say we’re down at all. It’s mostly just we’re anxious for tomorrow to just get out there and play a great basketball game.

‘I think we’re confident in the fact that we can do that. The best bet for us is just to block out as much noise as possible, have a great practice today where we home in on the details that we need to correct and really come with the right mindset and the energy and effort we need to play with with our backs against the wall.’

Hockey icon and Ontario native Wayne Gretzky is among the celebrities at Game 5 of the NBA Finals in Toronto. Several other big names from the sports world are in the crowd as well – including Canadian tennis star and former NBA All-Star Celebrity Game player Eugenie Bouchard, soccer’s Thierry Henry and Jonathan de Guzmán and hockey’s Claude Giroux and Evander Kane.

There are also plenty of actors as well, including Chris Tucker and the father-and-son duo of Eugene Levy and Dan Levy.

Billionaire Richard Branson has also been seen in the stands.

And, as always, Canadian rapper Drake is in his front row seat. 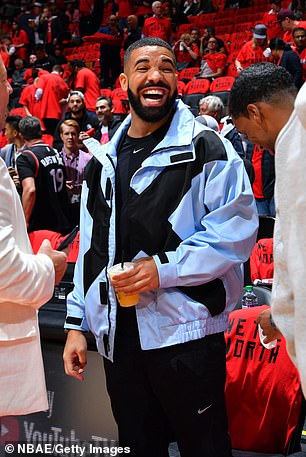 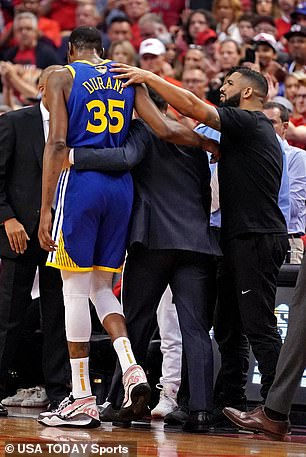 Rapper, Drake, smiles prior to a game between the Golden State Warriors and the Toronto Raptors before Game Five of the NBA Finals. (Right) Drake wishes Durant well as the former NBA MVP is helped off the court after suffering another leg injury

The NBA says some portion of Game 4 of the NBA Finals was watched by almost 11 million Canadians, setting another viewership record in that country.

The average audience in Canada for Toronto’s Game 4 win over Golden State was 4.9 million viewers, nearly 600 percent more than the country’s number for Game 4 of last year’s series between Golden State and Cleveland. Combining the average audience in the U.S. and Canada, the 17.7 million viewers for Game 4 was up 4 percent over Game 4 of the finals last season.

Entering Monday’s fifth game of the series, roughly 16 million Canadians – in a country of about 37 million – have watched at least some part of the finals. 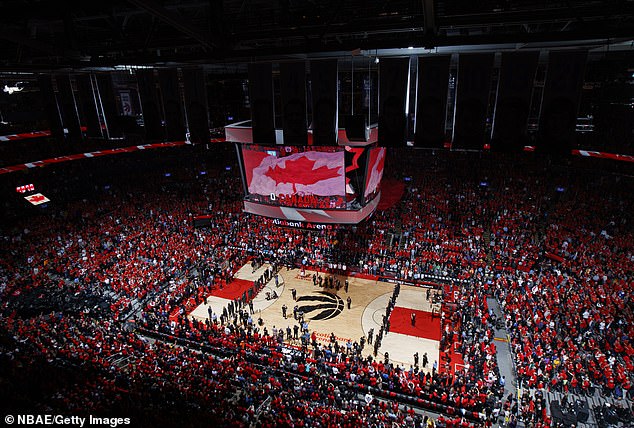 Entering Monday’s fifth game of the series, roughly 16 million Canadians – in a country of about 37 million – have watched at least some part of the finals 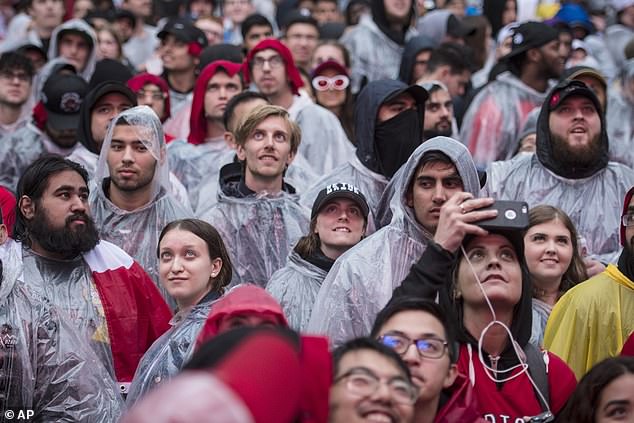 David Griffin began paving a path out of New Orleans for Anthony Davis, but the Pelicans’ personnel boss wants suitors to pave that route with talent in return.

Griffin, the newly appointed vice president of basketball operations, began providing an outline of demands to teams interested in acquiring Davis, the All-Star center who demanded a trade before the 2019 All-Star break, per ESPN.

Adrian Wojnarowski of ESPN reported Griffin isn’t optimistic one team can satisfy his list of needs and it might take two or even three trade partners to facilitate a deal. 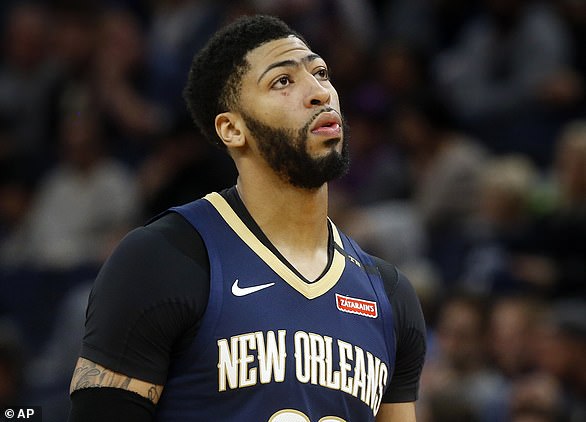 ‘So far, Los Angeles and New York teams — the Clippers and Lakers, Knicks and Nets — have been among front offices inquiring with New Orleans, league sources said,’ Wojnarowski reported. ‘The Boston Celtics have long considered a run at Davis, but they must take into consideration the future of free agent Kyrie Irving before committing to a significant offer of assets to New Orleans.’

Griffin helped assemble a championship roster for the Cleveland Cavaliers upon LeBron James’ return from Miami.

The rebuild in New Orleans won’t likely have an established star as part of the Pelicans’ nucleus, but it likely will include prospective No. 1 overall pick Zion Williamson. 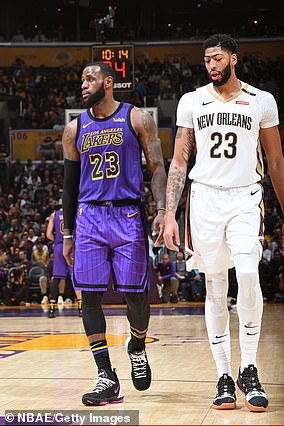 Davis would be eligible for a five-year supermax contract if he stays in New Orleans, with a value above $235 million. A sign-and-trade could be considered, but Griffin is said to be pushing for a deal to completed before the 2019 draft on June 20. That timing and the start of free agency 10 days later could call for creative accounting and asset-for-asset type deals, which would also beckon the involvement of multiple teams.

The Lakers engaged the Pelicans in trade talks in February but those fell apart before much traction had been gained. However, the principal negotiators for the two sides — Magic Johnson for the Lakers and Dell Demps in New Orleans — are no longer employed by the teams involved.

The Pelicans’ previous regime did not place a high value on the young talent the Lakers were attempting to send to New Orleans, including guards Kyle Kuzma and Josh Hart.

The Knicks are expected to make a major push for All-Star talent this summer. What’s not certain is whether they prefer to serve up a pairing from the ‘Special K’ group of Kyrie Irving, Kawhi Leonard, Kevin Durant and Kemba Walker without parting with the assets it would take to acquire Davis.

Uber drivers come clear on essentially the most outrageous acts which have gone on behind their cabs...
Somali student and model says her family were 'discriminated against' at Dunkin' Donuts
A college degree may NOT protect against dementia as previously thought, study finds
Starbucks announces the launch of its Pumpkin Spice COLD BREW
NYPD cop accused of shoplifting from Macy's appears in court clutching a $1,000 Louis Vuitton bag
Retired US Air Force general says China is building a navy in space
Prince George mixes it with the Queen
Simple and delicious ways to use up your festive leftover ham and turkey