Former Nixon White House counsel John Dean is set to deliver testimony where he reflects on ‘remarkable parallels’ between the Watergate cover-up and the findings of Special Counsel Robert Mueller’s Russia probe.

Dean, a star witness of the Watergate hearings in 1973, is a key witness before the House Judiciary Committee, which begins its Mueller hearings Monday.

In prepared testimony, Dean, who helped bring down Nixon with his testimony generations ago, compared the Mueller report to the ‘Watergate Road Map’ outlining crimes by Nixon and associates.

The committee released his searing indictment of Trump’s conduct hours after teh president got a jump on the House Judiciary’s Mueller hearings Monday, labeling star witness John Dean of Watergate fame a ‘sleazebag attorney.’

Dean’s testimony is a side-by-side comparison between the two incidents.

Both, he said, had ‘underlying events’ – Russia’s election interference, and the Watergate break-in.

In both, the white house counsel was ‘implicated in coverup activity.’ Dean then examines the Comey firing, which he likens to Nixon firing Special Prosecutor Archibald Cox – an event McGahn referenced in comments to investigators.

Dean also cites the time Nixon asked his chief of staff to have the CIA ask the FBI not to go any further in its investigation.

He also Mueller report testimony that Trump directed McGahn write a memo disputed that Trump had ever asked McGahn to fire Mueller. ‘This is much like Richard Nixon’s attempt to get me to write a phony report exonerating the White House from any involvement in Watergate,’ he planned to say.

He compared the 2016 Trump Tower meeting with Russians and the initial Trump-drafted statement about it to a false Watergate press statement saying the Watergate burglars ‘were not operating either on our behalf or with our consent.’

The insult came as Judiciary Chairman Jerold Nadler was set to convene the first in a series of hearings on the Mueller report and its findings – though without a scheduled appearance by Special Counsel Robert Mueller.

With Dean, whose Watergate testimony riveted the nation and helped bring down President Nixon, and former U.S. attorneys set to testify, the hearings are seen as a possible prelude to – or substitute for – impeachment proceedings.

Trump called out the hearing as he blasted Democrats on Twitter.

‘For two years all the Democrats talked about was the Mueller Report, because they knew that it was loaded up with 13 Angry Democrat Trump Haters, later increased to 18,’ Trump wrote on Twitter Sunday night. 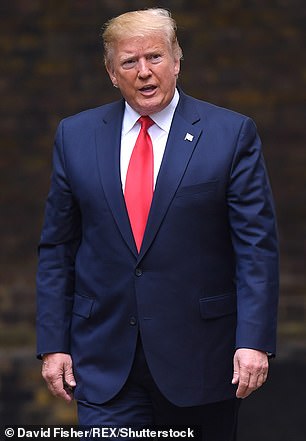 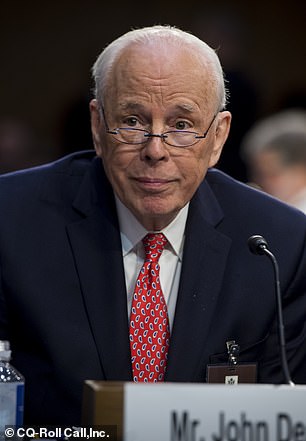 Trump called John Dean (right) a ‘sleazebag’ on Sunday. Dean, who was White House counsel for President Richard Nixon, is scheduled to testify in the House on Sunday

‘But despite the bias, when the Report came out, the findings were No Collusion and facts that led to No Obstruction,’ he continued. 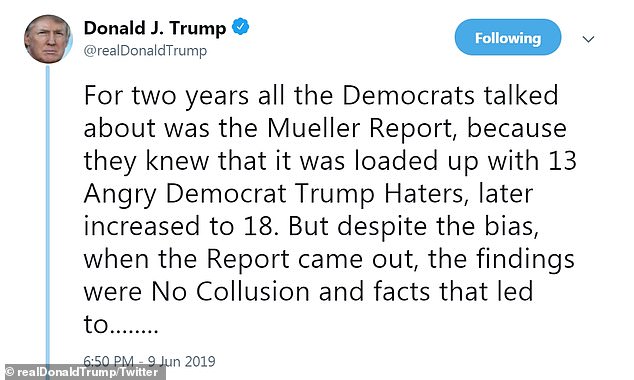 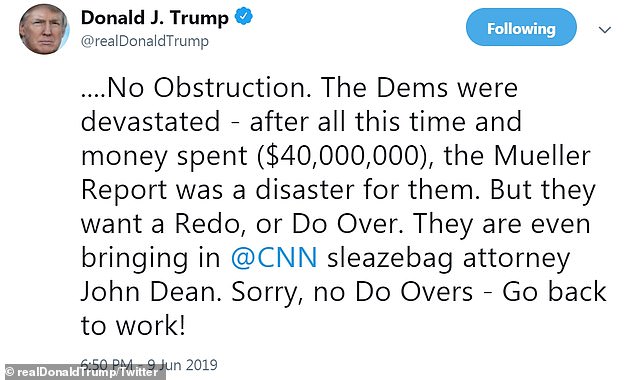 The president continues: ‘But they want a Redo, or Do Over. They are even bringing in @CNN sleazebag attorney John Dean. Sorry, no Do Overs – Go back to work!’

Dean, who was White House counsel for President Richard Nixon, is scheduled to testify on Monday before the House Judiciary Committee at a hearing on ‘presidential obstruction and other crimes.’

With Mueller planning to head to the sidelines, Democrats will rely on Dean, now a CNN contributor critical of Trump, to try to make headlines.

Dean delivered riveting 1973 testimony that helped reveal the existence of White House tapes. He testified that he knew key details of the Watergate cover-up that would eventually force Nixon’s resignation.

In the hearings this week, Democrats will intensify their focus on the Russia probe and pick up the pace on an investigative ‘path’ – in the words of Speaker Nancy Pelosi – that some of them hope leads to impeachment of the president.

In doing so, they are trying to draw the public’s attention on the allegations that Trump sought to obstruct a federal investigation and they want to highlight his campaign’s contacts with Russia in the 2016 election.

And they will lay the groundwork for an appearance from Mueller himself, despite his stated desire to avoid the spotlight. 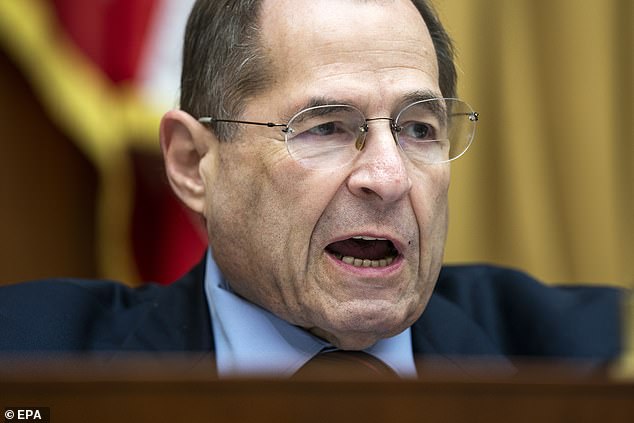 Rep Jerrold Nadler, known to be an aggressive proponent of impeachment, will preside over Monday’s Judiciary Committee hearing on ‘presidential obstruction and other crimes’ 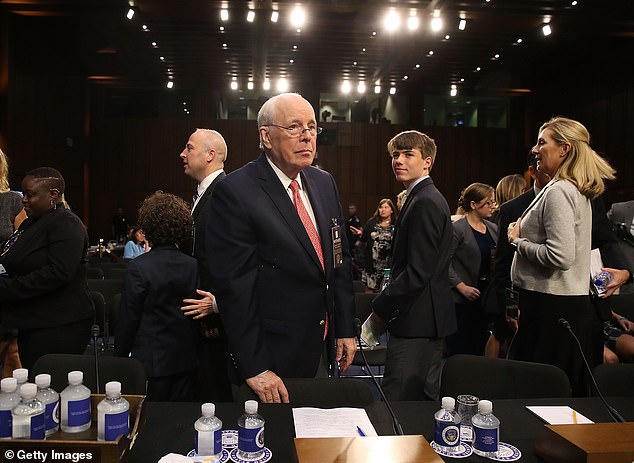 John Dean, former White House counsel to President Nixon, attends a hearing on the nomination of federal appeals court judge Brett Kavanaugh to be an associate justice on the U.S. Supreme Court, in the Hart Senate Office Building on September 7, 2018 in Washington, DC

The hearings will focus on the two main topics of Mueller’s report, obstruction of justice and Russian election interference.

The House Intelligence Committee on Wednesday intends to review the counterintelligence implications of the Russian meddling.

Mueller said there was not enough evidence to establish a conspiracy between the Trump campaign and Russia, but he said he could not exonerate Trump on obstruction.

On Tuesday, the House has scheduled a vote to authorize contempt cases against Attorney General William Barr and former White House counsel Donald McGahn for failing to comply with subpoenas from the Democratic-controlled House.

Barr defied a subpoena to provide an unredacted version of Mueller’s report, along with underlying evidence. McGahn, who is frequently referenced in the report, has defied subpoenas to provide documents and testify before the House Judiciary Committee.

He testified that he knew key details of the Watergate cover-up that would eventually force Nixon’s resignation.

Dean delivered testimony during the Watergate hearings that summer that electrified the nation. His revelations were watched by millions and carried by TV networks. 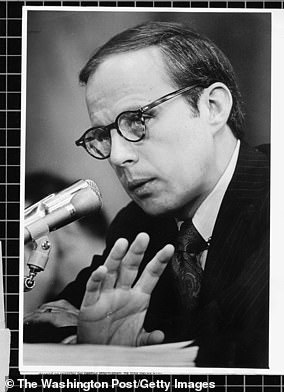 Special Counsel Robert Mueller has indicated he does not want to testify publicly before the current House Judiciary Committee hearings, and said during a press statement last month that he won’t say anything beyond his report on the Russia probe. The White House is fighting a subpoena of Trump’s general counsel Don McGahn – who according to the Mueller report invoked Nixon’s ‘Saturday Night Massacre’ as the reason he did not want to carry out a directive to help force out Attorney General Jeff Sessions.

Dean, 80, is now a CNN commentator, and Trump attacked him on Twitter as a ‘sleazebag attorney.’

In the Watergate affair, he is one of the few perpetrators to emerge with his reputation intact, after deciding to blow the whistle on conduct he took part in. Dean had warned Nixon in 1973 that there was a ‘a cancer growing on the presidency.’

Dean participated in the cover-up of the 1972 Watergate break-in of the Democratic National Committee. Among other things, he helped oversee pay-offs to the burglars.

He revealed his White House conversations with President Nixon about the cover-up.

Dean, wearing a tan suit and glasses, testified about his March, 1973 conversation with Nixon in the Oval Office: ‘I began by telling the president that there was a cancer growing in the presidency. And if the cancer was not removed the president himself would e killed by it. I also told him that it was important that this cancer be removed immediately, because it was growing more deadly every day,’ he said.

He also said he was involved in obstruction of justice.

Dean also testified about his suspicion about the existence of a White House taping system – information that would eventually lead to revelations about Nixon’s own participation in the cover-up, and sparking his resignation.

‘I don’t know if a tape exists,’ Dean told lawmakers. ‘But if it does exist … I think this Committee should have that tape because it would corroborate many of the things this Committee has asked me.’

After Dean’s testimony about the tapes, former White House aide John Butterfield confirmed the existence of a taping system.

Dean was sentenced to four years in prison, but wound up only serving four months. 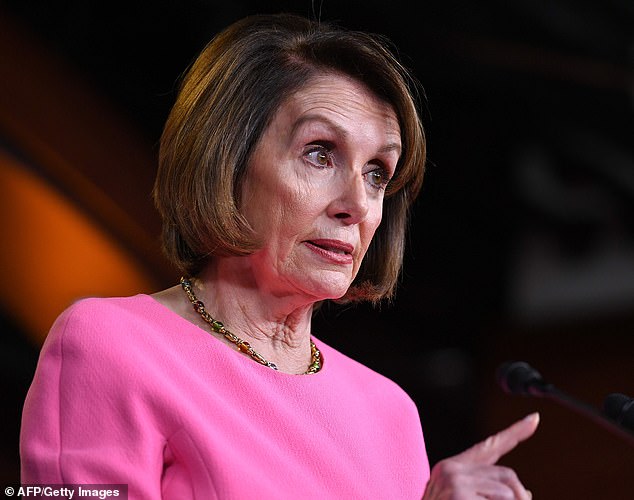 Pelosi has so far rejected immediate impeachment, preferring a slower, more methodical approach to investigating the president, including the court fights and hearings

Language in the resolution would make it easier for committee chairmen to take the Trump administration to court. Those chairmen could take legal action to enforce subpoenas in the future without a vote of the full House, so long as the chairmen have approval from a five-person, bipartisan group where Democrats have the majority.

With Trump pledging that ‘we’re fighting all the subpoenas,’ Democratic leaders want to avoid repeated floor votes on contempt resolutions that detract from their legislative agenda.

The procession of hearings and votes in the week ahead is partly designed to mollify anxious Democrats who have pushed Pelosi, D-Calif., to begin impeachment proceedings immediately.

Pelosi has so far rejected that option, preferring a slower, more methodical approach to investigating the president, including the court fights and hearings.

During a meeting with the House Judiciary Committee chairman, New York Rep. Jerrold Nadler, and other committee heads last week, Pelosi made the case that she would rather see Trump voted out of office and ‘in prison’ than merely impeached, according to a report in Politico.