The moment an angry crowd attacked the man accused of shooting former Red Sox star David ‘Big Papi’ Ortiz in a Dominican Republic bar on Sunday was caught on camera in a video showing the alleged gunman, covered in blood, fielding punches and kicks.

Ortiz, 43, is recovering in the hospital after having surgery to remove his gallbladder and part of his intestines.  He is expected to make a full recovery but suffered liver damage during the six-hour operation, his spokesman said.

The former slugger for the Red Sox was shot in the back at near point-blank range while having drinks with friends including local TV host Jhoel Lopez.

Police are yet to offer a motive for the shooting but they have arrested Eddy Feliz Garcia.

Garcia was chased down at the bar by a crowd of Ortiz’s supporters and was beaten relentlessly until police arrived. 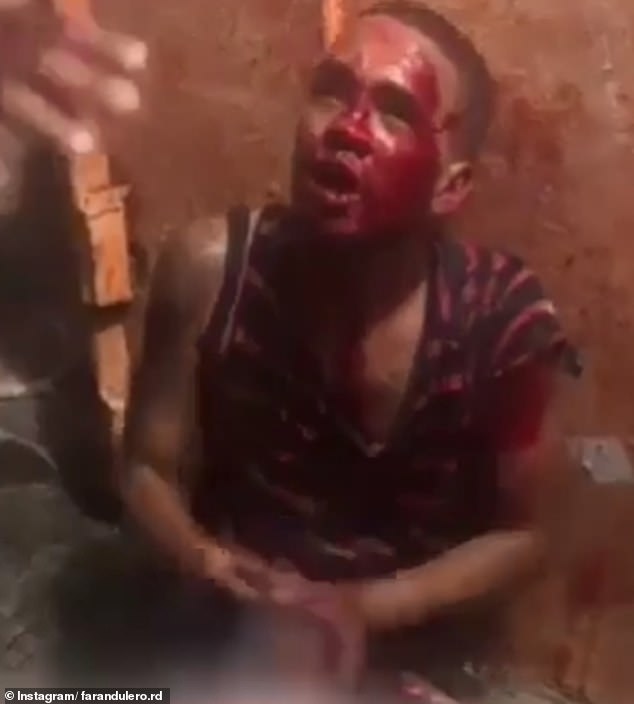 Eddy Feliz Garcia is shown being attacked by a crowd of Ortiz’s friends and supporters after allegedly shooting the Red Sox star on Sunday at a bar in the Dominican Republic. The motive for the shooting remains unknown 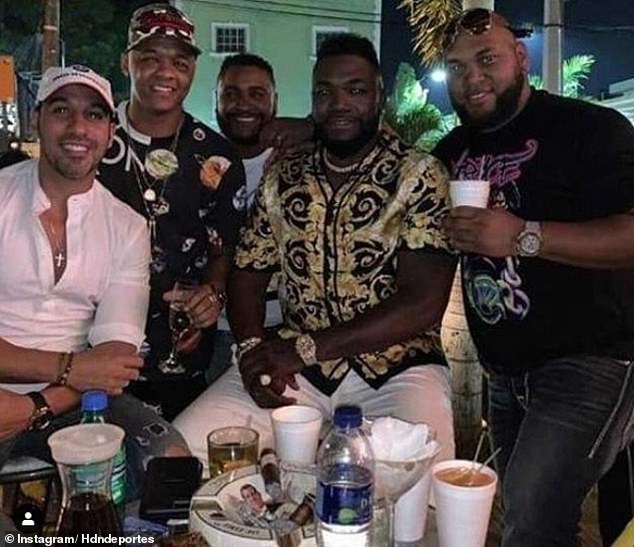 David Ortiz is shown in the center of this image with friends including Jhoel Lopez (far left), hours before he was shot. He is in the hospital and is in a stable condition after having his gallbladder and parts of his intestines removed 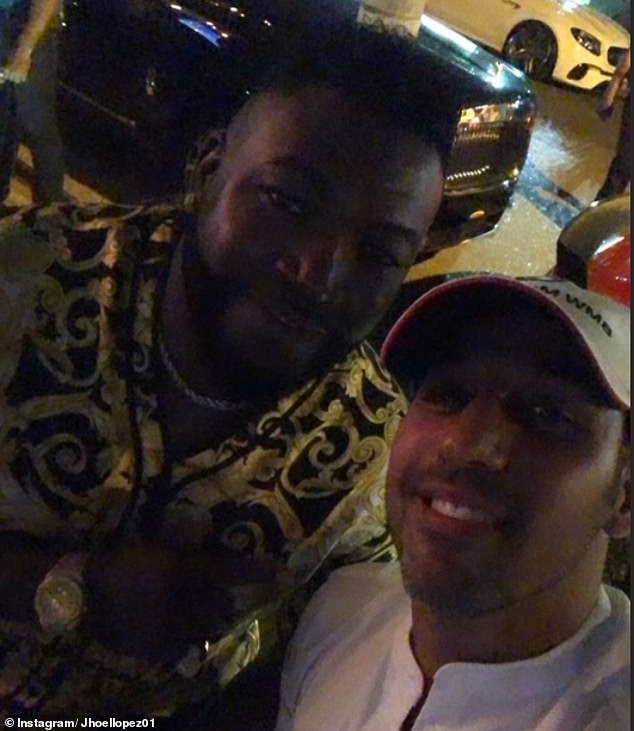 In another image taken hours before they were shot, the pair are shown smiling for the camera

In a video widely shared on social media afterwards, he is filmed claiming not to know anything about the attack.

Ortiz, who retired from baseball in 2016, is from the Dominican Republic and splits his time between the city of Santo Domingo, where the attack happened, and Miami where he lives with his wife and children.

He is well known in Santo Domingo and is known to frequent the bars and restaurants where the attack happened.

Before he was shot, he and Lopez were seen with other men drinking and smoking cigars.

He was sitting at a table with Lopez when the gunman approached him on the back of a motorcycle and shot him in the back.

The crowd seized on Garcia as Ortiz was taken to the hospital.

Initial reports suggested that it was an attempted robbery but police have since dismissed that. 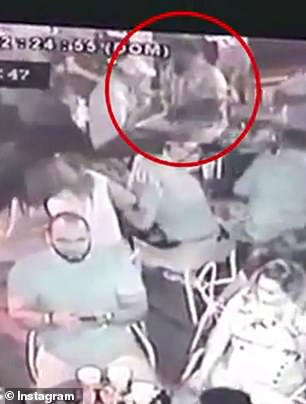 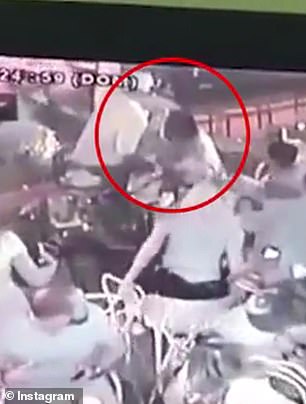 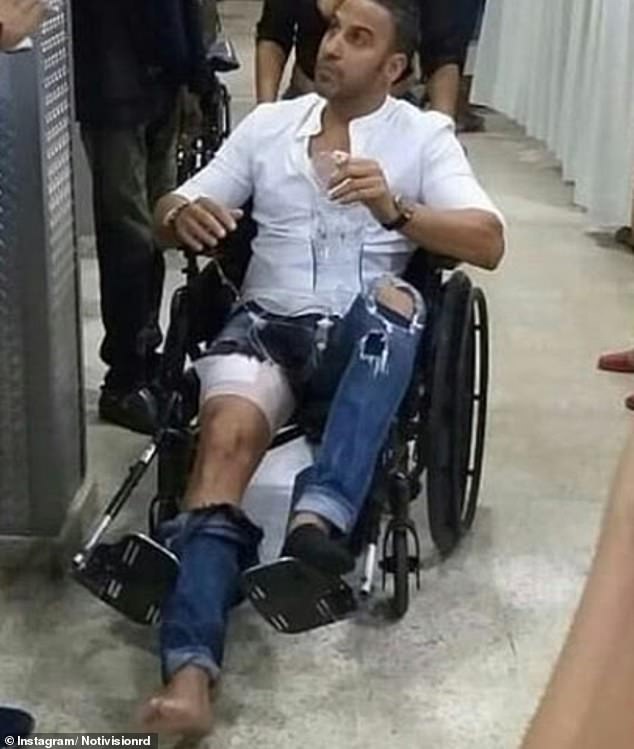 Lopez was shot in the leg, possible by the same bullet which entered Ortiz’s body in his back and went straight through him, exiting out of his stomach

They will not say whether or not they have another motive in mind.

‘So far the case is under investigation. Socia media networks are speculating many things.

David is out of danger, thank God. Big Papi will be around for a long time
Leo Ortiz, the star’s father

‘We can not give you more details,’ Lieutenant Pimentel of the National Police in Santo Domingo told DailyMail.com on Monday.

Ortiz was rushed into surgery at the Abel Gonzolez Clinic. Before he was operated on, he told doctors: ‘Please don’t let me die, I’m a good man.’

His father said on Monday that he was doing well after the operation.

‘Doctors say that David is out of danger, thank God. What they have told me post-op is that the doctors believe he will recover quickly.

‘Big Papi will be around for a long time,’ Leo Ortiz told.

Lopez told Diario Libre via a WhatsApp message: ‘I am well. I am recuperating.’

The Red Sox have offered to send a private plane to return Ortiz to medical facilities in the U.S. if needed. 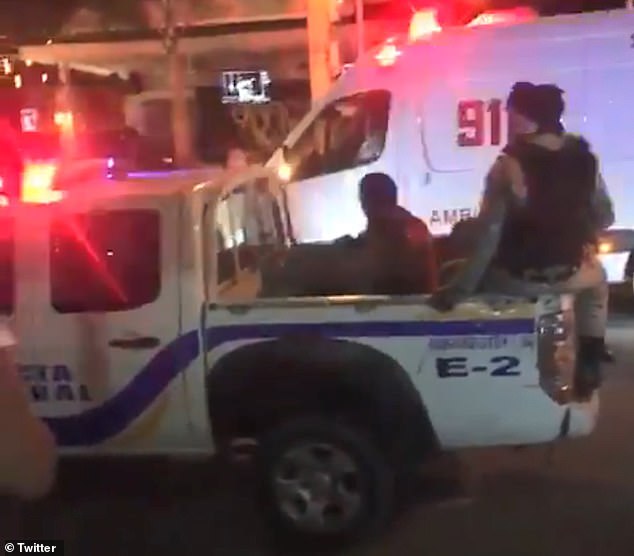 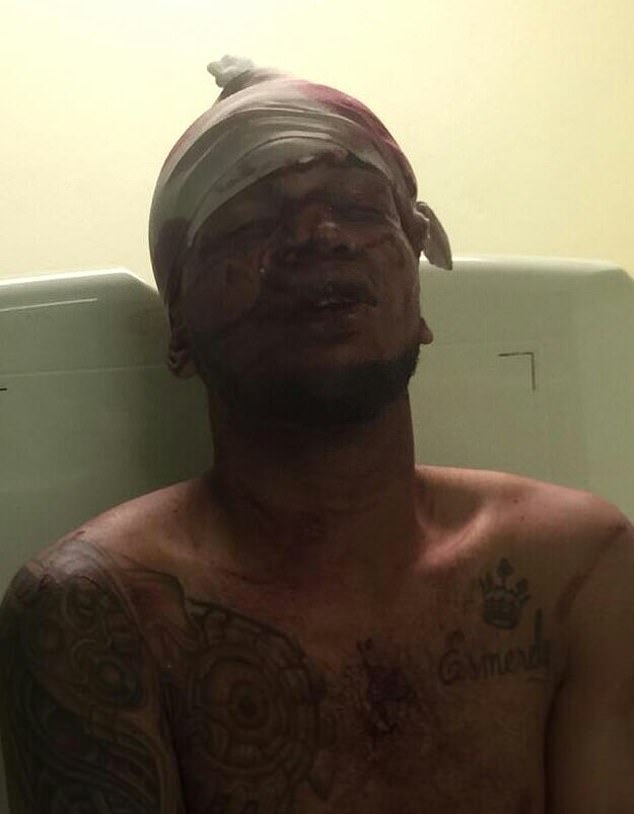 Garcia is shown in police custody after being removed from the scene. He suffered extensive injuries before officers arrived 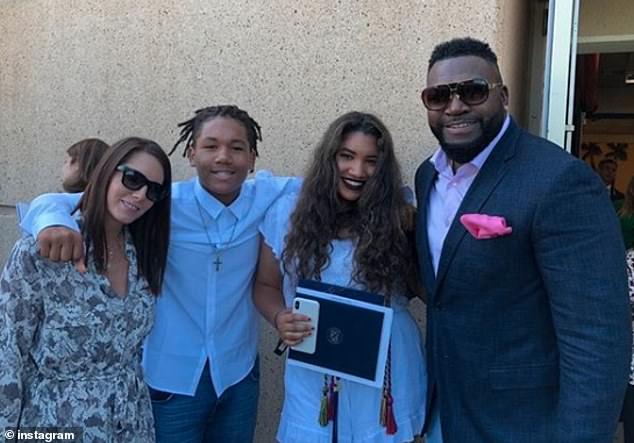 Ortiz is shown with his wife Tiffany and two of his three children. He splits his time between the Dominican Republic and Miami. It is unclear if his family was with him on the island when he was attacked

The shooting sparked an outpouring of support from both former teammates and former opponents.

‘I’m at peace knowing you out of danger; you a strong man Compai, can’t wait to hear your voice.

‘My thoughts and prayers are with you, see you soon,’ tweeted Pedro Martinez, a former Red Sox pitcher from the Dominican Republic who was an inspiration for Ortiz on his path to MLB.

‘Anxiously waiting for more news. In the meantime, only prayers for @davidortiz, Tiffany and their family,’ tweeted Alex Rodriguez, former slugger for the arch-rival New York Yankees. 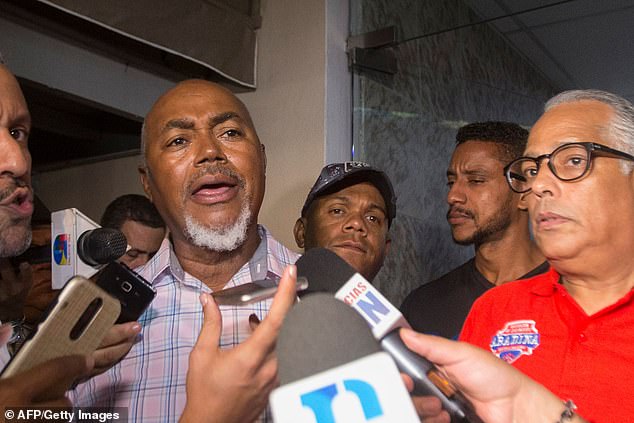 Leo Ortiz, father of former Boston Red Sox slugger David Ortiz, talks to the press outside the clinic where his son is being treated after being shot 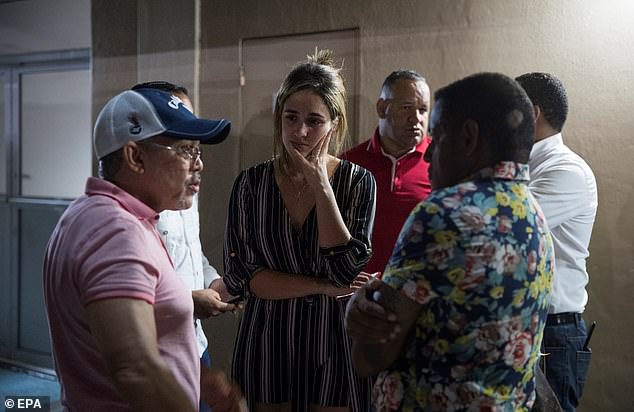 Liza Blanco (center), wife of the television host Jhoel Lopez, who was wounded in the shooting, waits at the Abel Gonzalez clinic in Santo Domingo, Dominican Republic 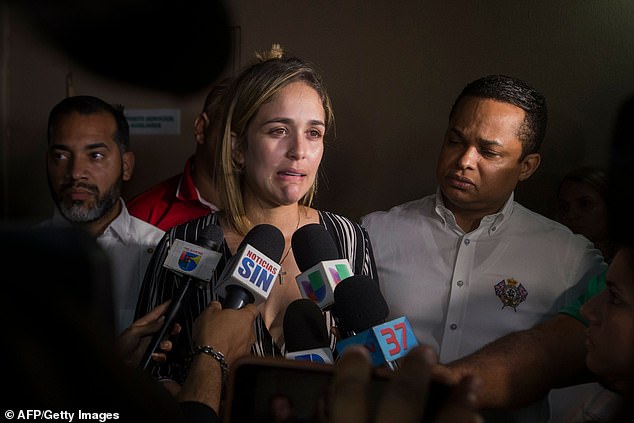 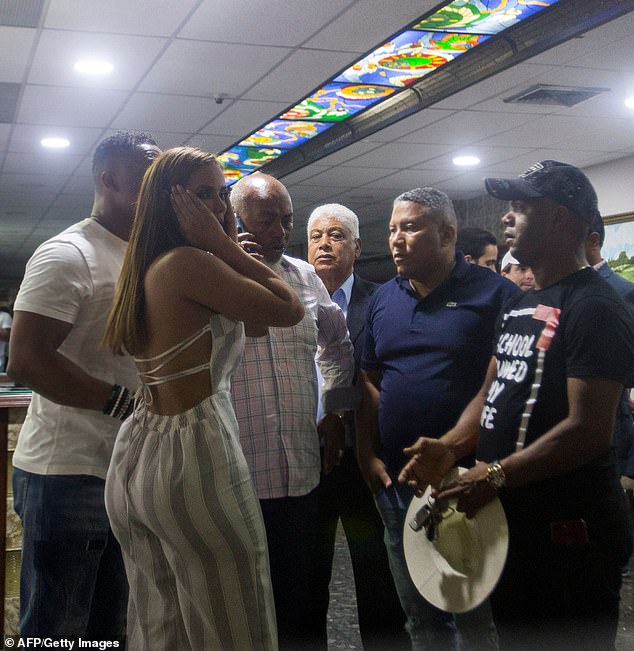 The shooting triggered an outpouring of sympathy from other sports stars

Ortiz is married to Tiffany Ortiz and he has three children.  It is unclear if they were with him in the Dominican Republic at the time. 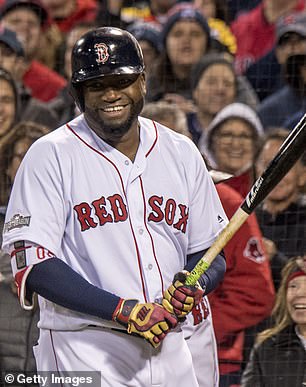 Ortiz is beloved in the Dominican Republic, where he is well-known for his charity work with children.

In 2007, Ortiz founded the David Ortiz Children’s Fund to help children with cardiac disorders in both the Dominican Republic and New England.

Ortiz ended his 20-year big league career in 2016, when he earned the last of his 10 All-Star appearances.

The former designated hitter and first baseman won seven Silver Slugger awards in his career, and he hit 541 home runs with 1,768 RBIs in 2,408 games in the majors.

Ortiz began his major league career by playing six seasons for the Minnesota Twins (1997-2002), but his career blossomed after he joined the Red Sox.

His postseason heroics helped Boston capture its first World Series title in 86 years in 2004, when he was the Most Valuable Player of the American League Championship Series as the Red Sox overcame a 3-0 series deficit to the New York Yankees in seven games.

He also helped the Red Sox win championships in 2007 and 2013, capturing World Series MVP honors in the latter season.

Tom Brady says his goal is to play five more years in the NFL as quarterback gears up for 19th year
Father of gang-rape victim Hannah Cornelius faces her killers in court
Two bodies found in rural Oklahoma grave believed to be 28-year-old mother and her friend, 32
Gisele Bündchen rocks jeans with a sweater as she goes makeup-free after Tom Brady's Super Bowl win
Man discovers his dad 'shot his mother and brother then killed himself' after seeing Facebook posts
Trump says 'I know NOTHING about Wikileaks' after Julian Assange's arrest
Risk-free mouth-swab DNA test reveals if surgery patients are at risk of scarring badly
Adam Schiff: Trump threatened me in tweet saying I have 'not paid the price, yet' for impeachment