Seven South Korean tourists are dead while 21 remain missing after a sightseeing boat capsized and sank on the River Danube in Budapest.

Rescuers were scrambled to the water outside the Hungarian Parliament building after the Mermaid collided with another tourist boat around 9.15pm on Wednesday.

A total of 33 South Koreans were on board, Seoul’s foreign ministry said, confirming the seven dead were Korean.

They confirmed that none of the passengers were wearing life jackets on the fast-moving river which has swollen during torrential downpours throughout May.

An eyewitness told local media a larger vessel had run into the back of the smaller tourist vessel and photos of the moored Viking hotelship showed abrasive damage to its hull.

The wreckage of the Mermaid was found on the riverbed after several hours of searching near the Margaret Bridge, one of the main bridges connecting the two parts of the Hungarian capital, local media said.

Seven passengers were said to be in a stable condition in hospital despite suffering hypothermia from the frigid water which was around 50 degrees Fahrenheit. 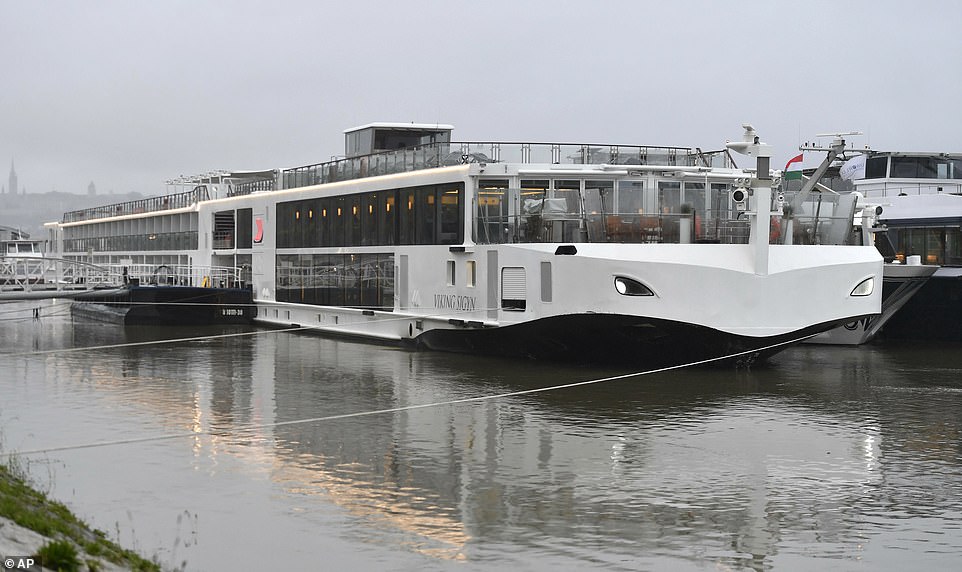 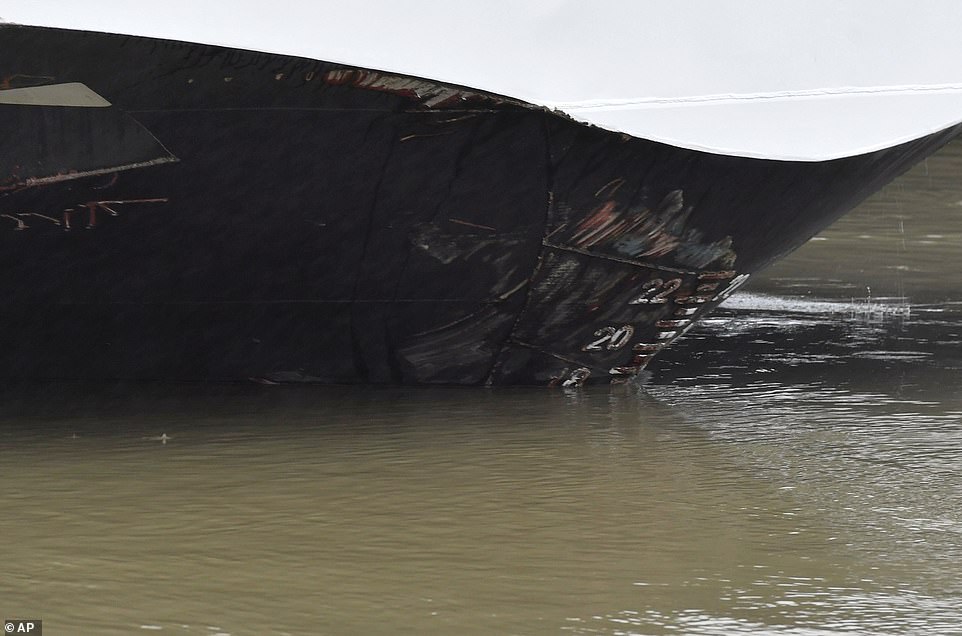 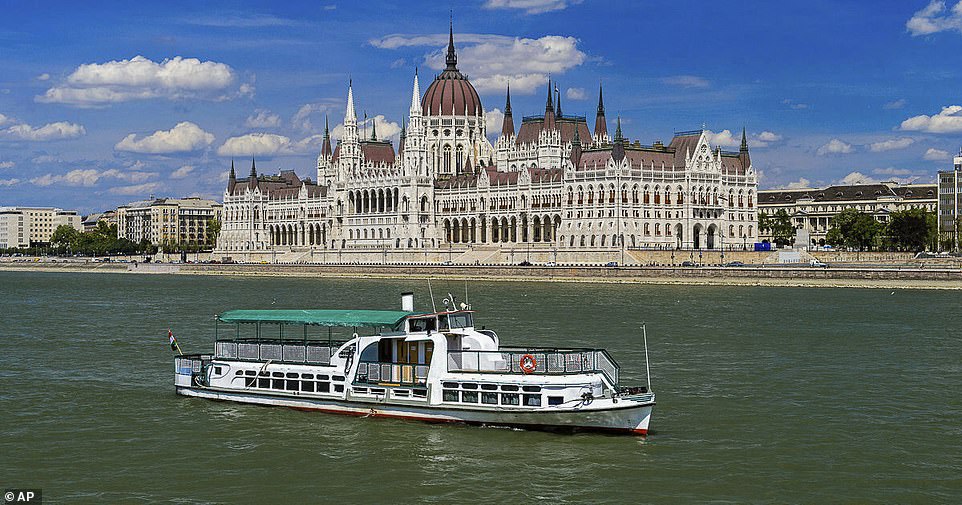 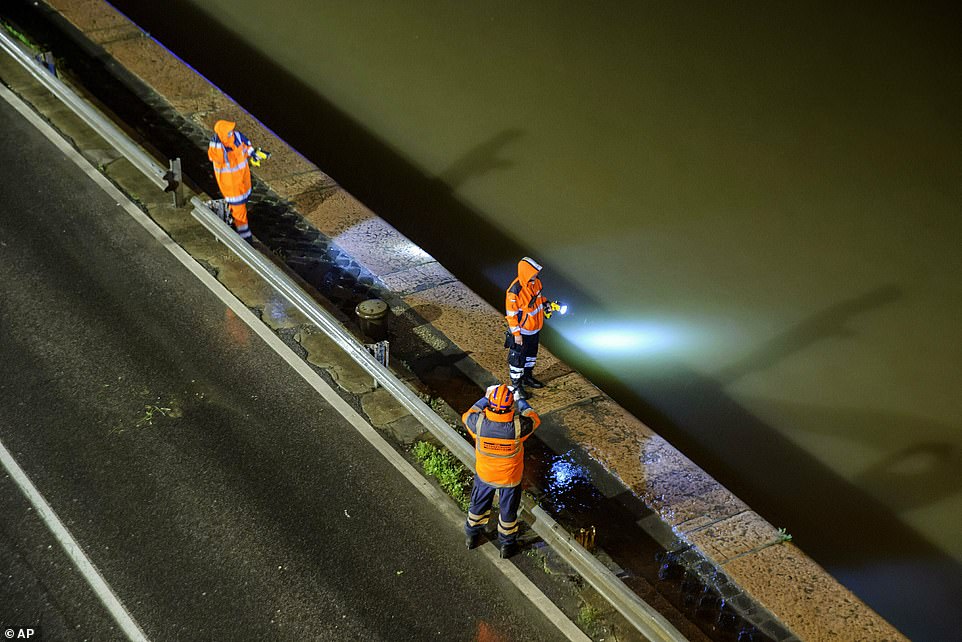 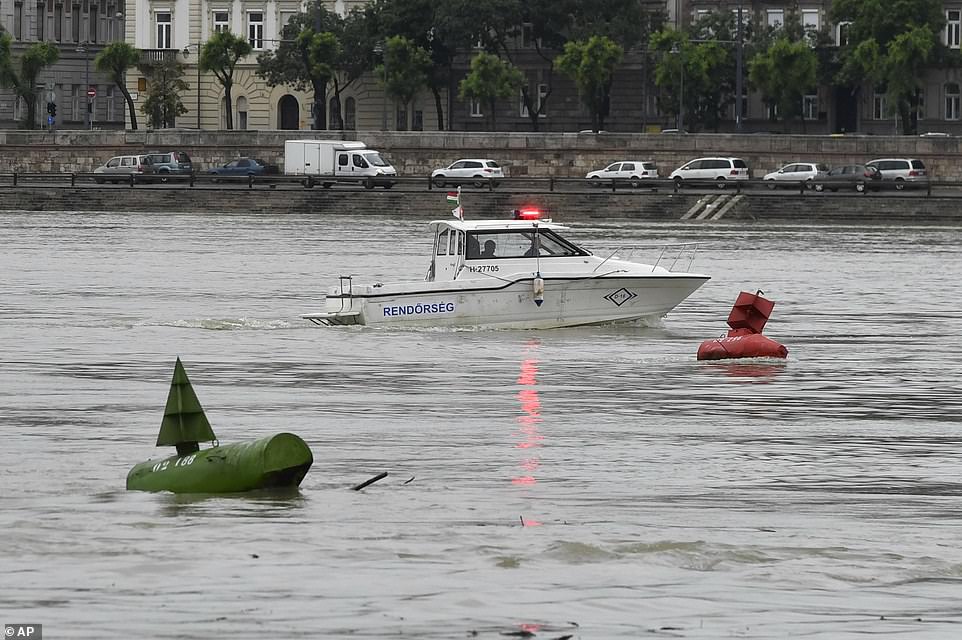 A fire brigade rescue boat takes part in the search operations for survivors on the River Danube in downtown Budapest, Hungary on Thursday morning

The boat started to take on water before it was flipped over and started sinking as heavy storms raged in the Hungarian capital, local media reported.

‘Seven people have been taken to hospital in a stable condition with hypothermia and shock symptoms,’ Gyorfi added.

‘Police are searching the river throughout the entire length of the Danube in Hungary south of where the incident took place,’ he said.

Earlier, the news website Index.hu said one of those rescued was found near the Petofi Bridge, which is about two miles south of Parliament.

Local media reported that one of the bodies was found several miles south of the collision location, although Gal declined to confirm.

The temperature of the river water is between 10 and 15 degrees, according to local media.

The search for the missing with the help of divers and police shining lights continued through the night. 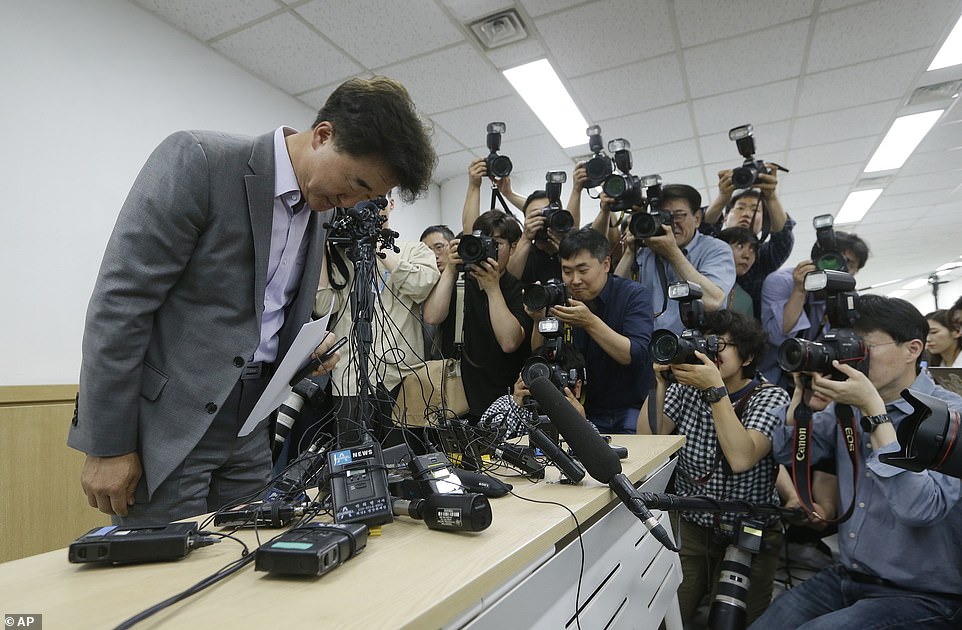 The Very Good Tour agency senior official Lee Sang-moo (left) bows to make an apology during a press conference at its headquarters in Seoul, South Korea 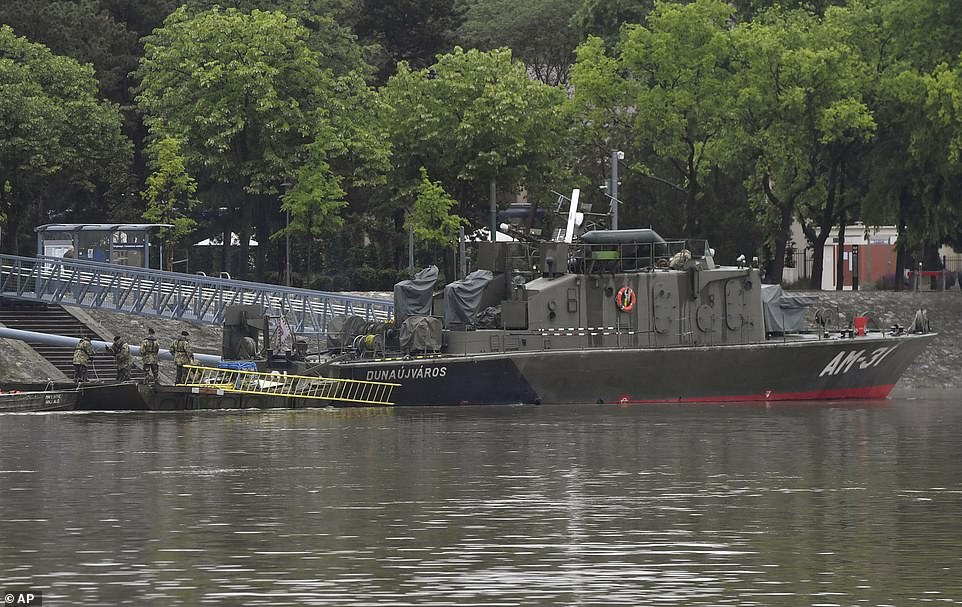 A film crew working from a bridge south of the accident site also used reflector lights to help light up the water through the gloom and pouring rain, reported local media.

Heavy rainfall since the beginning of May has led to high water levels and a fast-moving river current, complicating rescue efforts.

The accident happened on a popular part of the Danube river for pleasure trips, from where passengers can view the city and parliament building illuminated at night.

The boat was regularly serviced and had no apparent technical faults, Mihaly Toth, a spokesman for Panorama Deck that owned the vessel, told the Hungarian news agency MTI.

‘It was a routine sightseeing trip,’ said Toth.

‘We know nothing about how it happened, the authorities are investigating, all we know is that it sank quickly,’ he said.

An eye-witness told the Index.hu news-site that the Mermaid, which could hold 60 people on board, had been hit from behind by a large cruise boat.

Web camera footage from a hotel rooftop posted on local news-sites appeared to show the bigger boat colliding with the Mermaid.

Access to the river has been blocked by the authorities, according to public television.

Dozens of rescue personnel, including from the military and divers, were involved in the search. Employees from the South Korean Embassy in Budapest were assisting Hungarian officials in identifying those rescued and the deceased.

Moon’s spokeswoman, Ko Min-jung, said in Seoul that Moon also ordered the launch of a government task force led by Foreign Minister Kang Kyung-wha and for officials to maintain close communication with the family members of the South Korean passengers. 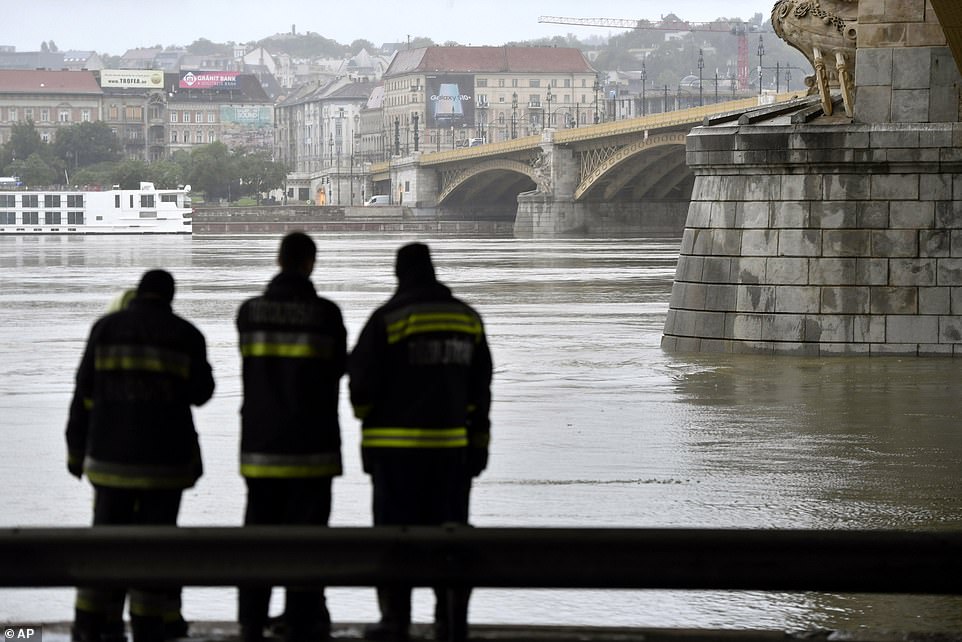 Firemen stand at Margit Bridge, where the wreck of a sightseeing boat was found in downtown Hungary 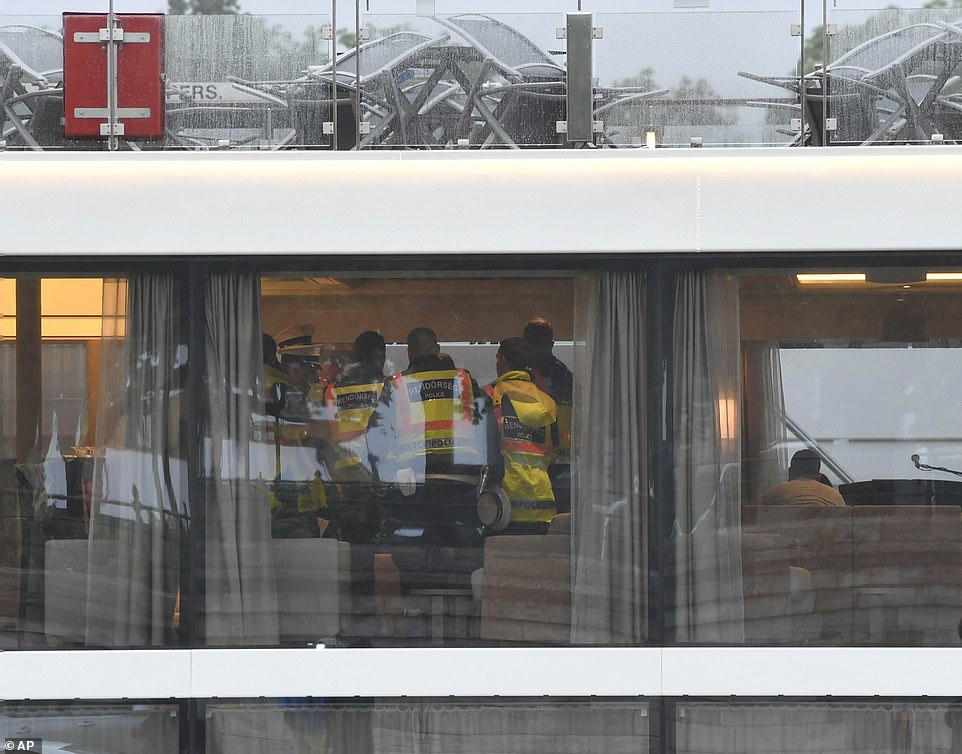 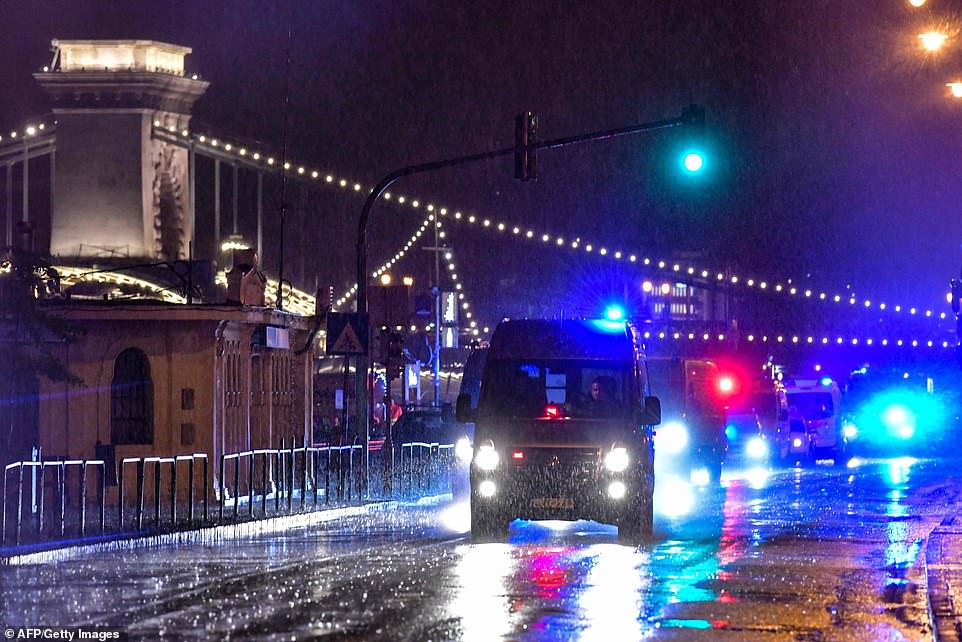 Emergency services raced to the scene of the accident, which happened during heavy rain 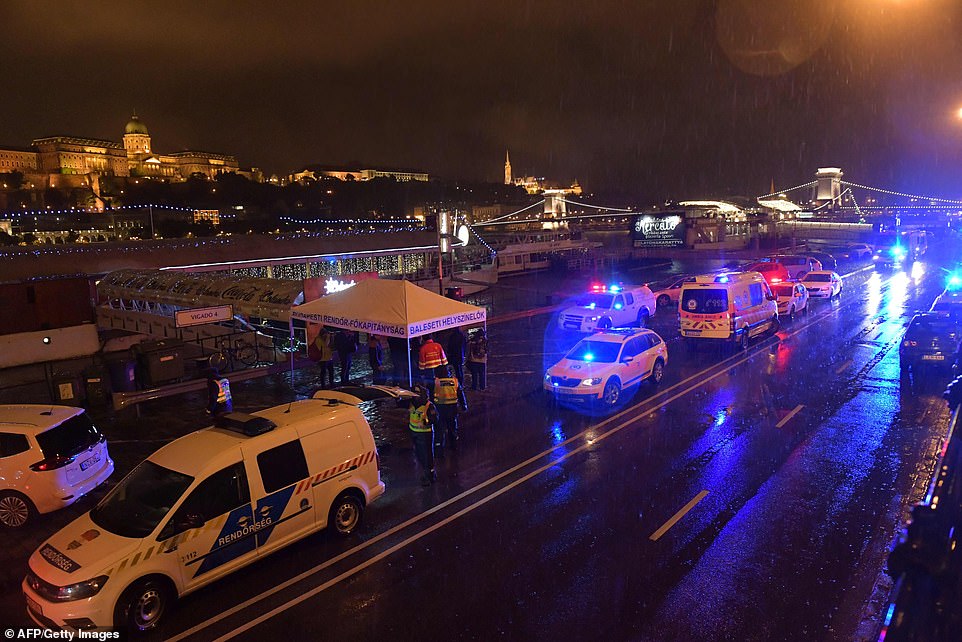 A team of South Korean officials left for Hungary on Thursday to assist with the rescue operations and support passengers and their families. Kang was also to travel to Hungary.

The ministry in a briefing Thursday said that the Seoul government will closely cooperate with Hungarian officials so that the rescue efforts can proceed swiftly and effectively. It said the tourists were not wearing life jackets.

The Very Good Tour agency said the tourists left South Korea on May 25 and were supposed to return June 1.

Most of them were family groups, and they included a six-year-old girl. Her status wasn’t immediately clear but she did not appear on a list of survivors provided by the tour agency.

Senior agency official Lee Sang-moo disclosed the identities of the seven rescued South Koreans – six women and one man, aged between 31 and 66. The company is arranging for family members of the tourists to travel to Hungary as soon as possible.

The boat that sank was identified as the Mermaid, which is described on the sightseeing company’s website as ‘one of the smallest members of the fleet.’ It has two decks and a capacity for 60 people, or 45 for sightseeing cruises.

Mihaly Toth, a spokesman for the Panorama Deck boating company, said the Mermaid was on a ‘routine city sightseeing trip’ when the accident happened.

He told state television that he had no information about any technical problems with the boat, which he said was serviced regularly. Hajoregiszter.hu, a local ship-tracking website, lists the Hableany as having been built in 1949 in what was then the Soviet Union. 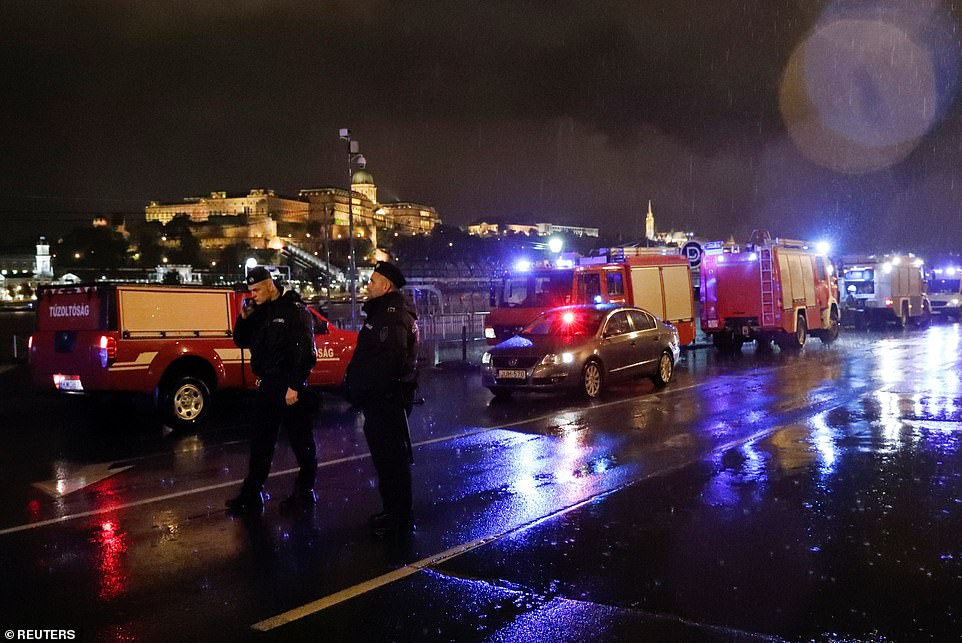 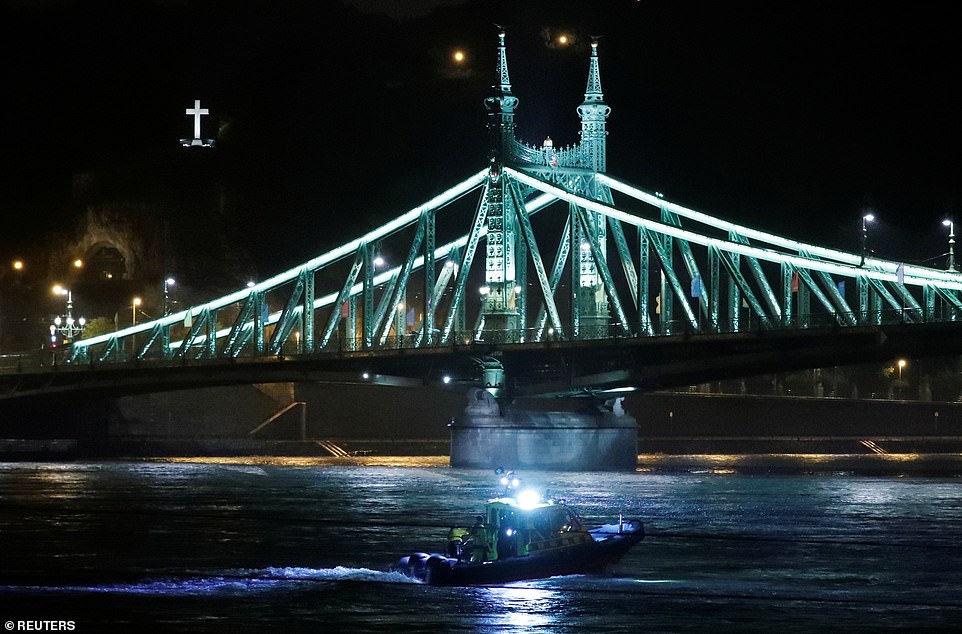 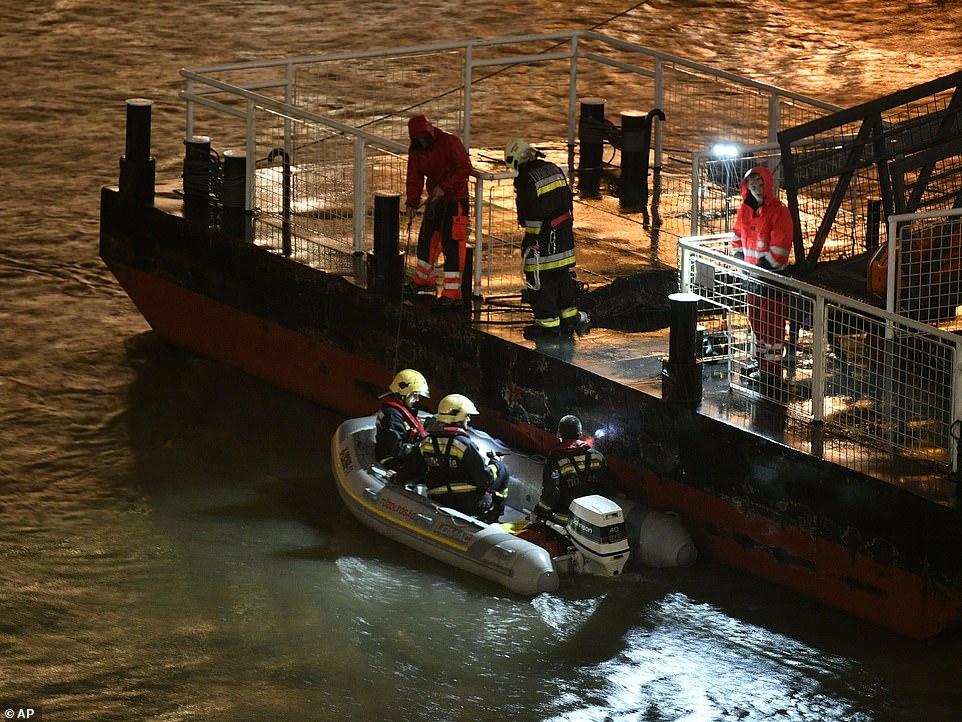 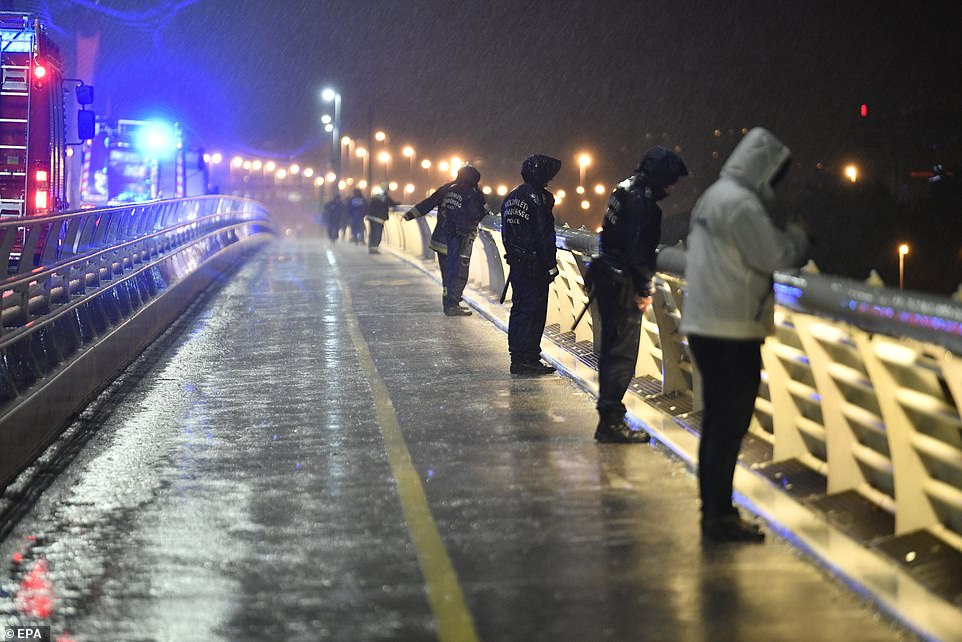 The Margit Bridge connects the two halves of the city, Buda and Pest, with a large recreational island in the middle of the Danube. It is the bridge just north of the famous Chain Bridge, a suspension bridge originally built in the 19th century that, like the Parliament, is a major tourist draw in the heart of the city.

The river flows south, meaning that survivors were likely to be swept through the well-populated, historic part of the city.

Index.hu reported that other riverboats shined spotlights into the water to aid with the search, and that a film crew operating on the Liberty Bridge farther down the river directed its lighting equipment toward the Danube to assist.

In recent years, Budapest has emerged as a popular destination for film, television and other commercial video production.

Budapest has enjoyed a boom in overseas tourism in recent years. Long-haul flights from as far away as Dubai and Beijing increasingly fly visitors from Asia and the Middle East to the Hungarian capital, a relatively affordable but history-rich European destination.

Budapest’s airport said it handled a record number of travelers in 2018, with passenger numbers surging more than 13 percent to 14.9 million.