Labour members and former ministers today dared Jeremy Corbyn to throw them out of the party after Alastair Campbell’s dramatically ejection for voting Liberal Democrat.

Voters who have backed Labour for decades have been using the hashtag #expelmetoo and posted pictures of ballot papers showing they voted for a different party at the European elections last week.

Tony Blair’s home secretary Charles Clarke also voted Lib Dem in a ‘one-off decision’, ex-defence secretary Bob Ainsworth backed the Greens last week while former MP Fiona Mactaggart dared Labour to expel her after she revealed on Twitter she had not voted for the party.

BBC Newsnight claims they will not be thrown out because Alastair Campbell’s case is considered more serious because he revealed his Lib Dem support on live TV.

Undermining his leader he said: ‘There should be an amnesty for members who voted a different way last week. We should be listening to members rather than punishing them’. 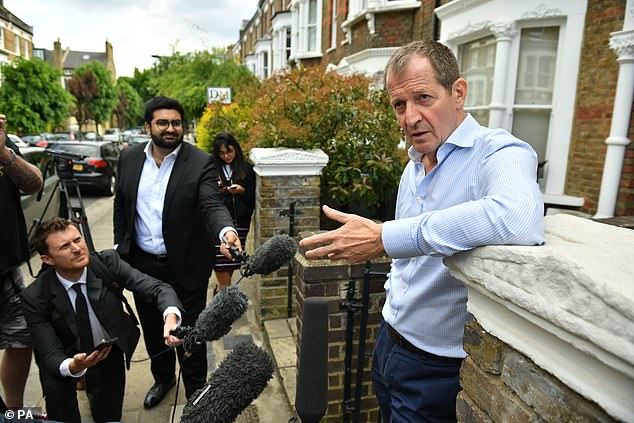 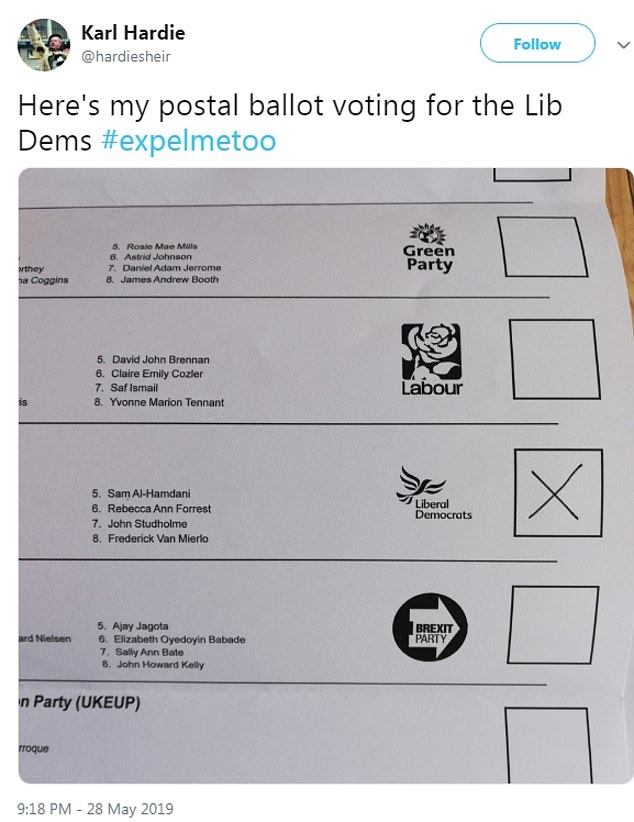 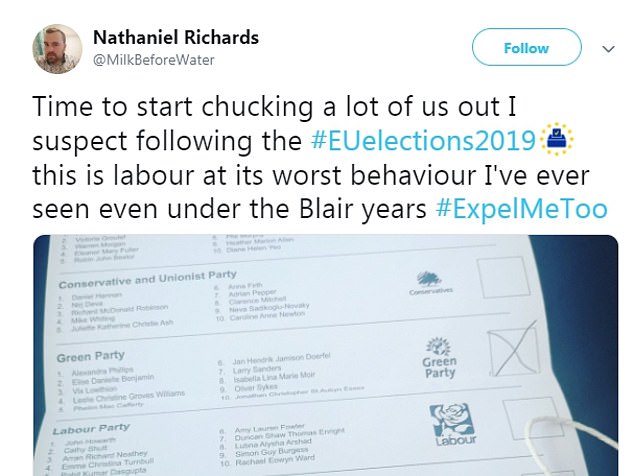 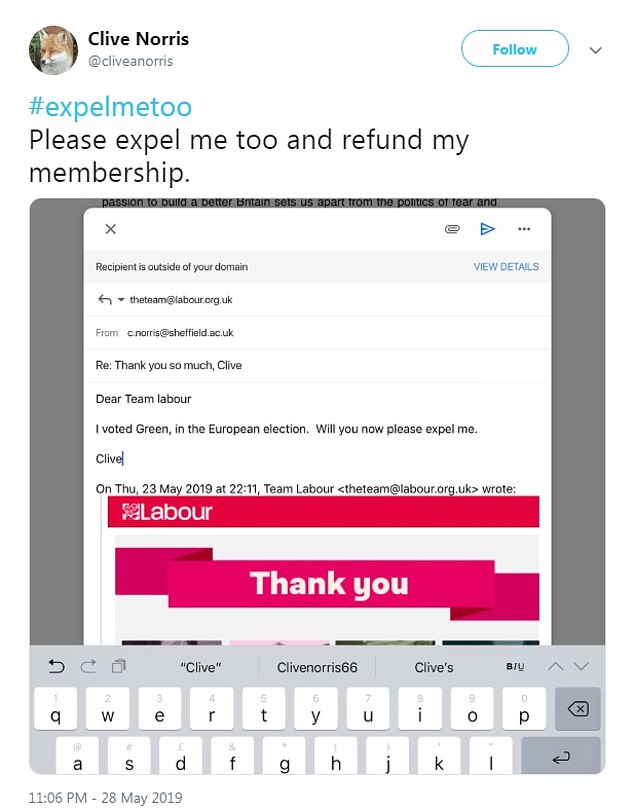 The decision to throw Tony Blair’s former spin doctor out of the part has left Labour and Mr Corbyn facing a mass rebellion.

Thousands have tweeted the phrase #expelmetoo to admit voting for another party –  some have emailed Labour confessing and others have written to the party’s HQ in London.

Many are irate that those accused of anti-Semitism or threatening anti-Corbyn MPs have remained in the party but it took just 36 hours to expel Mr Campbell.

Tony Blair’s former spin doctor was told by email he had been thrown for supporting a rival party.

He had only revealed late on Sunday night that he voted Liberal Democrat ‘to try to persuade Labour to do the right thing’ on a second referendum. Labour insisted yesterday that supporting another party was ‘incompatible with membership’ – despite Mr Campbell making clear that he’ll ‘always be Labour’.

Last night critics pointed to the speed with which Labour had expelled Mr Campbell compared to the length of time it has taken to act against members accused of anti-Semitism and other serious allegations.

The expulsion came on the day the Equality and Human Rights Commission launched a formal inquiry into the party over anti-Semitism. Labour MP Jess Phillips said Mr Campbell was ‘expelled quicker than a man who threatened to kill me and quicker than a man in my local party who denied the Holocaust’, adding: ‘Both are only still suspended.’

Dame Margaret Hodge said: ‘So it takes five days [from voting] for Labour to expel Alastair Campbell but almost three years to expel prolific anti-Semite Jackie Walker. This is why the EHRC are investigating.’

Miriam Mirwitch, national leader of Young Labour, suggested the Campbell story was being used to distract attention away from the EHRC anti-Semitism probe that was announced into the party yesterday.

She said: ‘The Alastair Campbell story is a dead cat distracting from the EHRC investigation. It matters that our approach to discipline is so inconsistent.’ Mr Campbell said there appeared to be a difference in the swift way his situation had been dealt with compared to ‘the way anti-Semitism cases have been handled’.

He said he would be appealing against the decision, pointing out that many of Labour leader Jeremy Corbyn’s senior aides had voted for other parties in the past.

Mr Campbell announced on Twitter that he had been expelled.

He tweeted: ‘Sad and disappointed to receive email expelling me from Labour – particularly on a day the leadership finally seems to be moving to the right place on Brexit, not least thanks to tactical voting by party members, including MPs, councillors and peers who back a People’s Vote.

‘I have been advised by lawyers with expertise in this field I have grounds for appeal against expulsion and shall do so. I am and always will be Labour. I voted Lib Dem, without advance publicity, to try to persuade Labour to do right thing for country/party. It is hard not to point out difference in the way anti-Semitism cases have been handled.

‘Plenty of precedent of members voting for other parties/causes. Some are now senior party staff. Approach also contrasts with our era when Tony Blair was being pressed by whips to withdraw whip for Jeremy Corbyn and others for persistently voting against Labour in Parliament, and he said no.’

Speaking outside his home in North London, Mr Campbell said: ‘I’m not going to leave the party just because some random email comes in telling me that I’ve been expelled. So I will definitely appeal against it and we will see where that goes.’

He claimed people in ‘senior positions’ in Mr Corbyn’s office had recommended voting against Labour. 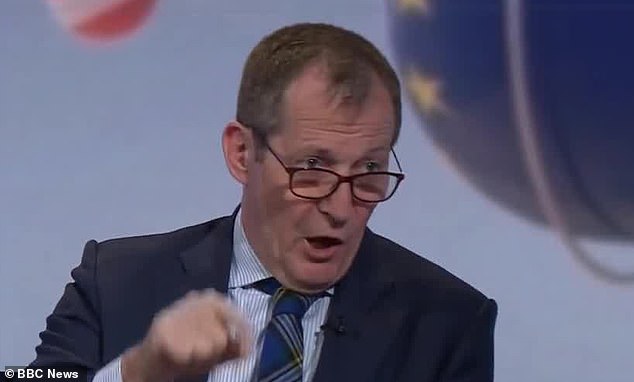 Alastair Campbell was today expelled from Labour after he admitted he had not voted for the party for first time in his life, in disgust at the party’s stance on Europe 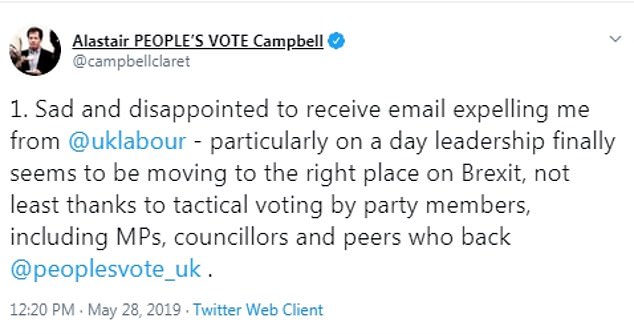 Mr Campbell declined to say who he would vote for in a snap general election. He said: ‘I want to vote Labour at the general election but that will depend on the policy that the Labour Party puts forward between now and then in relation to Brexit.’

Mr Clarke said Labour ‘should immediately withdraw its expulsion of Alastair’ and pledged to back the party at the next general election.

A Labour spokesman said its rules were that people who vote for other parties are automatically expelled, but those accused of anti-Semitism have to go through a separate disciplinary process.

Mr Campbell said there was a difference in the swift way his situation had been dealt with compared to ‘the way anti-Semitism cases have been handled’.

Labour MP Margaret Hodge backed him up and said: ‘So it takes 5 days for Labour to expel @campbellclaret but almost 3 years to expel prolific anti-semite Jackie Walker. This is why the EHRC are investigating’.

Momentum, Jeremy Corbyn’s grassroots movement, tweeted: ‘Alastair Campbell’s ‘sexed up’ dossier started the Iraq war and left a million dead. Being kicked out of the party is the least he deserves’.

Mr Campbell was Mr Blair’s chief spokesman from 1994 to 2003. He is now a key figure in the People’s Vote campaign, demanding a second referendum.

Tony Blair said he understood why his friend and former spin doctor had decided to vote Lib Dem.

He said: ‘I voted Labour. I said I was going to and I did although without any great enthusiasm frankly. But I did.’

Asked what he would say to Alastair Campbell after he admitted voting Lib Dem he said: ‘I understand why you did what you did. You wouldn’t be the only person I know who voted Labour all their lives who didn’t vote Labour in this election.’

Campbell has also been accused of spinning the result of the European elections  by claiming the remain parties came out on top.

Brexit Party leader Nigel Farage said it was another example of pro-EU politicians ‘moaning about every single election which they lose’. 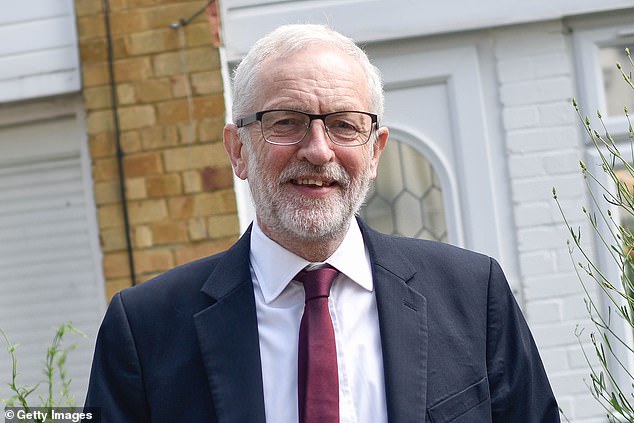 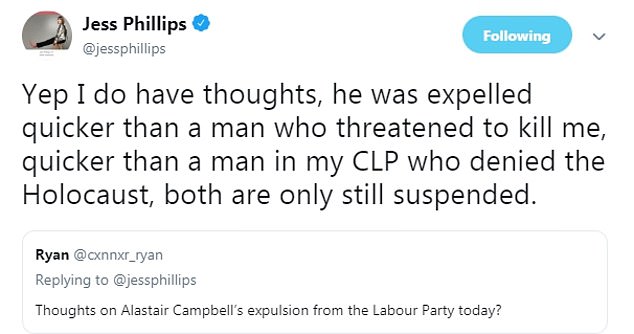 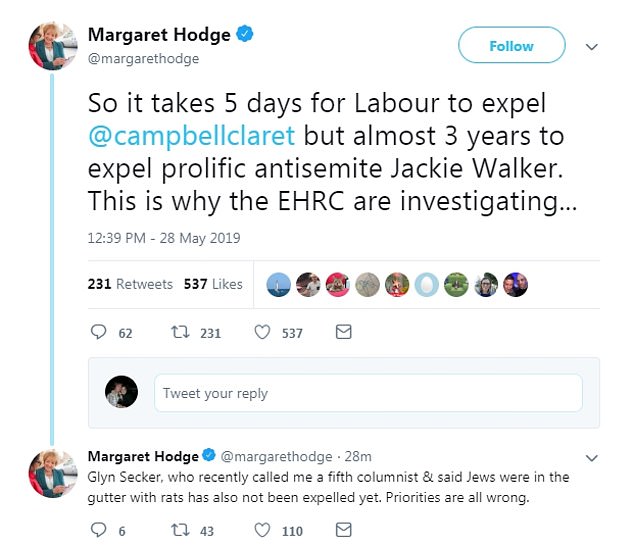 The rebuke came after some Remainers – including Campbell – argued that by adding up the total votes for anti-Brexit parties, Sunday’s poll results proved the public did not want to leave the EU.

Mr Farage was asked about the argument as he appeared on ITV’s GMB programme, with presenter Charlotte Hawkins claiming: ‘If you add up all the pro-Remain parties they did get a bigger percentage – 35.8 per cent versus the Brexit Party’s 31.6 per cent.’

But a furious Mr Farage replied: ‘This is absolute tosh. It is not a fact. Add up the Brexit vote, add up the Ukip vote.. add the Conservative vote… and you will find that Leave beat Remain’.

Elderly woman, 75, is stabbed to death with man 'known to victim' arrested
King Arthur's bridge will rise again
Nurse who ran London Marathon in NHS uniform misses out on a world record
Heathrow to spend £50million on new scanners which could end need to remove liquids from luggage
Tory MPs ready to vote no confidence in the govt over No Deal Brexit
Right-wing extremist, 18, who was obsessed with neo-Nazis is jailed for four years
Hilarious moment dog accidentally knocks car into reverse and drives around in circles for an hour
Meghan beams carrying Archie and walking her dogs as Harry boards a flight to Vancouver