Fans of Killing Eve in Britain are still waiting to see any of the second series of the hit UK drama – despite it now having been shown in full on America.

The first series finished with Eve having stabbed Villanelle after being fired from a secret MI6 probe amid questions remaining over group of assassins The Twelve. 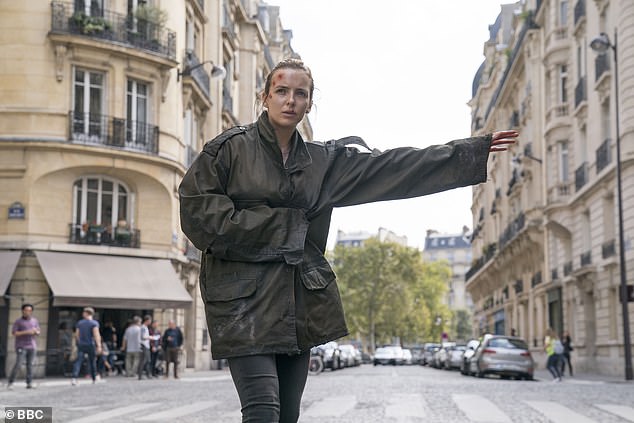 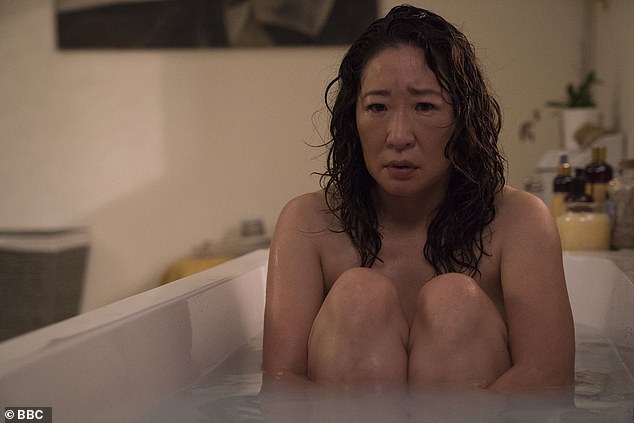 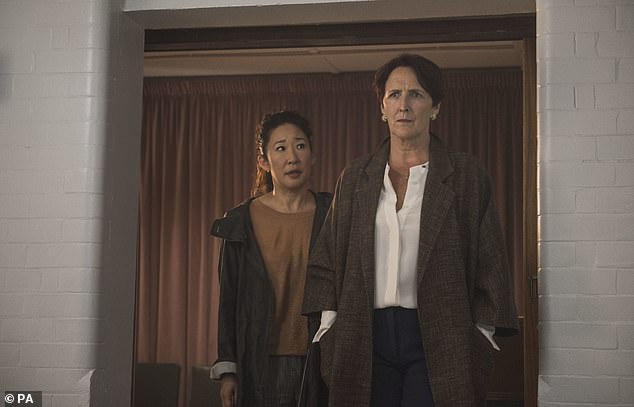 The second series aired on BBC America between April 7 and May 26, but UK viewers have had to wait because the BBC wants to release all eight episodes in one go.

The BBC has confirmed the entire second series will be available in Britain on iPlayer at some point next month, but an exact date has still not been confirmed.

The first UK trailer on February 14 showed Villanelle and Eve on each other’s trail – before Villanelle appeared in a second advert on March 8 in different disguises.

A third and final trailer for the second series was released on March 27, showing Villanelle looking disgusted in hospital, before Eve recalls stabbing the assassin. 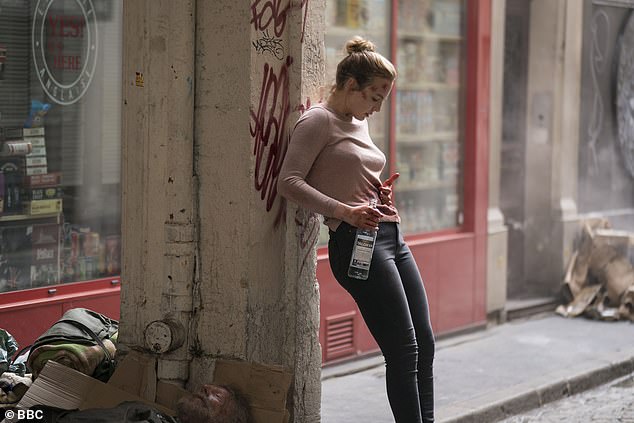 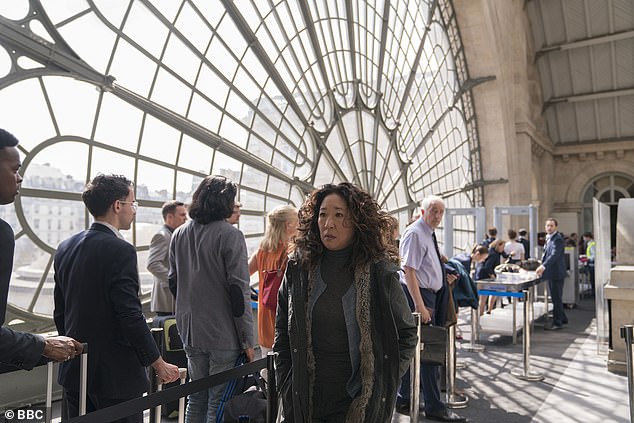 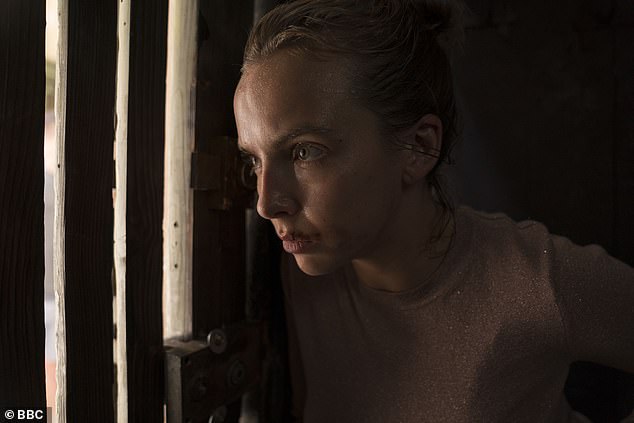 Comer picked up a Bafta for Best Actress for the role last month. She is pictured in series two

A synopsis of series two revealed Villanelle had disappeared without Eve knowing if she is dead or alive – and Eve was desperate to find her before someone else does.

Sarah Barnett, President of AMC Entertainment Networks, said series two would be ‘picking up exactly 36 heart-thumping seconds’ after the season one finale.

She said it was ‘packed with superlative performances and is as twisty, subversive, darkly funny, nerve-wracking and pleasurable as our fans could desire’.

Three trailers have been released as follows on February 14, March 8 and March 27:

Oh told Uproxx: ‘I feel like she is pushed to the limit in her, not so much pursuit of Villanelle at this point, but her dynamic with Villanelle and her pursuit of her job.’

Comer, 26, who is from Liverpool, picked up the TV Bafta for Best Actress for the role last month, while the show itself was named Best Drama at the awards in London.

New faces in the second series will include Nina Sosanya from Good Omens, Edward Bluemel from A Discovery Of Witches and Julian Barrett from Mindhorn.

Fleabag star Phoebe Waller-Bridge, who adapted series one from the Codename Villanelle book by Luke Jennings, is an executive producer for the second season. 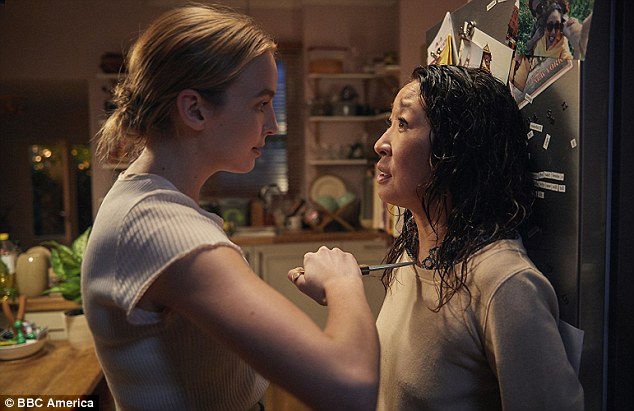 Villanelle, played by Comer, confronts Eve, played by Oh, at her home in Killing Eve series one 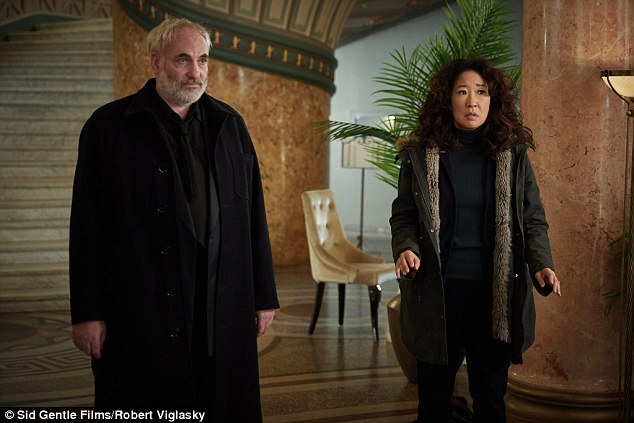 Konstantin, played by Kim Bodnia, and Eve are pictured in the final episode of series one 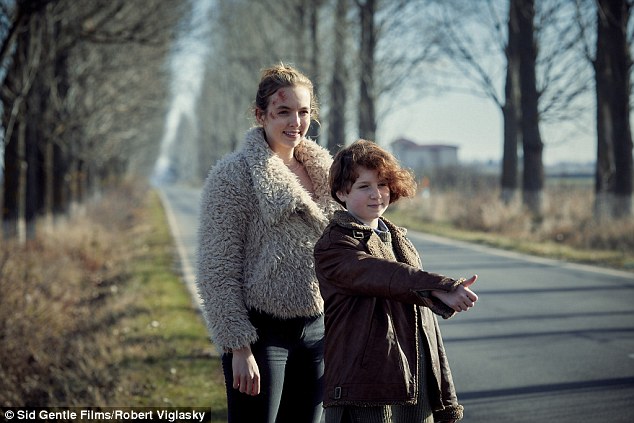 Villanelle is pictured in first series of Killing Eve, alongside Irina, played by Yuli Lagodinsky

SPOILER> The cliffhanger finale of series two ends with Villanelle shooting Eve and leaving her for dead, after the assassin imagined living with Eve together in Alaska.

It also sees Eve kill handler Raymond, played by Adrian Scarborough, with an axe – as Villanelle tells her: ‘It’s OK if you feel weird. You just killed someone for the first time.’

Co-showrunner Sally Woodward Gentle revealed the producers had considered if the duo should ‘do a Thelma and Louise’, but added: ‘Then what do they do?’

She told The Hollywood Reporter that Eve would ‘very quickly realise that she had been deluding herself about the reality of what that life would actually be’.

Ms Gentle said the already-announced third season would be ‘something that feels bold and different from the one before and you can explore big ideas’. <SPOILER 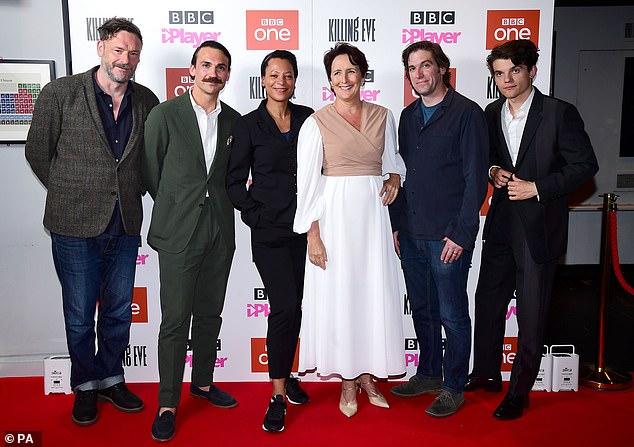 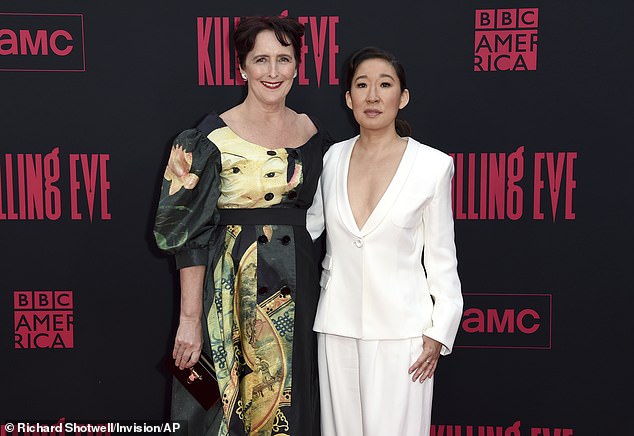 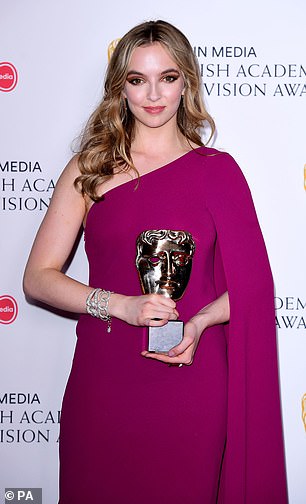 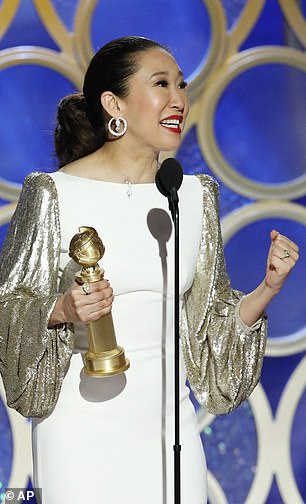 The BBC has not given a UK release date for series two, but the corporation has previously said it would have to wait until all the episodes had been shown in the US.

BBC America is the commissioning broadcaster and must therefore show all of the episodes in the US before they can be released in one go on iPlayer in Britain.

A BBC spokesman said of the different release models: ‘The decision to make it a box set was based around how we thought audiences would enjoy the programme.

‘We are still experimenting with different release models and we know last time audiences really loved the fact we did this as a box set so they could binge.’

The show is the corporation’s most-requested series ever on iPlayer, with 1.5million viewers tuning in to watch the first series finale in Britain.