Their age gap romance has been a main story line since the start of the series.

And Chloe Sims, 37,  revealed that the door is still wide open for Dan Edgar, 28, to pursue her romantically as she confirmed she loved the star in Sunday night’s episode of the ITVBe show.

Despite Dan openly admitting he was two-timing the blonde with his ex Amber Turner, 25, earlier on in the series, Chloe was not shy in opening up her heart to him once again during a heartfelt conversation. 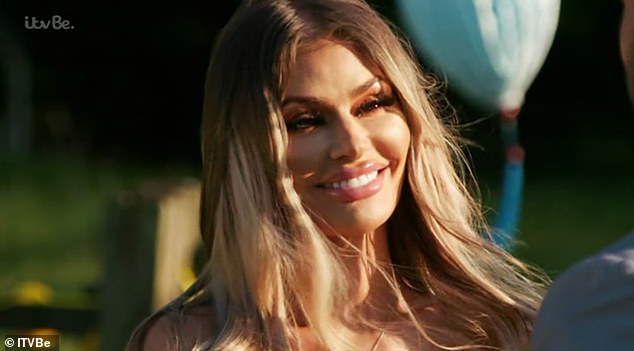 Declaration: Chloe Sims, 37, revealed that the door is still wide open for Dan Edgar, 28, as she confirmed her love for the star in Sunday night’s episode of the ITVBe show

The mother-of-one and the hunk discussed the ups and downs they have encountered over the past few weeks – and Dan praised Chloe for being so understanding after he called time on their fling.

In response, the busty blonde told him: ‘I do love you.’

Seemingly happy to hear these words, Dan embraced the star in a tight hug before the show drew to an end – possibly hinting that their romance could be revisited in the next season.

Viewers were then treated to a montage of different characters dancing in the sunshine and a clip was aired showing Dan planting a kiss on Chloe’s cheek. 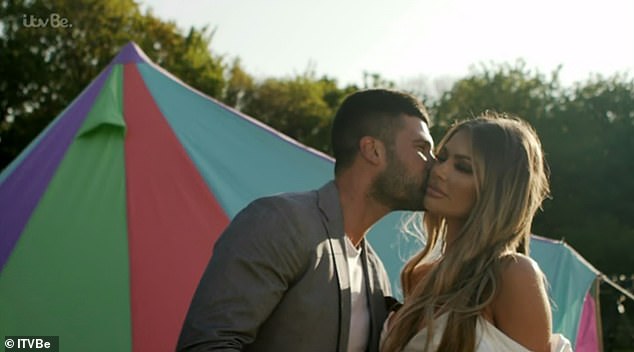 Smooch: Viewers were also treated to a clip showing Dan planting a kiss on Chloe’s cheek 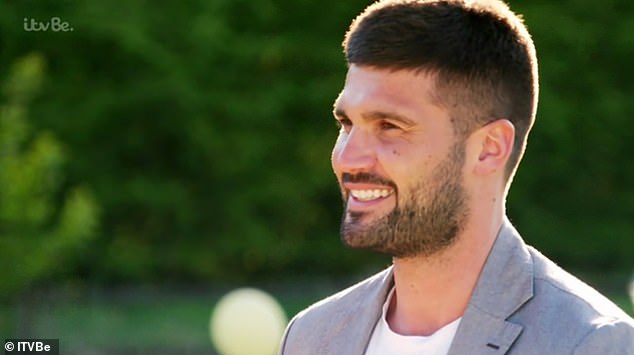 Happy chap:  Dan praised Chloe for being so understanding after he called time on their fling

The episode focused on friendships, romance and new beginnings as the gang headed to Southend-on-Sea – which was worlds away from the idyllic destination of Thailand where the season began.

Pete Wicks, 30, and Gatsby, 30, called a truce as they met on the pier in the seaside town – six months after they first fell out.

In a bid to impress Pete, Gatsby delivered him a pizza as a peace offering – in memory of their bust up where the hopeful rapper slapped a take-away pizza out of his co-star’s hand during a fiery row. 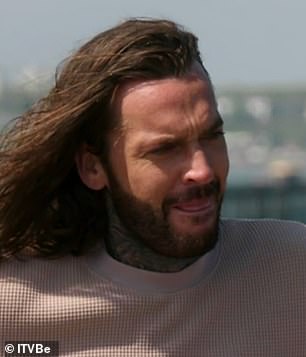 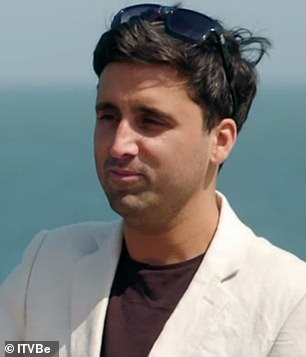 Pals: Pete Wicks, 30, and Gatsby, 30, called a truce as they met on the pier in the seaside town – six months after they first fell out

Reflecting on the past, Gatsby stated: ‘I wanted to do something nice for you, I thought I would get you a nice pizza as last time we had pizza..’

Butting in Pete added: ‘You slapped it out of my hand and ran away with it.’

He then asked: ‘Does this signify we are mates?’

Gatsby confirmed: ‘I know its cheesy but we are more that just friends we are good friends.’ 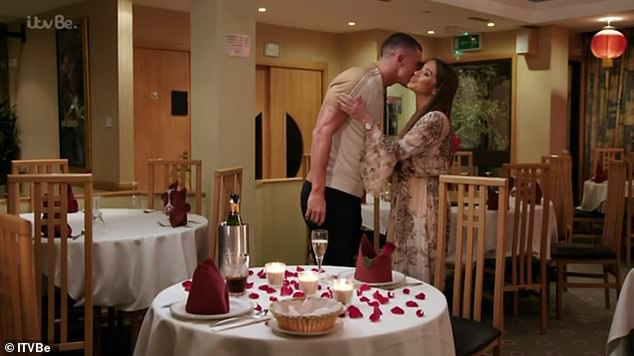 Elsewhere, Chloe Brockett, 18, and Harry Lee’s, 23, romance blossomed as the romantic semi-pro footballer invited her to a surprise dinner date.

Gushing over the beauty, Harry confirmed he is ‘proper into’ the star.’

He added: ‘I aint looked at another girl since we been talking, and I hope that is the same for you.’

The heart-throb did not ask her to be his girlfriend but he confessed: ‘We are on the right track and you do mean a lot to me.’

Another romance appeared to take the next step too as Shelby Tribble, 26, asked Tom McDonnell, 23, to become exclusive with her. 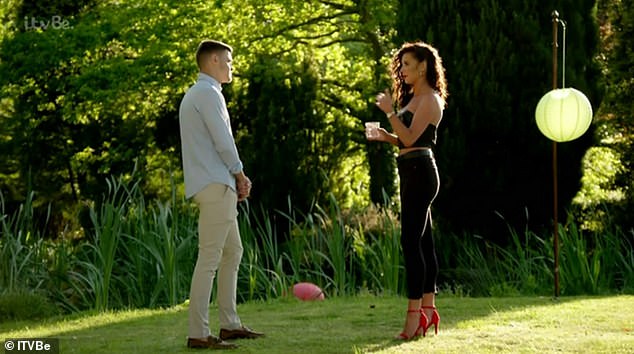 Exclusive: Another romance appeared to take the next step too as Shelby Tribble, 26, asked Tom McDonnell, 23, to become exclusive with her 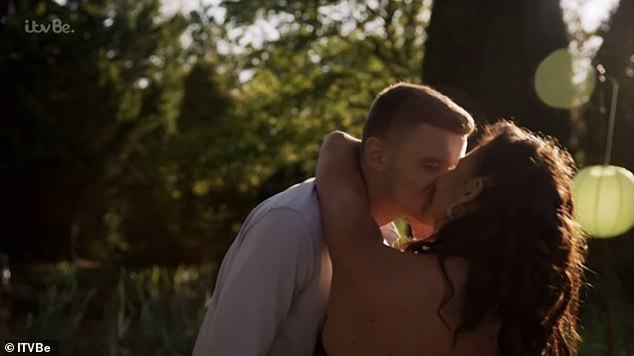 Pucker up: The new couple enjoyed a kiss on screen to cement their new sttaus

Happy to give things a go with the brunette, Tom grinned from ear to ear but warned her: ‘I wont be second fiddle’ after he previously gave her an ultimatum when it came to light that she was speaking to her former flame Sam Mucklow, 27.

She claimed was ready to ditch Sam, Shelby said: ‘Me and Sam have got history, but I have put it to bed because I like the way we are going a lot, it’s done, it is put to bed trust me its done.’

Content with Shelby’s admission Tom beamed as they launched into a kiss. 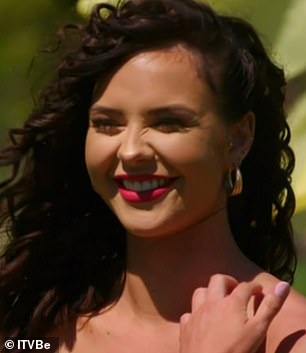 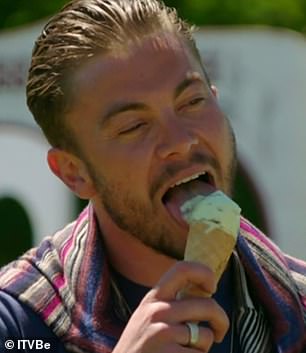 Over for now: Sam Mucklow, 27, and Shelby agreed to end their flirting out of respect of her new relationship

Shelby taking her relationship up a notch with Tom followed on from her speaking to her previous love interest Sam.

She informed the tattooed star that their flirting had to end out of respect of her moving on.

However, Sam, whose romance with Shelby came to an end after he made a move on Demi Sims, 22, shared that he was affected by Shelby being happy with another man.

He revealed: ‘My heads been all over the gaff’ and that ‘It eats me up’ that things ended between them.

Viewers finally become acquainted with one of Demi Sims’ former flames as the bi-sexual star met her ex Meg for a drink to apologise for ‘vanishing’ after they had a summer of fun. 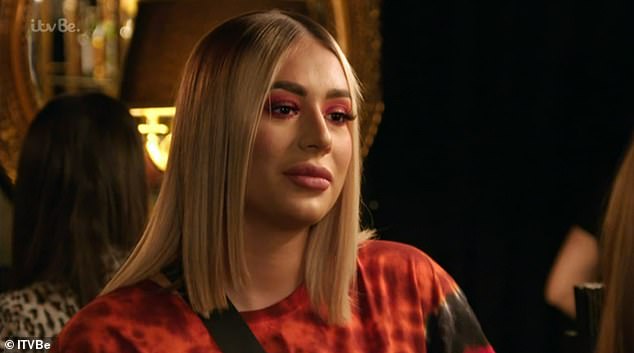 Rekindling a romance: Viewers finally become acquainted with one of Demi Sims’ former flames as the bi-sexual star met her ex Meg for a drink – which ended in them kissing

During the conversation, Meg spoke honestly about their fling and questioned if she did something wrong.

Meg began: ‘Demi, to be be honest I don’t know what happened we had a really good summer and then you just vanished.’

Owning up to her wrongdoing, Demi responded: ‘Yeah, I am really sorry about that Meg and that’s why I have brought you here to apologise to you.’

The duo payed one another compliments on how they looked before Demi urged: ‘Come here’ before they kissed.

Chloe’s bold use of the L word comes after she previously declared her strong feelings for Dan at the start of series after they hooked up on holiday. 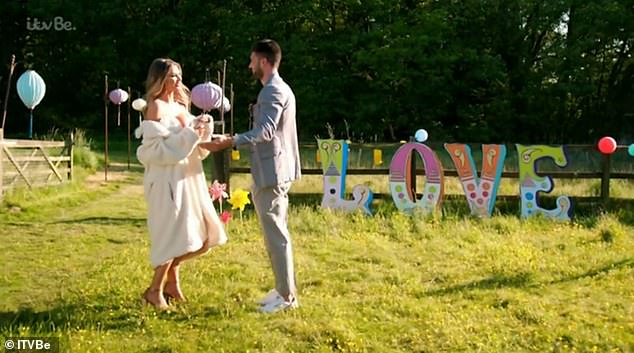 Open door? Chloe’s bold use of the L word comes after she previously declared her strong feelings for Dan at the start of series after they hooked up on holiday

As they sat on the beach in Asia, Chloe admitted: ‘You know that I’ve always thought you were beautiful and a nice person. So for you to say you had those feelings, I was really happy. There isn’t any pressure from me.’

Chloe didn’t hold back her fondness for Dan as she added: ‘Now I want [the relationship] more than I wanted it two days ago, I feel like you’ve started to pull away.

‘I’m on your side, and I’m not going to pressure you. I would be upset if we had to shut it down because of others.

‘I’d marry you right now. We’ve done everything how we’re supposed to. We should just carry on and not let any drama get in between us’, the mother-of-one added, before embracing Dan with a warm hug.

Later on in the series she accused Dan of breaking her heart as they went their separate ways after he confessed he was not ready for a relationship. 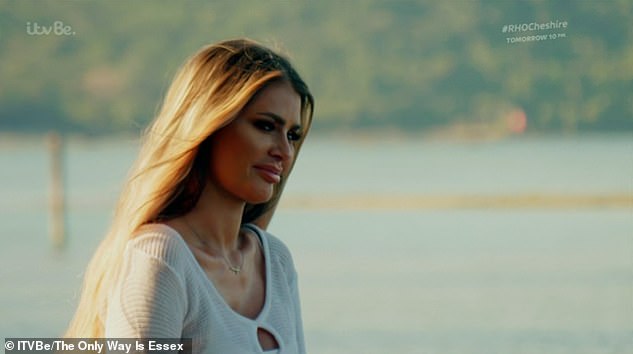 An open book: The reality star, previously laid her cards on the table as she admitted to Dan she’d ‘marry him right now’ during their candid talk 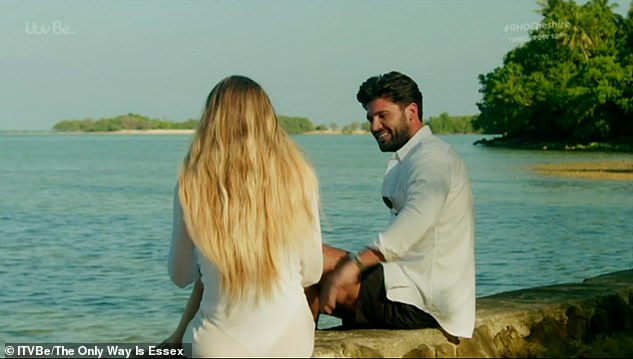 Full circle: TV personality Chloe sat on the beach with Dan at the beginning of the series to share her feeling for him 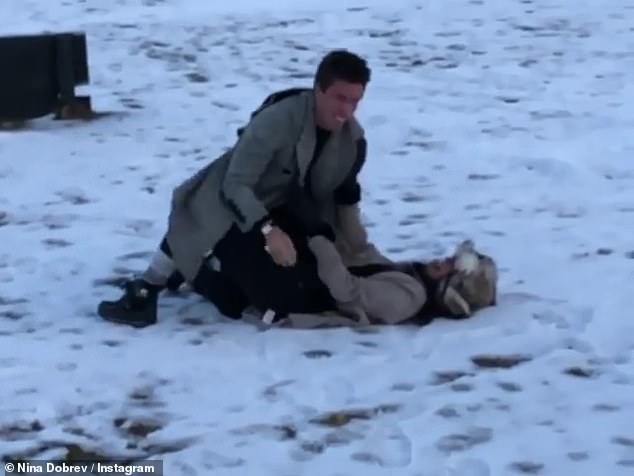 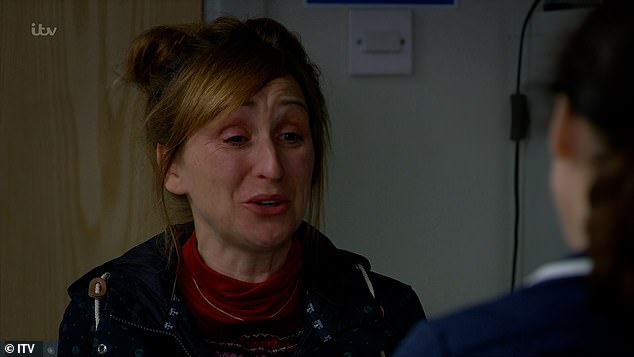 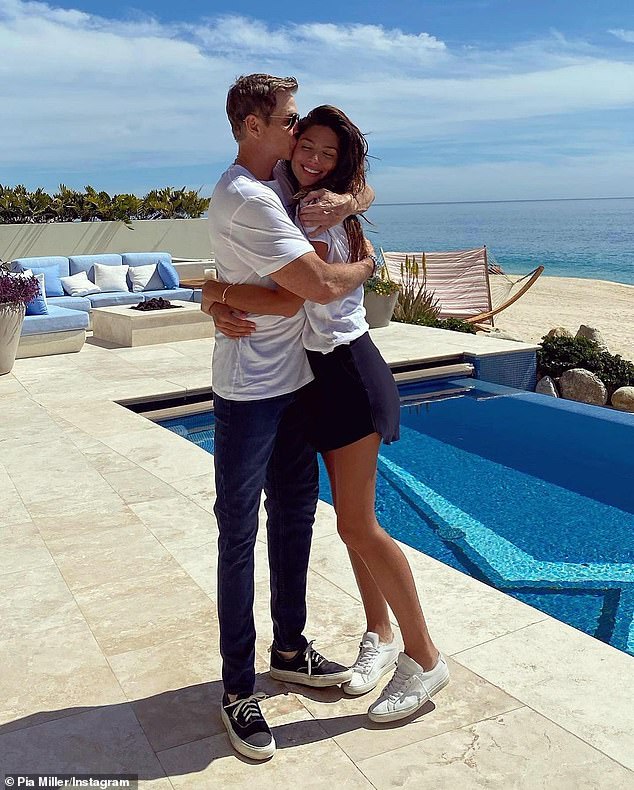 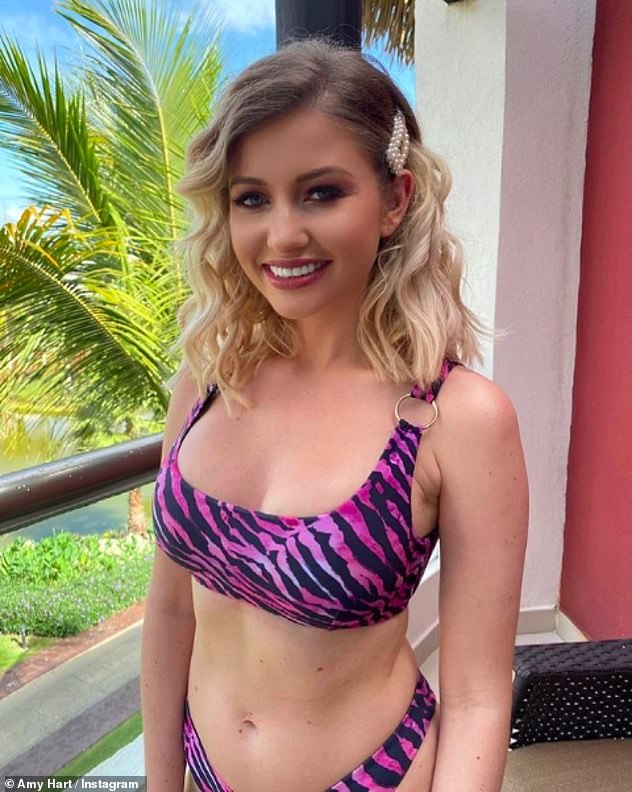 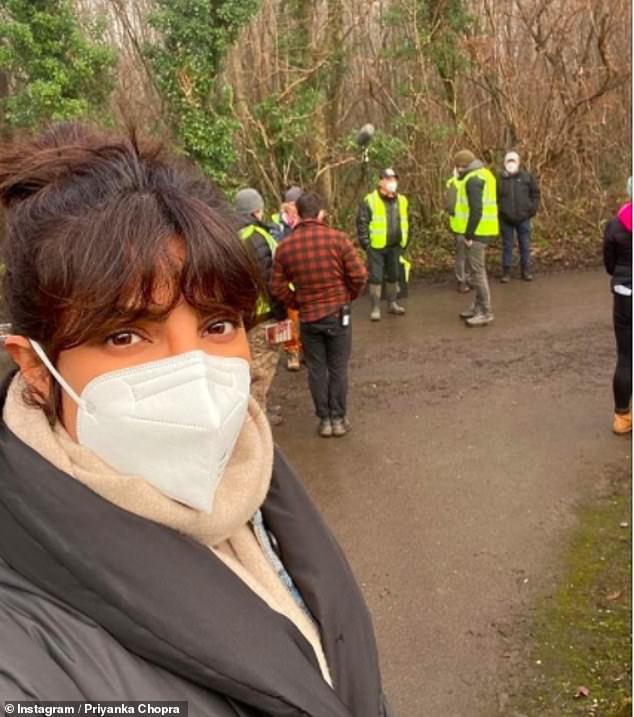 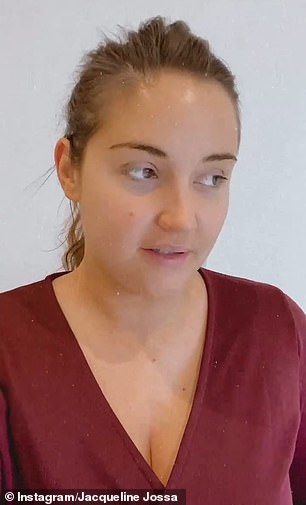 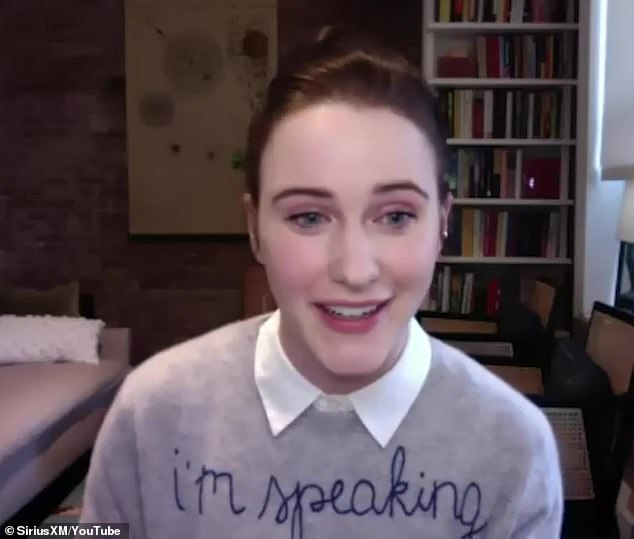 Rachel Brosnahan has had hat fittings and hasn’t seen a page of program for season 4 of Mrs. Maisel