Former team captain Kevin Bennett was looking through an old photo album when he stumbled across the image, taken in 1979 and showing the team in their old blue kit at Excalibur Primary School, in Alsager, Cheshire.

He then took it to a friend’s surprise 50th birthday party and he and three friends decided to track down the rest of the team using Facebook.

Kevin spent four months contacting his old teammates, including some who lived abroad, before organising a reunion. 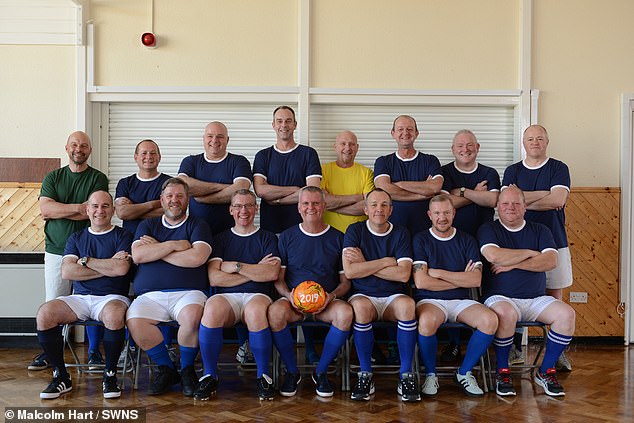 Last week, the team all posed in their kit at Excalibur Primary School to celebrate Kevin turning 50.

Kevin, a sales manager form Newcastle-under-Lyme, said: ‘It has been amazing and I’m very proud and grateful to everyone who joined in.

‘The idea started when I went to a surprise 50th birthday party for a classmate and went along with three other team members.

‘I brought the old photo along for a laugh and after a few beers someone piped up and asked ‘Why don’t we try and get everyone together and recreate the photograph?’

‘I thought it was brilliant idea. I wanted to something unique to mark my 50th birthday but was aware it would be quite a challenge.

‘I started tracking down the team on Facebook and got mobile numbers and then created a WhatsApp group. 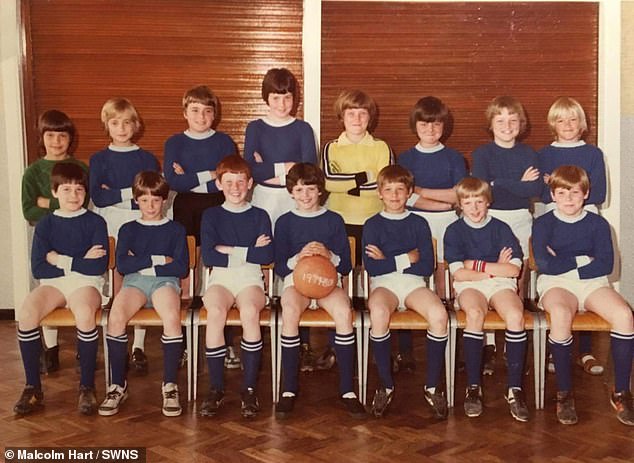 ‘Just about everyone was straight forward to track down apart from one lad, Quentin Bowers but we got him in the end.

‘His brother is in the police and knew a mutual friend and we got hold of him that way.

‘I talked to him on the phone and he was on business in Panama. He was well up for taking part.’

Kevin arranged a date and time for the team to meet up at Excalibur Primary School and arranged for former teammate Malcolm Hart, a freelance photographer, to recreate the snap.

Luckily, the whole team turned up and they even wore specially commissioned kits recreating the blue kit from 1979.

Kevin said: ‘I was pretty nervous in case some people didn’t show up but it was a great effort from the lads.

‘We had a look around the school and remembered how some lads used to get into trouble with the headteacher.

‘Some of us have lost a bit of hair and put on a few pounds but the team spirit and camaraderie was still the same. It was a great and emotional day.’

Photographer Malcolm, from Alsager, added: ‘It was a big challenge taking the picture and being in it but I did it on a timer.

‘I was delighted to be able to take part.’

Kevin and the team are now hoping to organise five-a-side games against other old-boy primary school teams.