Zara Tindall kicked off the long weekend on horseback today as she prepared to take part in the Saracen Horse Feeds Houghton International Horse Trials, at Houghton Hall, Norfolk.

The Queen’s granddaughter, 38, donned a top hat and dressage uniform to put her horse Watkins through trials.

Teaming the smart double-breasted jacket with white slacks, the daughter of the Princess Royal looked smart as she rode.

Zara couldn’t help but smile during her outing as she soaked up the sun on day two of the trials. 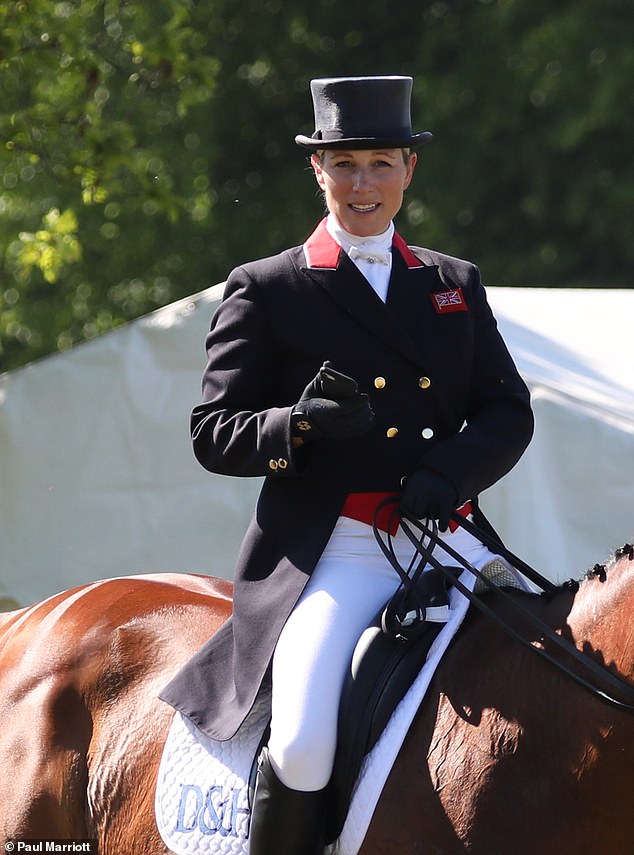 Zara Tindall was back to to her equestrian roots today as she donned a horse at the Saracen Horse Feeds Houghton International Horse Trials, at Houghton Hall, Norfolk

Showing that she is ever the practical royal, the mother-of-two tied her blonde hair back and kept her make-up to a minimum.

The three-day-festival is a regular fixture in the royal diary, with William and Kate attending the event last year with their children Prince George, five, and Princess Charlotte, four.

Zara, who is the daughter of Princess Anne and Mark Phillips, is an avid rider and won a silver medal at the 2012 Summer Olympics as part of the Great Britain Eventing Team. 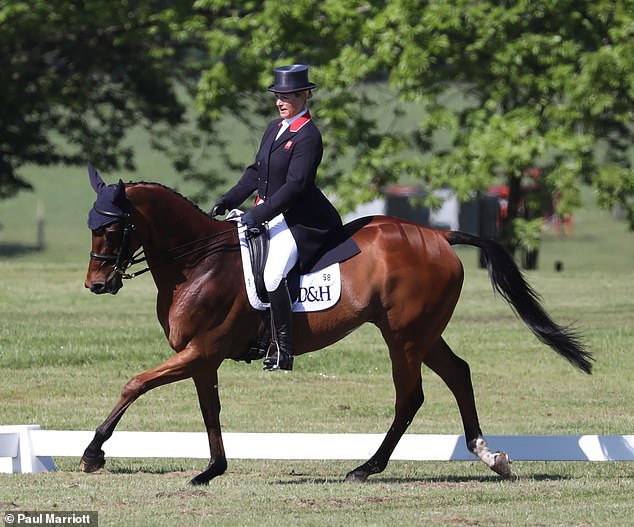 The Queen’s granddaughter, 38, donned a top hat and dressage uniform to put her horse Watkins through trials

Events such as Houghton have proved an opportunity for the royals to get together, with William and Kate joining the family to attend the Land Rover Novice and Intermediate Horse Trials at Gatcombe Park in Stroud, Gloucestershire in March of this year.

The Cambridges also attended the Houghton horse trials last year, and were spotted with their two eldest children at the event in 2016, along with friends James Meade and his wife Lady Laura Marsham.

The event gained international status in 2007 and now welcomes more than 700 horses and their riders every year.

It also hosts the only British leg of the FEI Eventing Nations Cup, a series where teams from as far afield as Australia and New Zealand battle it out to top the table at the final event at Boekelo, Holland, in October. 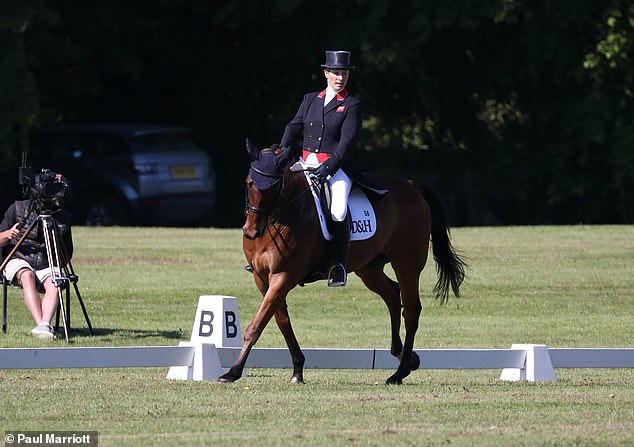 Olympian horse-rider, Zara couldn’t help but smile during her day at the races. Showing that she is ever the practical royal, the mother-of-two tied her blonde hair back and kept her make-up to a minimum

Mike Tindall recently revealed that he heard about the birth of Prince Harry and Meghan Markle’s son, Archie, via a message on the royal cousins’ WhatsApp group.

Speaking to The Telegraph, he said: ‘[Harry will] be a great dad. We’ll just let him ease into it himself, find out his own way. The thing is, we’re so lucky with ours; ours have always slept so hopefully they’ll get that as well.

‘Obviously, he’s godfather to Lena, but we’ve got a great group of young ones in the family now. Lena and obviously Louis are similar ages and Mia’s sort of in between Charlotte and George, and then you’ve got Peter’s children Savannah and Isla who are just a little bit older.

‘James (Viscount Severn, Prince Edward’s son) is, well not exactly the ring leader, but he’s the oldest. So, yeah, it’s going to be a good little group. And Harry, he’s busy, but he loves playing with them all and he’ll be a good dad.’

Meghan King Edmonds jets off on Mexico vacation without kids four months after birth of twins
Reckless biker is jailed after dodging incoming traffic and running red lights in mass ride-out
Brazil invaded by venomous yellow SCORPIONS as climate change pushes them into major cities
Mother convicted of FGM on her daughter, 3, is jailed for 13 years
Explosion targeting western tourist bus injures 17 near new museum at Egypt's Giza Pyramids
Corbyn ally Andy McDonald accuses BBC of trying to help the Tories win
Top psychologist busts the toxic myths holding women back in the bedroom
Pesticides and fertilisers have become the largest human source of sulphur in the environment