Speaker Nancy Pelosi said Wednesday that she will not proceed with impeachment proceedings against President amid pressure from some in her party to do just that.

She convened Democratic lawmakers for a meeting Wednesday morning in the Capitol and said afterward while they believe Trump has engaged in a ‘cover-up’ the party will proceed with its investigations as it has been. 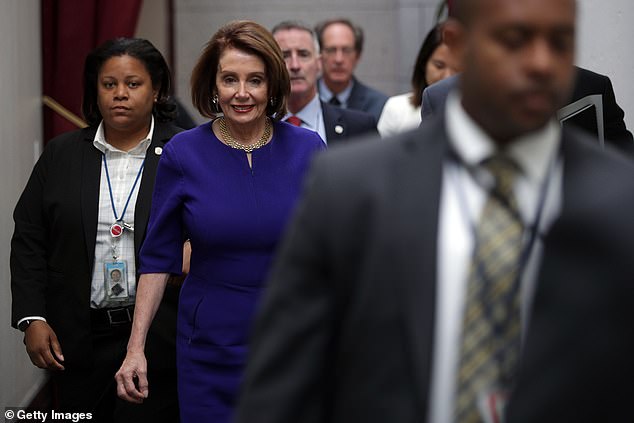 Pelosi hosting a closed-door meeting with House Democrats on Wednesday at the Capitol to try to rein in lawmakers who want to see impeachment proceedings begin.

The six committee chairman leading investigations against Trump made a presentation as did a pro-impeachment faction, lawmakers in the room said afterward.

Pelosi said it was a ‘respectful’ gathering and she hit back at an early morning tweet from Trump who charged Democrats with sacrificing their legislative work to investigate him.

‘We do have our legislative agenda that we’re moving forward on. It was a very positive meeting, a respectful sharing of ideas, and I think a very impressive presentation by our chairs,’ Pelosi said.

‘The Democrats are getting ZERO work done in Congress. All they are focused on is trying to prove the Mueller Report wrong, the Witch Hunt!,’ the president complained on twitter Wednesday morning before Democrats met.

The impeachment talk among Democrats heated up in the wake of former White House counsel Don McGahn’s refusal, at the White House’s request, to comply with a subpoena for his testimony on the Russia investigation and his testimony outlined in Mueller’s report.

His refusal to appear Tuesday set off a wave of fury among Democrats.

Democratic lawmakers said afterward that Pelosi was able to tamp down on some members’ call for Trump’s head.

‘Nancy still prevails in persuading our caucus to keep your powder dry on that one,’ Rep. Gerry Connolly said afterward of the impeachment talk.

Although some lawmakers cautioned that continued defiance by the president would heat up impeachment talk again.

‘I think that we’re seeing the drumbeat moving in that direction, the more he defies us,’ Democratic Rep. Katie Hill said. ‘But I don’t think that the process is as a whole, is there.’