Police in Sacramento have come under fire after a video of officers restraining a 12-year-old boy on the ground and placing a split hood over his head during his arrest went viral.

On Tuesday, two female officers from the Sacramento Police Department say they saw Isaiah Downs, 12, running away from a security guard at a local carnival and decided to lend chase.

The boy, just four-foot-eight and weighing less than 80lbs, had allegedly been ‘trespassing and stealing’, according to police.

A video captured by a horrified bystander shows the two officers and the private security guard wrestling with the boy, who asks multiple times to be let go as he tries to squirm from the officers’ grip.

‘You’re doing this to a minor… his parents should be here,’ the man videotaping the arrest can be heard calling out. 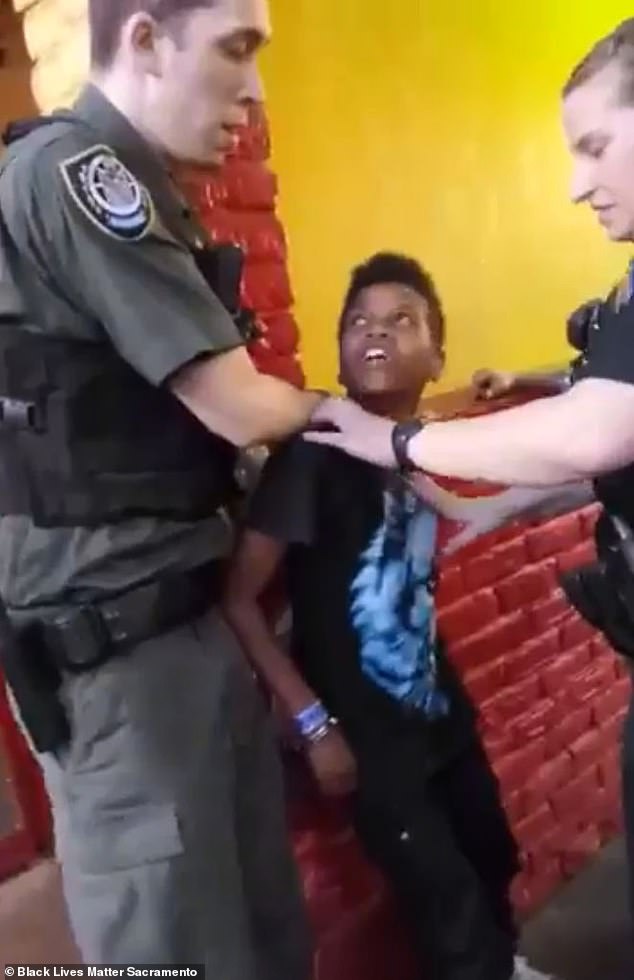 Police in Sacramento are under fire after a video showed two officers arresting a 12-year-old boy, restraining him and placing a split hood over his head 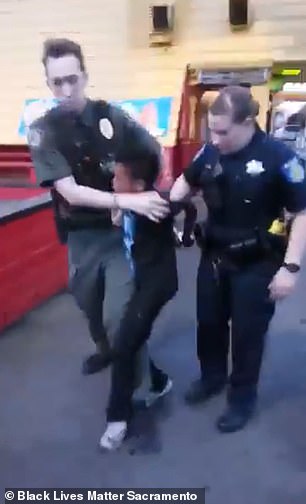 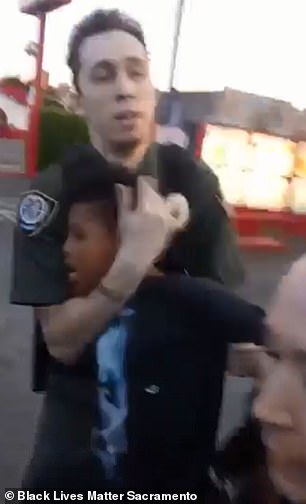 Tensions escalate further as Isaiah is marched towards a squad car and starts kicking out at the officers before allegedly spitting on one of them, saying, ‘Yeah, I spit on you all… How do you like that s***.’

As one of the officers appears to wipe spit away from her cheek, the private security guard can be seen restraining the boy’s head, which on-lookers interpreted to be a chokehold.

‘You can’t be chocking on him like that. What’re you doing,’ the man recording calls out. ‘Get your hands off his f****** neck.’

An officer can be heard saying ‘stop kicking’ to Isaiah as they try to place him in the back of a patrol car, but the young boy appears to continue resisting.

Two officers then jostle him to the ground face-first, restraining his back and legs with their knees, to calls of ‘Police brutality’ from those watching on.

During the arrest, officials from the Sacramento PD say Isaiah spat in an officer’s face ‘multiple times’, and the decision was ultimately made to place a ‘spit mask’ over his head. 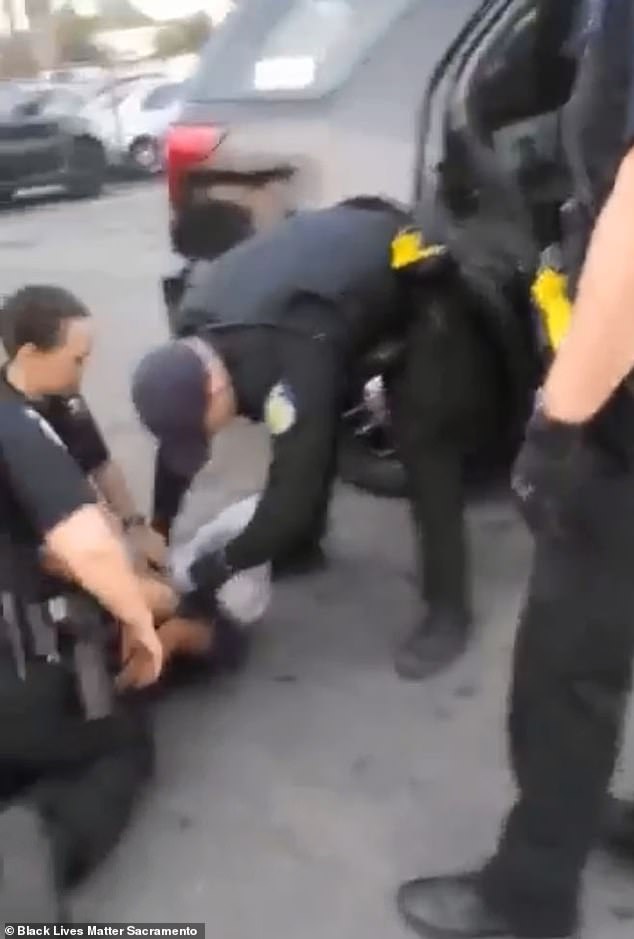 Isaiah is marched towards a squad car and starts kicking out at the officers before allegedly spitting on one of them, saying, ‘Yeah, I spit on you all…How do you like that s***’ 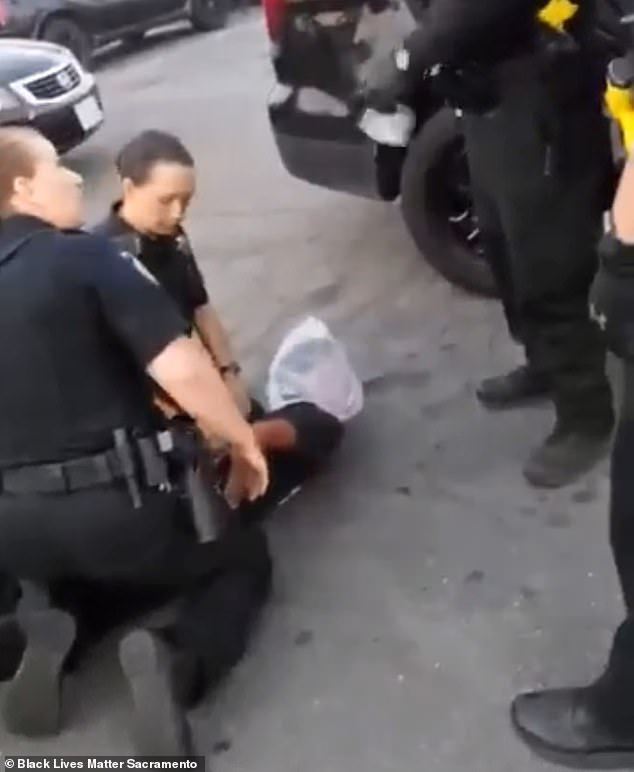 During the arrest, officials from the Sacramento PD say Isaiah spat in an officer’s face ‘multiple times’, and the decision was ultimately made to place a ‘spit mask’ over his head 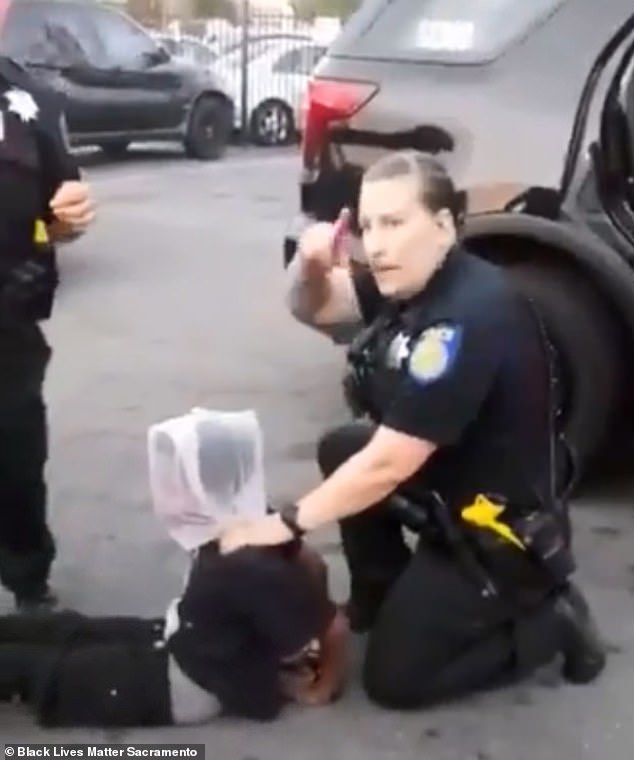 Despite the outcries that they acted excessively in the way they dealt with the four-foot-eight boy, Sacramento PD say the officers acted according to protocol

Latoya Downs, Isaiah’s mother, described the moment she heard of her son’s arrest to , and said it reminded her of several high-profile news stories where black Americans were killed by police during an arrest.

‘I started getting nervous. My hand started trembling. I’m like, ‘Oh my god, I hope this is not another Tamir Rice,’ she said.

Downs said that when she arrived on the scene in a North Sacramento parking lot she was fearing for her son’s life.

The family’s attorney, Mark T. Harris, agreed saying, ‘we will not tolerate … our young people being treated in the way this young man was treated.

‘We want to make sure that the greater Sacramento community, the state of California and the world is aware of what happened to this young man, who was doing nothing more than trying to enjoy the benefits of a neighborhood carnival,’ Harris said in a video with Isaiah and his mother.

‘The kid’s a good kid,’ he continued. ‘He’s a little bitty kid. None of this should’ve come down the way it did.’ 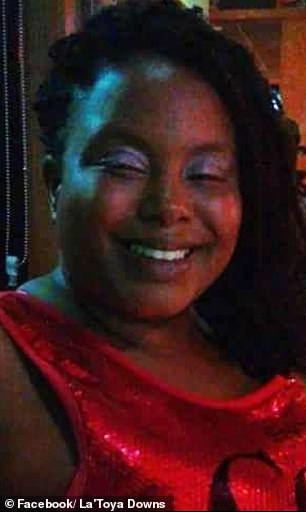 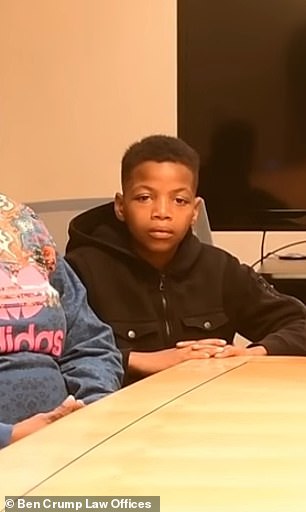 Latoya Downs (left), Isaiah’s mother, said she feared for her son’s life and worried that he may have become the next Tamir Rice of Stephon Clark

Despite the outcries on social media that the officers acted excessively in the way they dealt with the four-foot-eight boy, Sacramento Police Sergeant Vance Chandler believes the deputies acted according to protocol.

‘The officers were trying to protect themselves,’ Chandler said of the spit hood being placed over the boy’s head. ‘The subject spit on the officer in the face multiple times and they put a spit mask on him.’

Chandler said the incident is being looked into, and investigators will be reviewing the officer’s body camera footage which will be released to the public soon.

The only crime Isaiah was cited for was spitting, but his family insist he never should’ve been detained in the first place.

The Downs family say they’re exploring their legal options and have asked the Sacramento Police Department for an apology.

'The president did not say that!' Giuliani says Trump by no means mentioned Flynn with Comey
Inside Kim Kardashian's new $14million Miami luxury condo gifted by husband Kanye West for Christmas
Florida professor left letter blaming custody battle before killing daughter, 3, and hanging himself
Shocking moment a driver appears to kick another man in the head while parked next to POLICE car
Huge rise in number of sexually transmitted diseases in US armed forces including chlamydia
Wife of NASA astronaut who 'hacked her bank account' from space reveals messy custody battle
Dick van Dyke hasn't aged in 56 years as he is seen looking like his character from the 1964 film
Prince Harry's series on mental health involves visits to hospitals and treatment centres in the UK