A charity has warned celebrity mothers need to stop posting photos of their babies sleeping in positions which could increase the risk of cot death.

Famous women may be ‘normalising’ unsafe childcare by taking pictures of their infants sleeping swaddled in blankets or wearing hats, according to experts.

Pillows, bulky or bedding or anything covering their face or head could put babies at risk of suffocating or overheating.

Kim Kardashian and British reality star Amy Childs have posted photos of their babies sleeping in cots with blankets. And Hilary Duff shared an image of her daughter asleep while wearing a hat. 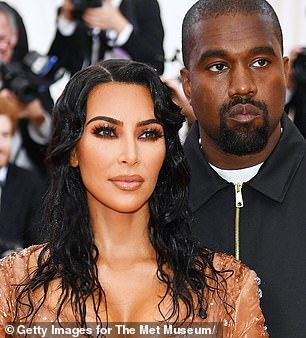 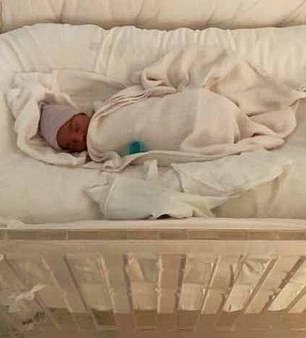 ‘In the age of social media, celebrities have more influence than ever over parents and consumers,’ said Jenny Ward, acting chief executive of The Lullably Trust.

‘When it comes to sharing images of their babies, it is important for them to keep in mind that their photos might be unintentionally promoting unsafe practices or products.

‘Around five babies a week die of SIDS in the UK and the latest available figures showed that number went up in 2016.

‘It is vitally important that parents are aware of advice on how to sleep their baby safely – if all parents had access to this information many lives could be saved.

‘However, images depicting celebrities sleeping their babies unsafely give mixed messages to parents and make this task much more difficult.’ 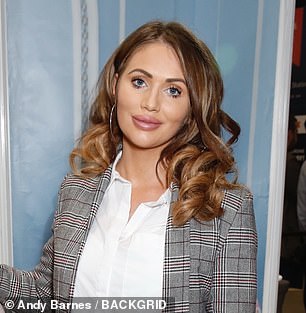 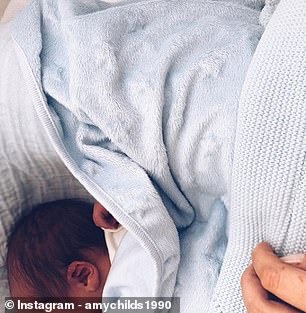 Amy Childs, a former star of the reality show The Only Way is Essex, gave birth to her son last year. The Lullaby Trust warns babies shouldn’t be put to sleep on their side or beneath loose blankets which cover anything above their shoulders 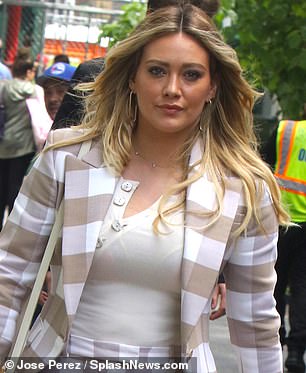 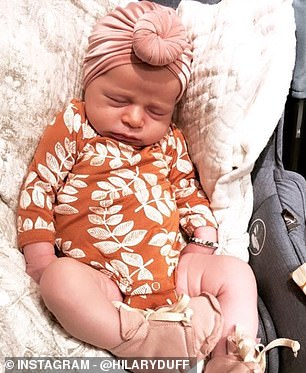 SIDS, also known as cot death, is the sudden and unexplained death of an apparently healthy baby – it usually happens while they are asleep.

WHAT IS A SAFE SLEEPING ENVIRONMENT FOR A BABY?

Babies should be put to sleep on their back on a flat mattress which is clear of pillows, loose bedding or other objects.

Babies should sleep in a separate cot or Moses basket in the same room as their parents for the first six months of their life.

Parents should make sure babies’ heads and faces are not covered by hats or other materials while they are in bed.

Covering a baby’s head can cause it to overheat, raising the risk of cot death.

The child may be covered by a light sleeping bag or bedding, but this shouldn’t cover them above the shoulders.

Parents shouldn’t share a bed with their baby if they’ve been drinking alcohol, and shouldn’t smoke in the same room as the baby.

Although the exact cause of the tragedy isn’t known, making sure a baby is sleeping in a safe position is believed to lower the risk of it happening.

The NHS says to sleep safely a baby should be laid on their back on a flat, firm mattress and should not have their head covered by a hat or blanket.

And the Lullaby Trust added a baby’s bed should be kept clear of pillows or loose or bulky bedding, which a baby could become tangled in or smothered by.

Beds which are too soft may also cause babies to overheat, a possible cause of cot death according to the charity, or block their airways if they roll over.

Ms Ward added: ‘It is known that products featured in celebrity photos tend to become popular with consumers.

‘Parents are already faced with an overwhelming number of baby products and working out what to buy for a new baby can be difficult and confusing.

‘Many people make the reasonable assumption that if an item is used by a celebrity and sold on the high street it is okay for their baby. However, we know that this is not always the case.’

The charity warned against the use of sleep pods or nests for babies, which don’t comply with safe sleeping advice recommending the use of a flat bed.

Famous people posting photos of their babies sleeping on their front or side, on soft surfaces, wearing hats or with objects in their cots ‘undermines’ good advice, The Lullaby Trust added.

A spokesperson for Amy Childs said her daughter, Polly, is in a cocoon in the picture above so would not have been able to roll over with the blanket.

‘The guidelines are very unclear however and do change on a regular basis,’ Ms Childs’ spokesperson said.

‘Amy has two beautiful children and child safety is always at the forefront of her mind.’

MailOnline has contacted publicists for Kim Kardashian and Hilary Duff for comment.

Two Scandinavian women tourists are found dead with their necks slashed in Morocco
Parents should be banned from dropping off children in new fight on air pollution say health chiefs
We have lift-off! Russian Soyuz rocket successfully launches three astronauts to the ISS
Terrorist Brenton Tarrant's grandmother says he was a 'good boy' who came home at Christmas
The Queen is to attend nuptials of Lady Gabriella Windsor
Buzz Aldrin SKIPS moon mission 50th anniversary reunion to take photos for a private jet company
Vinnie Jones says Coleen Rooney and Rebekah Vardy are an 'EMBARRASSMENT' to their husbands
HENRY DEEDES on Brexit's latest stumbling block