The mayor of Paris has unveiled plans to surround the Eiffel Tower with a huge garden that would see cars and roads banished from around the monument.

The £65million project will see a mile of green space created, stretching from Place Joffre at one end to the Place du Trocadero at the other.

Several roads which currently traverse the area will be replaced with tree-lined avenues, while the Pont d’Iéna – which spans the Seine – will be pedestrianised.

Mayor Anne Hidalgo revealed the design on Tuesday as she announced American architect Kathryn Gustafson won the bid to redesign the area. 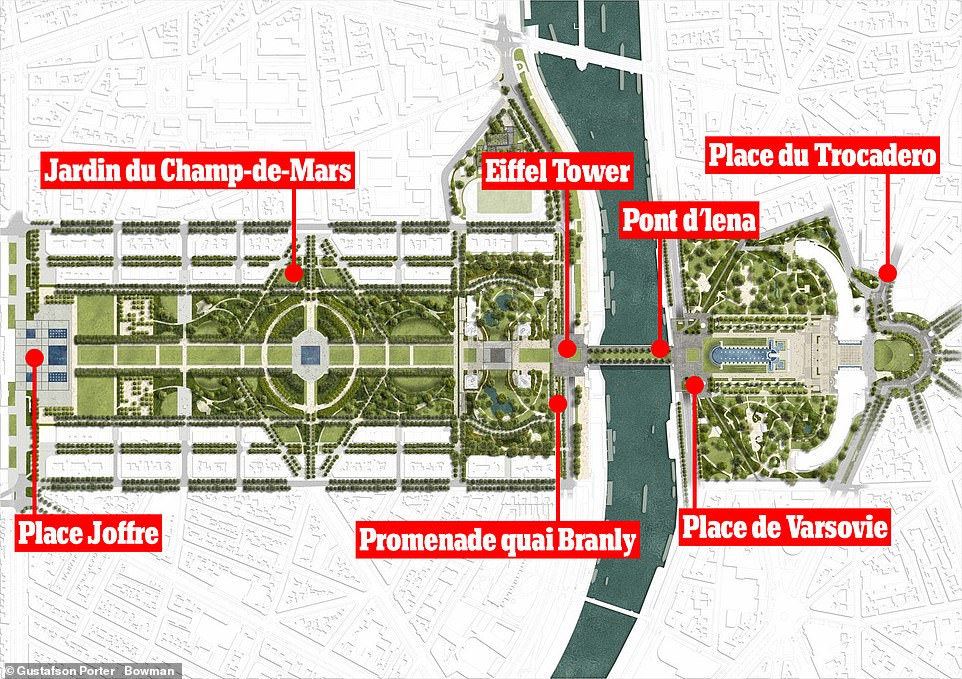 Anne Hidalgo, mayor of Paris, has unveiled plans that will see 133 acres around the Eiffel Tower turned into a massive public park, stretching from Place Joffre at one end to the Place du Trocadero at the other 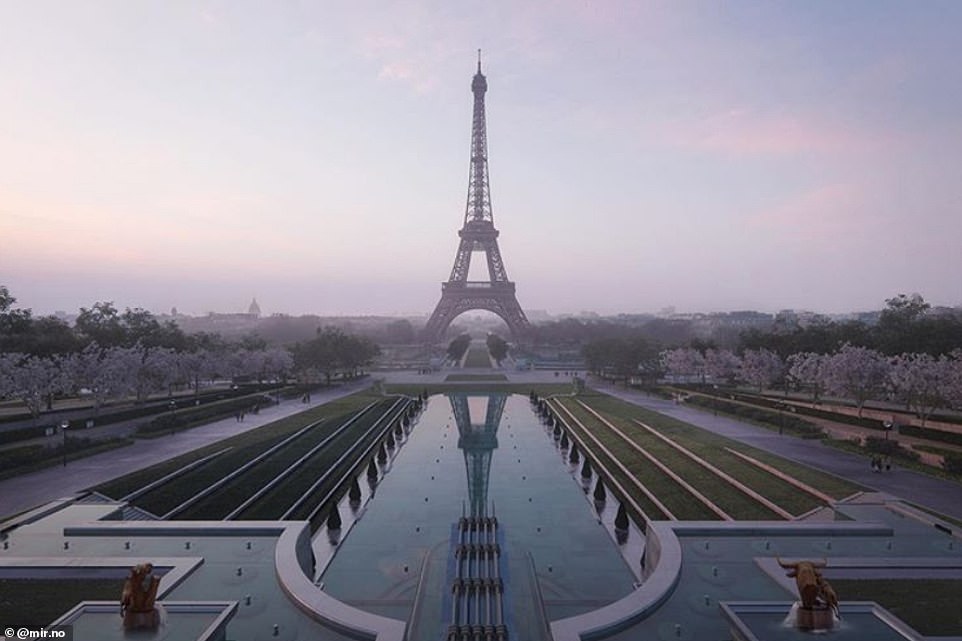 The plans will see the Trocadéro Gardens remodelled to include huge bleachers to either side of the fountains (pictured left and right), providing seating space for thousands of guests 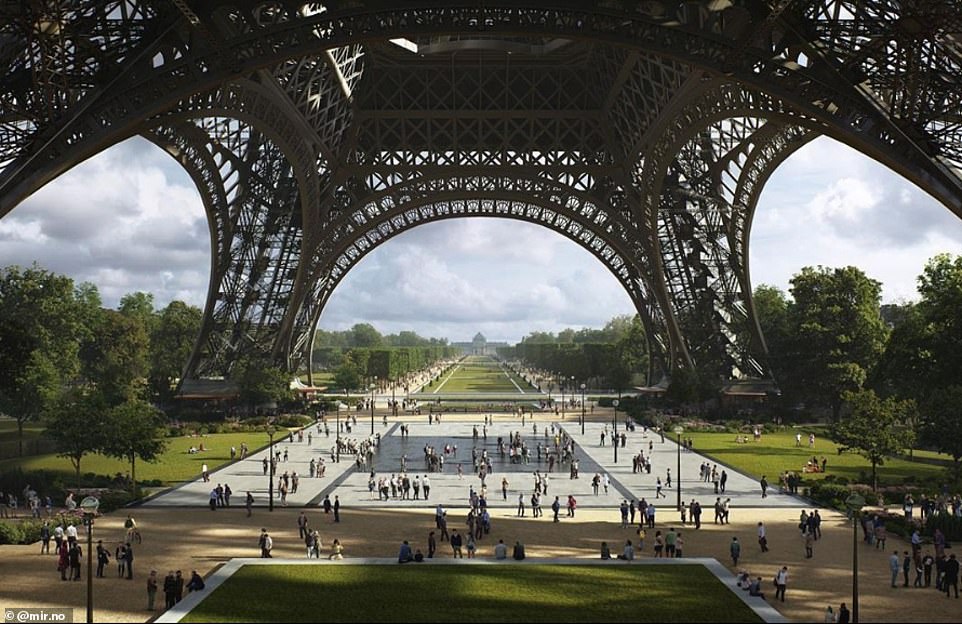 The £65million scheme, due for completion before the Paris Olympics in 2024, will see the Eiffel Tower gardens renovated to provide more public space along with kiosks and shops concealed within the trees

Speaking about her plans, Gustafson – who studied in France – said: ‘We can create the biggest garden in Paris… with much more biodiversity, much more ecology.’

Gustafson and her practice, which is British – Gustafson, Porter + Bowman – have designed several parks and squares in France, but are best known internationally for the memorial fountain for Britain’s Princess Diana in Hyde Park, London.

A total of 54 hectares (133 acres), currently crisscrossed by several roads including two major thoroughfares on each side of the Seine river, will be largely turned over to pedestrians and ‘low-impact transportation’ such as bus and bike lanes.

In particular, the heavily used car lanes on the Iena bridge which spans the Right and Left Banks underneath the Eiffel Tower will also be given over to lawns and rows of trees, according to a video rendering of the project.

‘We’re going to have an extraordinary garden where we’ll hear birds singing once again,’ Hidalgo said.

That will be music to the ears of the estimated 150,000 people who visit the site every day during the summer high season, including the 20,000 to 30,000 who climb the tower itself. 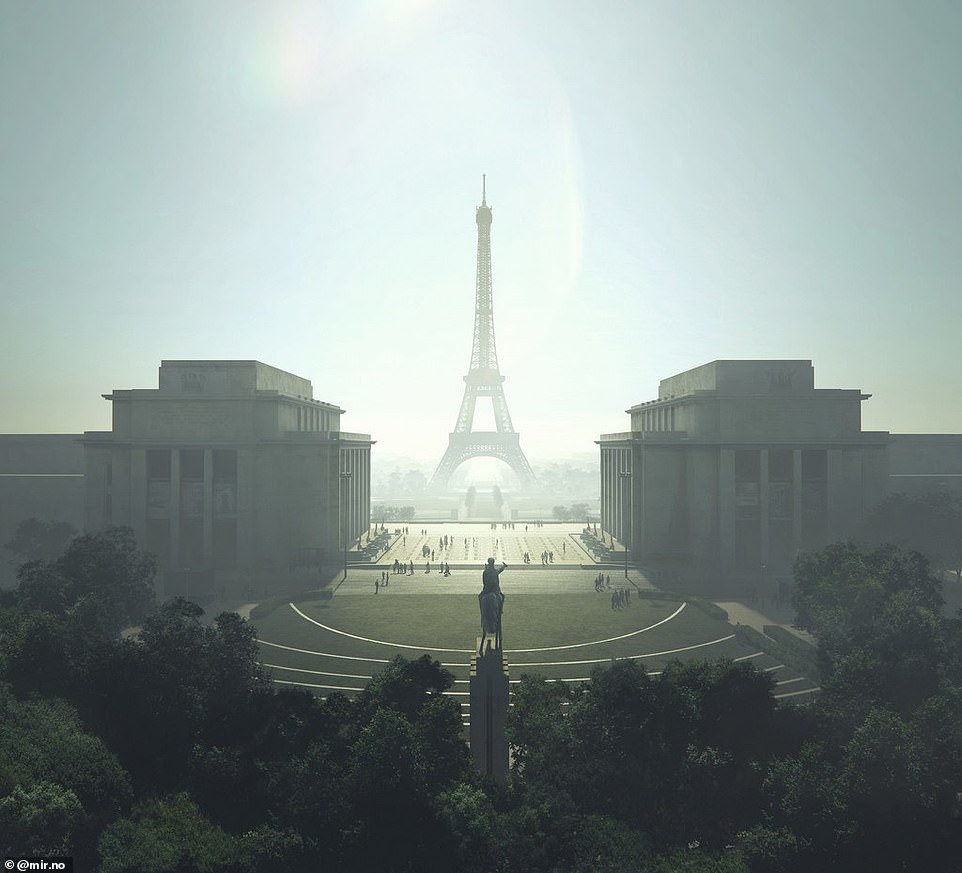 At the Trocadero end there will be a public amphitheatre created, providing thousands of seats with views over the Eiffel Tower while trees will be planted to shield the roads 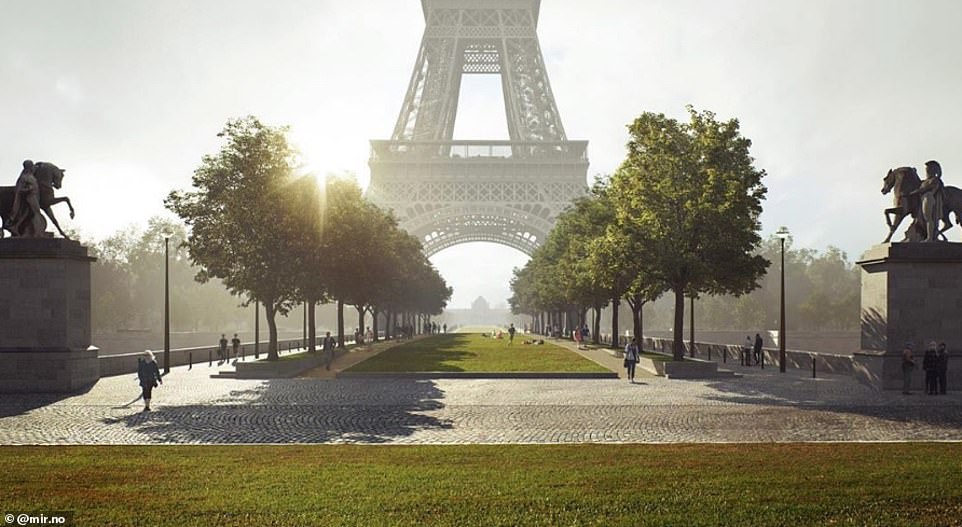 The Pont d’lena bridge will be completely pedestrianised and covered with grass, except a small avenue either side for bicycles and emergency vehicles to pass through 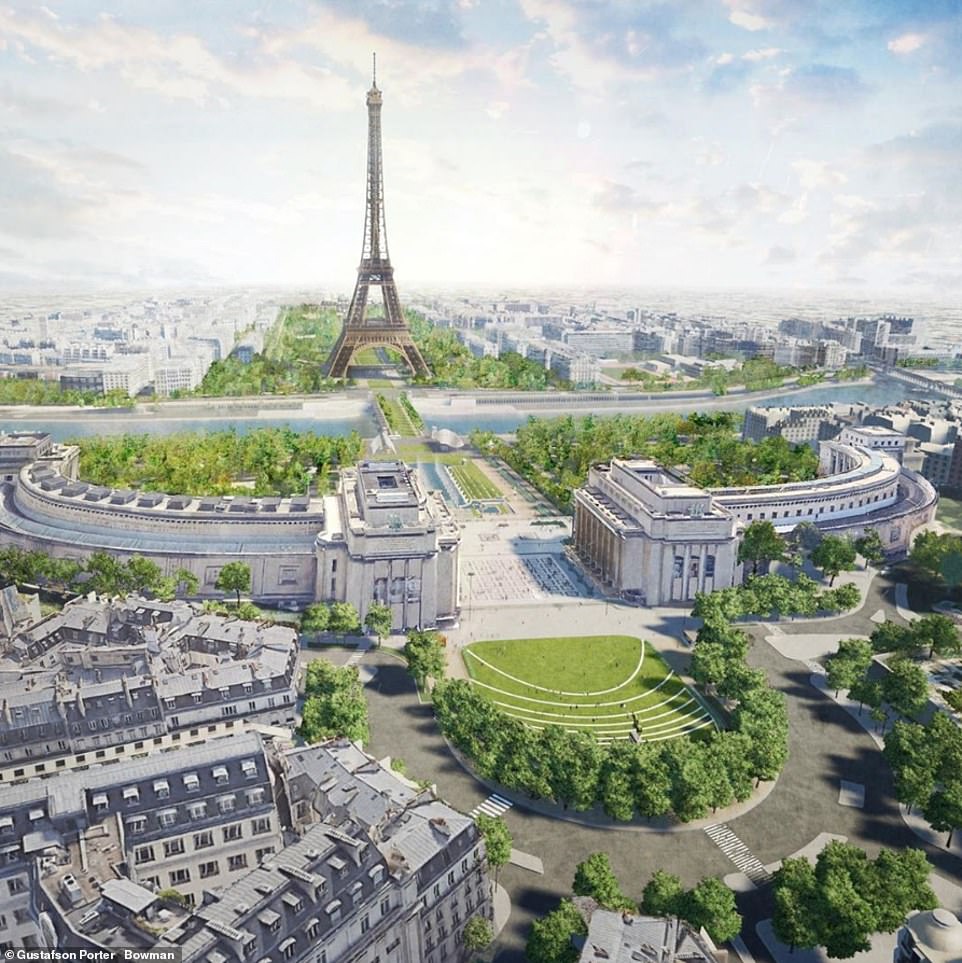 American architect Kathryn Gustafson, whose British firm designed London’s Princess Diana memorial, is the brains behind the project, which she said would be the biggest garden in Paris

The expansive garden will stretch from the Ecole Militaire, a military academy dating from the 18th century, to the modernist Trocadero esplanade and its Chaillot Palace, built for the 1937 International Expo.

The Trocadero itself will be the site of a green amphitheatre providing thousands of seats which overlook the Eiffel Tower.

Meanwhile the tower gardens themselves will be renovated, with kiosks, shops and luggage drop-off points discreetly hidden among trees.

At either end of the Pont d’Iéna will be two squares – one to host public events and another to aid the flow of pedestrians.

The project also calls for an overhaul of the vast lawns on the Champ de Mars, the site of dozens of major public events each year, such as concerts or mass viewings of sporting events like the World Cup.

The bulk of the work is scheduled to be finished before the start of the 2024 Summer Olympic Games in Paris.

‘The Tower will find itself at the centre of a vast park that will make Parisians want to come and visit,’ said Jean-Louis Missika, the city’s deputy mayor.

At the moment there are ‘too many cars, too much mass tourism, too many coaches,’ he said.