President  says he had nothing to do with a DOJ pronouncement that former White House Counsel Don McGahn does not have to testify before Congress about claims he made about the president’s conduct that appeared in the special counsel report.

Trump claimed that DOJ issued the opinion, that the White House backed up, to protect future presidents.

The Department of Justice advised the White House on Monday that Trump had the power to assert ‘immunity’ to protect top advisers from delivering compelled testimony to Congress.

White House attorney Pat Cipollone immediately told House Judiciary Chairman Jerrold Nadler that McGahn would not comply with a subpoena for testimony at a May 21 hearing to be held at 10:00 am on Tuesday. 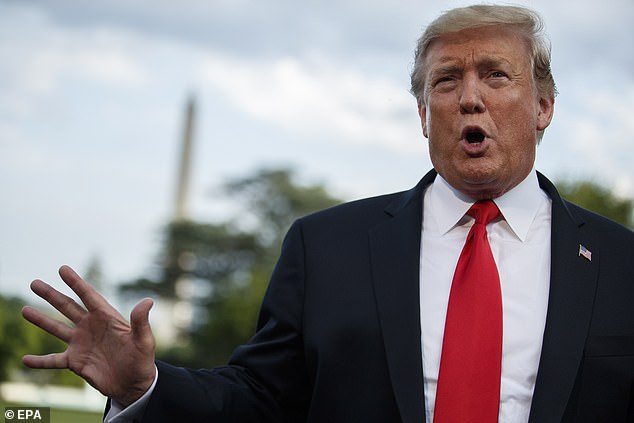 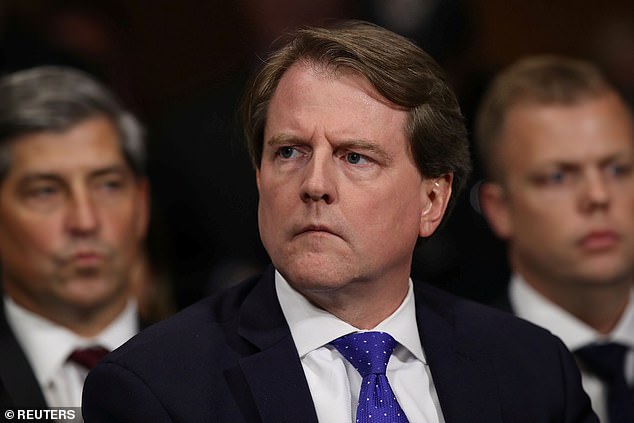 Trump claimed that DOJ issued the opinion, which the White House backed up, to protect future presidents.

The DOJ relied on  to make the judgement.

It applied a 2014 opinion to a new legal standard, that immunity from testifying to Congress about about official responsibilities is ‘fundamental’ to maintaining the constitutionally guaranteed separation of powers.

‘For these reasons, and consistent with nearly 50 years of executive branch precedent, we conclude that Mr. McGahn is not legally required to appear and testify before the Committee,’ a 15-page document singed by an assistant attorney general said.

Cipollone subsequently told Nadler that McGahn would not testify, scuttling a plan to question him about instances in which Democrats believe Trump obstructed justice.

‘There is no question that the position of Counsel to the President falls within the scope of the immunity,’ he said in a Monday afternoon

Nadler fired back in a statement, claiming that ‘[t]he Mueller Report documents a shocking pattern of obstruction of justice. The President acted again and again — perhaps criminally — to protect himself from federal law enforcement.’

‘Don McGahn personally witnessed the most egregious of these acts,’ Nadler said. ‘President Trump knows this. He clearly does not want the American people to hear firsthand about his alleged misconduct’

Immunity is not the same as privilege, which the president claimed to keep the full, unredacted Mueller report out of Congress’ clutches.

McGahn already refused a document production demand from Nadler. It was unclear before the immunity assertion whether he would buck the subpoena that called for testimony entirely.

The OLC memo from 2014 that Trump cites in his refusal was originally written in response to the Obama administration’s attempts to keep David Simas, political director to Obama, from having to comply with a House Oversight Committee subpoena. 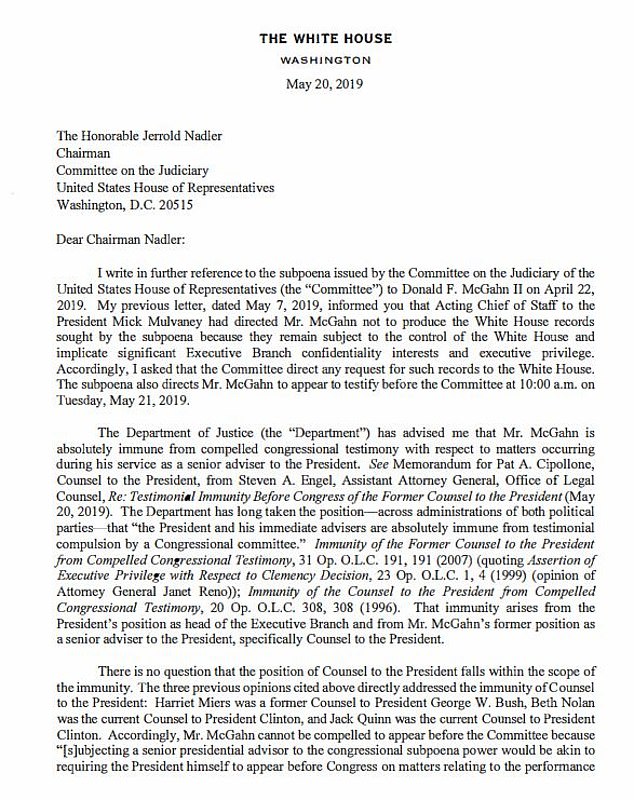 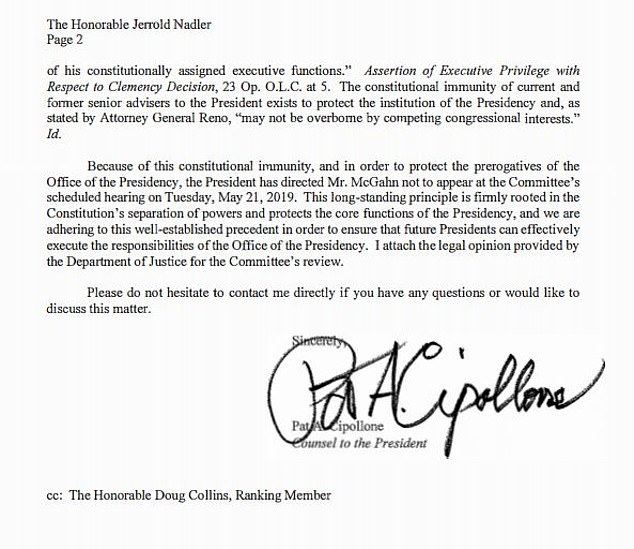 In a statement distributed to press on Monday afternoon, White House Press Secretary Sarah Sanders confirmed that Trump was extending immunity to McGahn.

She claimed the White House had been ‘completely transparent with the Special Counsel’s investigation’ already and isn’t required to give additional material to Congress.

McGahn testified to Mueller’s investigators for 30 hours, Sanders said, and the White House turned over 1.4 million documents to prosecutors.

‘The Democrats do not like the conclusion of the Mueller investigation – no collusion, no conspiracy, and no obstruction – and want a wasteful and unnecessary do-over,’ she claimed. ;The House Judiciary Committee has issued a subpoena to try and force Mr. McGahn to testify again.’

Sanders noted, ‘The Department of Justice has provided a legal opinion stating that, based on long-standing, bipartisan, and Constitutional precedent, the former Counsel to the President cannot be forced to give such testimony, and Mr. McGahn has been directed to act accordingly.’

‘This action has been taken in order to ensure that future Presidents can effectively execute the responsibilities of the Office of the Presidency,’ she argued.

A spokesperson for the Department of Justice further claimed in an email to reporters that subpoenaing McGahn was akin to demanding testimony from Trump.

‘The President’s immediate advisers are an extension of the President. Congress may no more summon the President to a congressional committee room than the President may command Members of Congress to appear at the White House,’ spokeswoman Kerri Kupec wrote.

Legislators had hoped to ask McGahn about times during his tenure in which he says he felt pressured to have Mueller fired. He claims Trump told him to call the deputy attorney general and tell him that Mueller had conflicts and could not be the special counsel.

The assertion appeared in the Mueller report in a section on obstruction of justice. Mueller did not offer a conclusion on obstruction. He left the issue to Congress or a future Department of Justice, after Trump is no longer in office.

Woman 'aged 65 gives birth to her second child in India'
LA City Hall official is the latest struck by TYPHUS in the city's raging epidemic
Dressed down Duchess sports an entirely recycled outfit as she visits Scouts in Essex
How to get the best airline seat in economy class and avoid the worst
George Conway slams Trump on Twitter AGAIN over Homeland Security Sec Kirstjen Nielsen's resignation
Airport charging stations put you at risk of 'juice jacking,' experts warn
Trump's team enjoyed lavish parties at British embassy as ambassador used residence to wine and dine
'Dozens' of paratroopers injured during training accident at Camp Shelby in Mississippi