’s leadership campaign has triggered a financial crisis at ’s party HQ – with the Tory Chairman Brandon Lewis forced to beg his local associations for emergency loans to ‘keep the lights on’.

The former Foreign Secretary’s surge in the leadership race has led to a ‘stampede’ by the party’s donors to switch money from Mrs May’s operation to Mr Johnson’s campaign, with many donors telling Tory HQ that they will only resume funding after Mrs May has left No 10.

It comes as both Chancellor and his predecessor have both privately said that they expect Mr Johnson to become the next Prime Minister. 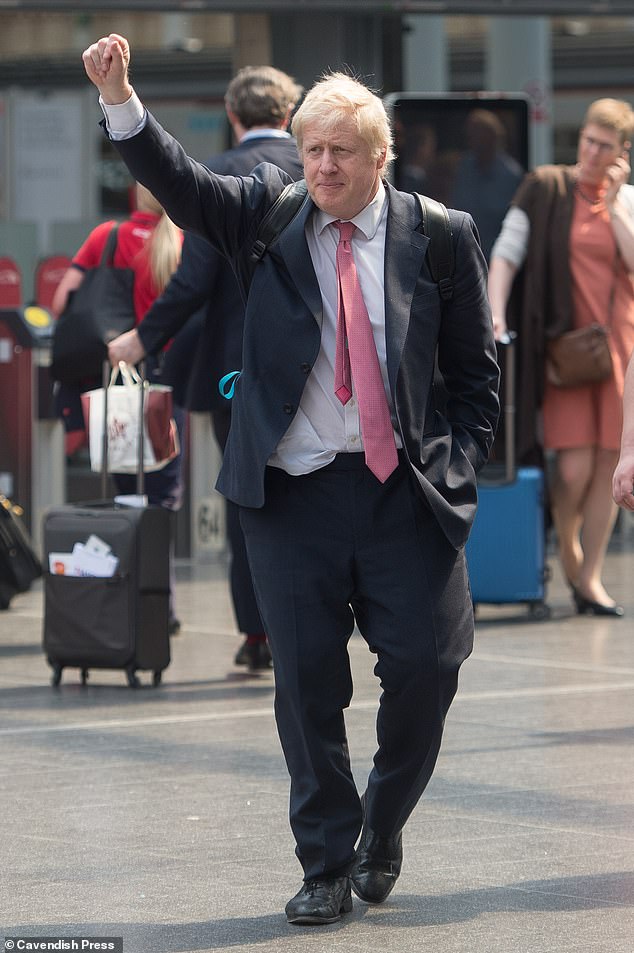 A string of recent polls have put Mr Johnson well clear of his rivals among Tory Party members, whose votes will decide the contest: his hopes of leading the party have also been boosted by a bombshell ‘megapoll and focus grouping’ effort paid for by donors that shows Jeremy Hunt and Michael Gove would lead the Conservative Party to an electoral wipe-out.

The survey, which has been circulated to a close band of senior party figures, warns that electing either of them would turn the next Election into a ‘row about public spending’ because of their previous roles at Health and Education.

Tory chairman Mr Lewis ordered his officials last month to contact wealthy local party associations to ask them to loan money to Tory HQ, which would then be paid back over five years at ‘high-street rates of interest’. 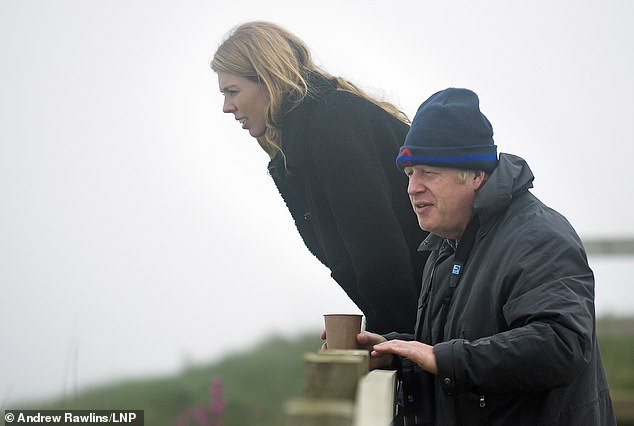 It is also understood that the party’s CEO, Sir Mick Davis, has been asked to inject more of his own money, amid fears that the party could soon struggle to pay the staff salaries.

Sir Mick, a mining tycoon, donated £250,000 to the party in March last year and the same sum again in July, September and December. That came on top of the £1.2 million he donated to the party in 2017.

A party source said: ‘If we don’t get a serious injection of money soon we will be in trouble. 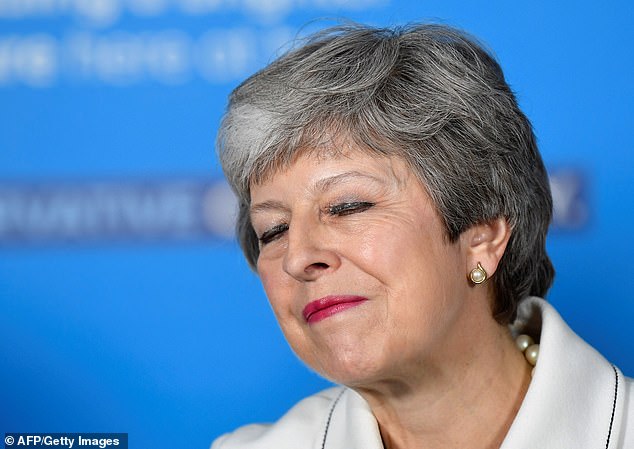 Not only is it demoralising – it also means we can’t fund the work we need to do to prepare for a General Election.’

Meanwhile, in a further boost for Mr Johnson, former PM Sir John Major will tomorrow lead a major Tory charge on climate change, joining the One Nation group of party moderates to demand that climate change is given the same level of concern as counter terrorism.

A source said: ‘Boris will have no problem in jumping on all that, and it should give some moderates the fig leaf they need to climb down in their opposition to him’.

The boost to Mr Johnson’s poll ratings – which started after Mrs May failed to deliver Brexit – has rattled his rivals, who include former Brexit Secretary Dominic Raab and Foreign Secretary Jeremy Hunt.

One Minister backing Mr Johnson told The Mail on Sunday: ‘We only have one candidate that can make Nigel Farage look like a pound-shop, snake-oil salesman and as the referendum showed, that is Boris whether you agree with him or not.’

The Minister branded critics of Mr Johnson a ‘cadre of entitled p***** who think they are born to rule’ but ‘were the ones that got us into this mess in the first place’. 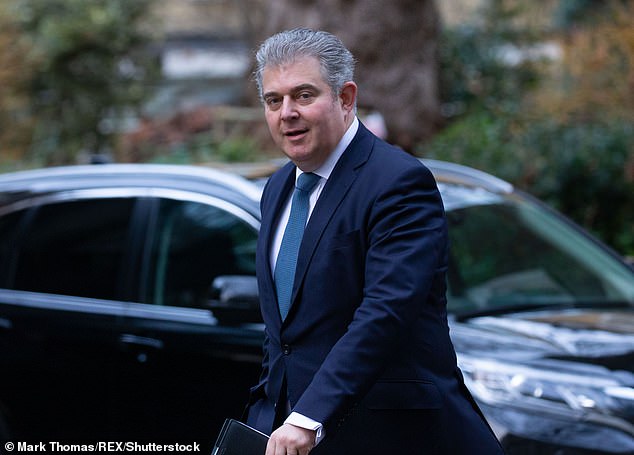 But another senior Tory MP warned that Mr Johnson could yet crash to earth given his previous history of gaffes.

They said: ‘Never underestimate the f***-up factor with Boris, so even if he is going to win we need a credible alternative.’

And a Cabinet source said: ‘The dilemma now for moderate voices around the table is accept what the tea leaves say and get on board now, or have to go begging to him when the soft, fluffy candidates inevitably crash out.’

Yesterday, former Attorney General Dominic Grieve said: ‘If the party wishes to elect Boris Johnson then he may win, but that’s not to say he’s going to make a good Prime Minister.’

A Tory source who has seen the megapoll said of Mr Johnson’s rivals: ‘It’s not that they are doing badly, it’s the fact they have zero support in the wider public.’ 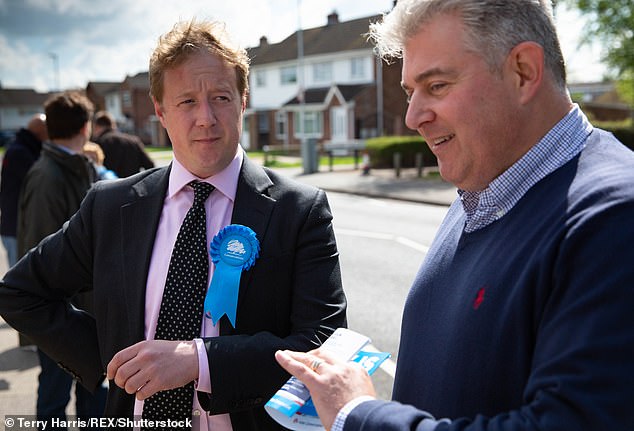 They added: ‘It’s all very well getting MPs numbers and a bit of support in the party, but neither of them are going to survive contact with reality in the wider country.

They are both toxic and it becomes a public-sector Election and the Tories will not win on that ground.

Look at what they did to Theresa last year on police funding. Now times that by a billion and that’s where Gove is with the teachers, and slightly unfairly Jeremy is with the NHS.’

But allies of Mr Gove hit back to claim he is garnering support across the Conservative Party from bother Leavers and Remainers.

On Tuesday night he hosted 50 MPs for dinner at a pub in Chelsea, and pitched his unity vision over burgers and fish and chips.

Mr Gove did not explicitly say he was running but set a vision of ‘protecting the union and trashing Corbyn every week, while also renewing the party intellectually whilst in government’.

An MP in attendance told The Mail on Sunday: ‘It went down very well, there was a good mix as well. For someone not officially declared, he had a hell of a lot of support.’

Mr Johnson has received £80,250, thanks to donations from JCB chairman Lord Bamford and hedge-fund manager Johan Christofferson, but promises of more money for Mr Johnson are said to have ‘flooded in’ in recent days. 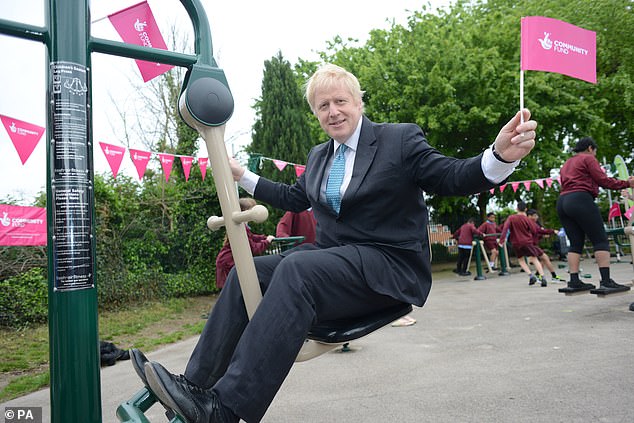 The boost to Mr Johnson’s poll ratings – which started after Mrs May failed to deliver Brexit – has rattled his rivals, who include former Brexit Secretary Dominic Raab and Foreign Secretary Jeremy Hunt

Mr Raab’s war chest includes a hefty £44,258 to pay for a member of staff in his Westminster office from the Arbuthnot Banking Group whose chairman Sir Henry Angest is a former Tory treasurer.

Mr Raab has also received £10,000 from Lord Harris of Peckham, an early backer of David Cameron when he was running to be party leader in 2005.

According to the MPs’ Register of Interests, other potential leadership rivals such as Amber Rudd and Gove have pulled in much lower sums since January – £15,750 and £14,000 respectively.

But Tory MPs point that as serving Cabinet Ministers, they are more restricted in building up war chests.

The same will apply to Hunt and Sajid Javid who do not declare any donations since January.

Party insiders point out that both men are wealthy enough to be able to fund leadership campaigns without them.

A Tory party spokeswoman said: ‘We have always taken deposits from local associations, but we have changed the basis on which we pay interest.’