There’s no denying that political differences can get in the way of a relationship.

So it was no surprise to see Married At First Sight’s Martha Kalifatidis and Michael Brunelli looking rather tense while waiting in line to vote in the federal election in Sydney on Saturday. 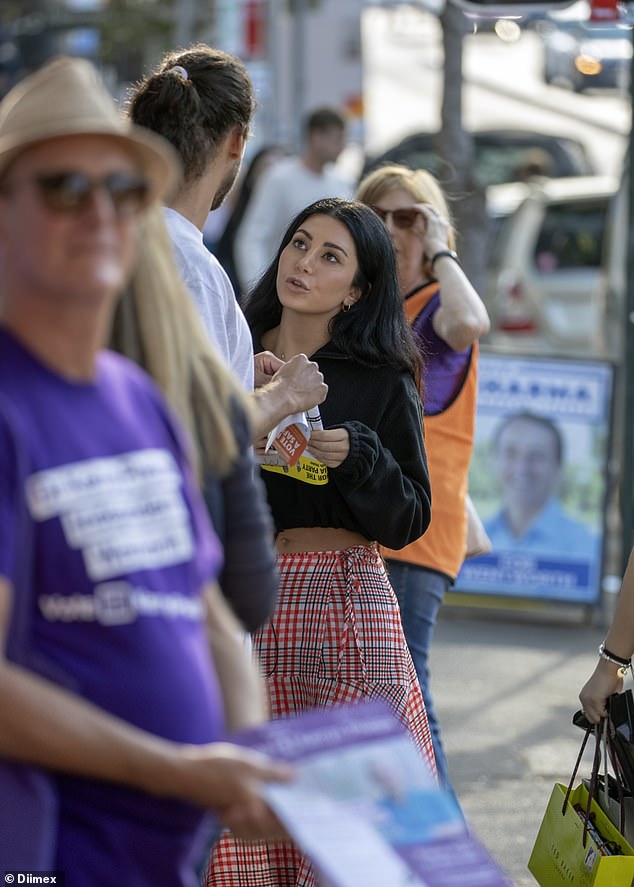 A difference of opinion? Married At First Sight’s Martha Kalifatidis and Michael Brunelli looked tense while waiting in line to vote in Sydney on Saturday

The pair appeared to have a difference of opinion, with Michael, 27, holding onto a flyer that encouraged people to ‘vote for a safer climate’.

It’s unclear if Martha was for or against the United Australia Party, but the brunette looked annoyed, with her eyes wide and bulging as she waved it around.

Michael later attempted to soothe the makeup artist by rubbing her shoulders, but she looked unimpressed, crossing her arms and pouting. 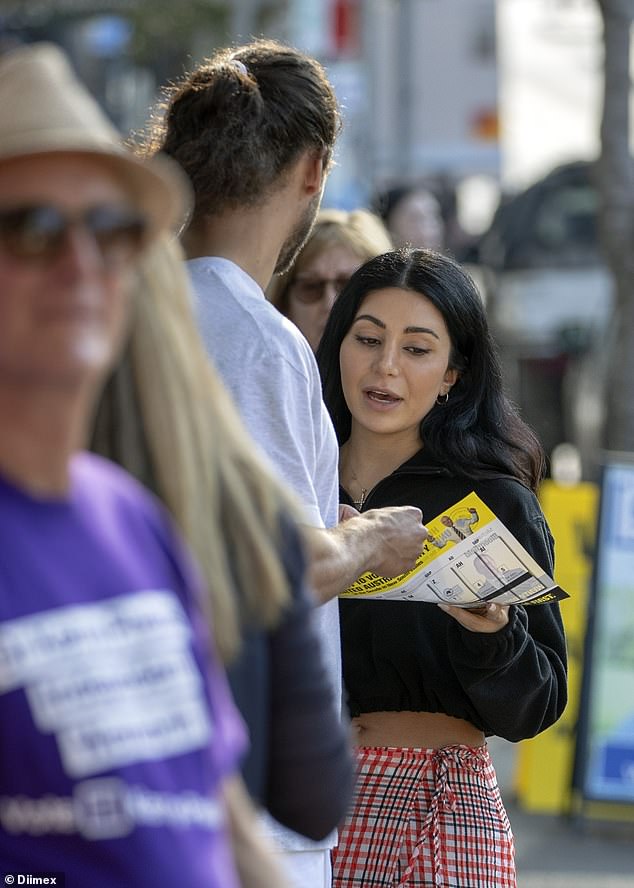 Who is she supporting? Martha, 30, looked frustrated as she clutched a yellow flyer from Clive Palmer’s United Australia Party 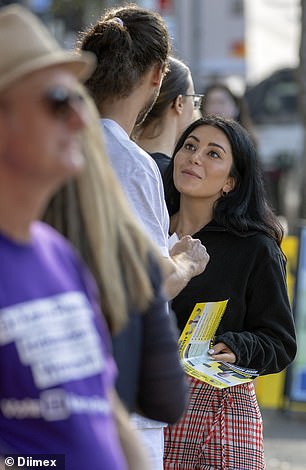 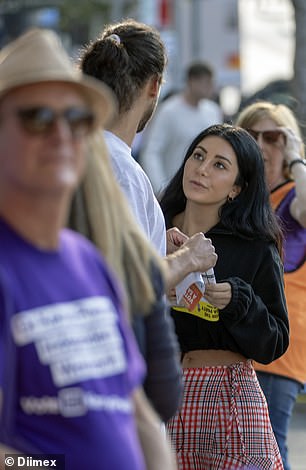 ‘I can’t believe you’d vote for them!’ The couple may have been having a disagreement over who to vote for 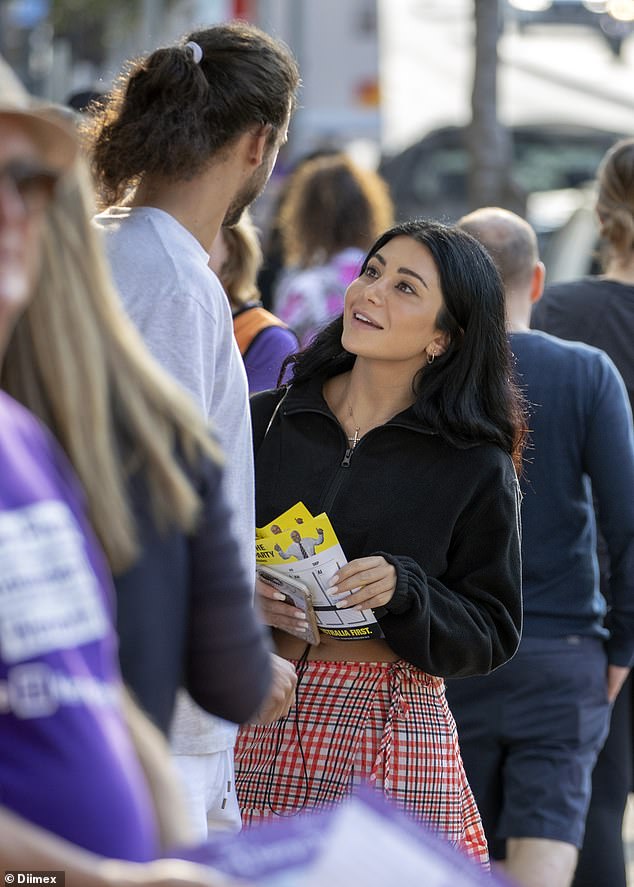 ‘You can’t be serious!’ The 30-year-old looked stunned as she clutched the Clive Palmer flyer

However, the pair appeared to be in better spirits after casting their votes.

They held hands as they crossed a road, before sitting in a local cafe for a friendly conversation.

Martha recently admitted that she and Michael had been fighting recently in a video shared to her official YouTube channel. 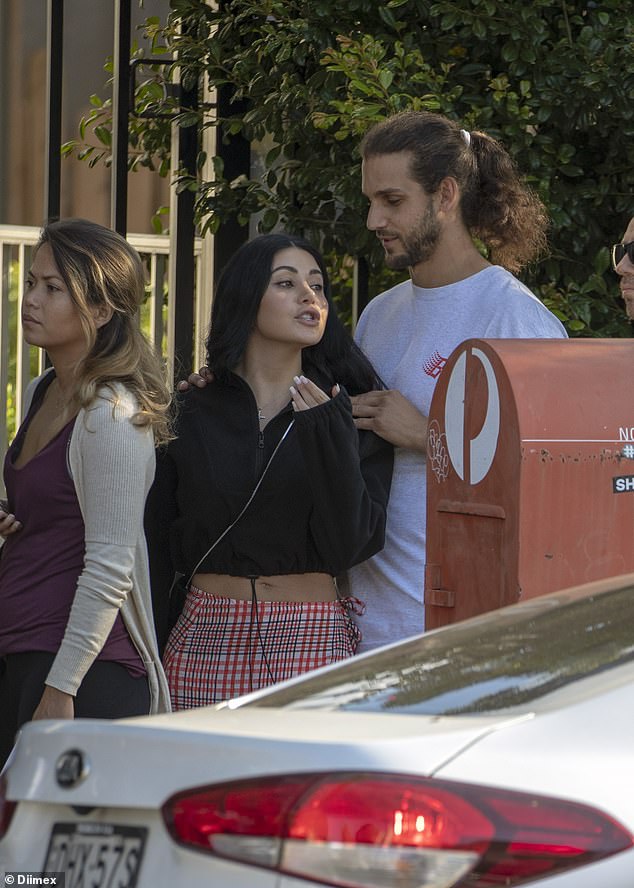 Not happy! Martha appeared to snap at Michael while they waited in line to cast their votes 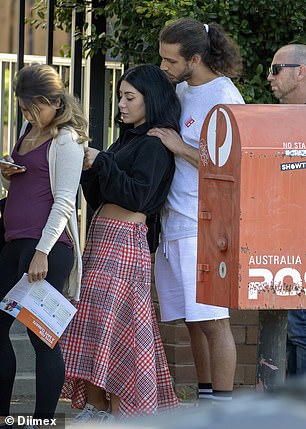 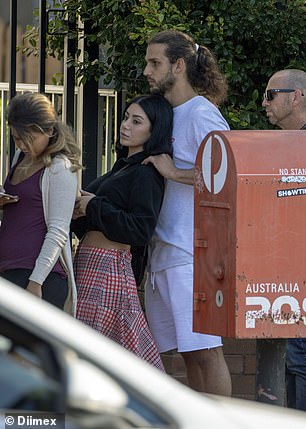 Sulking? The 30-year-old ignored a forlorn Michael, who desperately massaged her shoulders from behind 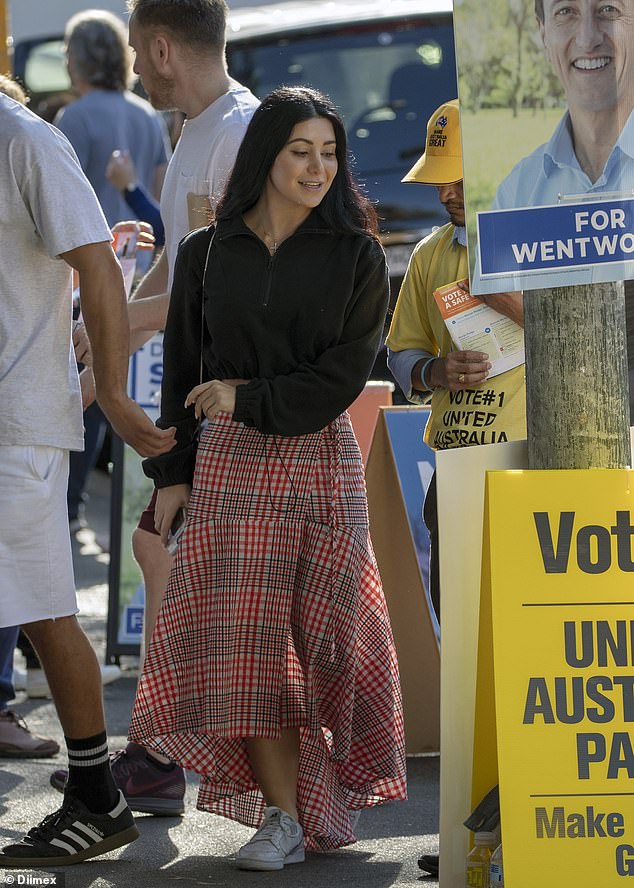 That’s more like it! The brunette beauty flashed a smile when she arrived to the polling area and saw a Clive Palmer sign

‘I’m exhausted from fighting,’ she said, after boyfriend Michael made a surprise appearance during the YouTube Q&A.

Michael then asked his girlfriend to let him know when she was finished filming, to which she replied: ‘We’re fighting! I’m exhausted from fighting.’

She added: ‘I leave for Sydney tomorrow at 5am. I’m done now. We have to fight for 10 days straight. I’m not ready to just do forgiveness.’ 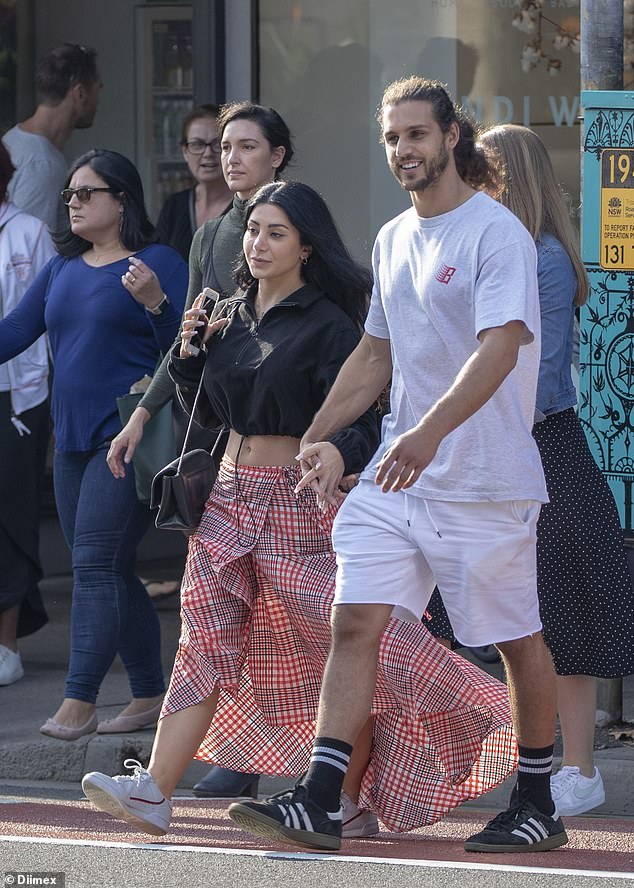 A united front: After their disagreement, the pair were spotted holding hands as they left the polling area 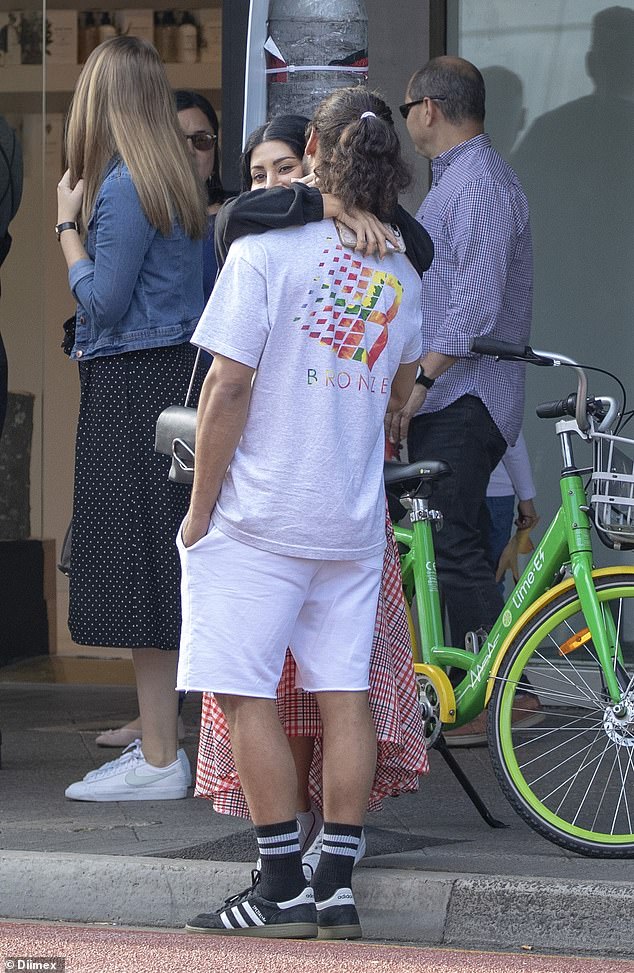 Back in her good books? Martha hugged Michael, indicating that their short-lived fight was well and truly over 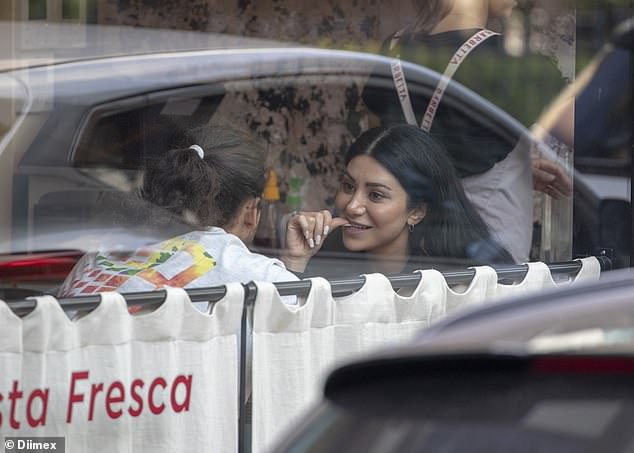 Smiling: The makeup artist looked happy and content as she sat in a cafe with Michael

Before leaving the room, Michael said he would like to speak with Martha privately before she leaves Melbourne.

‘No you won’t, babe! I’m banning your number from Optus. Don’t kiss me goodbye,’ she snapped.

Martha and Michael are one of just two couples still together after MAFS season six wrapped in December last year.

The other couple are Jules Robinson and Cameron Merchant, who got engaged during their final vows ceremony. 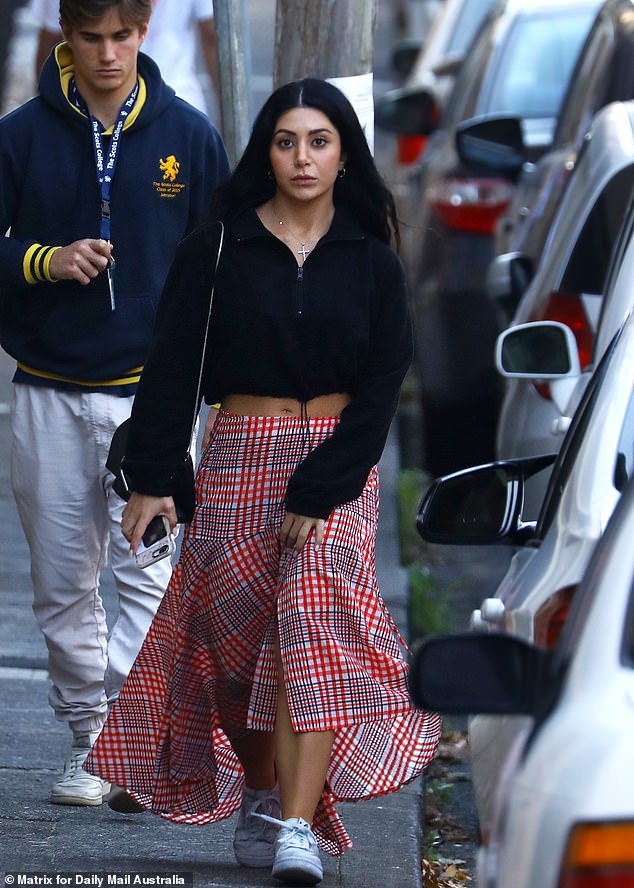 Still mad? Martha cut a menacing figure as she marched down the footpath 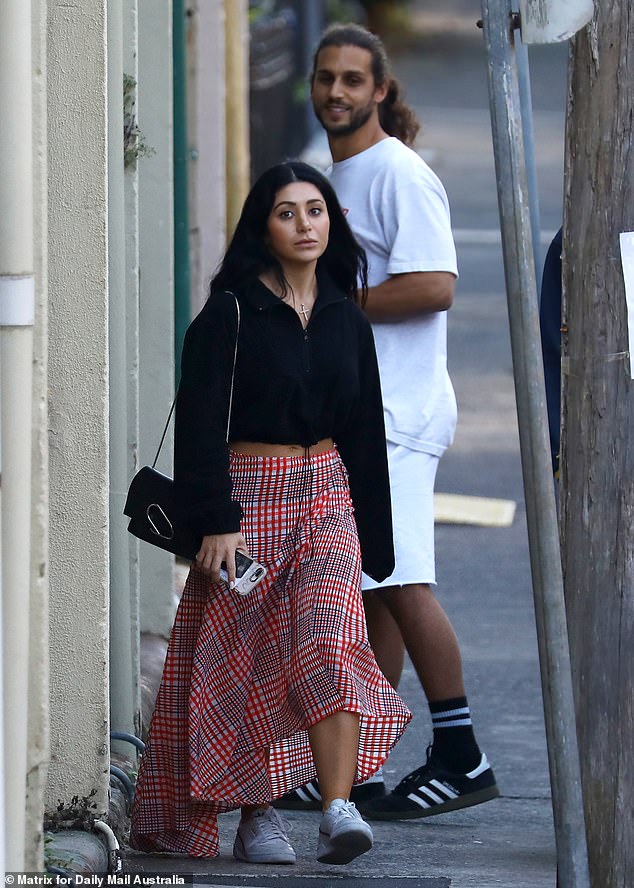 What about me? Looking annoyed, the makeup artist walked away from a smiling Michael 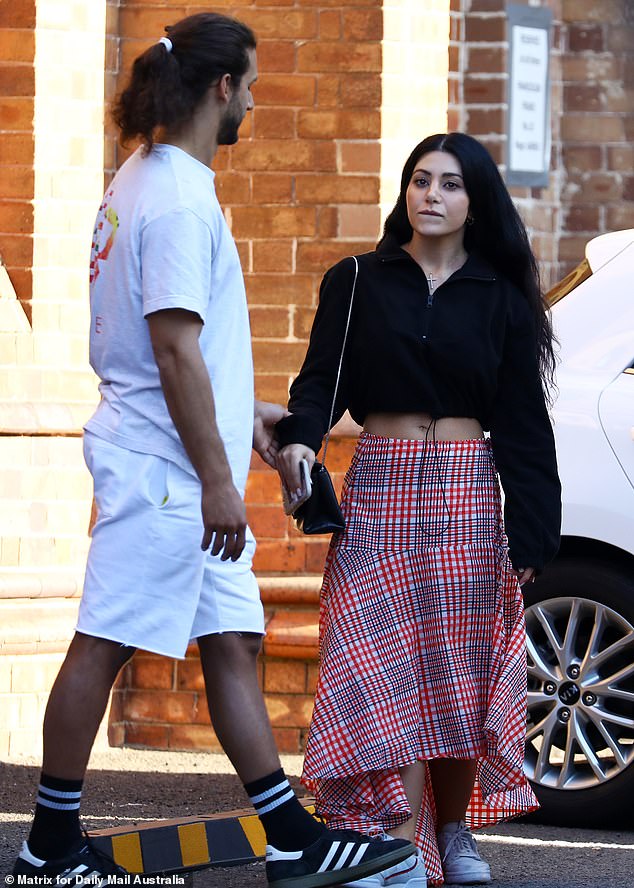 Is everything okay? Martha didn’t look happy as Michael reached for her hand

Cardi B sticks out her tongue as she learns she's got FIVE Grammy nominations as she leaves court
Peter Andre describes what Christmas Day is like with Princess and Junior.
Casey Batchelor wows in blue bandage dress with sizzling cut-out detail on night out
BRITs 2019: Pink makes debut ahead of Outstanding Contribution prize
Isle of Wight festival boss hits out at Jess Glynne's 'shocking' no-show
The Bachelor: Comedian's bizarre theory Matt Agnew has 'fake sweat'
Maura Higgins 'left the NTAs alone in TEARS after row with boyfriend Curtis Pritchard'
Coronation Street's Maureen Lipman, 74, worried her return would 'annoy' people