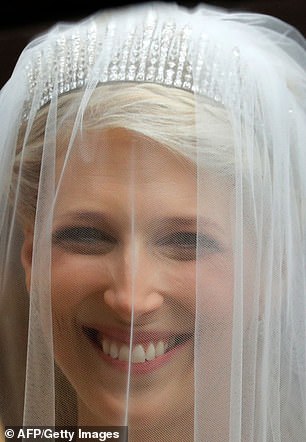 Lady Gabriella’s tiara shimmers beneath her veil as she arrives at St George’s Chapel, Windsor Castle

Lady Gabriella Windsor wore a Russian Fringe-style diamond tiara worn by her grandmother and mother on their wedding days as she married Thomas Kingston.

The stunning gems of the tiara shimmered beneath Lady Gabriella’s long white veil as she beamed on arrival at St George’s Chapel, Windsor Castle.

Lady Gabriella’s tiara was accompanied by a lace gown by Italian designer Luisa Beccaria, who designed the six-metre long veil which flowed over the band.

Her blonde hair was styled in elegant curls and her gown was embroidered with flowers and embellishments – layers of blush-coloured tulle and organdie created the body of the wedding gown under the lace, fanning out for a long train. 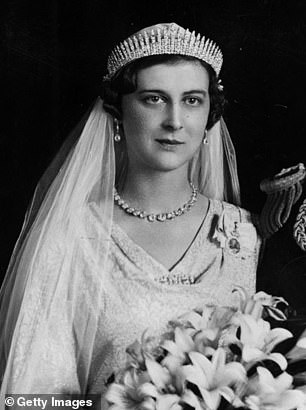 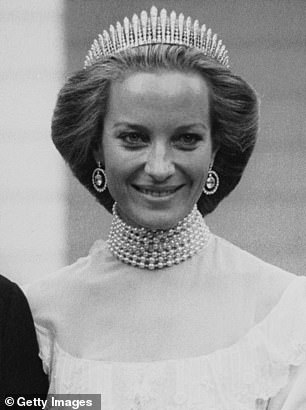 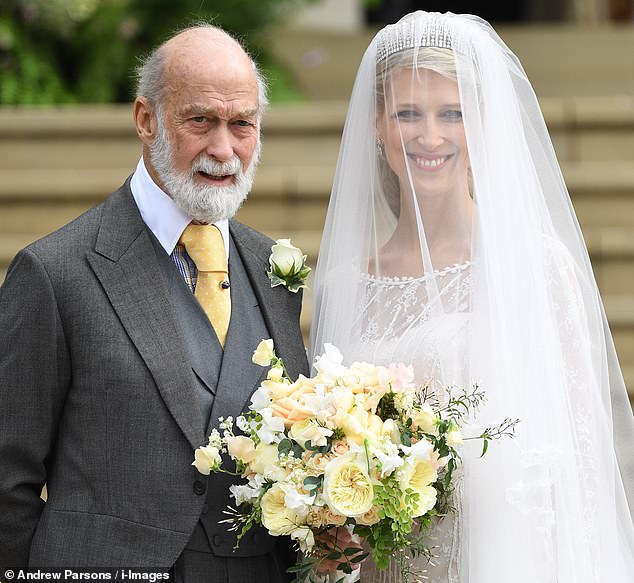 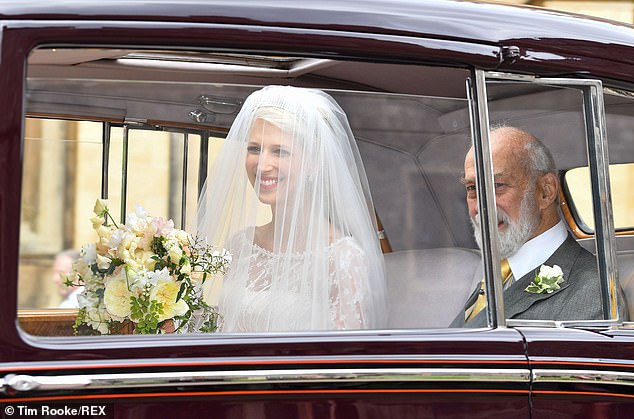 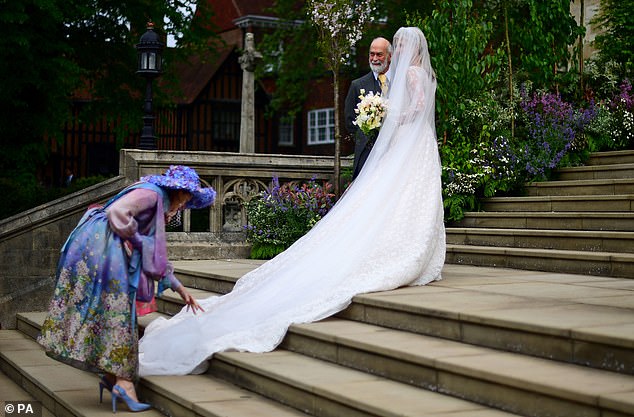 See more from the designer

Lady Gabriella Windsor and Thomas Kingston tied the knot in London this weekend, and of course we’re keen to know all the details about the most important element of the day. The dress!

The bride turned to designer Luisa Beccaria to create a custom lace gown for the big day. The dress is made using entirely Valencienne écru lace layered with ribbons of flowers and buds, finished off beautifully with a six-metre long veil. Designs for the dress began back in January of this year, so it’s been months in the making!

Forget the venue, flowers and photographer. Your dress is one of the biggest decisions you’ve got to make when planning a wedding so it’s got to be right! While you can’t shop Lady Gabriella’s exact dress, you can take inspiration from this gorgeous silhouette and snap up a similar design from our carousel (right).

From Markarian’s big money buy to Raishma’s budget-friendly offering, we’ve lined up lace wedding dresses aplenty for you to peruse.

Known as Ella, the bride had a creamy ivory Ella rose in her bouquet alongside myrtle, a tradition in many royal bridal flower arrangements.

She entered the chapel at Windsor Castle to marry financier Thomas Kingston after stepping from a claret-coloured vintage car, accompanied by her father, Prince Michael of Kent.

Isabella and Maud Windsor – Lady Gabriella’s nieces – and the other bridesmaids wore cream dresses with blush underlays and sashes, with flower rings in their hair in a similar style to the bouquet. 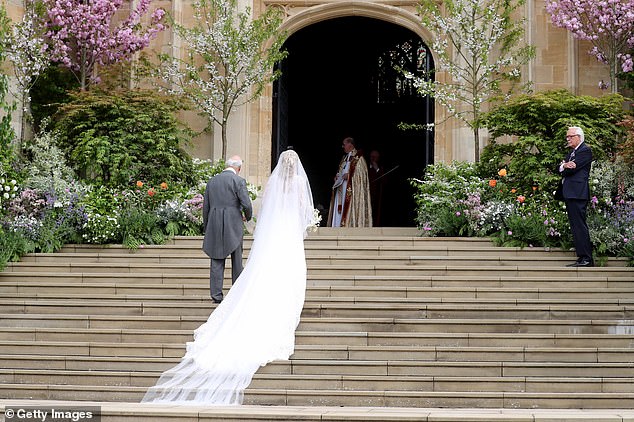 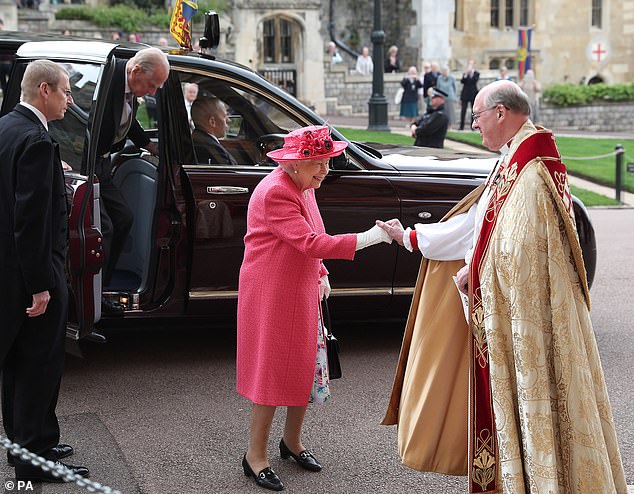 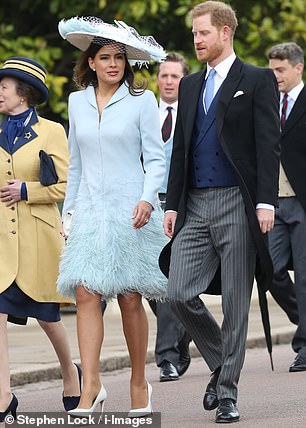 The Duke of Sussex, Sophie Winkleman and Princess Anne smile as they arrive at St George’s Chapel in Windsor today

Maud, the eldest daughter of Lord Frederik Windsor and Peep Show actress Sophie Winkleman, was part of the bridal party at Princess Eugenie and Jack Brooksbank’s wedding in October.

Pageboys wore cream shirts and knickerbockers for the midday ceremony conducted by Dean of Windsor the Right Rev David Conner.

Mr Kingston arrived at the chapel on foot with his best man, closely followed by the mother of the bride, in a lilac gown and embroidered overcoat, who was accompanied by Lady Gabriella’s brother. 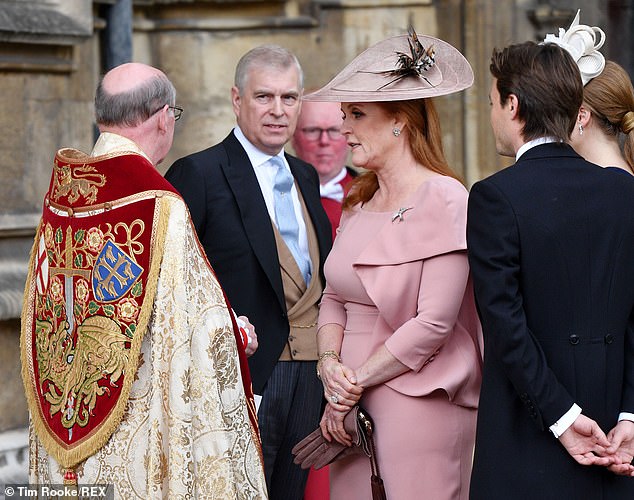 Prince Andrew and Sarah Ferguson, Duchess of York speak to Dean of Windsor the Right Rev David Conner outside the chapel 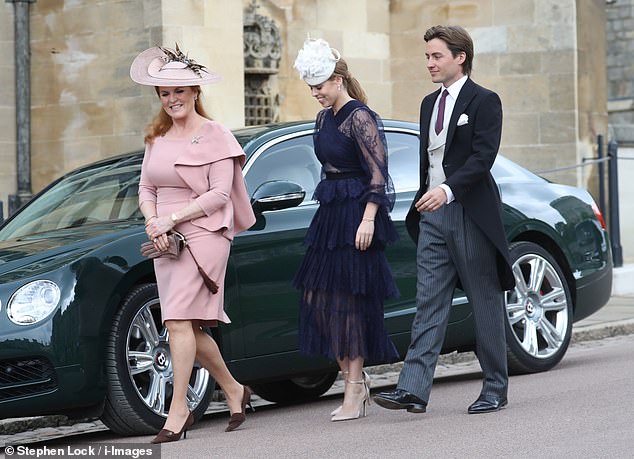 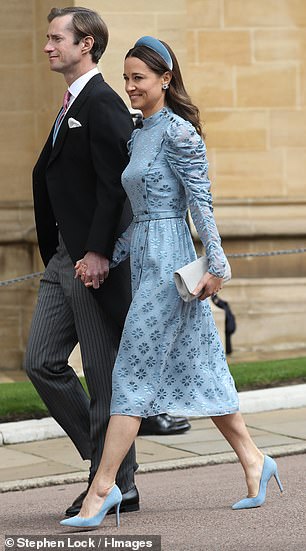 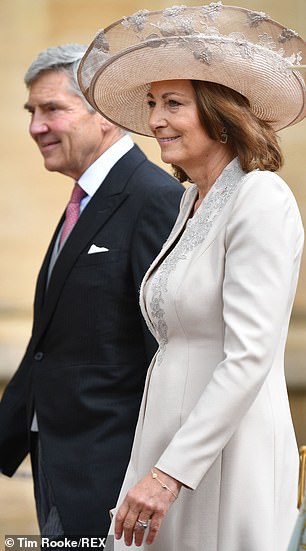 Pippa Middleton arrives with her husband James Matthews (left), along with her parents Carole and Michael Middleton (right)

The Queen led the royal family at the wedding and was joined by the Duke of Sussex, who left his baby son Archie at home to attend, and the Duke of Edinburgh, making a rare public appearance.

Pippa Middleton, sister of the Duchess of Cambridge and friend of the groom, was among the guests at the ceremony.

Lady Gabriella is the daughter of Prince Michael of Kent, a minor royal who is the Queen’s cousin. 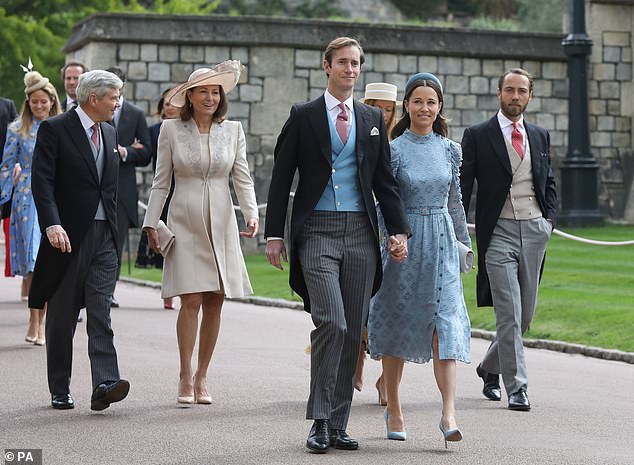 Her mother Princess Michael, has made headlines over the years for her outspoken comments, being dubbed ‘Princess Pushy’ by the press.

Her parents married in 1978 and she has one older sibling, her brother Lord Frederick, known as Freddie, who hit the headlines after admitting to using drugs at university.

The Duke of Sussex arrives at St George’s Chapel with Sophie Winkleman, who is married to Lady Gabriella Windsor’s brother Lord Frederick, alongside Princess Anne

Lord Frederick married Peep Show actress Sophie Winkleman in 2009 and the pair have two children together.

Lady Gabriella studied at both Brown University in the US and the University of Oxford, with degrees in Comparative Literature and Social Anthropology.

The 38-year-old works as an arts and travel director for brand company Branding Latin America, based in Knightsbridge, London.

It is the third royal wedding in the 15th-century venue in less than a year following the star-studded nuptials of the Duke and Duchess of Sussex last May and Princess Eugenie and Jack Brooksbank in October.

The Duke of Cambridge, president of the Football Association, did not attend the wedding due to the FA Cup final between Manchester City and Watford in the evening.

Lady Gabriella had been dating Mr Kingston for a number of years when he proposed last summer.

Mr Kingston is a director of Devonport Capital, which specialises in providing finance for companies in ‘frontier economies’ and is a close friend of Pippa Middleton.

Mother who died along with her twin children may have fallen asleep at the wheel, inquest hears
Tui customer claimed £20,000 for sickness but his Facebook snaps told a different story
Shocking moment workman is almost engulfed by a fireball when an electrical blaze explodes
The tipple that claims it’s booze free but not buzz free
Boy with severe dairy allergy dies after classmate threw cheese at him
Terrifying footage shows 130mph cyclone ripping into India
Asylum seeker, 30, with 18 convictions gets another chance to stay in UK
Asteroid that wiped out the dinosaurs impacted the Earth at 'the deadliest possible angle'