In the new film Rocketman, he plays one of the most flamboyant pop stars of all time.

So it was no surprise that Taron Egerton went a bit over the top with his show of affection when he shared the red carpet with Sir Elton John for its premiere at the last night.

The Welsh actor, 29, kissed the singer’s hand and even bent down to kiss his feet at the world premiere at the Palais des Festival. 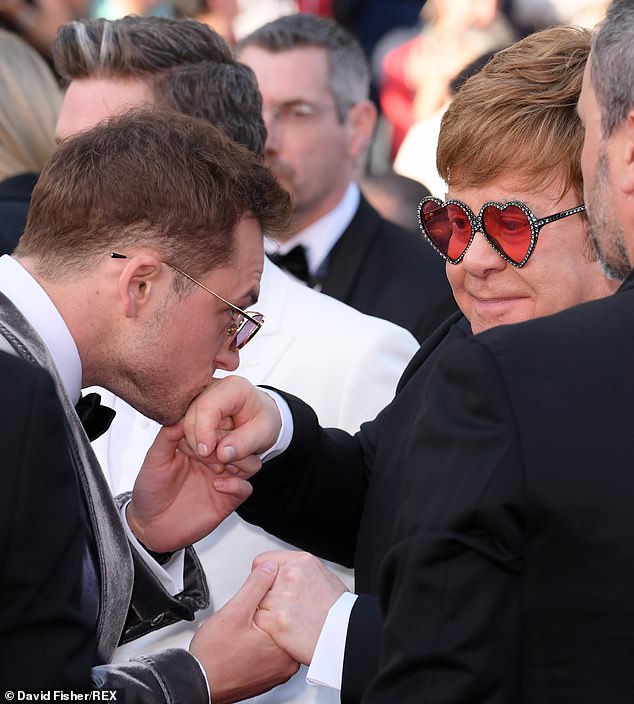 The Welsh actor, 29, kissed the singer’s hand and even bent down to kiss his feet at the world premiere at the Palais des Festival 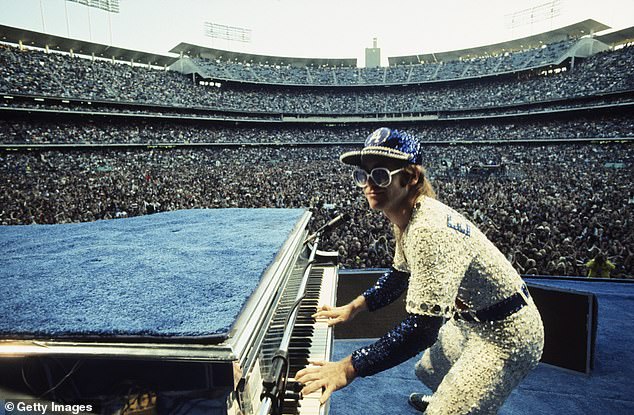 Elton John performing at Dodger Stadium in Los Angeles, 1975. He is wearing a sequinned baseball outfit 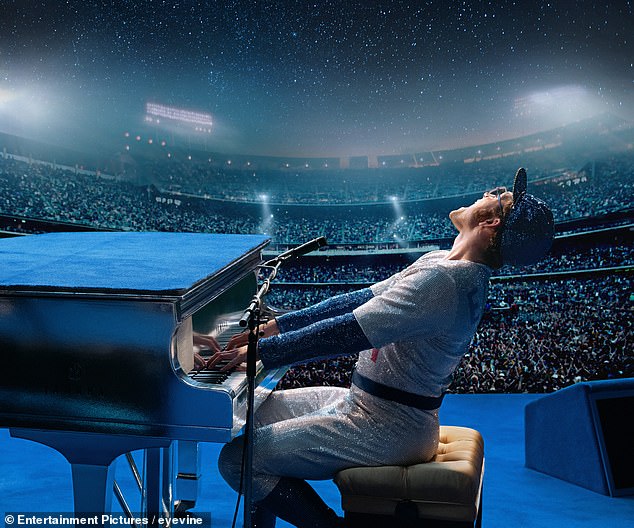 The story of Elton John’s life, from his years as a prodigy at the Royal Academy of Music through his influential and enduring musical partnership with Bernie Taupin is shown in the film. The movie’s rendition of that night at the Dodger’s stadium is shown here with Egerton

Egerton plays Sir Elton, 72, in Dexter Fletcher’s film about the star’s childhood and rise to fame.

Showing how they have bonded through working together on the biopic, the pair linked arms as they went up the steps to the auditorium, waving to the crowd of fans.

Fittingly, Sir Elton wore a jacket with a red rocket embroidered on the breast pocket and ‘Rocket Man’ emblazoned across the back. 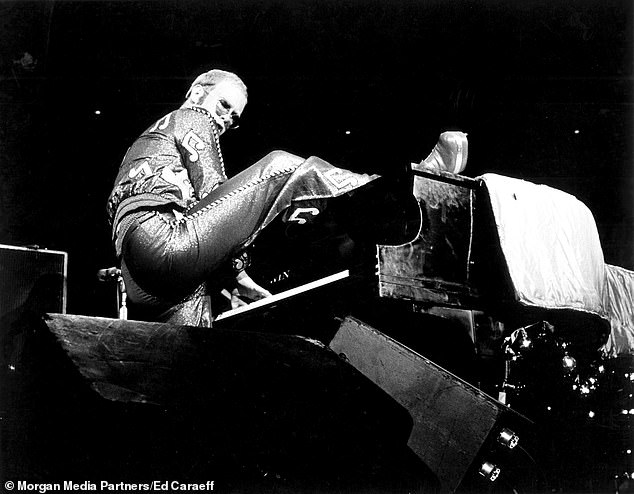 English singer and songwriter Elton John performs in a stripy costume during his US tour in Los Angeles, November 1974

Egerton plays Sir Elton, 72, in Dexter Fletcher’s film about the star’s childhood and rise to fame

Egerton wore a grey-blue crushed velvet jacket and Eltonesque round tinted sunglasses – but was outdone by the singer, who donned heart-shaped diamante red-tinted shades.

They were joined at the screening by Bodyguard star Richard Madden, who plays Sir Elton’s former lover and manager John Reid.

Earlier, Egerton and Sir Elton had put on an equally exuberant display as they laughed and joked together at the official photocall. While Egerton wore a floral suit and yellow-tinted glasses, Sir Elton opted for a pair of sparkly Gucci sunglasses and a bespoke baby blue suit with ‘Rocketman’ embroidered on the top pocket. 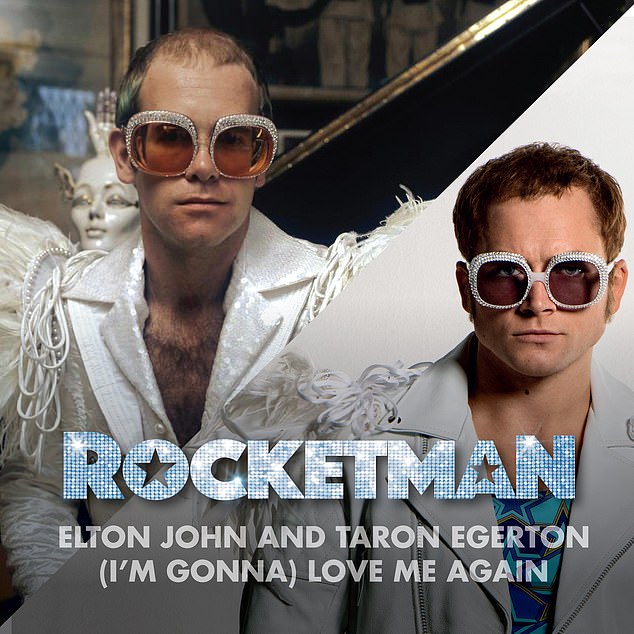 Music from the motion picture, a new song by Egerton and John, ‘(I’m Gonna) Love Me Again’

Unfortunately for the singer, he appeared to be inadvertently wearing the colours of Manchester City – whom his beloved Watford play in the FA Cup final tomorrow.

Sir Elton’s sons, Zachary, eight, and Elijah, six, will have the honour of walking the team out on the Wembley pitch alongside the singer’s husband David Furnish.

Sir Elton, Watford’s honorary life president and former chairman, is unable to attend the match as he is performing in Copenhagen as part of his marathon Farewell Yellow Brick Road tour. At the Rocketman photocall, Madden looked slightly more demure in a buttoned up tan suit and a black print shirt. 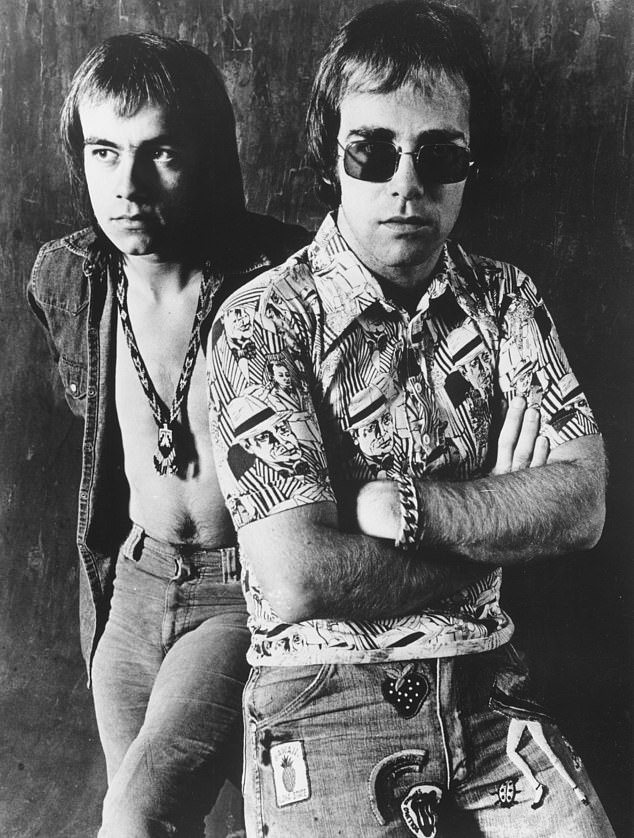 Speaking about the sex scenes in the film, Egerton recently said he and Madden had a raw, electric energy on set – Madden’s character Reid was Sir Elton’s boyfriend for five years and remained as his manager until 1998. 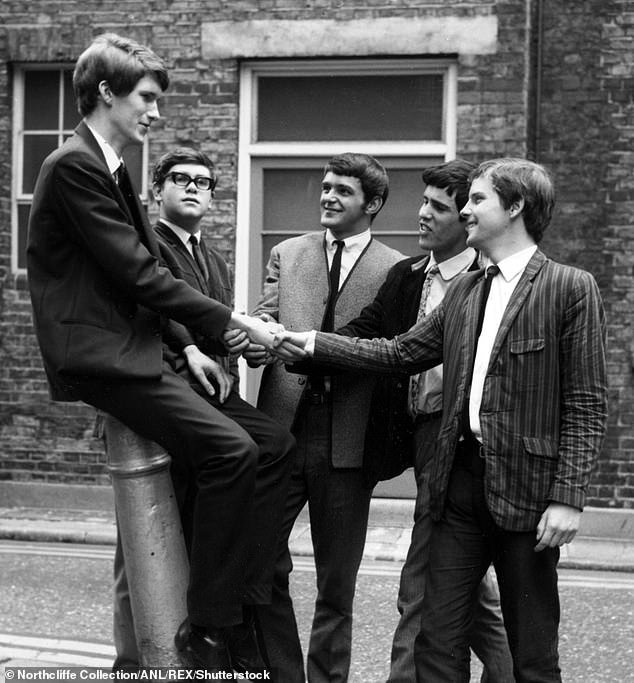 ‘I treat it with the same love, care and affection I would as if it was my first experience of falling for somebody.’

Egerton does all his own singing in the film and has released a duet with Sir Elton to promote the film.

Black Friday 2018 deals: We reveal the best bargains on offer
Mother slams Waitrose for selling gendered cakes and asks brand to 'do better'
Democrats publish resolution on next stage of impeachment investigation
'Neighbour from hell', 55, is told he'll be jailed if he plays loud music
Meet the families who splash up to £41,000 each on fridges
Mark Damazer defends decision to axe Baroness Nicholson
'Lycra lout', 55, filmed unleashing torrent of abuse at pregnant driver is revealed
John Lewis could become the new Radio Rentals by loaning out white goods and sofas