A Georgetown student whose father paid $400,000 (£312,000) to get him into the American college is suing the university for not realizing he was a fake tennis recruit with no experience.

Adam Semprevivo, who had played basketball instead, put the blame on college officials who did not catch his bogus application.

Los Angeles executive Stephen Semprevivo, his father, pleaded guilty in a Boston court to paying $400,000 to bribe Georgetown tennis coach Gordon Ernst to accept his son as a recruit on the team. 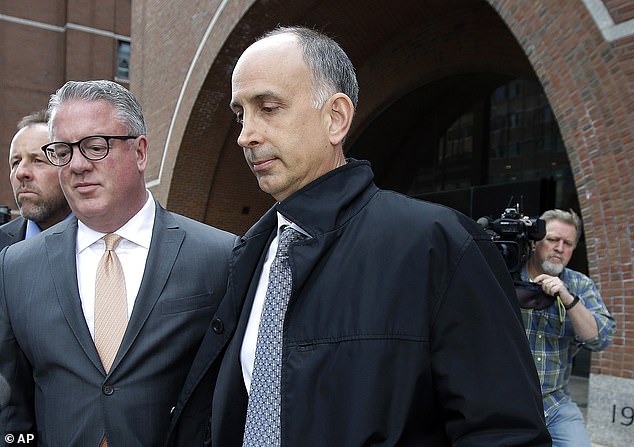 Businessman Stephen Semprevivo, pictured while leaving court in Boston, pleaded guilty to charges that he bribed a tennis coach to get his son admitted to Georgetown

The man, who was charged with mail fraud conspiracy, faces jail time.

The student said the records he provided to the school proved he had experience in basketball, but not tennis.

Stephen Semprevivo asked his son to claim he had played competitive tennis all through high school in order for him to get into the college, it is alleged.

He then claimed he was Academic All American in tennis and basketball and added he belonged to the Nike Federation All Academic Athletic Team. 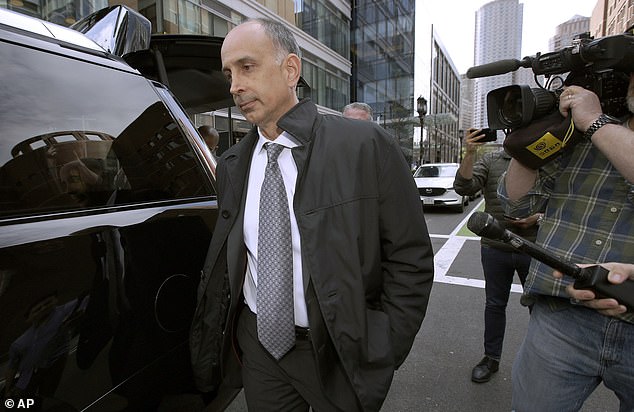 Adam Semprevivo enrolled at Georgetown in 2016, but he never joined the tennis team.

The student, who had a 3.18 grade-point average, wrote a letter in April offering to ‘resolve the matter’ if Georgetown agreed to allow him to withdraw with no black marks on his transcript and transfer his credits to a new school, the complaint said.

He decided to sue when the university sent him a letter on Tuesday saying he was prohibited from withdrawing.

He filed a lawsuit against Georgetown on Wednesday, aiming to stop the school from disciplining or potentially expelling him following his alleged involvement in the admission scandal. 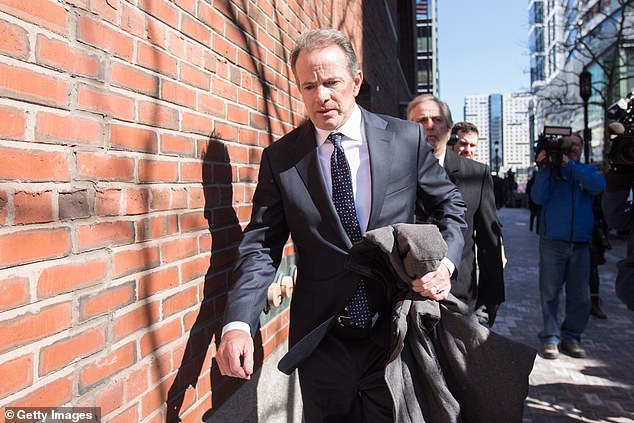 Gordon Ernst, pictured, left Georgetown in 2018 and in March he pleaded not guilty to a racketeering conspiracy charge 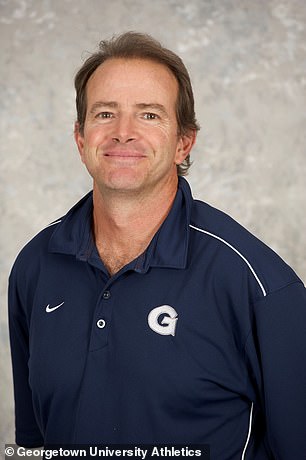 The university announced its intention to expel Semprevivo hours after his lawsuit was filed.

Georgetown University expelled two students in connection with the admissions scandal, but refused to name them.

He told  he would amend the lawsuit and seek Semprevivo’s re-admission for the fall term.

‘Failing to get him back into Georgetown, we want him to be able to leave with credits intact with no negative reference in his transcripts. We don’t want three years wasted of his life,’ Kenner said.

The student said he had no idea his father, one of the dozens parents involved in the admission scandal, had paid William ‘Rick’ Singer $400,000 to get him into the college.

‘Without the knowledge of Semprevivo, his father entered into an agreement with Singer to take specific steps for Semprevivo to be accepted to Georgetown,’ the suit reads.

Adam Semprevivo was one of at least 12 students designed as tennis recruits from 2012 to 2018 who got in as tennis coach Gordon Ernst accepted more than $2.7 million (£2.10 million) of bribes from Rick Singer, the founder of Key Worldwide Foundation and the mastermind behind the entire scandal, prosecutors said.

It is alleged that both Semprevivo and his son followed instructions from Singer during the application process.

‘When I walk into a room people will normally look up and make a comment about my height — I’m 6’5” — and ask me if I play basketball,’ the application essay read.

‘With a smile, I nod my head, but also insist that the sport I put my most energy into is tennis.’ 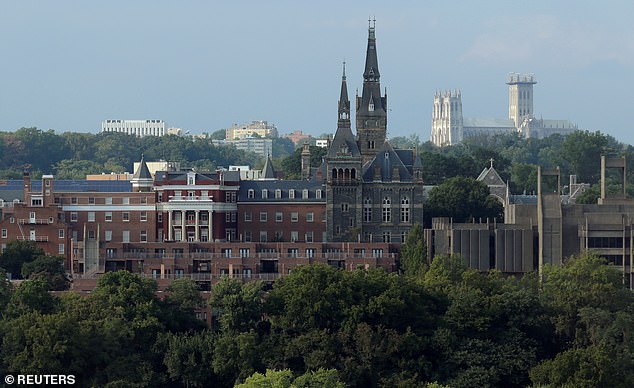 Ernst left Georgetown in 2018 and in March he pleaded not guilty to a racketeering conspiracy charge.

‘In or around 2017, Georgetown’s Office of Undergraduate Admissions became aware of irregularities in Coach Ernst’s recruitment practices . . . Coach Ernst was placed on leave in December 2017,’ the suit says.

‘Even a cursory examination of the two documents (application vs. transcript) would have made it clear they were absolutely inconsistent with one another,’ the lawsuit reads.

Meghan Dubyak, Georgetown spokeswoman, said the school was not aware of Ernst’s alleged involvement in the scam until the US Attorney’s Office contacted it this year.

Ex-girlfriend of Crimean school killer says he 'didn't want to live' after being 'bullied'
Le Grand Diversion! Paris is burning and Macron’s popularity is plunging
Iran warns the West of 'deluge of drugs, migrants and terrorism' as it lashes out at US sanctions
Lee Radziwill is laid remembered at invite-only funeral service
Edward VIII’s racism and hatred of ‘filthy, nauseating’ Australian Aboriginals is detailed
High schooler who’d never even sewn before MADE his date’s prom dress
Florida teen arrested after ditching her pit bull and laughing as it ran into oncoming traffic
De Blasio considers a curfew for NYC as National Guard are put on standby