Kidnapped teenager Jayme Closs has been spotted for the first time at a public event since she managed to escape from the Wisconsin cabin where she had been held captive for three months.

The 13-year-old, who was found alive in January after being abducted 88 days earlier, was presented with a Wisconsin Hometown Hero award at the State Capitol on Wednesday.

Jayme smiled as she was given a standing ovation by members of the Wisconsin State Assembly after being honored for her bravery and strong will. 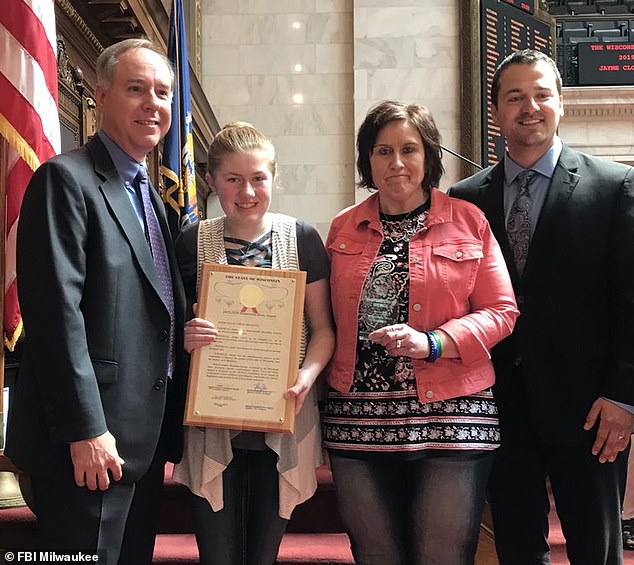 Her aunt Kelly Englehardt spoke on Jayme’s behalf as she thanked the people of her hometown for their support in the past few months.

‘She greatly appreciates the honor… and the kindness of everyone involved,’ Englehardt said.

‘Speaking for her entire family, I have to say, Jayme is totally deserving of the hero part of this award.

‘Her courage, her bravery and her spirit are things that inspire us and make us stronger and better. Just like you, we want Jayme to know how much we love her.’

A nationwide search was launched for Jayme on October 15 last year after her parents -James Closs, 56, and Denise Closs, 46 – were found shot dead in their family home in Barron.

She was found alive on January 10 about an hour away from her hometown after miraculously managing to escape the remote cabin where she was being held.