A gang of moped ‘scumbags’ exposed by BGT judge Amanda Holden for threatening to snatch a toddler have been jailed for a total of 68 years.

Witnesses heard the terrified mum scream ‘don’t take my baby’ as the robbers demanded she hand over her jewellery.

Ringleader Terry Marsh, Steven Weller, John McFadyen and his brother Isaac tried to rob Miss Reule in the middle of the road, demanding ‘give me your rings or I’m going to hurt your child’.

They were spotted by a group of builders who chased them off brandishing scaffold poles. 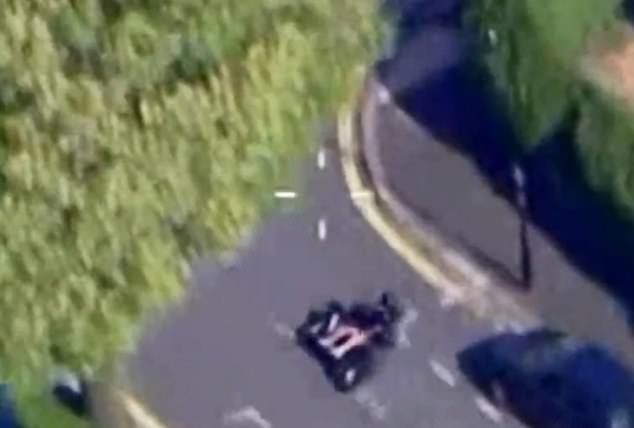 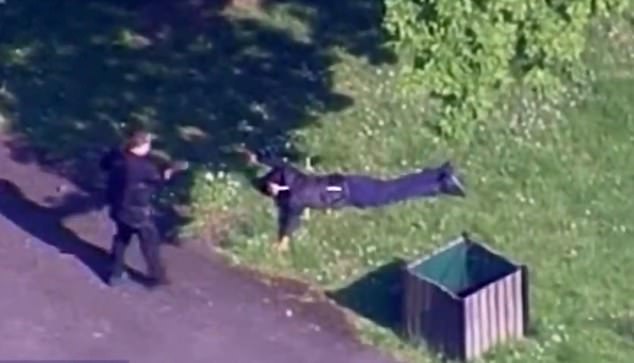 They were chased into a graveyard when one was detained, leading to a series of arrests

Footage of the attack in Richmond, south west London, was tweeted by the Britain’s Got Talent judge who urged the public to call the police ‘if u know these scumbags’ after it happened last June

All four were jailed at Kingston Crown Court today, along with six other members of the 12-strong gang who were also responsible for a string of high profile raids across London. Two were spared jail.

It later emerged the gang were behind the theft of £170,000 of camera equipment used to film the Oxford and Cambridge boat race.

Nine of the 12 had racked up 383 previous convictions for burglaries, handling stolen goods, car theft, aggravated vehicle taking, assault and robberies between them.   The other three men had no previous criminal records.

Speaking exclusively to MailOnline after the gang were convicted last week, Amanda Holden said: ‘I’m delighted these criminals have been brought to justice. It’s nice to see how social media can work in a positive way when we all work together.’

Today the thugs, aged between 18 and 36, and who were all linked to ringleader Marsh, 32, appeared for 12 offences, including conspiracy to rob, conspiracy to burgle, conspiracy to steal, criminal damage and handling stolen goods.

Judge Georgina Kent sentenced them, saying: ‘All 12 of you have been involved in conspiracies to steal, burgle and rob as well as other offences.

‘Between you you have caused a great deal of harm, loss and damage to a large number of victims.

‘Apart from the financial cost, there’s the human cost in anxiety, distress and fear caused to the victims and to those who witnessed and heard about the offences. Your offending has cost a great deal in police resources.

‘These were very professional planned and organised offences. The common denominator is Terry Marsh.’ 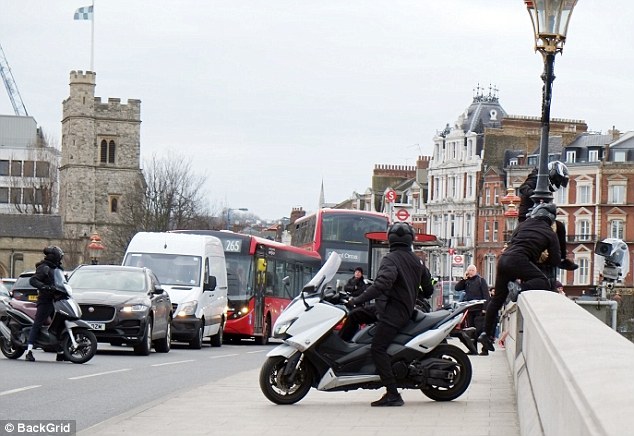 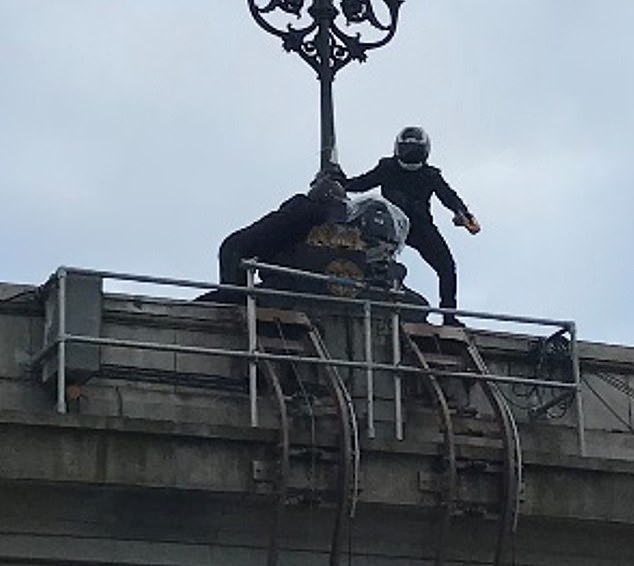 She said there was little forensic or physical evidence to the crimes which were mostly carried out at night and added: ‘Terry Marsh was supremely organised and diligent in rotating SIM cards and phones he used.’

She added: ‘At about 12.30pm on 21st June 2018 Mr Marsh, Mr Weller, Isaac McFadyen and John McFadyen attempted to rob a young mother who was with her child.

‘This was an extremely serious offence, the robbery was captured on CCTV and reported in the media.

‘Apart from the impact on the victim, the nature of offences caused shock and concern to those who heard about it.’

The McFadyen brothers approached the mother Phoebe Reule as she was walking hand in hand with her three-year-old son after picking him up from nursery. 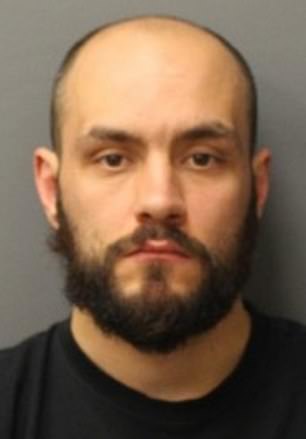 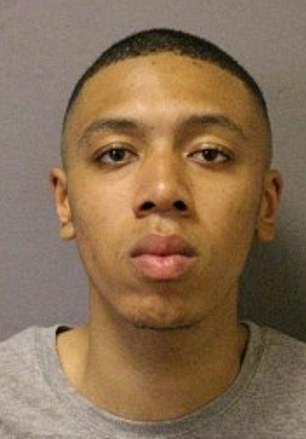 ‘They were waiting for Miss Reule so they must have targeted her when they walked past her. Mr Marsh and Mr Weller moved their bikes into Sandpits Road.

‘It’s striking that the robbers were so confident that they targeted their victims in full public view.

‘When Phoebe Reule and her son arrived at the mouth of Sandpits Road, the McFadyen brothers approached them together. She said she could see Mr Weller and Mr Marsh.

‘John McFadyen grabbed hold of Ms Reule by the arm, as he did so John McFadyen demanded her rings and threatened to hurt her child.

‘He said, ‘give me your rings or I’m going to hurt your child and take him away’. As he said that he bent down as if to move towards the child.’

She added: ‘Ms Reule was terrified, she instinctively picked up her son and dragged him back towards the road – fortunately there were no cars in the vicinity at the time.

‘The most serious aggravating feature was the targeting of the victim due to her vulnerability and the nature of the threat made.

‘A mother and her three-year-old son are extremely vulnerable. The threats that were made were calculated to exploit that vulnerability. 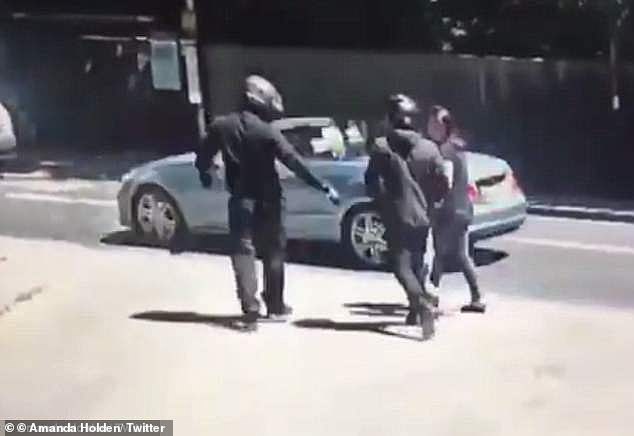 Two members of the gang were seen trying to snatch the woman’s three-year-old daughter if she didn’t hand over her jewellery in Richmond, south west London in June last year

‘To threaten a mother with violence towards a very young child and to threaten to take the child away is a most effective and distressing threat.

‘I have no doubt that this offence would have struck fear into any parent who heard about it.’

Taking the criminals off the streets has helped cut moped crime in the capital by 52 per cent in a year, the Metropolitan Police claim.

Three were arrested last May after a high-speed police chase that lasted more than 90 minutes and spanned 10 London boroughs.

The trio, who were piled on the same moped and drove the wrong way up the A40, tried to film their escape attempt. 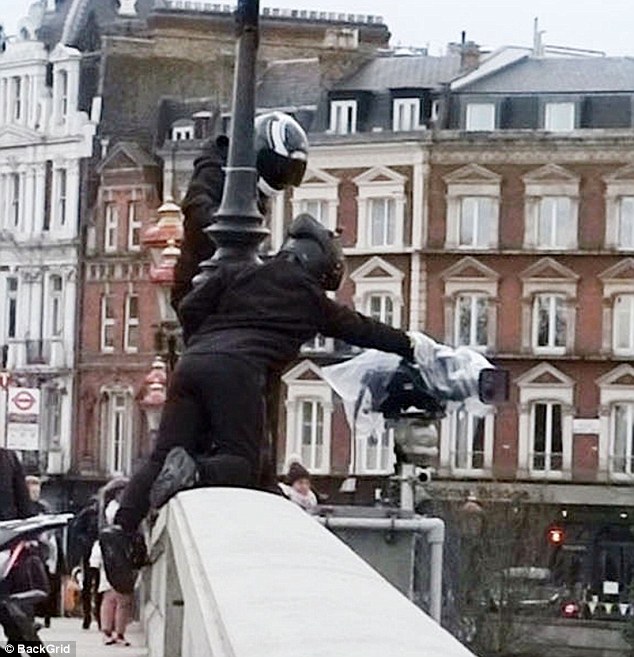 Ringleader Terry Marsh, of Fulham, was jailed for 13 years and two months with four years-and-a-half for the attempted robbery.

Pictured: Britain’s Got Talent judge Amanda Holden, whose neighbour was targeted in the robbery in Richmond last June

He was also found guilty of two further counts of robbery and possession of an offensive weapon at trial.

Myers got eight years in a youth offenders institution and a two year driving ban.

Kian Taylor, 20, of no fixed address, admitted attempted theft, going equipped to steal, criminal damage to a police car, dangerous driving, driving whilst disqualified and possession of an offensive weapon, and was found guilty of robbery after trial.

He was given nine years in a youth offenders institution and a two year driving ban.

He was spared jail. He got a two-year term suspended for 19 months with six months on an electronically monitored curfew from 9pm to 6am.

Mitchell Leaver, 25, of Battersea, south west London, admitted conspiracy to burgle. He got one year suspended for 18 months with a 9pm to 6am electronically monitored curfew for three months.

His twin brother Scott, of Lambeth, was found guilty of the same charge after trial. He got four years in prison.

He also got concurrent sentences – six months for possession of a weapon, 20 months for dangerous driving and four months for going equipped for theft.

Ram Monk got two years and eight months for conspiracy to burgle.

This was made of two years for conspiracy to steal, another two years consecutive of conspiracy to burgle and another four years 11 months for attempted robbery and one month for criminal damage.

Omar Tafat, 22, of Fulham, west London, admitted theft, going equipped to steal, criminal damage to a police car and breach of a criminal behaviour order, and was found guilty of two further counts of robbery and possession of an offensive weapon at trial.

Tafat got eight years and five months in jail – two years eight months for conspiracy to steal and four years and 11 months consecutive for attempted robbery and another month for criminal damage.

He got concurrent sentences of six months for weapons possession, four months for going equipped for theft and four and five months for two breaches of a Criminal Behaviour Order.