has said her claim that the world could end in 12 years if is not addressed was just ‘dry humor’.

The Democratic New York rep was responding to so-called ‘fact-checkers’ who mocked her assertion that we have ’12 years left to cut emissions in half’.

In a tweet posted yesterday evening, Ocasio-Cortez called the GOP ‘basically Dwight from The Office’ because they take everything so literally.

She wrote: ‘This is a technique of the GOP, to take dry humor + sarcasm literally and ”fact check” it. Like the ”world ending in 12 years” thing, you’d have to have the social intelligence of a sea sponge to think it’s literal. But the GOP is basically Dwight from ”The Office” so who knows.’

Last month as part of her campaign for the Green New Deal, she tweeted a reference to the ’12 years’ deadline. 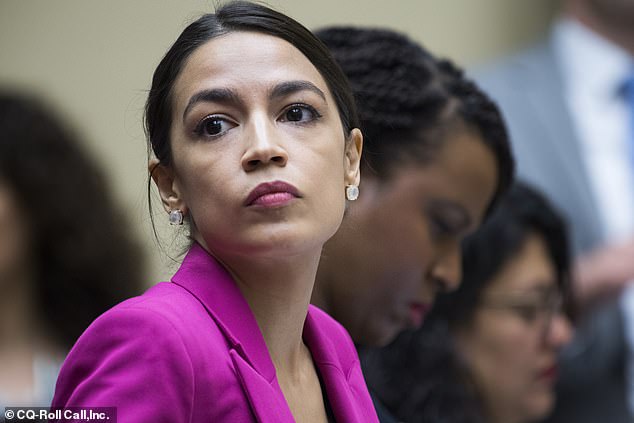 Despite referencing a UN report, AOC then claimed the 12-year deadline was not literal and should not be taken seriously

Ocasio-Cortez wrote: ‘Climate change is here + we’ve got a deadline: 12 years left to cut emissions in half. A #GreenNewDeal is our plan for a world and a future worth fighting for.’

Then during a live stream in April, Ocasio-Cortez again mocked critics who rebuffed the claim as a joke, making it clear she was serious about the figure.

She said: ‘We have 12 years left to cut emissions by at least 50 per cent, if not more, and for everyone who wants to make a joke about that, you may laugh, but your grand kids will not.’

The congresswoman then went on to compare those who ignore climate change with those who did not take direct action during the Civil Rights campaign.

She added: ‘So just know that while a lot of people can hide that their grandparents did that in the civil rights movement, you should also know that the internet documents everything. 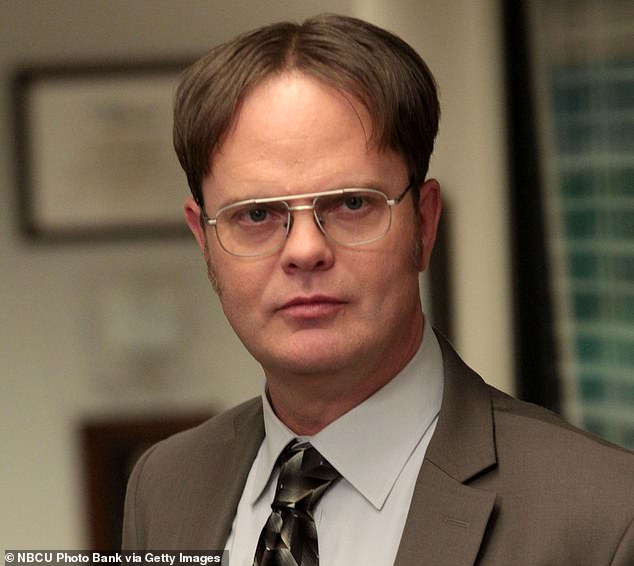 FACT: Rainn Wilson starred as Dwight Schrute in The Office. The character is known for correcting general statements with literal responses 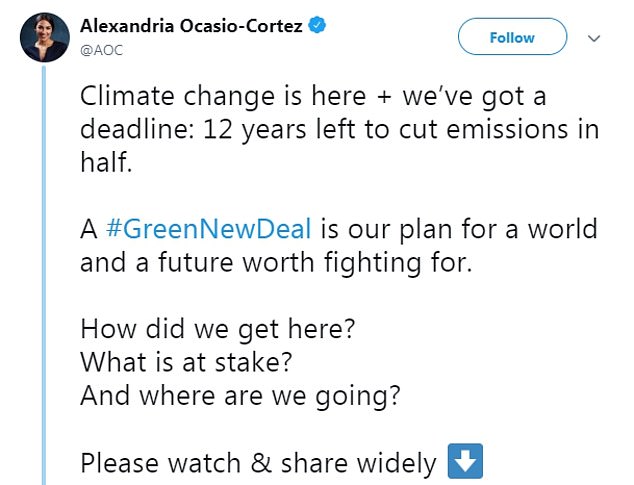 Despite tweeting in April that the Green New Deal was a way to help cut emissions before the 12-year deadline was up, Rep Ocasio-Cortez more recently said it was a joke

‘And your grandchildren will not be able to hide the fact that you fought against acknowledging and taking bold action against climate change.

‘And for those of you who are trying to mock and delay this moment, I mean, I just feel bad for you. I pity you for your role in history right now.’

The figure of 12 years comes from a group of scientists who wrote a for report to the UN Intergovernmental Panel on Climate Change (IPCC), which was published last October.

In it some of the world’s leading climate scientists warned there is only a dozen years for global warming to be kept to a maximum of 1.5C.

After that period even half a degree increase would significantly worsen the risks of drought, floods, extreme heat and poverty for hundreds of millions of people, the report said.

On Monday Democratic presidential hopeful Bernie Sanders will headline a rally with AOC at Howard University to support the Green New Deal.