Liberal fans of the San Francisco 49ers are upset that the team drafted Trump-supporting Nick Bosa in the NFL draft last month, but two of his new teammates say they don’t care about his politics.

Richard Sherman and Jimmy Garoppolo said this week that Bosa, the star defensive end from Ohio State who was picked second overall by San Francisco, will be judged by his performance on the field.

‘One thing about football is that nobody really cares what you say if you can play,’ Sherman told on Monday. 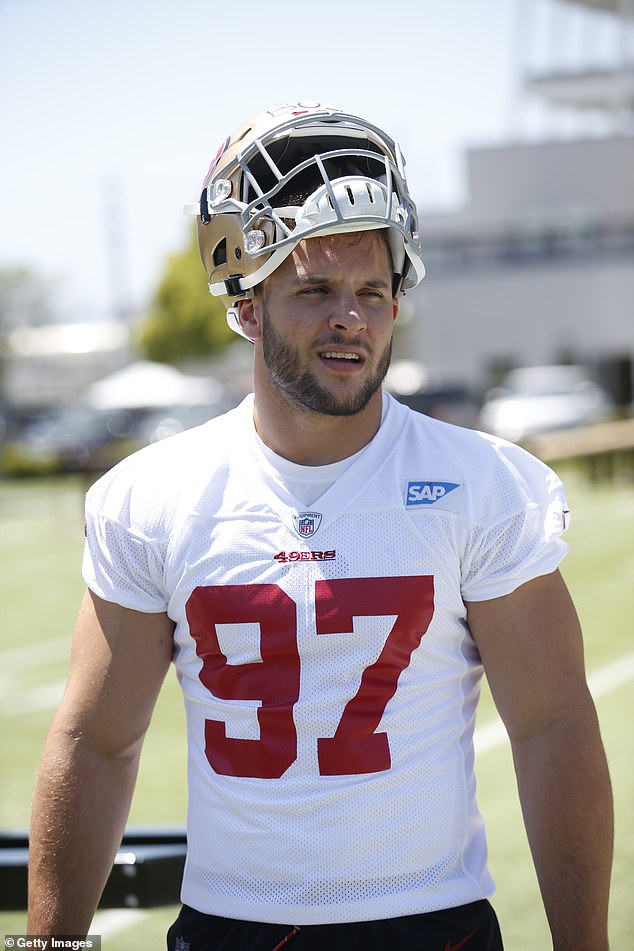 Nick Bosa (above), who was drafted No. 2 overall by the San Francisco 49ers in last month’s NFL draft, attends the team’s rookie camp in Santa Clara, California last week 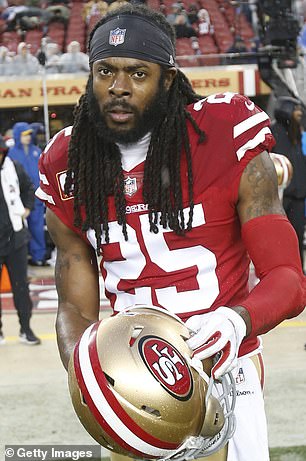 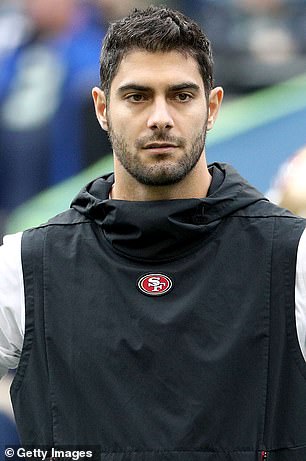 Sherman’s voice carries a great deal of weight in the 49ers locker room considering his outspoken nature and track record for leadership during the course of his eight-year career.

Sherman is also known for speaking out about racial and social justice issues.

He supported former 49ers quarterback Colin Kaepernick, who began the on-field protest of kneeling during the singing of the national anthem as a way to call attention to police brutality against African Americans.

But conservatives denounced Kaepernick and the ‘take a knee’ movement, saying it was disrespectful to law enforcement and the military. 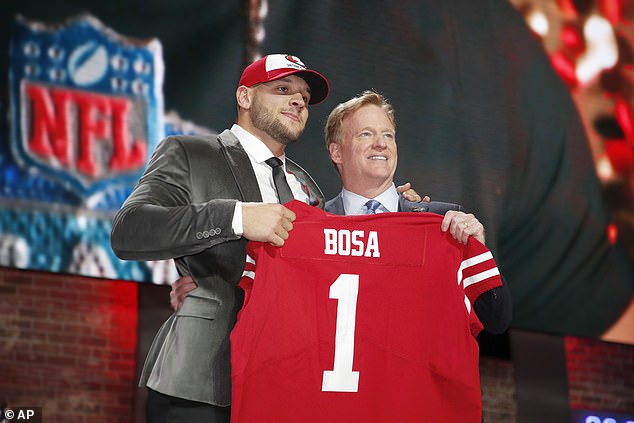 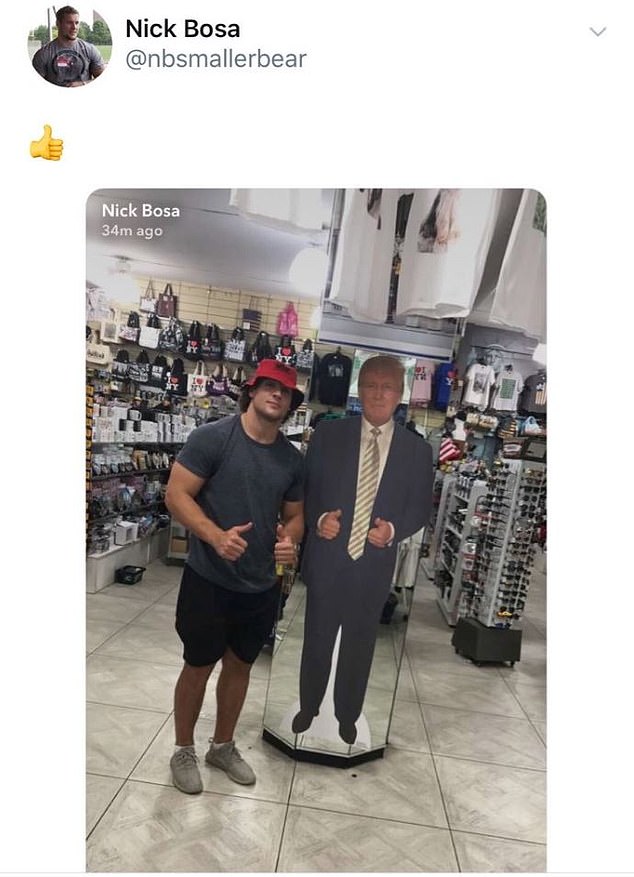 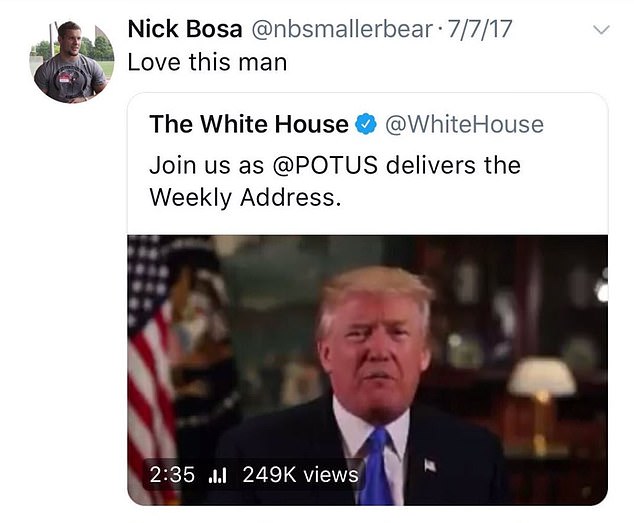 In one of his prior tweets, Bosa called Kaepernick ‘a clown.’

Aside from supporting Donald Trump’s presidency, Bosa had a history of tweeting negative statements about black pop culture icons and entertainment properties – posts which his agent recently scrubbed from his online presence as his draft prospects looked up.

Bosa also wrote that NBA star Dwyane Wade ‘looks like a parrot fish’ and noted that Black Panther was the ‘worst Marvel movie.’

He also tweeted that ‘Beyonce’s music is complete trash’ in 2016, just six days after she released her album Lemonade, featuring the politically-charged song Fomation. Earlier in the year, Beyonce had faced criticism for wearing a Black Panther-inspired outfit and performing Fomation during the Super Bowl halftime show. 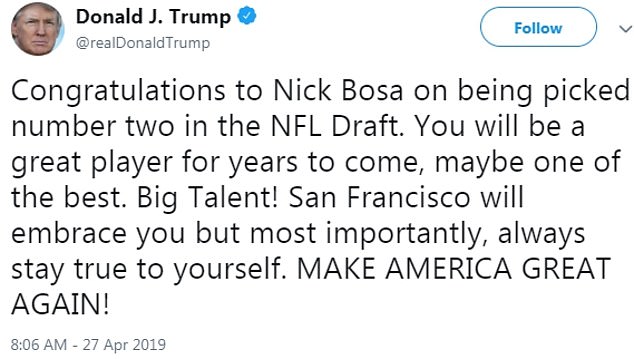 Over the years, Bosa has also made no bones about supporting Trump, tweeting ‘Love this man’ while retweeting a video of Trump’s weekly address and posting a photo of himself giving the thumbs up next to a cardboard cutout of Trump.

After Bosa was drafted, the president posted a congratulatory tweet, writing: ‘Congratulations to Nick Bosa on being picked number two in the NFL Draft.

‘You will be a great player for years to come, maybe one of the best. Big Talent!

‘San Francisco will embrace you but most importantly, always stay true to yourself.

In addition to his negative tweets and pro-Trump comments, Bosa apparently ‘liked’ a variety of tweets and Instagram posts from people who are said to be or have ties to white supremacists, as revealed in a of  by @RzstProgramming.

But Sherman says the tweets won’t be an issue.

‘But at the end of the day, that’s all that matters in football.

‘Is he getting sacks on Sunday? Is he helping our team? Is he being a good teammate?

‘Those are things that matter.

‘Now, if he’s a bad teammate, that’s something we’ll address.’

‘Not in the locker room, those type of things aren’t even discussed,’ Garoppolo told Fox Business Network when asked about Bosa’s past tweets.

It appears a segment of the 49ers fan base on Twitter is not as willing to forget Bosa’s tweets.

‘”Nick Bosa” Well I see the @49ers found someone to stand for the flag, that’s a #racist,’ tweeted @blkdogstar59.

‘From Colin Kaepernick to Nick Bosa in three years. From a racism resistor to a racist troll. Helluva ride, Niners Nation,’ wrote @EdgeofSports.

‘my 49ers just drafted a racist Unc. Go read Nick Bosa tweets. They lost me as a fan. They haven’t learned their lesson from past picks. #Character,’ wrote @KevinWatts0228.

‘The San Francisco @49ers just drafted @realDonalTrump supporter Nick Bosa proving the only color that matters in the @NFL is green,’ wrote @FeoChin.

‘The same team that got rid of #colinkaepernick someone protesting injustice and people like Nick Bosa, drafts him as No. 2,’ @_justebetty wrote, adding ‘oh wait racists usually don’t ever care’ and ‘Privilege at its finest.’ 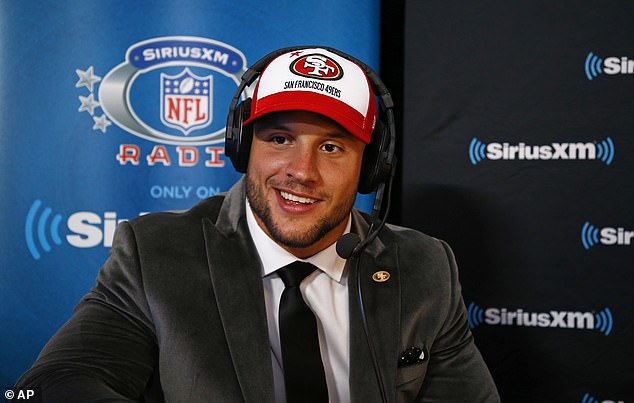 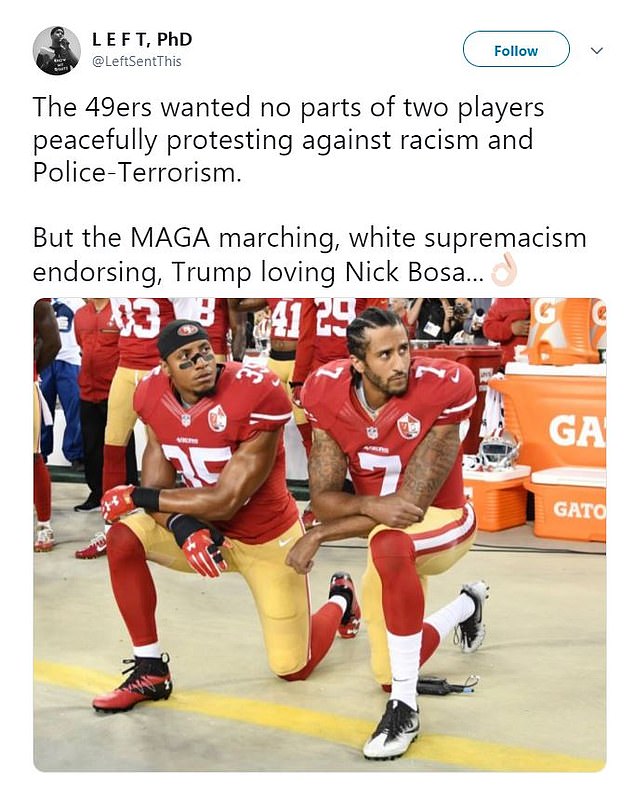 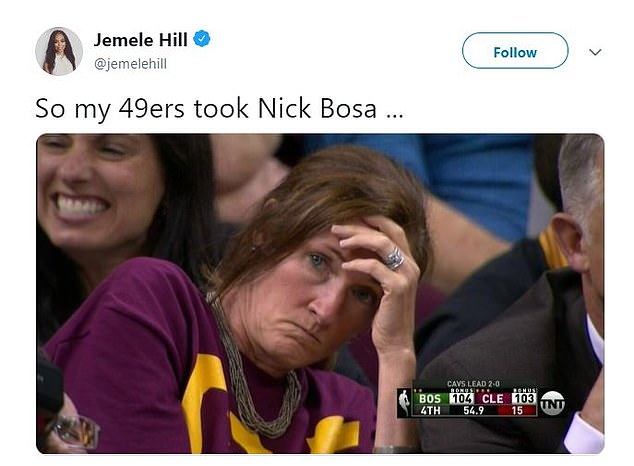 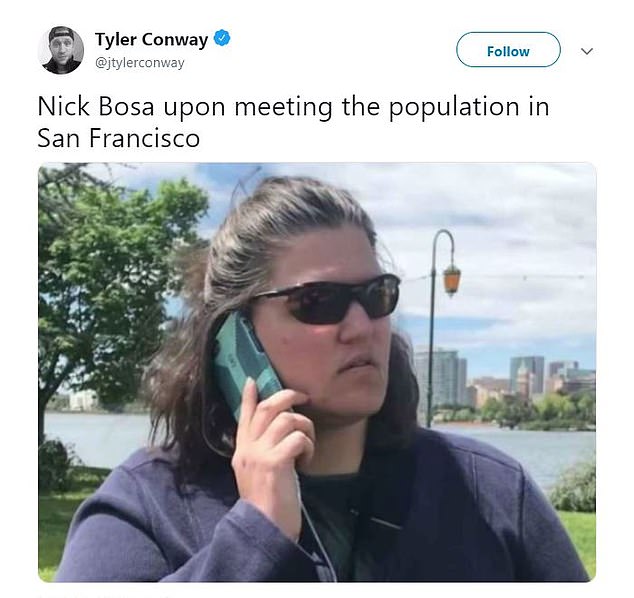 ‘Nick Bosa voice cracking because he thinking of having to go outside and see diversity and liberalism everyday,’ @tokthadon wrote.

The night Bosa was drafted by the 49ers, he told media that he ‘was a little insensitive in some of the things I said’ and the he’d ‘learned a lot in the past few months,’ according to.

The next day Bosa apologized for his August 2016 tweet in which he called Kaepernick a ‘clown,’ claiming that the tweet was not meant as a dig against the former quarterback’s work towards achieving social justice.

‘It wasn’t directed towards (Kaepernick’s stance),’ Bosa said of the tweet, according to .

‘It’s not like I’m saying his stance and what he was doing, that’s not what I was calling or talking about at all. It was just a specific thing that happened and me as a young kid a thought popping in my head and boom, decided to tweet it out. Bad decision. I respect what he’s done. If it empowers anybody then he’s doing a good thing. So, I apologize for that.’

Not all the tweets were negative, however. Fox News commentator Tomi Lahren, who Bosa appears to be a fan of, posted this tweet about his being drafted to the 49ers

However, some saw the draft pick in a more positive light.

Fox News commentator Tomi Lahren, who Bosa appears to like judging by the frequency with which engages with her posts, tweeted, ‘Glad to see @49ers will have a true America-loving star in [Nick Bosa] who can not only play extremely well, but will also STAND for his country and all those who have fought to protect and defend it!’

Kaepernick refused to stand for the national anthem to protest police brutality toward black men. It was not a protest against the military, as Lahren suggests.