She is a British actress with a long list of acting credits.

And Gemma Arterton commanded attention when she attended a private dinner hosted by Michael Kors at Browns Hotel in Mayfair, to celebrate the opening of the new collection flagship store in Bond Steet,

The former Bond Girl, 33, put on a put on a edgy display in a pair of skin-tight leather trousers paired with a matching biker jacket emblazoned with Studio 54 on the back, in homage to the famous nightclub. 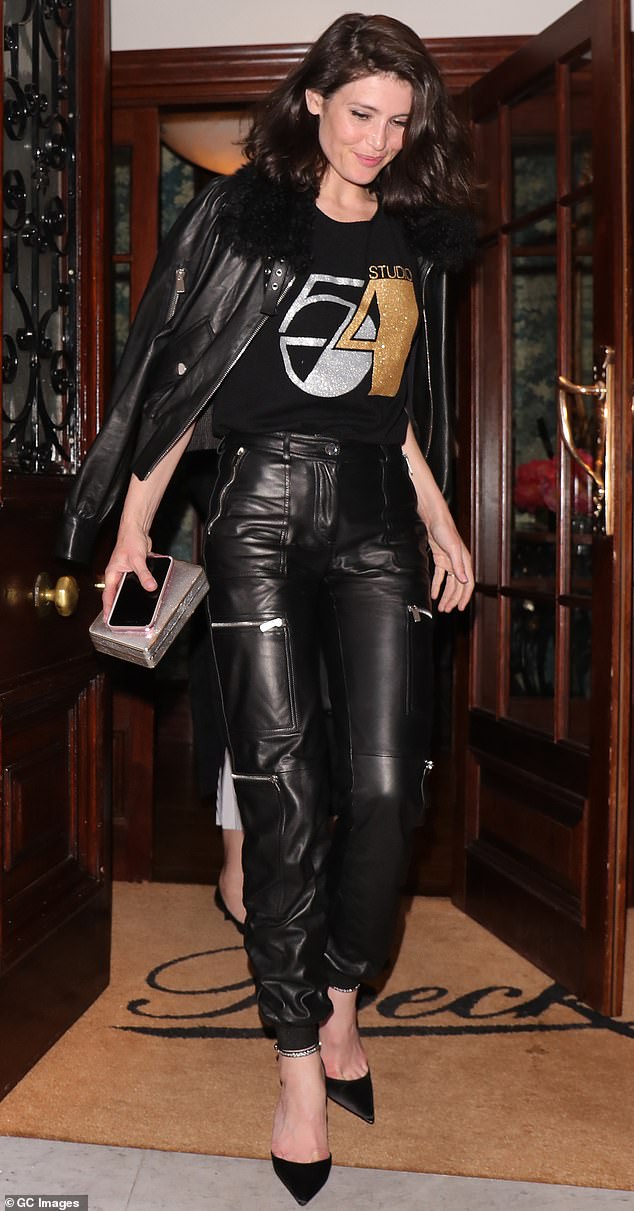 Stylish: Gemma Arterton, 33, commanded attention when she attended a private dinner in a leather ensemble, hosted by Michael Kors at Browns Hotel, Mayfair,  London on Thursday 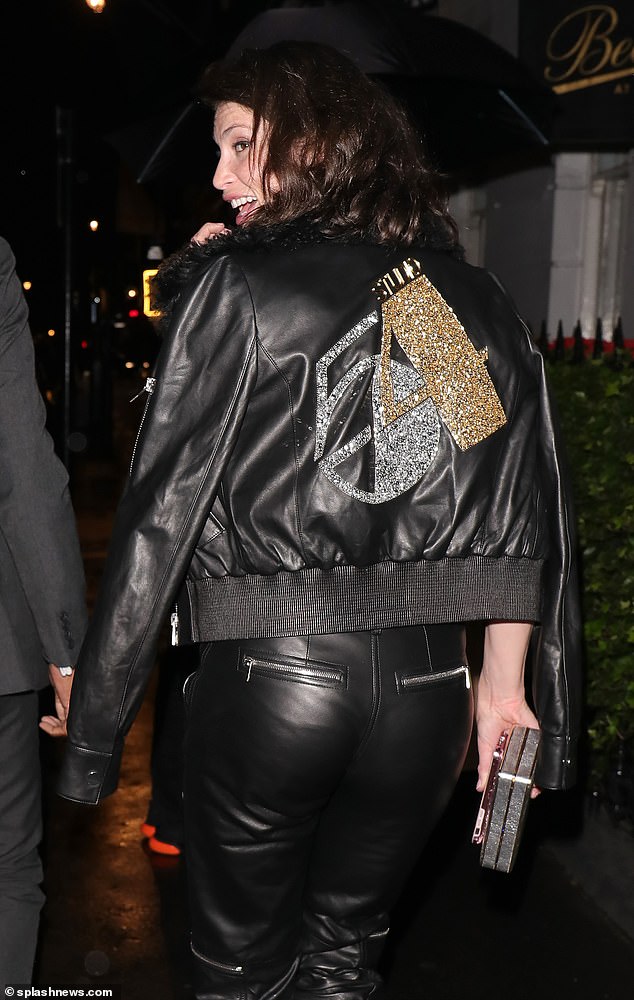 Check it out at Moda Operandi

Gemma Arterton went hell for leather as she stepped out to a Michael Kors bash, dressed head-to-toe in the brand.

The actress rocked a look that was hot from the AW19 catwalk, featuring a pair of biker trousers, along with a leather jacket. This isn’t any ordinary leather jacket though…

Aside from the chic shearling collar, the cover-up also boasted a glittery Studio 54 slogan! Notorious back in the 70s for being the ultimate wild celebrity hang-out, we can see why Michael Kors chose to pay homage to the iconic club.

Click (right) to check out the jacket at Moda Operandi, or get the look for less with the furry-collared bikers from the high-street below.

Keeping it chic, the Murder Mystery actress wore her fur-collared jacket placed over her shoulders as she sauntered out of the venue in black court shoes.

The star also sported a black T-shirt with the same Studio 54 logo printed on in silver and gold and kept her essentials nearby in a metallic clutch bag.

Gemma shot to fame starring in comedy St Trinians in 2007, before scoring worldwide stardom for her turn as Strawberry Fields in Quantum Of Solace a year later in 2008.

Metallic details: The Bond Girl put on a put on a edgy display in a pair of skin-tight leather trousers paired with a matching biker jacket emblazoned with Studio 54 on the back

The actress has since admitted the early stages of her career were more about her learning what roles she didn’t want to take on.

Speaking in an interview with The Guardian newspaper earlier this week, she explained: ‘The first six years of my career were all about me learning what I didn’t want to do.

‘If I’d been really strong-minded back then, I would have turned them down. But I wasn’t, so I own that. I think self-belief is very rare in young actors. 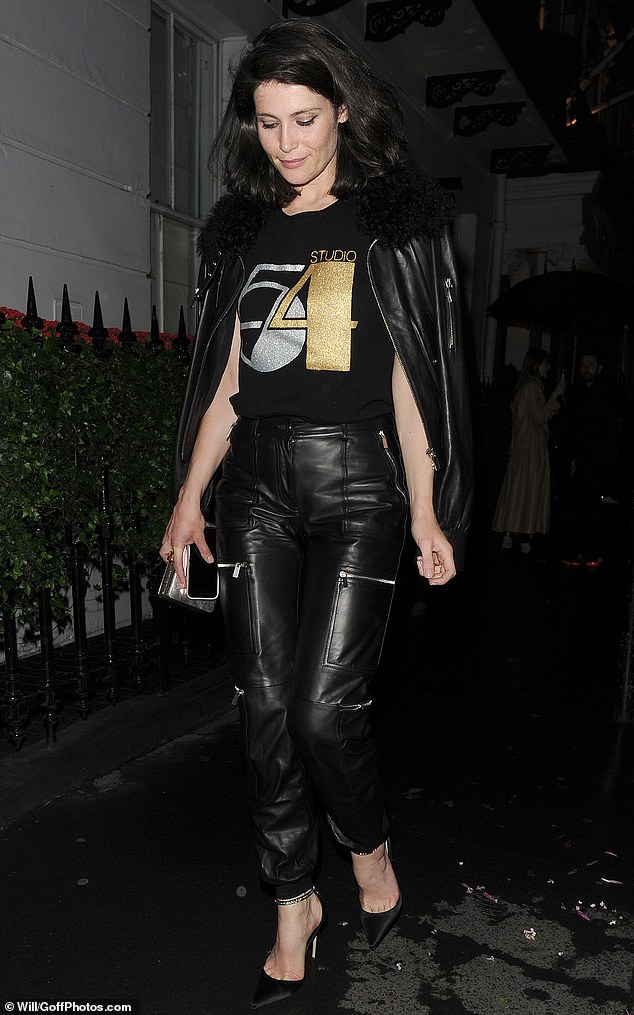 Beauty: The star also sported a black T-shirt with the same logo printed on in silver and gold and kept her essentials nearby in a metallic clutch bag 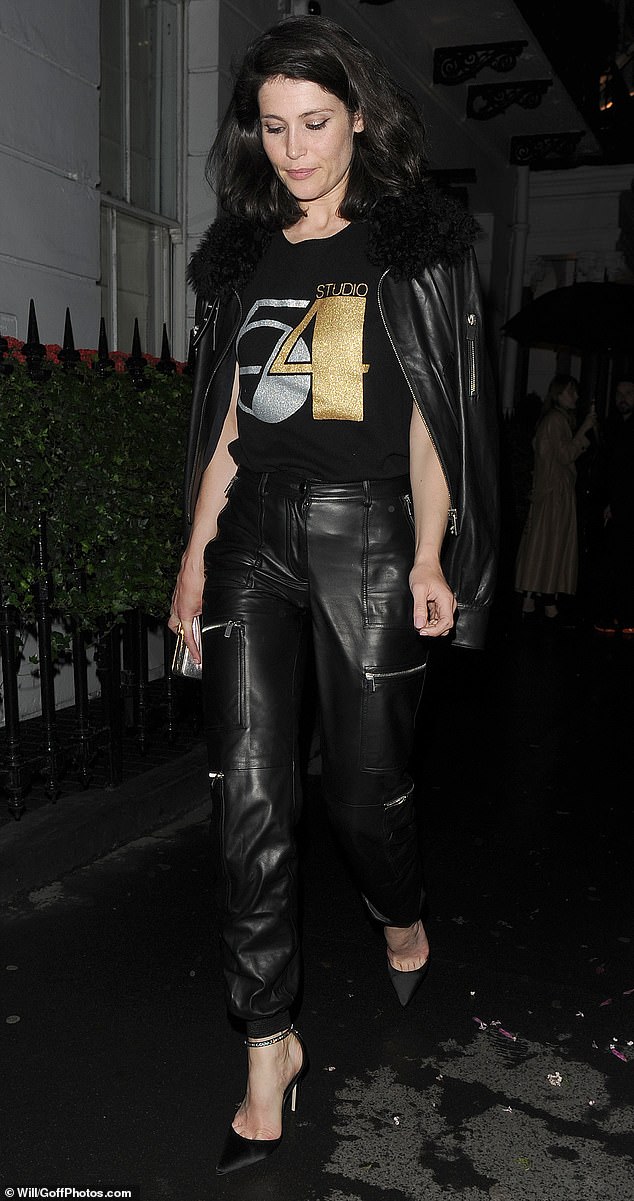 ‘Whenever I meet a really confident young actor, I just think, “F**k, yes, go on”. I wasn’t that person when I was younger. I wish I was.’

Although she admitted she ‘doesn’t regret’ taking on the Bond Girl that was largely the launchpad of her career, Gemma said she ‘could have done better, really’.

Since her early days in the business, the actress has gone on to secure numerous stage roles, including Made In Dagenham, Nell Gwynn and Under The Skin. 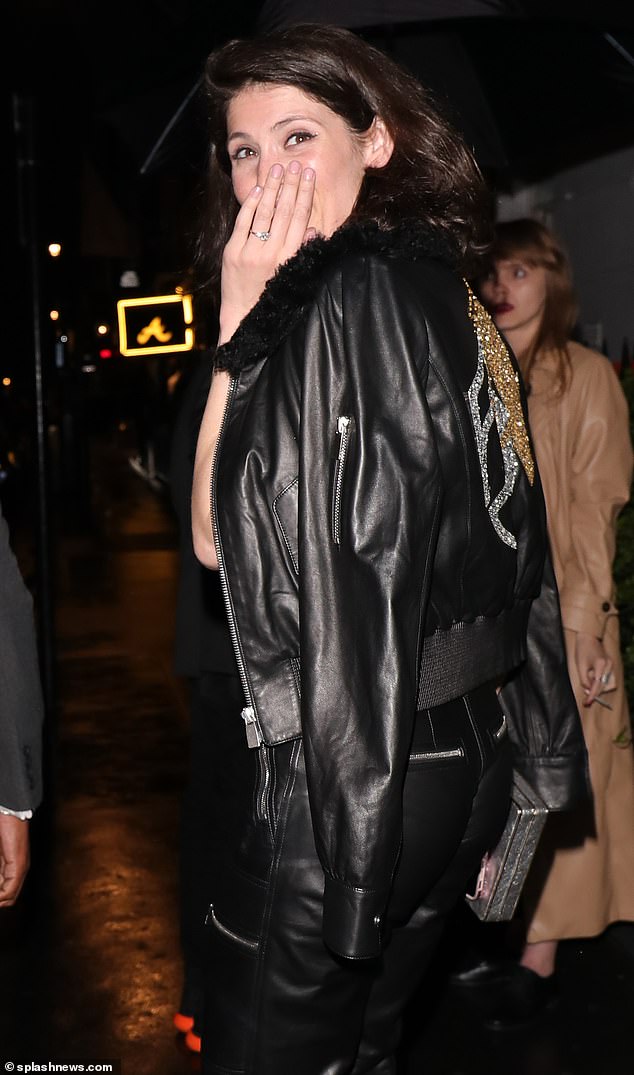 Smile! Gemma covered her mouth when laughing at something