Three missiles North Korea tested over the last week have ‘Russian technology fingerprints all over them’, military experts have warned.

The country’s leader Kim Jong Un supervised the launch of the weapons on Saturday and Thursday – and they are said to have striking similarities to the Russian-designed Iskander.

The missiles were short-range, so do not mean Kim has decided to end his self-imposed moratorium on testing long-range missiles that could reach the US mainland.

It comes at a time of heightened tensions between the two countries, with it emerging yesterday Trump’s administration had seized a large North Korean cargo ship near Indonesia for carrying an illegal shipment of coal. 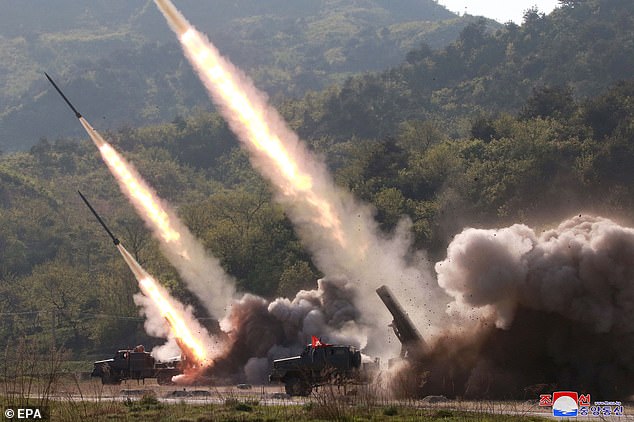 North Korea have launched three missiles over the last week, with two reportedly fired yesterday (pictured), and military experts have claimed they have ‘Russian technology fingerprints all over them’ due to them resembling a Russian-designed Iskander 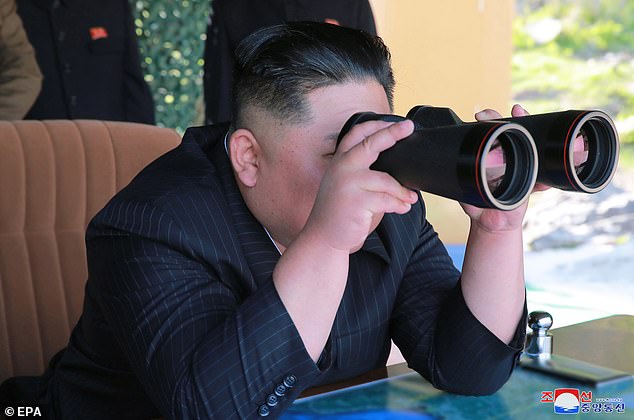 Kim Jong Un, leader of the Democratic People’s Republic of Korea, looks on while overseeing the strike drill of military units at an undisclosed location in North Korea yesterday 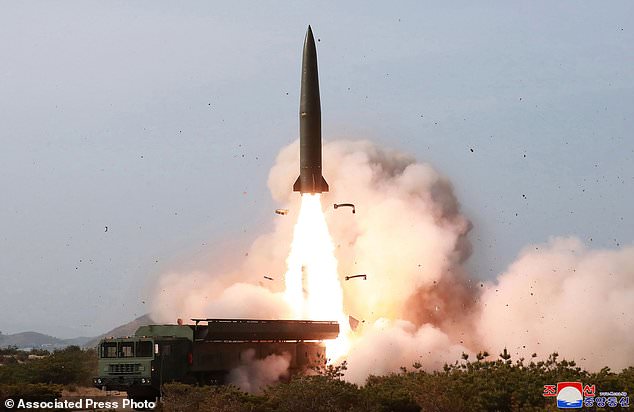 The missile launches suggest Kim is expanding the battle readiness of his missile forces which could have a major impact on the safety of American allies and US forces in the region.

The Iskander is a short-range, nuclear-capable ballistic missile that has been in the Russian arsenal for more than a decade.

Marcus Schiller, a leading expert on North Korean missiles who is based in Germany, said: ‘There are Russian technology fingerprints all over it.’

He added that the missiles may not have been bought directly from Russia but may have been delivered from another country while North Korea made parts such as the outer shell and frame. 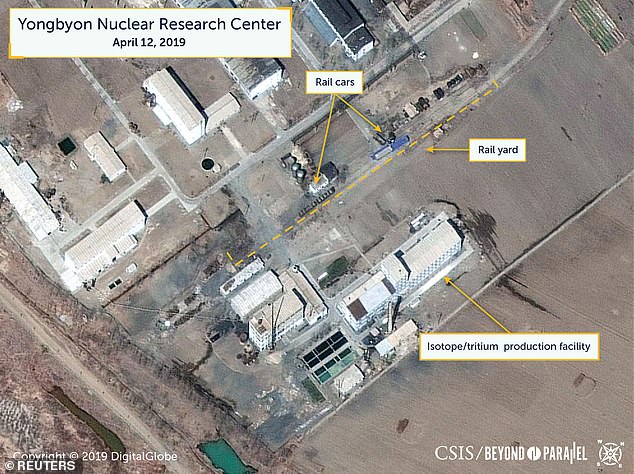 Researchers in Washington believe that these satellite images, showing railcars at North Korea’s nuclear research site in Yongbyon, could be a sign that bomb fuel is being prepared

The move ended a pause in ballistic missile launches that began in late 2017 and has alarmed North Korea’s neighbours.

Two projectiles were launched from a base in North Korea’s north-west and aimed toward the east yesterday, Seoul defence officials said.

Experts said there was ‘no doubt’ the objects, which are said to have flown around 260 miles and 167 miles respectively, were missiles.

It came after the North launched rocket artillery and an apparent short-range ballistic missile into the ocean on Saturday.

The Iskander is designed to fly at a flattened-out altitude of around 25miles and to make in-flight guidance adjustments.

The weapon is also quicker to launch – making it harder to destroy on the ground due to its solid fuel engine – and more accurate because of its advanced guidance system.

Despite claims by senior members of the Trump administration the missiles are not a threat to the US, in a battle scenario they would likely be used to attack targets well behind the front-lines, such as US military bases in South Korea.

There are roughly 28,000 US troops stationed in South Korea and tens of thousands more family members and civilian Department of Defence employees.

President Donald Trump responded to the launch yesterday by saying the US was ‘looking very seriously’ at it.

He said while North Korea wants to negotiate with the US, he does not think it is ready to do so. 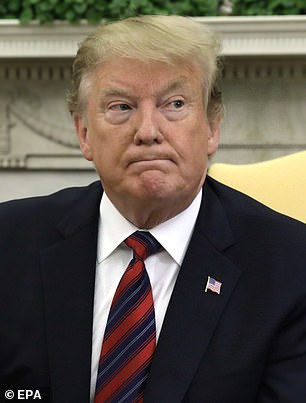 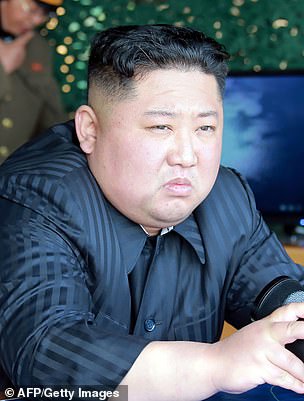 ‘We’re looking at it very seriously right now. They were smaller missiles, they were short-range missiles,’ Trump told reporters at the White House.

‘Nobody’s happy about it but we’re taking a good look and we’ll see.

‘The relationship continues … I know they want to negotiate, they’re talking about negotiating. But I don’t think they’re ready to negotiate,’ Trump said.

Yesterday’s projectile was fired eastwards and appeared to originate from Sino-ri in North Pyongan province. 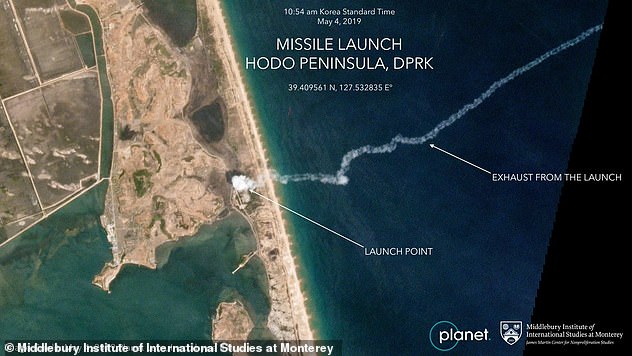 North Korea’s state media said that leader Kim Jong Un had overseen a rocket and tactical guided weapons test. Pictured is a satellite image taken just after one of the missiles was launched on Saturday

South Korea is still analysing whether it was a single or multiple projectiles.

The decades-old Sino-ri operational missile base, 45 miles north-west of Pyongyang, is one of North Korea’s longest-running missile facilities.

It houses a regiment-sized unit equipped with Nodong-1 medium-range ballistic missiles, according to the Centre for Strategic and International Studies.

Anything fired from it in an easterly direction would have to cross the Korean peninsula before reaching the sea.

They also showed what appeared to be a new short-range ballistic missile fired from a launch vehicle.

Pyongyang said criticism from about that launch was a ‘cock-and-bull story’ and claimed it was a regular defensive exercise.

A separate statement by a North Korean foreign ministry spokesman described the launches as a ‘routine and self-defensive military drill’.

A day earlier, the South’s Joint Chiefs of Staff said they detected the North firing multiple projectiles towards the sea from near the eastern town of Wonsan.

The launches are believed to have marked North Korea’s first ballistic missile test in more than 500 days.

The North Korean statements hinted that Saturday’s weapons launches were a response to joint military drills conducted by the US and South Korea in March and April.

The North also criticised the test of a US Minuteman intercontinental ballistic missile from a US Air Force base in California last week.

The country first displayed a mock-up of an Iskander-like missile at a military parade in 2018. This week’s launches mark its first known flight tests.

US demands release of political prisoners in North Korea

The US called on North Korea on Thursday to dismantle camps estimated to be holding tens of thousands of political prisoners, while Pyongyang hit back at Washington’s sanctions.

US President Donald Trump and North Korean leader Kim Jong Un have met twice in the last year, with Washington seeking curbs on Pyongyang’s nuclear programme and North Korea pursuing sanctions relief – but the rapprochement appears to be in limbo.

‘The human rights situation in North Korea is deplorable and has no parallel in the modern world,’ senior U.S. diplomat Mark Cassayre told the United Nations Human Rights Council during a five-year review of North Korea’s record.

UN rights investigators have estimated between 80,000 to 120,000 people are in political detention camps in North Korea where torture and other violations are taking place that they say may amount to crimes against humanity.

As well as urging those camps to be closed and their inmates released, charge d’affaires Cassayre exhorted authorities to allow aid workers unrestricted movement and access to people in need, and to tolerate possession of religious texts.

North Korea, which also came under criticism from Britain and Canada at Thursday’s meeting, denies the existence of political prisoners and says it is the victim of propaganda.

Michael Elleman, director of the Nonproliferation and Nuclear Policy Program at the International Institute for Strategic Studies, said further analysis of the missiles’ performance will provide clues as to whether it was produced by Russia.

He said: ‘If its flight path and accuracy were marginal or inconsistent with known Iskander trajectories and performance, then I think some form of local development with external technical assistance is more likely.

‘The key here is that one cannot make a new system without undertaking certain development steps. I have seen no evidence of such activity.’

Initial reports suggested at least one of the tests did involve an Iskander-like trajectory.

The Iskander missile system has been part of the Russian arsenal since 2006. The Iskander-M version used by the Russian military is more than 7m in length, can weigh more than 4,000kg and has a range of about 250 to 310miles.

Russia first tested it in combat in 2008, against Georgia.

The Iskander missiles have long been a source of tension in Europe and were cited by President Trump as a key reason behind his decision to break with the 1987 Intermediate-Range Nuclear Forces Treaty in February.

The treaty bans production, testing and deployment of land-based cruise and ballistic missiles with a range of 310 to 3,410miles.

Such missiles only take a few minutes to reach their targets, leaving no time for decision-makers and raising the likelihood of a global nuclear conflict over a false launch warning.

Moscow claims the Iskander-M’s range is just below the operational limit and should not be considered a treaty violation.

Russia has always seen the Iskander missile as a potential export.

To avoid running afoul of international non-proliferation restrictions, Russia produces a less-formidable version that has a reduced range and is designed to carry a smaller payload for sales abroad.

It has sold that missile – called Iskander-E – to Algeria and Armenia and has reportedly discussed exports to Iran, Libya, the United Arab Emirates, Malaysia and Saudi Arabia.

He claimed Syria has expressed interest in buying its own Iskanders, but Russia has declined.

A United Nations embargo in place since 2006, when the North started nuclear testing, bans supplying the North with major arms, including ground-to-ground missiles, and UN sanctions prohibit the transfer of ballistic missiles and related technology.

If North Korea is producing an Iskander clone, it would not be the first country to do so.

South Korea has what many believe is its own Iskander-inspired missile – the Hyunmoo-2.

China also has a similar missile, called the DF-12 or M20 that was also built with exports in mind.

The weapons demonstrated potential capability to reach deep into the US mainland.

Since then, Kim has said the North would not test nuclear devices or ICBMs but diplomacy has stalled in recent weeks.

In bitter exchanges the North has taken relentless aim at US Secretary of State Mike Pompeo. 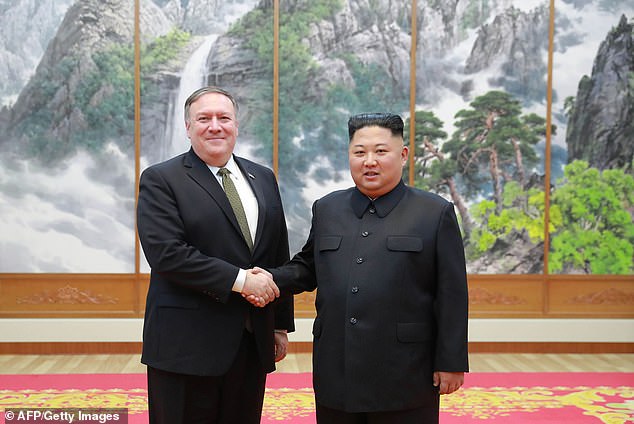 Pyongyang launched an extraordinary attack on Pompeo last month, questioning ‘whether he is indeed unable to understand words properly’.

The North demanded he stand down from nuclear talks to be replaced by someone who is more ‘careful and mature in communicating’.

Last year he was condemned by the North for his ‘gangster-like’ insistence that the North move towards unilateral disarmament.

A U.S. think tank said the pictures showed movement at the site which could indicate the reprocessing of radioactive material.

Sanctions against the North over its nuclear and missiles programmes remain in place.

Experts have estimated the size of North Korea’s nuclear arsenal at anywhere between 20 and 60 warheads.

Brett Kavanaugh hearing LIVE: Trump's SCOTUS nominee testifies before the Senate Judiciary Comittee
NCAAB Results
Eugenie and Jack miss their first Queen's Christmas lunch as newlyweds due to illness
Britain's oldest police officer, 74, chases down a suspect and arrests him
Mother and half-brother jailed for murdering boys they had through incest
Thieves steal treasures 'worth up to a BILLION EUROS' in early-morning raid on museum in Germany
Bus driver, 47, is killed just yards from his front door
Hundreds of coronavirus patients are pleading to join clinical trials of a US-made Ebola drug