has once again falsely claimed he has given $91billion in disaster aid to Puerto Rico, even trying to use a bar chart as evidence.

Trump pulled out the chart and said Puerto Ricans should be ‘grateful’ for his help as he spoke at a campaign rally in Panama City Beach, on Wednesday night.

The president was promising Floridians that he would give the state $448million in recovery funds for last year’s Hurricane Michael when he suddenly brought up Puerto Rico.

‘FEMA did a tremendous job here and elsewhere, by the way,’ he said. ‘They had this, they had , they had Puerto Rico. Puerto Rico got $91billion. I understand they don’t like me. It’s the most money we’ve given to anybody.’ 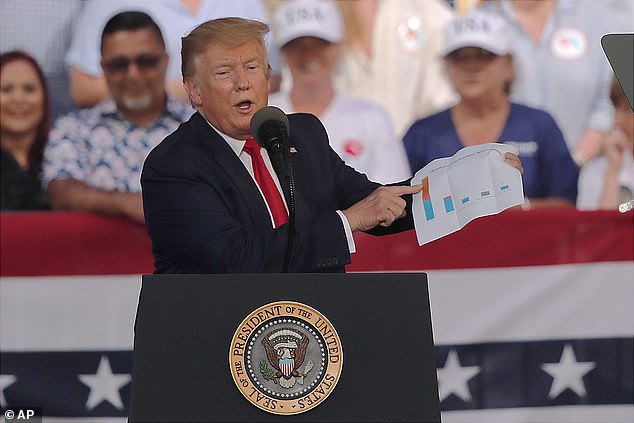 Donald Trump has once again falsely claimed he has given $91billion in disaster aid to Puerto Rico, even trying to use a bar chart as evidence

‘We’ve never given $91billion to a state. We gave it to Puerto Rico,’ he continued. ‘In fact, I brought a chart. Would you like to see a chart? Very haphazardly, I just happen to have it with me.’

Trump then pulled a standard-sized piece of paper out of his suit jacket, joking he didn’t put the chart on a big board because ‘that costs the government too much money’.

‘But you can all see that!’ he exclaimed, holding up the small piece of paper. ‘That’s Puerto Rico,’ he said, pointing at the side of the chart with the tallest bar graph.

‘They don’t like me,’ he repeated. ‘And what the Democrats want to do, they want to give more and more and I say, “You know what? I have a great relationship with the people of Puerto Rico, but it hasn’t been fair.’ 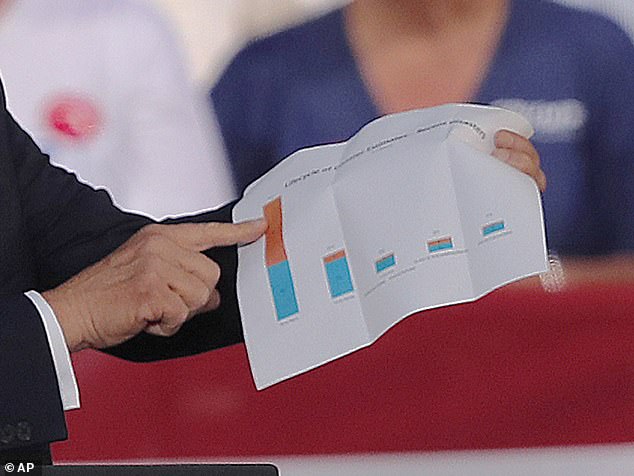 Trump pulled a standard-sized piece of paper out of his suit jacket, joking he didn’t put the chart on a big board because ‘that costs the government too much money’

‘But you’re getting your money one way or another and we’re not going to let anybody hold it up,’ Trump told his Floridian fans. ‘And I think that the people of Puerto Rico are very grateful to Donald Trump for what we’ve done for them.’

Congress has so far only distributed around $11billion in aid to Puerto Rico.

The $50billion in future disaster disbursements is only speculative and it could be decades before the island sees the funds, which would still require future appropriations by Congress.

Plus, $91billion is not even the largest figure ever provided to a state.

The US government spent more than $120billion on Hurricane Katrina relief, and the bulk of those funds went to Louisiana.

Trump also raised eyebrows when he laughed alongside a supporter who screamed ‘Shoot them!’ as he talked about immigrants at the border.

The president first brought up the very first speech he gave after announcing his presidential run, in which he declared that Mexicans coming to the US were ‘rapists’. 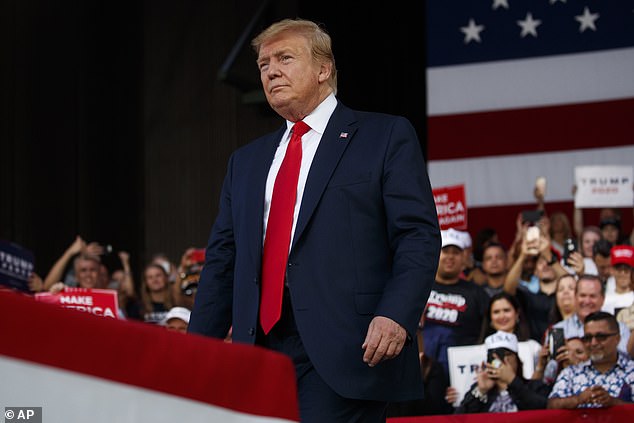 Trump repeatedly claimed he gave Puerto Rico $91billion in disaster relief. The state has actually only received $11billion from Congress 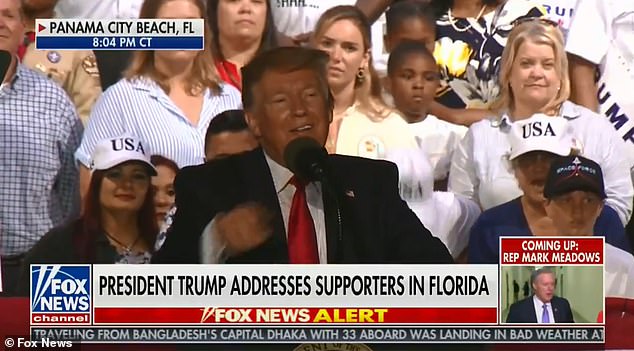 Trump also raised eyebrows when he laughed alongside a supporter who screamed ‘Shoot them!’ as he talked about immigrants at the US-Mexico border

‘I talked about what’s happening. I mention the word rape,’ he told the crowd. ‘The fake news media, they went after me. Guess what? That speech was so mild compared to what’s actually happening.’

Trump retold his story of women being smuggled across the border ‘tied up, with tape over their mouths’.

The president then noted that he doesn’t let border control ‘use weapons’ against immigrants even though ‘other countries do’.

‘But how do you stop these people?’ Trump asked as his fans began to shout ‘Build the wall’.

‘Shoot them!’ one fan replies, eliciting laughs from both Trump and the crowd.