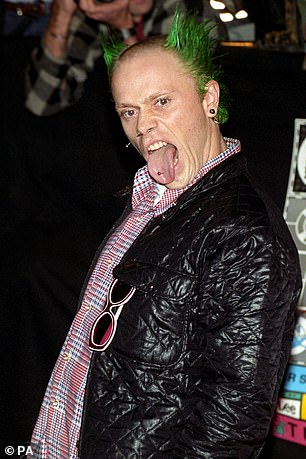 A previous hearing, at which the inquest was formally opened and adjourned, was told that the much-loved singer (pictured) died by hanging

Prodigy star Keith Flint died by hanging and had cocaine, alcohol and codeine in his system at the time, an inquest heard today.

The 49-year-old was found dead at his home in the Essex hamlet of North End on March 4.

Essex Senior Coroner Caroline Beasley-Murray recorded an open conclusion, saying: ‘Was he just larking around and it all went horribly wrong?’

She said there was not enough evidence to record a verdict of suicide or that it was an accident, adding: ‘We will never quite know what was going on in his mind on that date.’

Coroner’s officer Linda Calder told the brief inquest hearing in Chelmsford: ‘Mr Flint was found at his home address by a friend, hanging from a beam.’

She said a post-mortem examination recorded that the singer died by hanging, and a toxicology report noted the presence of cocaine, alcohol and codeine.

Ms Beasley-Murray said Flint’s family and members of Prodigy were aware of the hearing but did not wish to attend.

The hearing was held in their absence, with no witnesses called to give evidence in person. 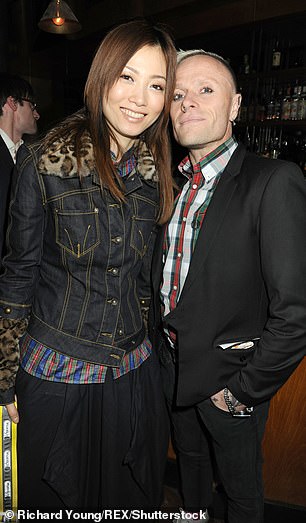 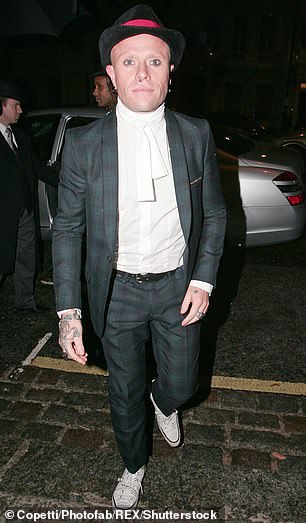 Keith Flint pictured in 2009, and with his then-girlfriend, later wife, Mayumi Kai (left) 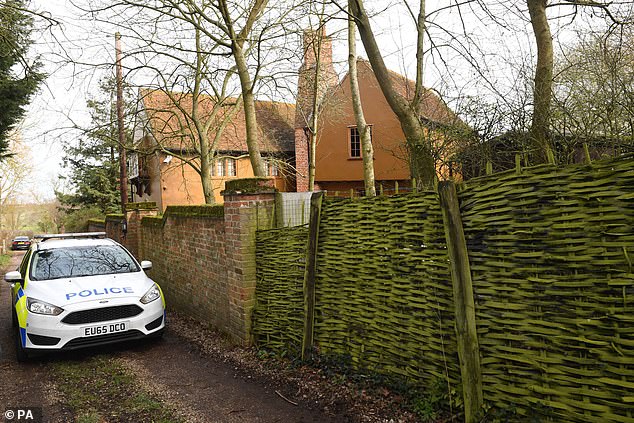 At an inquest into his death this morning at Essex Coroner’s Court was told the Firestarter star was found hanging at home (pictured, on the day his body was found) in North End, near Great Dunmow in Essex by a friend

Police attended the much-loved singer’s home and found there were no suspicious circumstances and no third party involvement, Ms Beasley-Murray said.

She told the hearing: ‘I have considered suicide, but I would have to record that finding on the balance of probability that he formed the intention and took a deliberate action knowing it would result in his death.

‘Having regard to all the circumstances I don’t find there is sufficient evidence.

‘I then have to consider an accident – was he just larking around and it all went horribly wrong? 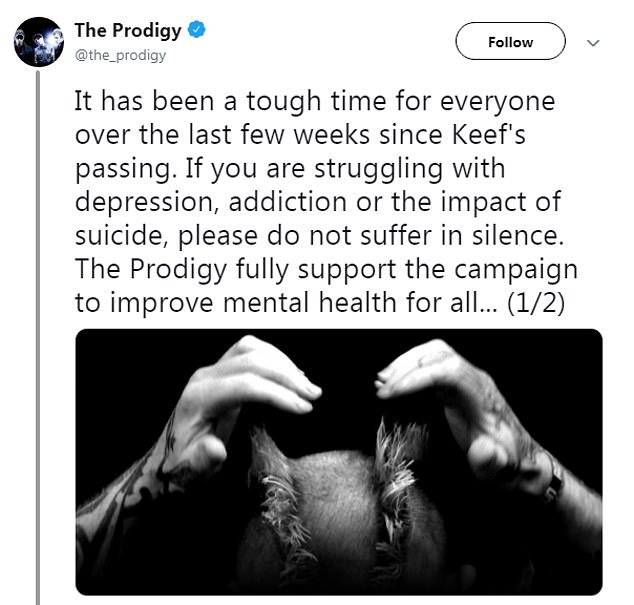 Yesterday, ahead of the inquest, The Prodigy urged Twitter followers to seek help if they are struggling with their mental health

‘But I am not going to record that because there isn’t sufficient evidence.

‘I am going to record an open conclusion.

‘We will never quite know what was going on in his mind on that date.’

Paramedics were called to the scene when his body was found, but he was pronounced dead. Police confirmed there were no suspicious circumstances.

A post-mortem carried out by a pathologist at Broomfield Hospital found the cause of death to be hanging.

Music fans travelled from as far afield as Australia to gather outside St Mary’s church in Bocking for Flint’s funeral on March 29, with festival flags flying and floral tributes piled up in the churchyard including one of the band’s ant logo. 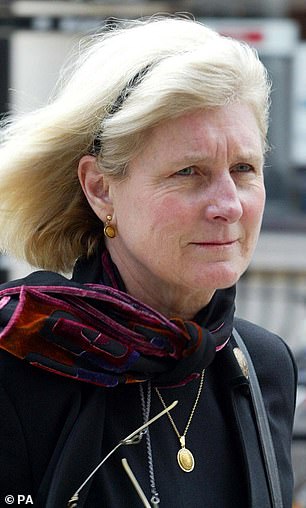 Essex Senior Coroner Caroline Beasley-Murray (pictured) recorded an open conclusion, saying: ‘Was he just larking around and it all went horribly wrong?’

Ms Beasley-Murray added: ‘He clearly was extremely popular, he was much loved by so many fans.

‘It’s been very touching to see that, and of course I’m aware of the funeral service that was held in Bocking.’

She asked the coroner’s officer to express the court’s sympathy to his family and to the band manager.

Yesterday, ahead of the inquest, The Prodigy urged Twitter followers to seek help if they are struggling with their mental health.

In a post they wrote: ‘It has been a tough time for everyone over the last few weeks since Keef’s passing.

‘If you are struggling with depression, addiction or the impact of suicide, please do not suffer in silence.

‘The Prodigy fully support the campaign to improve mental health for all.’

One of Flint’s friends who alerted the authorities to his death told MailOnline of his ‘shock’ at cocaine and codeine being found in his system.

The neighbour said that during their intimate weekly chats that Keith always spoke about clean living and how he was very keen on running as well as fitness just before he died.

The source said: ‘I’m really shocked to hear that Keith had drugs in his system.

‘That isn’t a side to Keith that I knew at all from all the time that I spent with him every week over the last few years. 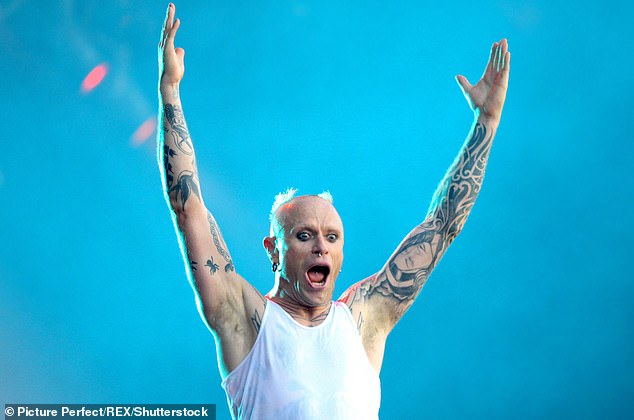 Flint performing at a festival in Moscow, Russia in 2011

‘He was upset about having to sell up his house as part of his divorce settlement.

‘But he was also getting on with his life, with a rigorous fitness schedule, he was planning a tour later in the year and he was really happy about doing Glastonbury Festival this summer.

‘I was absolutely devastated by Keith’s death at the time. But now although life goes on again just like it did before, I still stop and catch myself sometimes. I just can’t get over what’s happened and I think aloud as if I’m saying to him, “Why would you do such a thing?”‘

The friend told MailOnline how he was due to meet Keith for a day out watching a 20-mile running race in Rochford, Essex, the day before his death but he didn’t show.

The source continued: ‘He’d been really pleased about doing a personal best time in a 5k run on the Saturday, a day earlier, and we were planning a great day out watching the race on the Sunday. 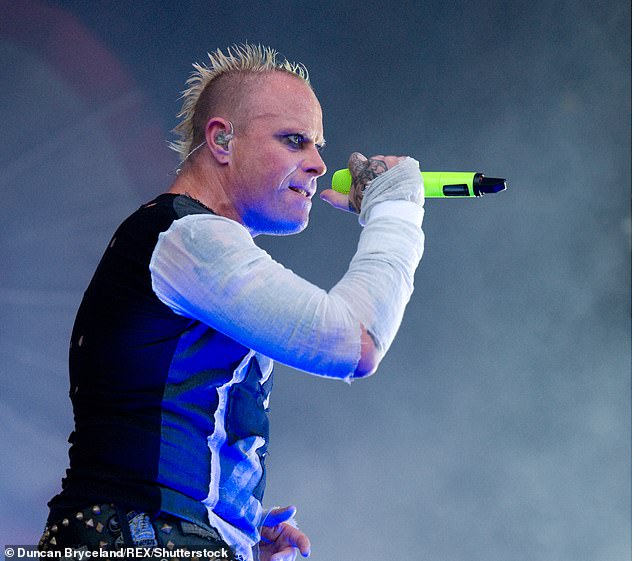 Flint, pictured in 2015 a T in the Park Festival in Perthshire, was found to have cocaine, alcohol and codeine in his system when he died

‘But when I didn’t see or hear from him that day I was concerned but not unduly worried at the time. I contacted one of the others. It wasn’t until the next morning that we were all able to find him.

‘The shock of that weekend was so upsetting. I really struggled to come to terms with it all.’

He wrote:  ‘The news is true, I can’t believe I’m saying this but our brother Keith took his own life over the weekend.

Flint was found unresponsive by medics in his marital home he shared with estranged wife Mayumi Kai.

He fought a long battle with drink, drugs and depression, however his wife previously had ‘saved him’ from his party lifestyle. 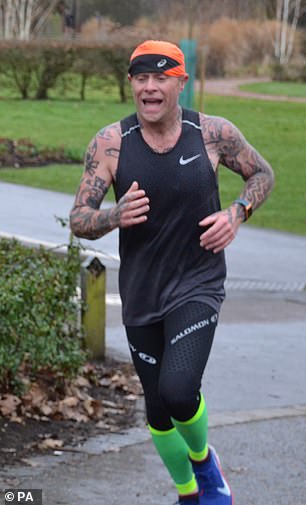 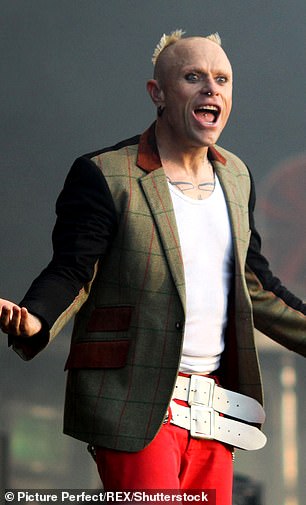 Flint taking part in a 5k run at Central Park in Chelmsford, Essex, two days before he was found dead (left) and performing at a festival in Moscow, Russia in 2011 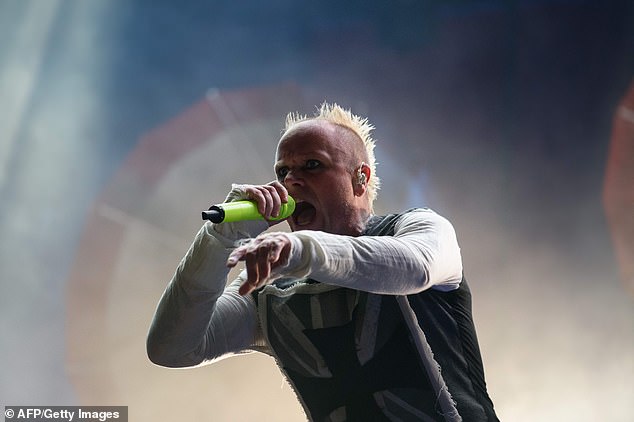 The singer was last seen in a pub in Chelmsford on March 2 buying lunch for his personal trainer.

Just hours earlier he had run a Park Run 5k and reportedly got a personal best time in.

Pictures shared with MailOnline show after the run the singer and dancer was casually dressed, eating with his personal trainer at the Galvin Green Man in Chelmsford.

He was seen joking with other diners as he bought lunch for himself and his trainer. 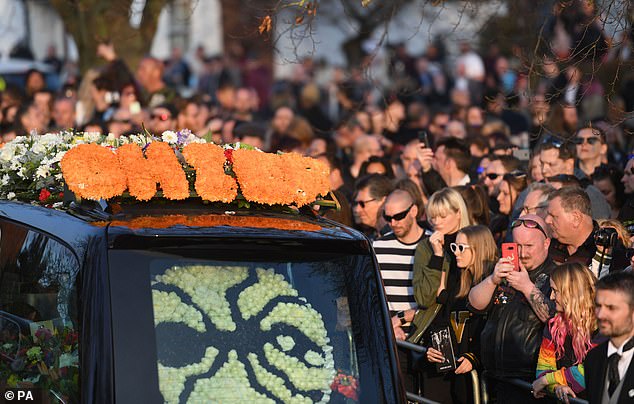 Thousands of fans lined the streets of Brocking, Essex for Flint’s funeral on March 29

Flint is understood to have delayed the sale of the couple’s country pile in Essex in hopes of winning back Miss Kai.

The 15th century farmhouse was listed for sale just days ago.

After his death it emerged he had spent up to two years dating a mother-of-three in Essex.

The star was seeing Faye Kelbie, 43, after the pair met in their local village.

At the time of his death it was reported the Firestarter hitmaker had been asking Miss Kai to come home.

However, it has now emerged he had been dating Miss Kelbie after splitting with Miss Kai, a Japanese DJ, years ago.

Miss Kelbie, who runs her own dermatology clinic and has three sons was seen crying after his death but declined to comment on their relationship. 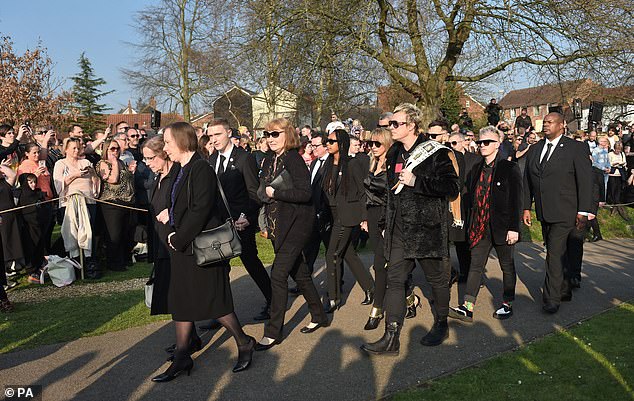 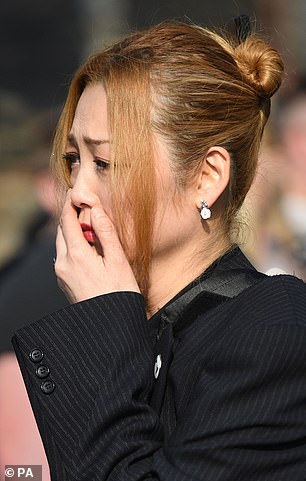 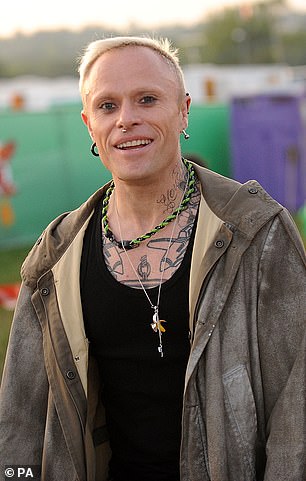 Mayumi Kai, the wife of Keith Flint, at the singer’s funeral at St Mary’s Church in Bocking, Essex

Pictures from his childhood show him sitting angelically with a neat side-parting for a school photo.

But Flint said he had an unhappy childhood and hated being at home. He added that he had ‘a dysfunctional side’, despite having a high IQ.

After leaving school, he moved to Braintree, Essex, and met Howlett in a nightclub. Flint was originally The Prodigy’s dancer but the band’s fortunes were transformed with him as vocalist and they would go on to sell 30million records.

Controversial songs such as Firestarter and Smack My B**** Up sparked public outrage but won the band millions of fans.

Flint’s much-parodied performance in the 1996 video for No 1 single Firestarter – scowling and yelling ‘I’m a firestarter, twisted firestarter’ – is said to have attracted the most viewer complaints in the history of Top Of The Pops.

The band had been due to appear at this year’s Glastonbury festival, which they had headlined in 1997, and their album No Tourists topped the charts in November.

They had recently returned from a tour of Australia and were due to appear in North and South America before making appearances at several of Europe’s summer festivals.

Flint briefly dated children’s TV presenter Gail Porter – as a couple they were dubbed ‘Beauty and the Beast’ but they split in 2000. Miss Porter tweeted one word after his death: ‘Heartbroken.’

In 2006 he married Japanese DJ Miss Kai. Flint credited her with saving him from drugs but they had separated and she was working in Japan when he died.

Neighbours said he was nothing like his wild onstage persona but a well-spoken fitness fanatic who was often seen out riding, running or cycling and was teetotal.

One said: ‘He was lovely, always very friendly and polite. He liked to ride and loved his dogs. The image you might think of him with rings in his nose was wrong. He was really nice.’

Flint bought and renovated a pub, The Leather Bottle, in the nearby village of Pleshey.

Customers were ordered to pay a £1 fine if they made a quip about Firestarter when he lit the pub’s fire. He quit the tenancy in 2017.

He was also involved with motorcycle racing as owner and manager of Team Traction Control, which won three Isle of Man TT races in 2015.

In an interview with FHM magazine in 2015, Flint said he ‘wasn’t saving up for anything’ and was ‘cashing it all now’.

In his trademark outspoken way, he added: ‘I’ve always had this thing inside me that, when I’m done, I’ll kill myself. I swear to God that’s not suicidal – it’s definitely a positive thing. The moment I start sh***ing the bed is when you’ll see me on the front of a bus.’