The Met Gala, an annual fundraiser for the Costume Institute at the Metropolitan Museum of Art is a major money maker for the museum, which relies on gifts inspired by the colorful event to survive.

The tax filings show that while the cost of the event is massive, donations surpass expenses to put the museum in the black each year.

There were contributions of just over $24 million in 2017, a number of which were a direct result of the annual gala and donors looking to get in at the Costume Institute Gala, which is famously held on the first Monday of May.

With all contributions and events factored in, the museum made a net surplus of $18.5 million in 2017, the most recent year for which tax information is available.

A table for the evening runs upwards of $300,000 and there are also sponsorship opportunities for brands. 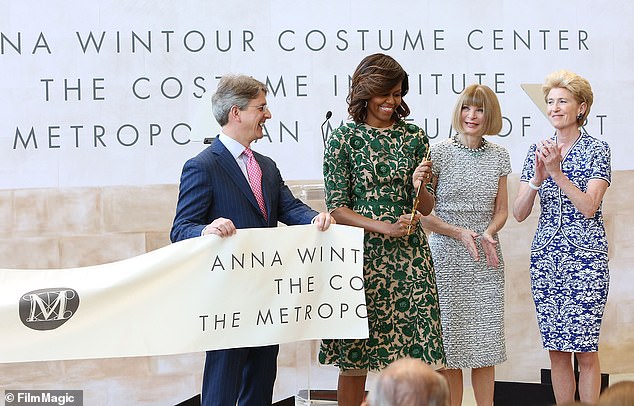 Bump: There is a steady flow of contributions from deep-pocketed donors who want to attend or be part of the annual event

This year Gucci sponsored, as did Conde Nast.

Individual tickets can be bought as well but those are few and far between, and cost $35,000, with all the money raised going to the Costume Institute.

That arm of the Metropolitan Museum has always had to fund itself, despite drawing record crowds every summer.

It got a nice boost earlier this year thanks to Wendy Yu, a wealthy Chinese entrepreneur who funded a curatorial position.

A big payoff for her and others who donate is being able to attend the annual gala and get to rub shoulders with Anna Wintour, which means that as long as the money keeps coming the gala will go on.

Wintour has also made out nicely as a result of her work, and in 2014 the Anna Wintour Costume Center was opened in her name with Michelle Obama on hand to cut the ribbon.

The Vogue editrix is also now on the board of the Met, a vaunted position in the art world.

There are rumors she may soon step down from Vogue, but likely not the Costume Institute.

It was after all headed up for years by one of her predecessors, Diana Vreeland, who sought something to do in retirement after she was fired from Vogue.

It did not become a moneymaker however until Wintour took over, and assembled a cesspool of carousing celebrities in their chignon and chemise to pay tribute to camp or China on the first Monday of May.