Notorious hate preacher Anjem Choudary has returned to his family home amid fears he will again pose a threat to national security.

Choudary is understood to have returned to his home in east under licence in the past fort-night after spending the last six months in a bail hostel under close supervision following his release from prison.

The 52-year-old dressed in white robes was pictured smiling by The Daily Telegraph when he was out shopping to buy sweets and top up an electricity pre-payment card. 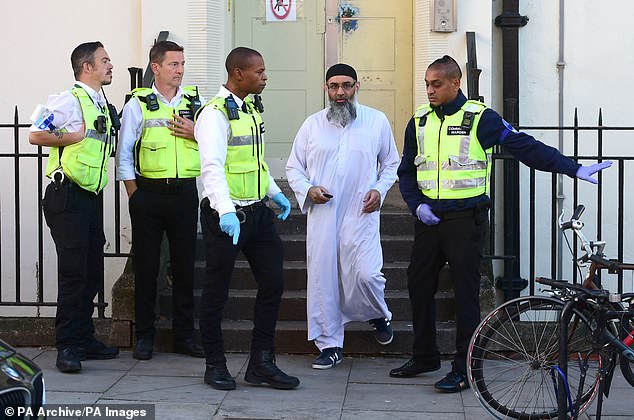 Anjem Choudary leaves a bail hostel in north London after his release from Belmarsh Prison last year. The hate preacher was recently allowed to leave the hostel and return to his family home in London

He said to the newspaper: ‘It’s a lovely day’, but declined to answer any questions.

He will have to submit his receipts to the authorities after his assets were frozen under United Nations sanctions.

The father of five spent three years of a five-and-a-half year sentence in prison after he was detained in 2016 under terror laws for his encouragement to Muslims to join Isis.

Choudary led extremist group al-Muhajiroun was outlawed by the Government following the 2005 7/7 attacks on London but it has continued to operate under a number of different images.

The release of Choudary and other offenders poses a renewed threat to national security with the worry that it may fuel young impressionable Muslims.

While security services are assured Choudary’s extremist activities have decreased it is understood that they’ve noticed increased activity among some of his followers, according to The Daily Telegraph. 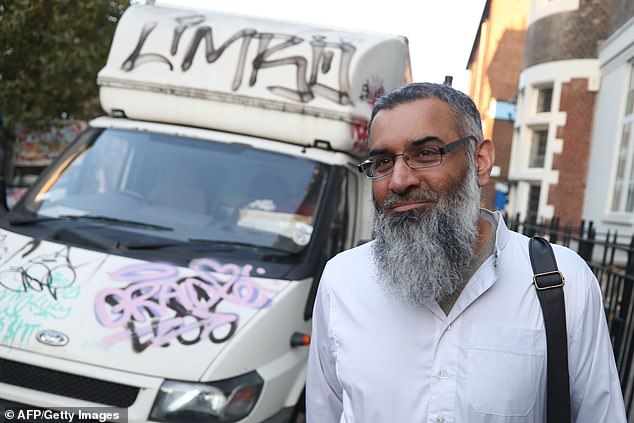 Choudary is seen leaving a probation hostel in London on October 19, 2018 following his release from prison

A well-placed source told the newspaper: ‘The group remains a threat to national security but the dis-ruptions have been very effective. Choudary is now out and back at home. He is somebody who pre-ferred to stay in the comfort of his home in London and encourage others to go and fight. He is a cow-ard, his are not the actions of a warrior.’

A Ministry of Justice spokesman declined to comment on his move back to the family home.

The spokesman added: ‘Public protection is our overriding priority when deciding whether an offender should be allowed to relocate from an approved premises. This would only be permitted following a robust risk assessment and they remain subject to close monitoring and strict licence conditions which, if breached, can see them go back to jail.’