is set to offer Labour a three-pronged deal in a bid to break the deadlock at Westminster, it has been claimed.

The PM’s negotiating team will reportedly give ground to on customs, goods and workers’ rights.

Conservatives were warned they will have to ‘suck up concessions’ after Mrs May acknowledged there was ‘no sign’ of her MPs uniting behind her deal.

She is hoping to persuade the Labour benches to back her instead with cross-party talks expected to resume this week. 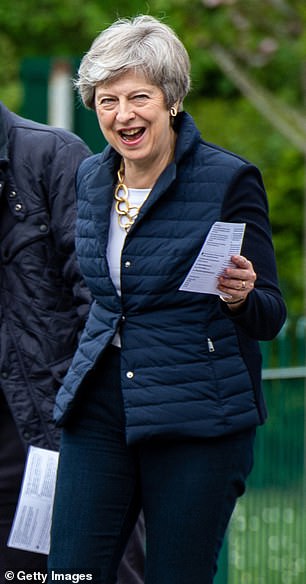 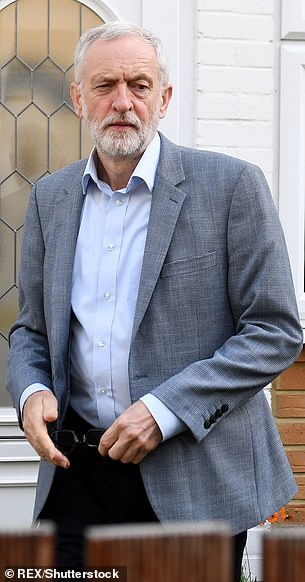 The  reported that the first of three concessions would be a ‘comprehensive but temporary’ customs union with Brussels.

The proposed deal would last until the next general election, which is currently scheduled for 2022.

Mr Corbyn favours a permanent customs arrangement but many Tory MPs are furiously opposed, saying it would prevent Britain from striking trade deals.

In a second concession, Tory negotiators could agree to align the UK with single market rules on a wider range of goods.

And in a third gamble, the PM may promise to ‘enshrine in law’ that UK workers’ rights after Brexit will mirror those which currently apply in the EU.

Labour has vowed that it will ‘never accept the weakening of workers’ rights’ as a result of Brexit.

The concessions are likely to spark fury from Conservative backbenchers already opposed to the talks with Labour.

Brexiteer Steve Baker retweeted a comment saying the plan was a ‘Tory Brexit delivered by Labour that neither Leavers nor Remainers support’. 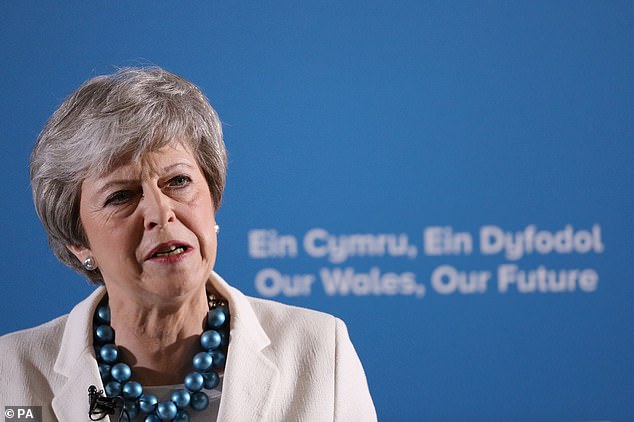 The PM is on the back foot once again this week after her party suffered its worst local election results since the height of Tony Blair’s powers in 1995.

However the PM yesterday urged MPs that they ‘have to find a way to break the deadlock’.

Gove and The Saj play their leadership cards 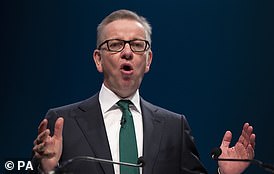 Two leading contenders to replace Theresa May made major pitches for the keys to No 10 yesterday as the battle for the Tory leadership intensified.

Environment Secretary Michael Gove gave an emotionally charged address to the Scottish Conservatives in Aberdeen, where he was raised by adoptive parents.

In a well-received speech in which he gave his clearest hint yet that he is preparing to run to be Prime Minister, Mr Gove set out a vision of how he would lead the country based on the values taught to him by his mother and father.

He said his parents’ values included: ‘A belief that business is a force for good. A faith in education as a good in itself. A compassion for those less fortunate, which leads to action not just words. A big heart that they don’t want to wear on their sleeve. A willingness to take risks and believe the best in others. A basic sense of justice, combined with a readiness to forgive.’

He later refused to rule out running in the looming contest when asked by The Mail on Sunday.

Meanwhile, Home Secretary Sajid Javid also used his life story to set out his stall. In a clear pitch to the Left of the party and Labour voters, he spoke at the Welsh Conservative Party conference about how the state had helped him rise up from being a working class child in Rochdale to a City high-flyer.

Straying way beyond his Home Affairs brief, he said: ‘Health, education, work and pensions. For many in Westminster, these are the names of departments to be managed. But for my family growing up, they were our lifelines, and ultimately the ladder to my success.’

Referring to his brothers, he added: ‘They’re one reason that my parents, themselves raised by dollar-a-day farmers in rural Pakistan, could go on to raise a chief superintendent, an entrepreneur, a finance professional and a Cabinet Minister.’

Writing in the Mail on Sunday, she said: ‘The talks with Labour so far have been serious.

‘I could not persuade enough of my colleagues to vote for the Withdrawal Agreement and, regrettably, I have to accept there is no sign of that position changing.

‘We don’t agree with the Opposition on lots of policy issues, but on Brexit there are areas we do agree on – leaving with a good deal that protects jobs and our security and ends free movement.

‘To the Leader of the Opposition, I say this: let’s listen to what the voters said in the local elections and put our differences aside for a moment. Let’s do a deal.’

Tory negotiators have told Labour that the Government could accept UK membership of a customs union – a red line for Brexiteers.

However they have said it must be called something else to avoid inflaming party anger. One source said: ‘It must look like a duck and quack like a duck, but it doesn’t have to be called a duck.’

‘We said in our manifesto two years ago that we accepted the referendum result and that we believe the correct way to bring this desperately divided country back together is an arrangement where we’d have a permanent customs union deal.

‘Although the government are trying to dress up their customs union offer, they haven’t really shifted.

‘My concern is, if we have a trade deal with the US for example, that could mean Trump’s America and big private healthcare corporations getting their hands on NHS contracts.

‘I’m not prepared to countenance that. It’s why we need instead a permanent and comprehensive customs union arrangement where we do our trade deals as part of the EU.’

He said: ‘The idea we would leave the EU but have the EU decide all our future trading arrangements, decide what our tariffs are – basically, that’s the most ridiculous position to be in.

”The election result was so devastating that the Prime Minister now has to consider herself a caretaker PM.

‘She must now move fast to resolve this matter of leadership urgently because everywhere you went, the element of trust in the PM had completely broken down.

‘The idea that she is now able to do a deal with an equally discredited Labour Party is ridiculous.’

My Message to Jeremy Corbyn: Let’s do a deal

By Prime Minister Theresa May

In the local elections, many Conservative councillors lost their seats. I want to thank all of my colleagues for their tremendous hard work and dedication to public duty, and for all they did to improve the lives of the communities which they served.

I have been a councillor and I know what a rewarding and important job it is.

They did not deserve what happened and I am sorry.

It is clear that the voters delivered their judgment in large part based on what is happening – or not happening – at Westminster. And, as Prime Minister, I fully accept my share of the responsibility for that.

The voters expect us to deliver on the result of the referendum and, so far, Parliament has rejected the deal which I have put forward.

The March 29 exit date has been delayed, the public is frustrated – and I fully understand why.

Three years have passed now since the historic 2016 vote and people really do just want us to get on with it.

But the electorate delivered a message on Brexit to Labour, too. Labour also lost seats and councils which it has held for decades.

Clearly, the public is fed up with the failure of both of the two main parties to find a way to honour the result of the referendum, take the United Kingdom out of the European Union and to bring our country back together again.

There is no use trying to escape the facts, however uncomfortable they may be. I have tried, tried and tried again to deliver Brexit with the votes of Conservative MPs and our confidence and supply partners, the DUP.

I negotiated with the EU what I believe is a very good deal for the UK – a deal which allows us to genuinely take back control of our money and our laws.

The free movement of people will end – giving us control of our own borders for the first time in decades. However, I could not persuade enough of my colleagues to vote for the Withdrawal Agreement and, regrettably, I have to accept there is no sign of that position changing.

Meanwhile, the series of indicative votes which MPs held did not deliver any path forwards. Parliament said what it didn’t want – but not what it was prepared to vote for.

Pictured: Theresa May arrives to cast her vote at a polling station

Since then, the Government has been in talks with the Opposition to try to find a unified, cross-party position. I understand many of my colleagues find this decision uncomfortable. Frankly, it is not what I wanted, either.

But, as elected politicians, who asked the public to give us an instruction on whether to leave the EU, we cannot now shrug our shoulders and say it’s all too difficult.

We have to find a way to break the deadlock – and I believe the results of the local elections give fresh urgency to this.

The talks with Labour so far have been serious. We don’t agree with the Opposition on lots of policy issues, but on Brexit there are areas we do agree on – leaving with a good deal that protects jobs and our security and ends free movement.

But there are also differences on precisely what the UK’s future relationship with the EU should look like, so reaching an agreement will require compromise from both sides.

We will keep negotiating, with more formal talks due to take place on Tuesday, and keep trying to find a way through.

Because the real thing that matters now is delivering Brexit and moving on to all the other issues people care about. The longer that takes, the greater the risk we will not leave at all. We need to get out of the EU and get a deal over the line.

To MPs, I would say this: if we are able to negotiate a cross-party agreement, this deal will be a stepping stone to a brighter future, outside the EU, where the UK can determine the road ahead.

This is because no parliament can bind its successor.

The key point is, the ultimate decision-maker in everything we do is Parliament. So future parliaments, with a different party balance, will be able to decide whether they want a closer or more distant relationship with the EU.

I do sincerely believe that – more than 34 long months on from the referendum – what people want is for their politicians to come together in the national interest and get Brexit over the line.

And to the Leader of the Opposition, I say this: let’s listen to what the voters said in the local elections and put our differences aside for a moment. Let’s do a deal.