Brunei has said it will not enforce the death penalty for gay sex following a global backlash led by celebrities such as Elton John and George Clooney.

Sultan Hassanal Bolkiah has reacted to the outcry which was sparked when he rolled out an interpretation of sharia law on April 3 to punish sodomy, adultery and rape with death.

The small South East Asian country had consistently defended its right to implement the laws – elements of which were first adopted in 2014 and was being rolled out in phases. 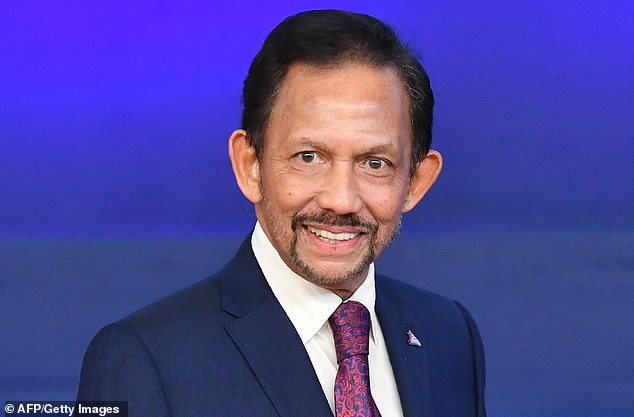 Just last week, the country sent a letter to the European Parliament to urge politicians in Europe to show ‘tolerance and understanding’ towards its decision to bring in the punishment.

The UN had previously condemned the laws as ‘cruel and inhuman’.

But in a rare response to criticism, the sultan said the punishment would not be imposed in the implementation of the Syariah Penal Code Order (SPCO).

In a speech ahead of the start of the Islamic holy month of Ramadan, the sultan said: ‘I am aware that there are many questions and misperceptions with regard to the implementation of the SPCO.

‘However, we believe that once these have been cleared, the merit of the law will be evident.’

‘As evident for more than two decades, we have practised a de facto moratorium on the execution of death penalty for cases under the common law.

‘This will also be applied to cases under the SPCO which provides a wider scope for remission.’

Crimes including premeditated murder and drug trafficking already carry the death penalty but none have been carried out since the 1990s.

The vastly wealthy sultan, who once piloted his own 747 airliner to meet former US president Barack Obama, often faces criticism from activists who view his absolute monarchy as despotic.

In a rare move today, the sultan’s office released an official English translation of his speech.

‘Both the common law and the Syariah law aim to ensure peace and harmony of the country.’

He added: ‘They are also crucial in protecting the morality and decency of the country as well as the privacy of individuals.’

The law’s implementation prompted celebrities and rights groups to seek a boycott on hotels owned by the sultan, including the Dorchester in London and the Beverley Hills Hotel in Los Angeles.

The Dorchester had been the focus of UK-based protests since the law was announced last month. 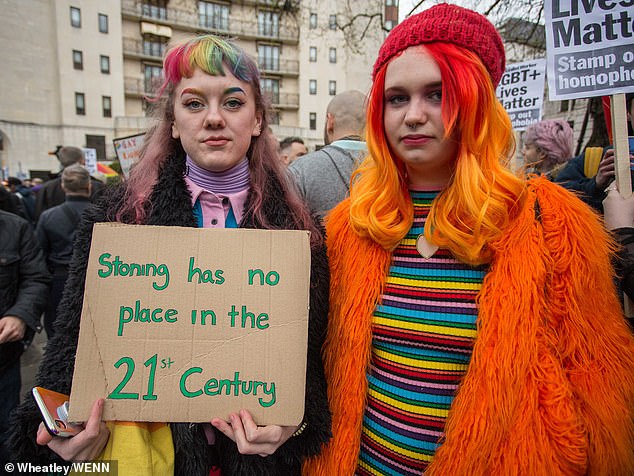 Two protesters outside the hotel wear colourful clothes and hair and hold a sign which reads: ‘Stoning has no place in the 21st Century’ 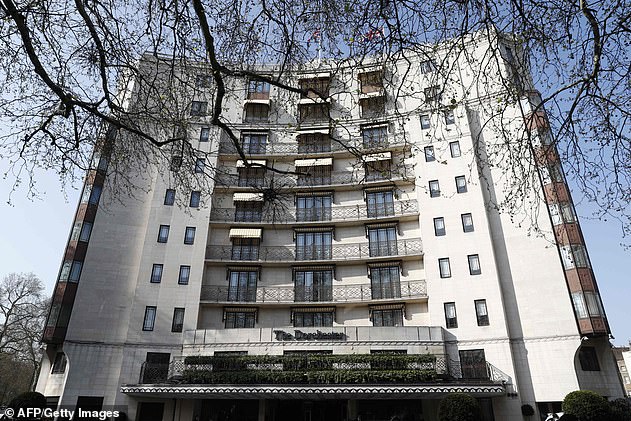 The calls come after a celebrity-inspired campaign demanded a boycott of the ruler’s hotel empire, which includes the Dorchester in London, above (file image)

LGBT protesters broke through a barricade outside the hotel as they rallied against the sultan on April 6.

Around 500 people turned out to take part in the protest in Park Lane, central .

The gathering, led by human rights activist Peter Tatchell, saw many of the protesters carrying placards and banners calling for homophobia to be stamped out, as well as rainbow flags.

George Clooney, Sir Elton John and the American comedienne Ellen DeGeneres are among celebrities who announced they would no longer stay at any of the hotels in the Sultan’s collection. 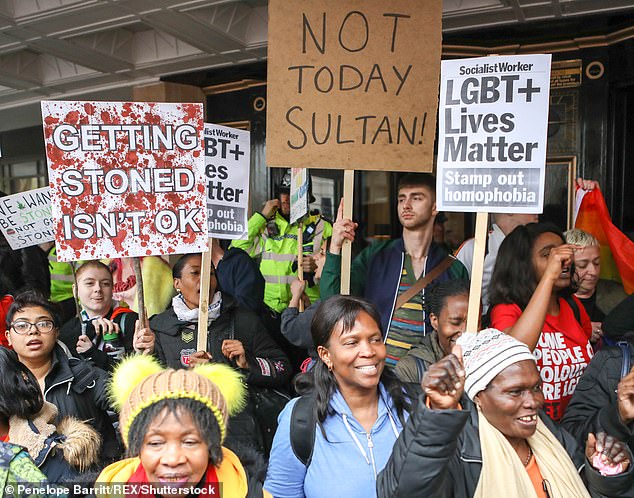 Roughly translated Sharia means ‘the way’, and is a set of rules interpreted from Islamic religious texts governing how Muslims live their lives.

It is divided into four sections, one of which deals with criminal punishment, with the rest dealing with family matters, prayer, and business dealings.

The criminal section is the one most commonly associated with Sharia, and contains punishments such as removing of hands from thieves and the death penalty for homosexuals.

Sharia criminal law is highly controversial throughout the Muslim world, and is hotly debated among politicians, religious leaders, and scholars.

As a result of this debate, most Muslim nations do not enforce these laws, instead relying on aspects of British or French law which were imported during the colonial period.

Trend for 'facelift brows' is anti-ageing hack for 2019
Thousands of families left without running water after major pipeline burst in Hampton, London
Mysterious 300-million-year-old 'Tully monster' may not be the creature scientists thought it was
Social media roasts Trump after he reveals Space Force logo looks a lot like Star Trek badge
Desperate residents of coronavirus hotspot Wuhan describe 'doomsday' scenes
Family of Sean Ford, 15, pays tribute to 'outgoing and intelligent' boy who was stabbed
Two Americans and a Briton are killed in rocket attack by Iran-backed fighters on base in Iraq
SIX members of Trump's campaign team setting up for his Tulsa rally test positive for COVID-19