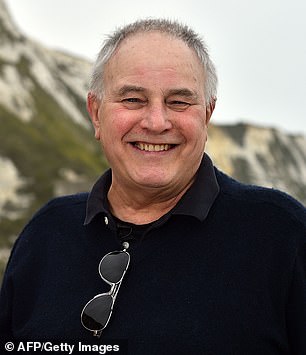 A quarter-century after the Channel Tunnel opened, the British miner who punched through to the French side and was a poster boy for the continental connection is now a supporter.

In an interview ahead of Monday’s 25th anniversary, Graham Fagg said he still marvels at one of humankind’s ‘greatest achievements’ but admitted he has soured on closer relations with mainland Europe.

‘I worked on the Channel Tunnel and did the breakthrough, but I actually voted for Brexit,’ the 70-year-old told AFP. ‘I don’t see that as incompatible.’

The retiree made history in December 1990, greeting French counterpart Philippe Cozette about 100 metres (109 yards) under the sea after they connected their respective sides of the tunnel.

Less than four years later, on May 6, 1994, Queen Elizabeth II and French president Francois Mitterrand cut the ribbon on the new rail link. 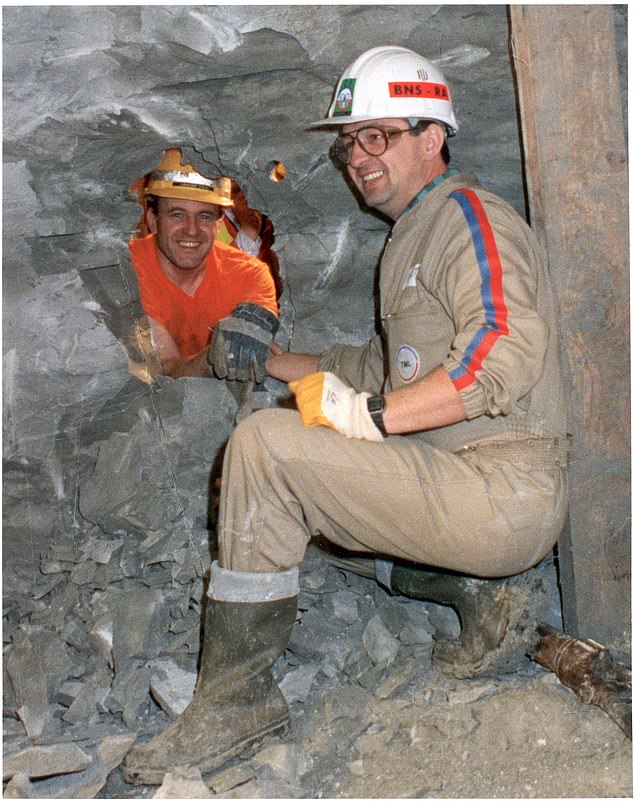 It has since welcomed 430 million passengers and 86 million vehicles and, for some Britons, come to symbolise the country’s integration with the continent as a member of the European Union.

Fagg said he supported joining the European Economic Community – the forerunner to the EU – in a 1975 referendum, but had not envisaged it would become a political union.

‘We voted for a trade deal,’ he explained. ‘I can’t remember anybody ever saying to me, ‘we’re going to turn it into a federal Europe. We’re going to set all the rules and you’ve got to obey them’.’ 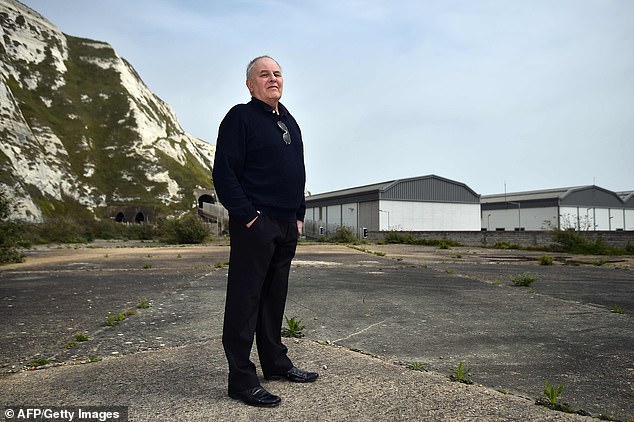 Former TBM (Tunnel Bore Machine) Operator, Graham Fagg poses for a photograph next to the cooling facility for the Channel Tunnel at Samphire Hoe just outside Dover on the south coast of England on May 1, 2019 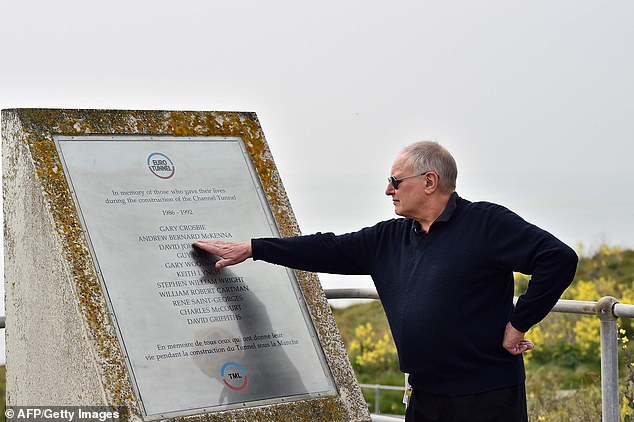 Former TBM (Tunnel Bore Machine) Operator, Graham Fagg looks at a memorial to workers who died in the construction of the Channel Tunnel at Samphire Hoe just outside Dover on the south coast of England on May 1, 2019

A lifelong resident of the southeast English port town Dover, where 62 percent of people backed Brexit in the 2016 referendum, Fagg insisted he wants close future ties with Europe.

The grandfather-of-four has forged an enduring friendship with Cozette, visiting the Frenchman’s home near Calais on several occasions.

‘I don’t really speak English and he doesn’t speak French at all, but still we understand each other,’ Cozette told AFP this week. 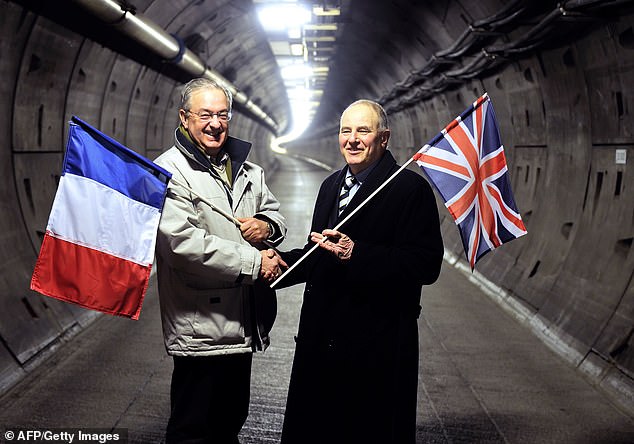 The former miners of the Channel Tunnel – France’s Philippe Cozette (left) and Britain’s Graham Fagg, who dug the last meters of the Eurotunnel and met in a maintenance tunnel in 2014

‘I don’t think it will drive the English and French apart,’ he said.

In footage of their historic first meeting, the pair clasp hands through a small gap in the tunnel to cheers from workers and officials looking on, before posing for pictures.

Fagg remembered ‘it was all a little bit overwhelming’ and being most concerned about not hitting Cozette with his digging tool before they had broken through.

After stepping into the French side, the Englishman was greeted by an array of cameras and remembered being impressed by the typically Gallic fare on offer to celebrate the occasion.

‘They had champagne, wine, food,’ he said. ‘On our side we had just tea, coffee and water – and maybe a sandwich if you were lucky!’ 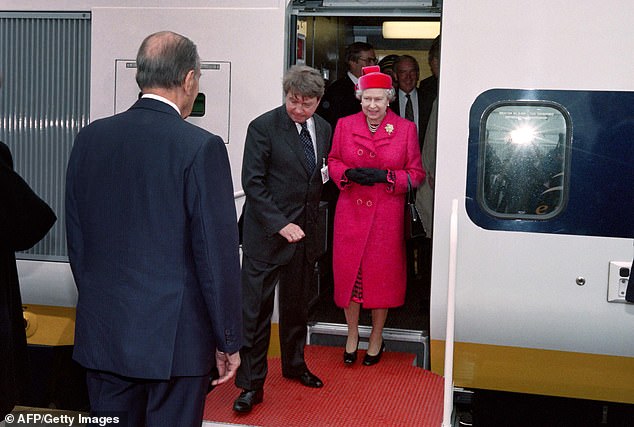 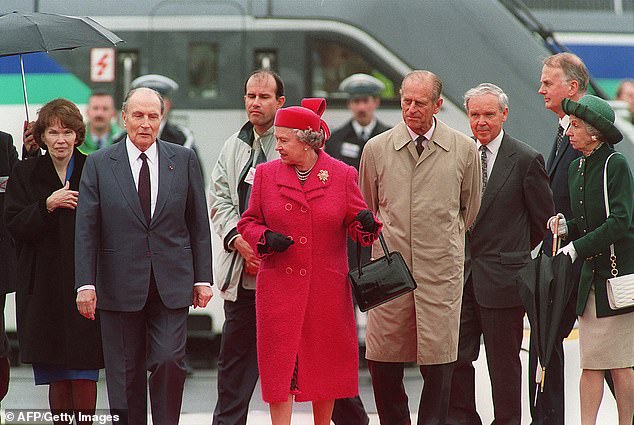 ‘I had other plans’

Fagg dedicated five years of his life to the tunnel’s construction between 1986 and 1991 and then worked in maintenance for Eurotunnel for nearly 15 years from the early 2000s.

He recalled a tough working environment amongst the heavy-drinking British miners, who were in a race to reach the middle of the tunnel before their French counterparts and were paid on a bonus scheme.

‘The faster we went, the more money we got,’ he said.

The moment that would ultimately become a recurrent landmark in Fagg’s life was purely down to chance, with his name chosen randomly by bosses.

‘I thought I was going up to the office to get told off about something, but in actual fact they said ‘tomorrow you’re doing the breakthrough’,’ he added.

‘I was a bit surprised because it was my day off and I had other plans.’ 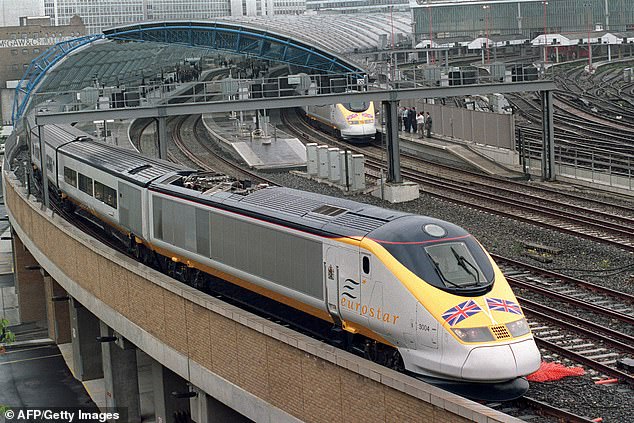 One of the biggest engineering projects ever undertaken in Europe, building the tunnel involved more than 12,000 workers.

Today, it remains the longest undersea tunnel in the world at nearly 38 kilometres (24 miles) and has been named one of the seven wonders of the modern world.

Fagg is most pleased that after years of financial problems it is now a viable business.

‘It’s a great engineering feat,’ he said. ‘It’s good that people enjoy it.’

Fagg, who has been married nearly 50 years, survived a prostate cancer diagnosis six years ago which led to his retirement.

He admitted feeling nostalgic Wednesday revisiting the spot where tunnelling first started, stopping at a plaque overlooking the Channel honouring the 10 workers who died during the project.

‘It was a historical moment,’ he recollected of his famous handshake.

‘The whole project was a historical moment. It involved five years of my life, so it’s going to remain with you.’

How Battle of Britain hero sent postcard from Nazi PoW camp to tell wife he was alive
How stylist, 19, went from a student with poor eyesight to an industry icon worth £6million
Donald Trump´s UK visit cost £14.2m in policing,...
Taylor Swift makes a rare appearance with beau Joe Alwyn and brave wet weather to enjoy date night
One-in-seven teenagers abuse prescription drugs to help get them through their GCSEs, study reveals
STEPHEN GLOVER: If every politician who tells a whopper was taken to court
Driving Ireland's Wild Atlantic Way plus 10 amazing road trips from Route 66 to the Amalfi Coast
Coronavirus UK: A FIFTH have bent lockdown rules