An emotional husband reveals how his wife suffered a near-fatal health scare as they were building their dream home in Grand Designs: The Street.

In tonight’s episode of the channel 4 show, Garrie and Sue, 57, hope that the self-build project near Bicester, Oxfordshire, will transform their lives with a house suitable for her needs.

But while in the final push to build their dream home, she contracts a severe case of pneumonia and Garrie admits that his wife was just 15-30 minutes away from death. 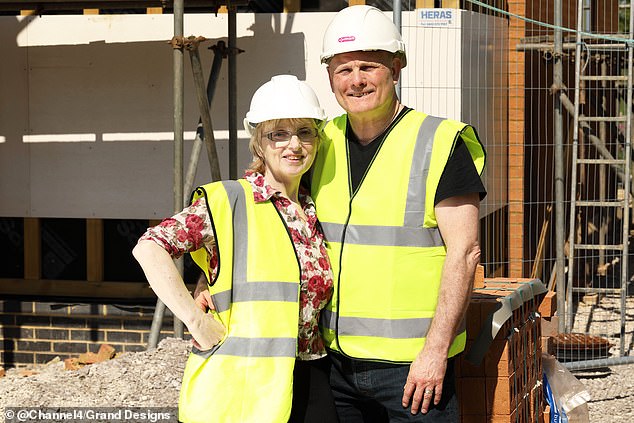 Garrie and Sue, both 57, dream of building a house that can accommodate her disability and will allow them to grow old together. The couple will feature in tonight’s episode of Grand Designs: The Street 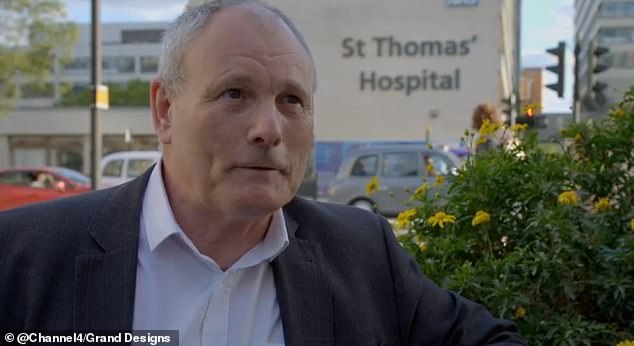 The programme follows ten amateur self-builders as they attempt to construct their dream houses on a street in Oxfordshire – but when it’s Garrie and Sue’s turn, they spend almost £100,000 more than their budget.

Because the pair, who married only weeks before filming started, can’t buy a home suitable for Sue’s disability, Garrie embarks on a lifelong dream to build her one.

Sue is unable to move up and downstairs, and has limited mobility. So in 2017, the couple set out to build a four-bedroom ‘glass house’ featuring huge windows to maximise the couple’s sun exposure.

For Sue, getting as much vitamin D as possible is essential to help her bones stay as strong as they can. 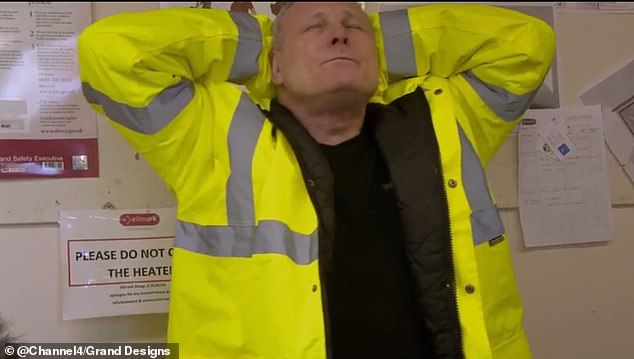 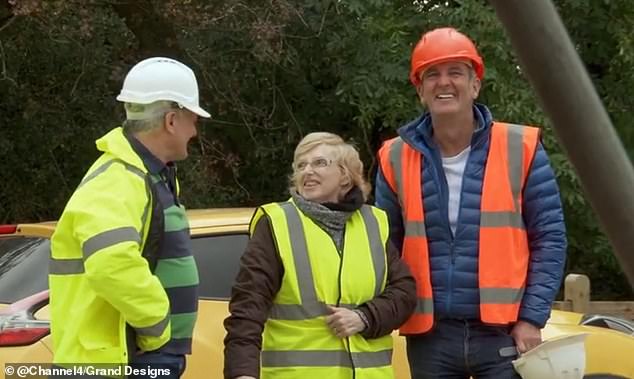 The couple set out on the self-build project in September 2017, and are inspired to build themselves a home with facilities to help Sue’s quality of life

It’s an ambitious project, as it’s the largest house on the ‘self-build’ street, and is designed to include a range of gadgets such as a lift in order to help Sue’s quality of life.

However, just when the house is looking like it is near completion, the couple are struck by a stressful health worry.

While stood outside St Thomas Hospital in London, Garrie explains that his wife, who is now in intensive care, ‘woke up and wasn’t able to move. She’d gone temporarily blind.’

He adds: ‘Sue had a severe case of pneumonia and was probably 15 to 30 minutes from passing away.’ 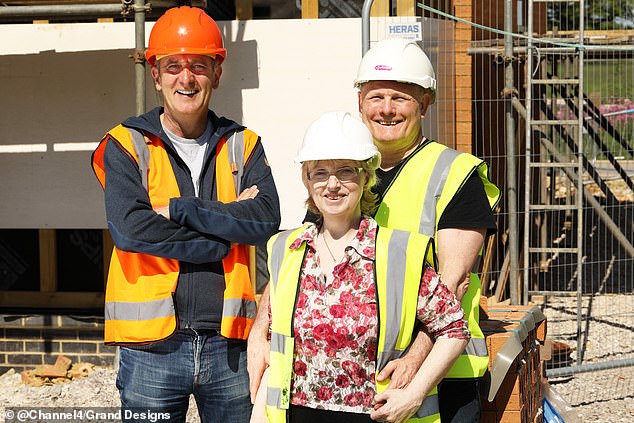 The couple spend almost £535K on building their dream home, revealing that they went way over budget 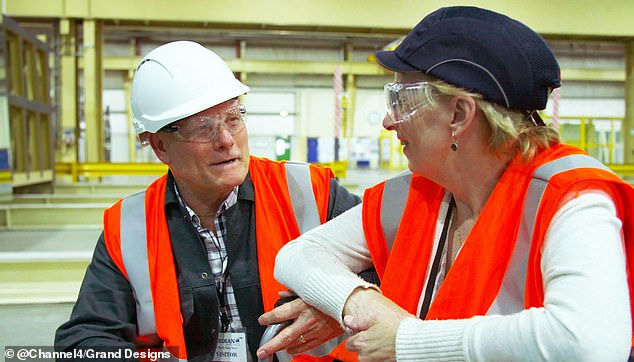 Garrie is devastated when Sue contracts pneumonia during the build, and admits his wife was just ’15-30 minutes away from death’ 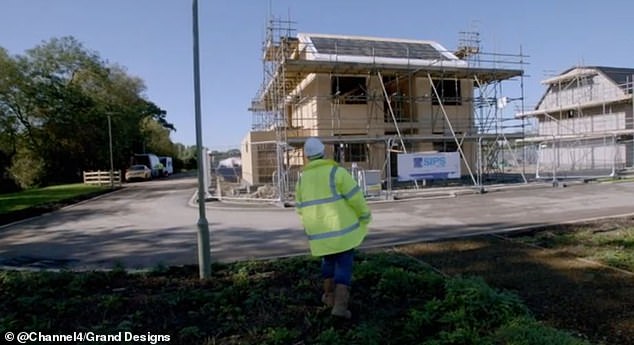 The couple use structurally insulated panels for their house, pictured, and it quickly begins to take shape

Before Sue’s health crisis everything appears to be going to plan and the couple are on top of their high-tech build.

The first floor will feature a master bedroom with a spa while the top floor will be dedicated to the living room so they can make the most out of the countryside views.

They decide to use structurally insulated panels (SIBS) for their build to help create a three-storey home.

The panels are cut in a factory to a precise size and are easy to assemble, meaning that Garrie and Sue’s home makes significant progress in little time. 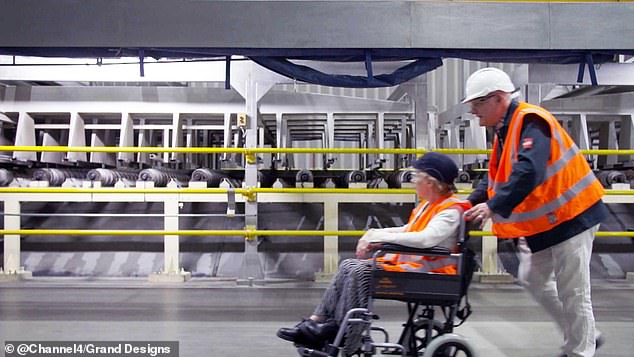 Unable to find a home suitable for Sue’s complex health needs, the couple set about building their own. They are pictured visiting the factory where their windows are made 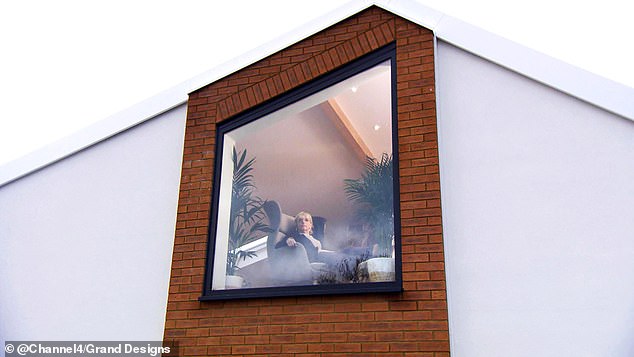 The couple are overjoyed with the result of the build, which sees them in a ‘glass house’ with plenty of large windows to allow sunlight 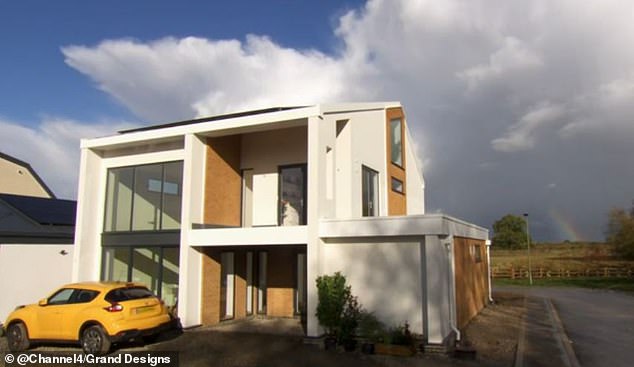 Although going over budget, the couple are happy with their home which has large windows (pictured)

After the first walls are put up, the couple appear overwhelmed at the speed and declare the sheer size of their build ‘daunting.’

However, they are desperate to move into the house and when 2.5 tonnes of roof is lifted, craned into position and secured in minutes, the build really starts to take shape.

Garrie says he ‘feels absolutely brilliant’ even though he has hundreds of decisions still to make and very little building experience.

During a meeting with his project manager half-way through the build, Garrie reveals he believes it will cost around £60,000 more than he expected.

He says: ‘We’re not experts at this, it could be a whole heap of c**p and it’s because I haven’t got a clue.’ 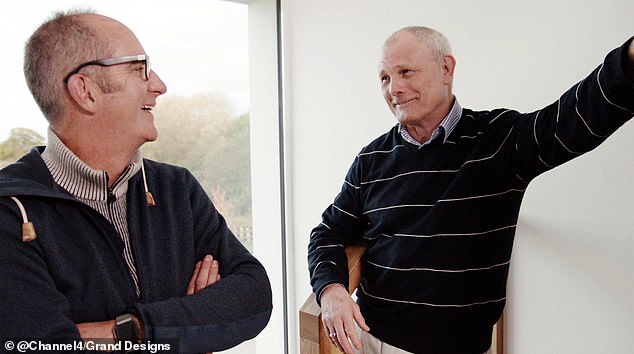 Garrie, right, reveals that he might have to dip into his pension to cover the costs of the build, but that he and Sue will be mortgage-free 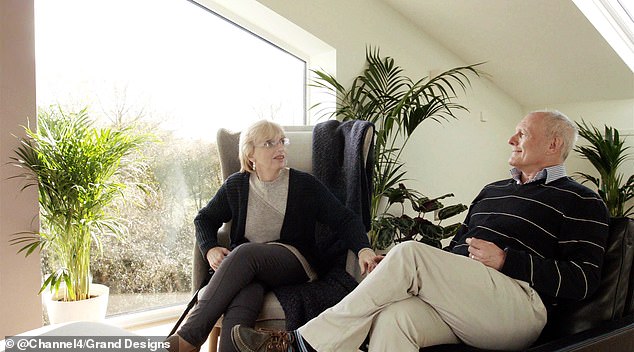 The couple are overjoyed with their home, which is built to help Sue live as freely as possible. It features huge glass windows to maximise their exposure to sunlight 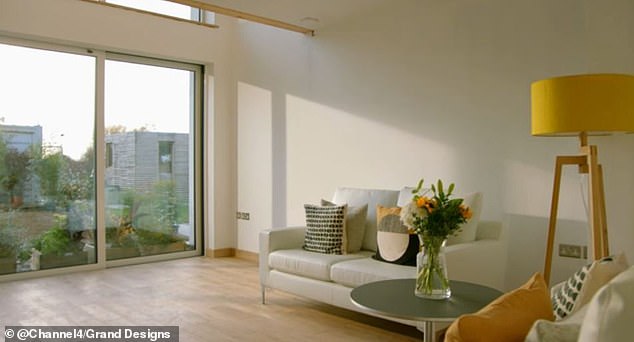 The huge windows in the three-storey home cost £28,000 but ensure Sue will get lots of sunlight. Pictured: the living room

But there’s one element that Garrie and Sue refuse to compromise on – and that’s the glass part of their design.

They need nearly 800 metres-worth of continuous glass to create their desired effect, which sets them back a whopping £28,000.

Osteoporosis is a condition that weakens bones, making them fragile and more likely to break.

It develops slowly over several years and is often only diagnosed when a minor fall or sudden impact causes a bone fracture.

The most common injuries in people with osteoporosis are:

However, they can also occur in other bones, such as in the arm or pelvis.

Sometimes a cough or sneeze can cause a rib fracture or the partial collapse of one of the bones of the spine.

However, it can also sometimes affect men, younger women and children.

The bespoke lift is another big spend at £18, 000, but is essential as it will ensure Sue’s freedom across all levels of the house.

The couple also splash out on 60 metres of pipe work to have a state of the art ventilation system, which costs around £20,000.

Another problem the couple encounters is the front door frame, which they realise is too high, meaning they won’t easily get a wheelchair across the threshold.

The problem is eventually dealt with and Sue’s nephew Joe Hurn comes to help out to make sure the building is perfect.

He explains: ‘Sue’s my aunt and I want to make sure she’s completely independent, whatever condition she’s in.’

Despite health troubles, Sue makes a recovery and the home is completed by the end of the show.

The final building is bright and elegant with the glass windows flooding the home with daylight.

‘There has been times over the last few years when I’ve been convinced I’d never get here but now it seems to be a lot better,’ explains Sue. ‘I feel better here.’

While Garrie adds: ‘It is remarkable. Sue is lifted and we’re convinced this house will be beneficial to us.’

However, the proud new homeowner who is delighted with his house, does admit that they went over-budget, and he thinks it will cost £535,000 by the time the finishing touches are added.

‘I might have to draw out from my pension, however we are mortgage free,’ says Garrie.

‘There are parts of the build that have aged me and others that invigorated me but overall it has been more than a success.’

McClean slams FA for investigation into social media post slating Stoke fans for poppy criticism
Utah teacher kills her ex-husband's girlfriend in front of her daughters
Margot Robbie and Saoirse Ronan wow at the European premiere of Mary Queen of Scots in London
Cambridge Dictionary reveals its word of the year: Nomophobia
YouTube 19-year-old male beauty blogger James Charles and how he got famous
'As they wheeled me to surgery, I took a final look at my right foot'
Helena Christensen breaks her silence on the row on styles are appropriate for a 50-year-old woman
Council probe over Dominic Cummings' family home in Durham