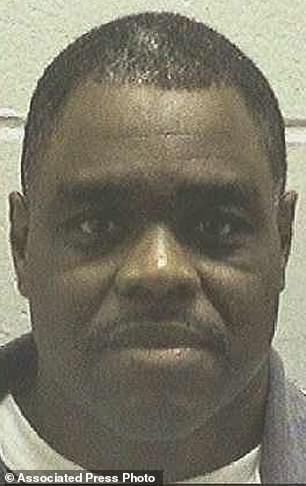 Scotty Garnell Morrow, 52, was executed on Thursday at 9.38pm in a Georgia state prison for the murder of his ex-girlfriend and her friend in December 1994

The state of Georgia has executed a man who killed his ex-girlfriend and another woman in a chilling murder nearly 25 years ago on Thursday evening.

Scotty Garnell Morrow, 52, was pronounced dead at 9.38pm on Thursday following an injection of pentobarbital at the state prison in Jackson.

He was killed after the Supreme Court rejected a last minute bid to block his execution.

Before taking his last breaths, Morrow enjoyed his last requested meal of a hamburger with mayonnaise, two chicken and waffle meals, two all-beef franks, and a bag of popcorn.

He washed down the meal with a large lemonade and for dessert ate a pint of butter pecan ice cream.

Prior to his death over the phone he confessed to that he didn’t want to die.

‘I don’t want to, but if that’s what happens, I can’t change anything,’ he added.

He was a father of two and grandfather of four.  He was the first person to be executive in Georgia this year and the fifth to be executed nationwide in 2019.

Speaking on the Christmas 1994 murder he’d lose his life for he said, ‘It was a crime of passion. I lost control of my emotions.’

Morrow was convicted of murder in the shooting deaths of his ex-girlfriend Barbara Ann Young and her friend Tonya Woods at Young’s Gainesville home in December 1994. A third woman also was shot but survived.

Morrow and Young had been dating for about six months when she broke up with him in December 1994 because he had become abusive, a Georgia Supreme Court summary of the case says.

When he went to her house on December 29 to win her back, he became violent and shot her dead in front of her five-year-old son who was hiding in his mother’s bedroom.

Young was in her kitchen with two of her children and two friends when Morrow arrived.

The pair argued and Woods told Morrow to leave, saying Young didn’t want to be with him anymore.

Morrow yelled at Woods to be quiet, pulled a handgun from his waistband and began shooting.

He shot Woods in the abdomen, severing her spine, the summary says. He also shot Young’s other friend, LaToya Horne, in the arm. 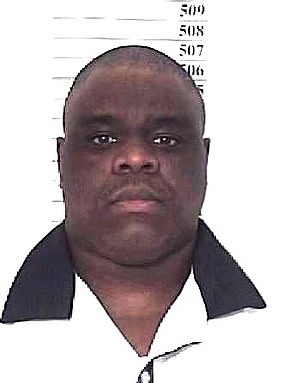 Morrow pictured above in an old undated mugshot

Young fled the kitchen and Morrow followed her to her bedroom, where he beat her and then followed her back into the hall, grabbed her by the hair and fatally shot her in the head, the summary says.

Morrow then returned to the kitchen, fired a fatal shot under Woods’ chin and shot Horne in the face and arm before leaving the home.

Young and Woods died of their injuries. Horne was severely wounded.

Morrow was arrested within hours, and confessed to shooting the women.

Morrow’s attorneys have argued he was beaten and raped as a child and that lingering effects from that abuse have left him unable to properly process and express his emotions.

When Woods told him that Young had just been using him for money and companionship while her ‘real man’ was in prison, he snapped, his lawyers have said.

Morrow was convicted on two counts of malice murder, among other charges, in June 1999 and given the death penalty.

A state court overturned his death sentence in February 2011, finding that his trial lawyers didn’t do enough to investigate and present mitigating evidence during the sentencing phase of trial. But the Georgia Supreme Court reinstated the death sentence later that year.

His standard state and federal appeals were exhausted in February when the U.S. Supreme Court declined to hear his case.

In a clemency petition, Morrow’s attorneys had asked the State Board of Pardons and Paroles to spare his life according to the

The board rejected that request after a closed-door hearing Wednesday. The parole board is the only authority in Georgia that can commute a death sentence.

Morrow’s lawyers had described him in the petition as rehabilitated and a model prisoner on death row, a mentor to other prisoners and a help to guards.

They said he feels great remorse for the pain and loss he caused the Woods and Young families.

Morrow’s attorneys also filed a petition in a state court saying his death sentence was unconstitutional because it was improperly imposed. 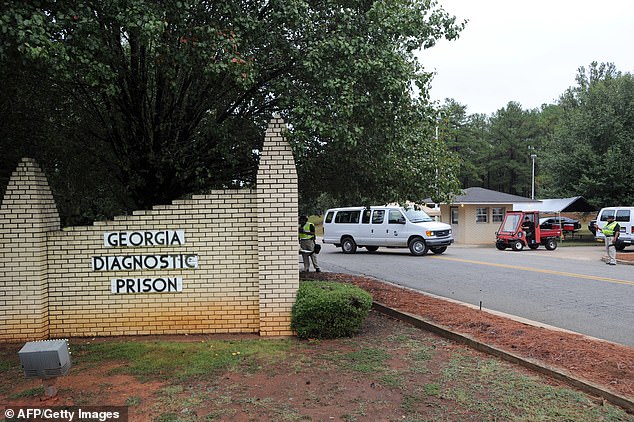 He was executed at the Georgia Diagnostic and Classification Prison in Jackson, where he has spent nearly one-third of his life

Attorneys representing Morrow in post-conviction proceedings challenged the constitutionality of his sentence in a petition filed in federal court in 2012.

His trial attorneys failed to adequately investigate his childhood, so jurors didn’t hear about years of abuse and bullying Morrow experienced as a child that left him tormented and unprepared to function in a healthy relationship, his post-conviction attorneys wrote.

If his trial attorneys had done a proper investigation, they could have proven that Morrow ‘was a genuinely nice guy who, because of the psychological pain of his past, snapped,’ his lawyers argued.

They say he wasn’t able, emotionally, to share his childhood trauma to the psychologist during his 1999 trial.

His violent childhood led him to bottle up his emotions, left him craving acceptance and love and made it tremendously difficult for him to appropriately communicate his emotions, his lawyers wrote.

Woods told him Young didn’t need him anymore and had just been using him for financial support while her former boyfriend was in prison, the application state. Those comments ‘detonated a lifetime of unresolved torment and rejection in Mr. Morrow,’ and he snapped, his lawyers wrote.

He immediately felt remorse as he drove home and decided to kill himself, only stopping when he heard his young son calling him because he didn’t want the boy to find him dead, according to a letter from his ex-wife, Claudette McCray, cited in the application.

Morrow has been tormented by the pain and loss he caused for the Young and Woods families, and has been especially devastated at having taken Young from her five children, the application says.

He remains close to his own family and, despite being locked up, is actively involved in the lives of his two adult sons, grandchildren and other relatives, the petition says.

He has also sought redemption through deep commitment to his faith, the application says. Several prison guards, counselors and chaplains are quoted as saying he’s an exemplary inmate who serves as a mentor and model to others on death row and a help to guards.

Lawyers for the state argued those claims had already been considered and rejected by courts.

A judge agreed with the state and dismissed the order, and Morrow’s lawyers appealed to the state Supreme Court.

Trump needs a House Power, however Pentagon could name for the creation of a House Command as a subs...
Top Yale Professor labels claims she groomed Brett Kavanaugh's clerks 'outrageous' and '100% false'
Musk says Tesla's new chairwoman will not rein him in
Cold case solved after 51 years, only for cops to discover the suspect had died
Stunt actors furious that they still don't get to participate in Oscars as 100K sign petition
Trump cools expectation ahead of his summit with Kim Jong Un
Ruth Bader Ginsburg PRAISES Brett Kavanaugh for his all-women team of legal clerks
Snoopy, Pikachu and other giant colorful balloons ready to fly in the Macy's Thanksgiving Day Parade