Michael Ball flashed a broad smile and revealed that he will be stepping into plus-size frocks once more — as laundress Edna Turnblad, in the joyously infectious musical Hairspray.

The actor won an Olivier award in 2008 for his portrait of the Sixties Baltimore blue-collar family momma: an agoraphobic whose teenage daughter urges her to leave the house to help her change the world.

‘It’s the most liberating thing in the world to put on a frock and become Edna,’ Ball told me. 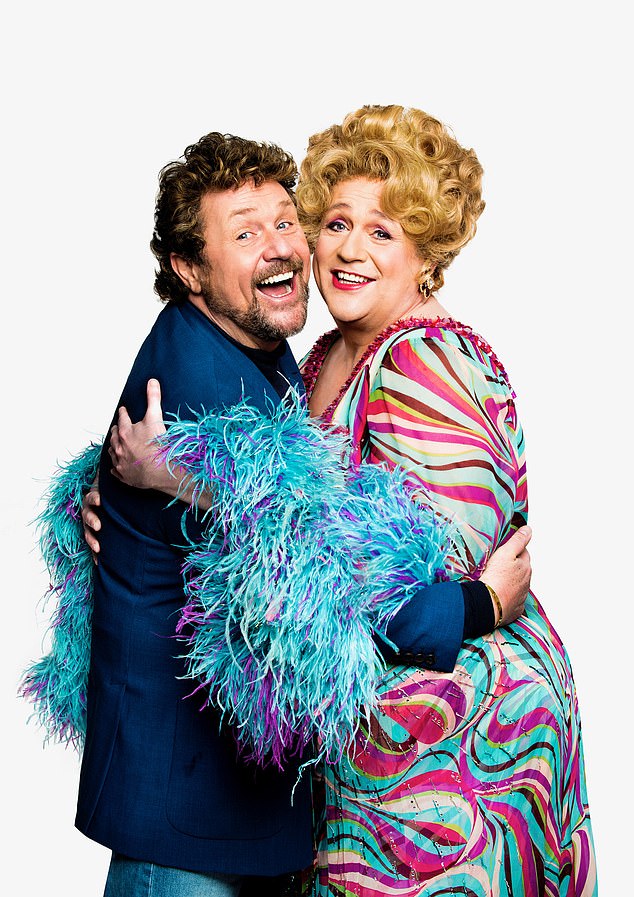 How so? He blushed, then explained. ‘I don’t know… because you’re not you. Wearing a dress gives you a licence to be really free. To be rude.

‘In a nice way,’ he added quickly. ‘To be flirty, in a wholly inappropriate way.’

We’re chatting in the Sky Bar at the London Coliseum, home to the English National Opera, where Hairspray — with the original award-winning creative team of director Jack O’Brien, choreographer Jerry Mitchell and producer Adam Spiegel — will run for an initial 12-week season from April 23 next year.

Ball admitted to ‘borrowing’ one of Edna’s posh frocks (and a pair of shoes) after touring with the show ten years ago. 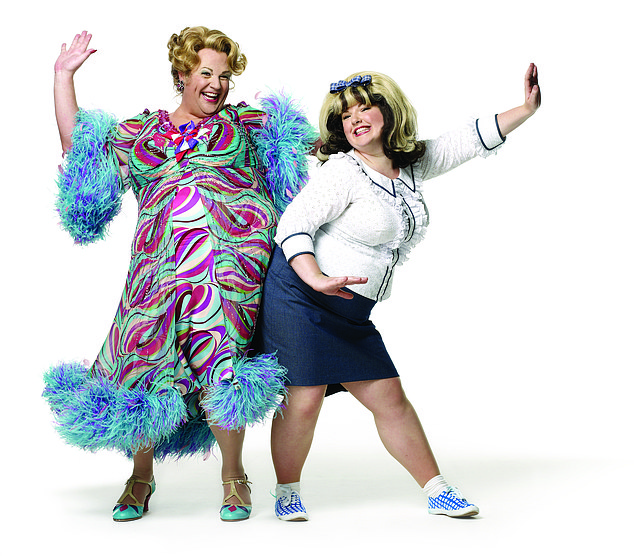 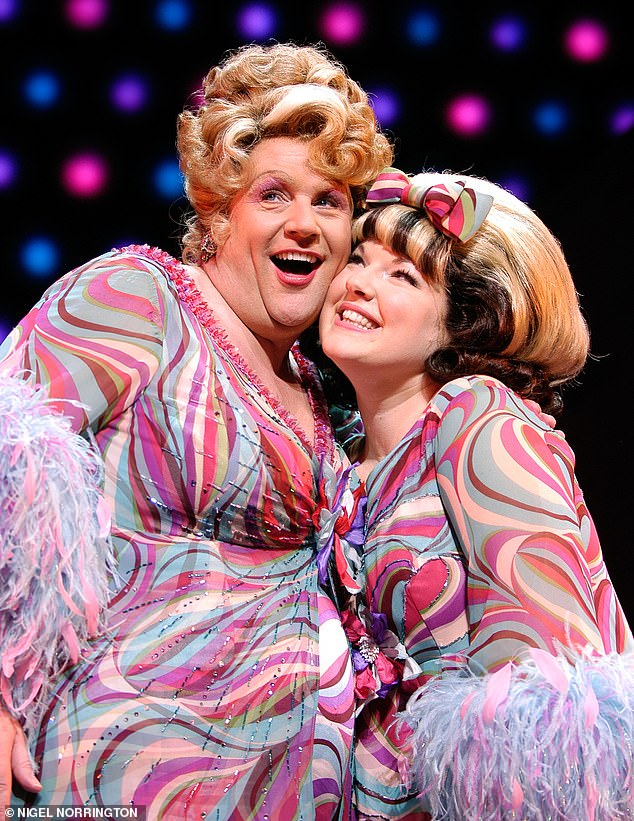 When I wondered aloud whether Edna was still, as she boasts in the show, a 54EEE bra size, Ball chuckled.

‘She is the same size; I’m not, luckily. She’s a big girl. I’ve still got the boobs at home. In a private place,’ he said, as we discussed Edna’s embonpoint.

It’s complicated, this blokes playing women on stage business. For Ball, it means a fat suit and made-to-measure décolletage.

‘They’re proper prosthetic boobs,’ he insisted. ‘Boy, they weigh a bloody ton. They’re huge! They go outside the padding, so you know what it feels like to be a big girl.’ Dancing with them on can be tricky. 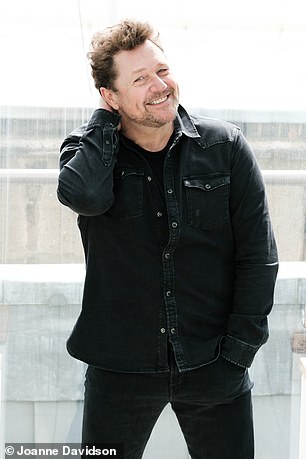 ‘My back is knackered with the weight,’ Ball admitted. ‘If you’re gonna dance, you have to hoik ’em up. But my movements are modelled on what women do.

‘I’ve followed women around supermarkets, thinking: ‘How are they walking? How do they reach for a can on a shelf?’

‘The moves are so delicate, no matter the size. It’s fascinating to watch women… for professional reasons!

‘But that’s what it takes to become Edna. You play her for real. She’s a mother and a wife, with issues. If you don’t play her real, there’s no emotional arc.

‘You absolutely want to believe that she’d do anything for her daughter. In fact, she’s protective of everyone.’

As far as body shapes go, Ball noted: ‘Edna’s my gran.’ His paternal grandmother Agnes Lillian (fondly known as Auntie Lil) was, Ball recalled, ‘a big woman, always around the house in a housecoat’.

‘Edna even smells like my gran. Madame Rochas perfume — she always smelled of that.’

Ball knew he wanted to play Edna in the West End the moment he saw Harvey Fierstein originating the role on Broadway in 2002.

The British actor had notched up star-making parts in Les Miserables (Cameron Mackintosh cast him as male ingénue Marius three decades ago, and for 16 weeks this summer, from August 10, he will take on the part of hard-hearted Inspector Javert at the Gielgud), Phantom Of The Opera, Aspects Of Love and The Woman In White. But he still had to audition for the part of Edna.

Spiegel said fellow creatives O’Brien and Mitchell were so adamant Ball be cast they wouldn’t let him see any of the runners-up. ‘They said it had to be Michael — and they were right,’ Spiegel said. 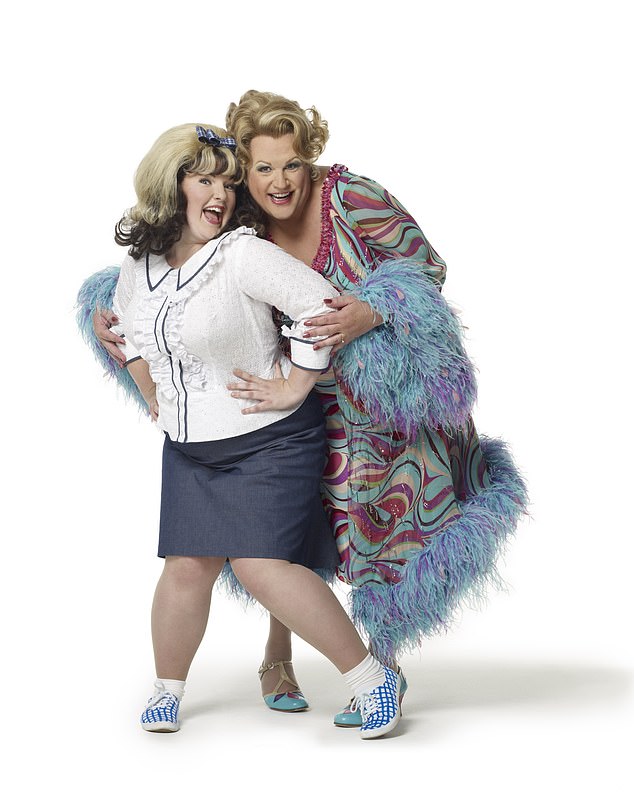 Michael is having a Ball playing Edna opposite Leanne Jones as Tracy, but the heavy costume has left him with a bad back

It was the making of Ball. He went on to star in Sweeney Todd at Chichester Festival Theatre — a performance that elevated him as a thespian and earned him another Olivier award.

‘Michael never stops growing,’ O’Brien said. ‘When people like Michael and, say, Nathan Lane, rise to the top of their profession, they’re eager to extend themselves.’

(He’s right: Ball is currently on the road, doing a concert tour to promote his new chart-topping album, Coming Home To You.)

We all agreed that Hairspray’s return is timely. Although the show’s packed with great songs and an uplifting sensibility, it is, as O’Brien observed on the phone to me from New York, ‘sweetly subversive’.

The heroine, Tracy Turnblad, is a plump girl who wants to dance with the cute, skinny boy. She also wants the African-American kids, who are banned from doing so (this is the early Sixties), to be allowed to dance on a TV rock show.

The piece has become a classic, and it will be good to see a first-rate production of it again. As O’Brien said: ‘We’re wildly exited to get it together.’

The original London Tracy, LeAnne Jones, was electrifying. ‘There are very few leading roles for plump girls, and that’s an unfortunate reality,’ Spiegel said. He said casting director Jill Green will embark on a search right away for their Tracy.

O’Brien and Mitchell will visit London in the coming months to collaborate with her on casting.

The couple from Washington D.C. sitting in front of me in the National Theatre’s Olivier stalls on Monday had never heard of Andrea Levy.

And they didn’t know what the adaptation of her novel Small Island was about.

They wanted to know a little about the story.

So I gave them a spoiler-free precis of the tale of Hortense (a superb Leah Harvey) who sails from Jamaica to England. And Queenie (Aisling Lofting), who runs a boarding house in Earls Court.

Every time a nasty comment was made to a Caribbean character, the woman in front turned around to make sure I was OK.

Actually, I was fine. But it was very nice of them. Director Rufus Norris’s production is both powerful and thrilling.

The acting across the board is great, but I have to single out David Fielder as Arthur, Queenie’s father-in-law.

He captured the soul of a man shattered by the hell of war.

Quentin Tarantino, 55, and singer Daniella Pick, 35, share their first dance as husband and wife
Jonas Brothers are 'set to release' their comeback single
BRIAN VINER reviews Quentin Tarantino's latest blockbuster:Once Upon a Time... In Hollywood
Fans question Jasmine Yarbrough over whether she's pregnant after her wedding to Karl Stefanovic
The X Factor: Celebrity EXCLUSIVE: Samira admits meeting Simon Cowell is 'a lifelong dream'
Mark Wright cuts a casual figure in a tight black top as he enjoys a sunny stroll in LA
Jessica Simpson steps out in a bold look after revealing 100LB weight loss in six months
Myles Stephenson reveals his shocking weight loss after three weeks in hospital