Punters have made an 11th-hour gamble on the Duke and having a baby boy as excitement continues to build over the birth of their first child.

Bookmakers said bets are pouring in on and Meghan having a boy, with the odds down from 11/10 to evens today – although a girl is still the favourite at 8/11.

Meghan told well-wishers her due date was the end of April or early May, but royal fans are still waiting for news, with no sign of the youngster so far. 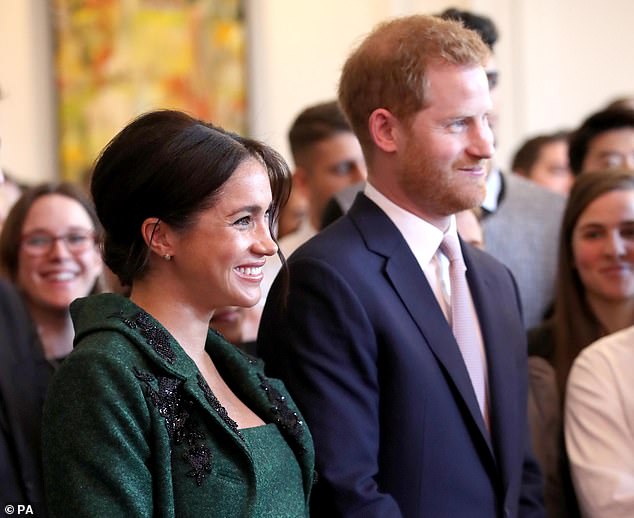 The favourite for the name with Ladbrokes is now a tie between Grace and Diana at 6/1, followed by Arthur and Elizabeth at 8/1 and Philip at 10/1.

Further behind are Allegra, James and Alice at 12/1, and Victoria and Albert at 16/1. If the baby arrives today, they will be born on Princess Charlotte’s fourth birthday.

Meghan and the Duke of Sussex have said they will only announce news of the birth once they have had time to celebrate together as a new family.

A Ladbrokes spokesman said: ‘A baby girl has been the favourite since Harry and Meghan announced their pregnancy, however, it’s now a little boy that we’re seeing an influx of bets for.

‘Time will soon tell which set of royal fans are on the money, but this last minute gamble on a boy could prove to be a case of perfect timing.’ 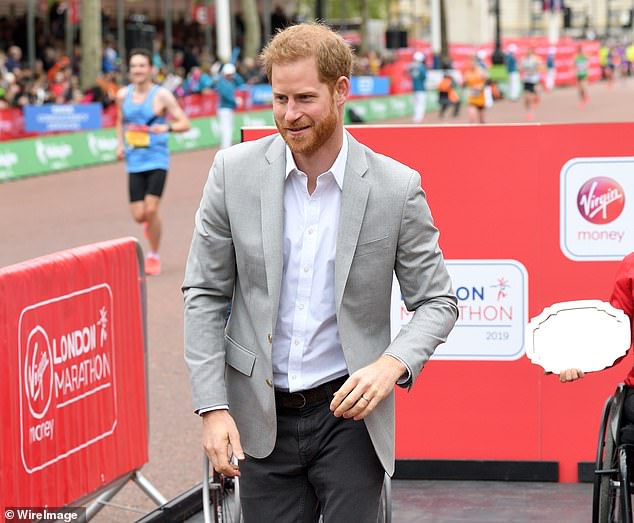 Prince Harry at the London Marathon on Sunday. He is travelling to the Netherlands next week

Yesterday, Prince Harry announced he will travel to the Netherlands next week – despite his pregnant wife being already overdue with their first baby.

Buckingham Palace said that the duke would undertake an official visit to the country next Wednesday and Thursday, starting off in Amsterdam.

This will be followed by a trip to The Hague to launch the one-year countdown to the Invictus Games, his Paralympic-style event for injured service personnel.

The Duchess of Sussex is expecting any day now, with sources telling the Daily Mail that the baby was due last weekend.

It is understood that the Netherlands visit has been pencilled in since last year but aides had not announced it due to the potential clash with the birth. 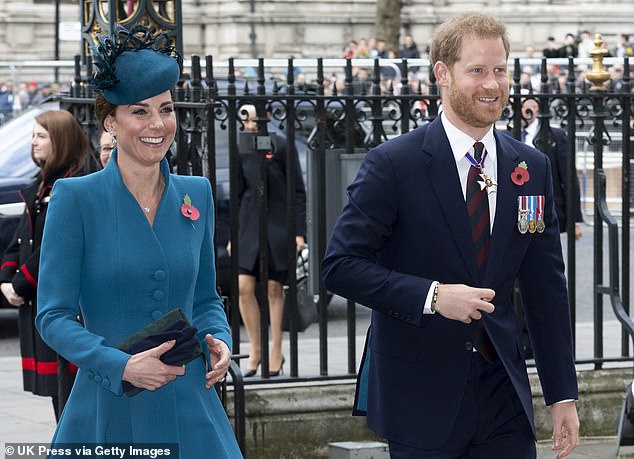 Sources have said the prince is ‘desperately keen’ to attend the Invictus launch.

But if Meghan hasn’t given birth by the middle of next week, or if the baby has only just been born, then he would reluctantly cancel.

If the seventh in line to the throne does arrive before the weekend however, it is likely that Harry would go.

Meghan has her mother, Doria Ragland, staying with them at Frogmore House in Windsor, so will be in good hands if he does fly out.

Friends are said to be queuing up to visit but may have to postpone due to what has been dubbed the ‘Sussex Standby’.

While the wait goes on for the arrival of the Duke and Duchess of Sussex’s baby, here are 10 facts about royal births:

The Queen – then Princess Elizabeth – was born by Caesarean section in 1926. But the surgery took place in her grandparents’ home in Mayfair, rather than in a hospital.

Lady Louise Windsor was the first of the Queen’s grandchildren to be born in an NHS hospital. She arrived prematurely following an emergency Caesarean after a seriously-ill eight months pregnant Countess of Wessex was rushed to Frimley Park Hospital in Surrey.

The Duchess of Cambridge had a natural birth with all three of her children at the exclusive Lindo Wing – and a team of 23 medical staff were on hand in case of emergencies.

The Duke of Edinburgh, then Prince Philip of Greece and Denmark, was born on the kitchen table at his family home Mon Repos in Corfu.

Prince Charles’s birth in 1948 was the first time in centuries that there was not a government minister there to witness the arrival of a future heir to the throne. It was an age-old custom designed to ensure that no substitute baby had been smuggled in in a warming pan or similar receptacle.

6. The shadow side of marriage

Queen Victoria – who had nine offspring – used to refer to childbearing as ‘the shadow side of marriage’ or ‘die Schattenseite’. Her first babies were born before anaesthetics were available.

Victoria used chloroform for later births, sniffing it from a handkerchief. When it was first pioneered, traditionalists opposed the drug, claiming labour pain was responsible for a woman’s love for her child, and sufferings during childbirth were a divine destiny. But Victoria refused to believe such a notion, and her support for the ‘blessed’ method and its ‘soothing, quieting and delightful beyond measure’ effect ensured its accepted use in society.

The Princess of Wales was induced with Prince William, with Diana telling friends her baby was ready and ‘well cooked’. Her labour was difficult and she was continually sick, with doctors considering a Caesarean. Future king William was eventually born without a C-section after the princess was given an epidural.

After William arrived at the Lindo Wing in 1982, new father the Prince of Wales asked the rapturous crowds outside the hospital if they could make a little less noise.

In 1984, Diana knew Prince Harry was going to be a boy following a scan. But she did not tell husband Charles, fearing he wanted a girl, and kept the news secret throughout her pregnancy.