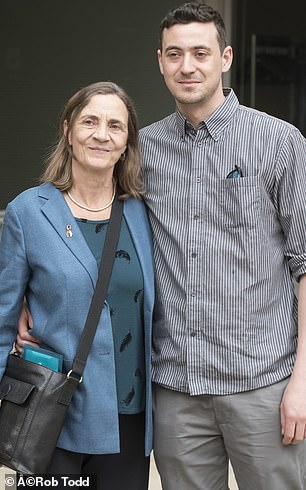 Carolyn Challis with son Shea, 26, outside the inquiry today. She was pregnant with Shea when she was diagnosed with hepatitis C

A mother-of-three has today revealed she was infected with hepatitis C after receiving contaminated blood products during cancer treatment, while she was pregnant.

Carolyn Challis told the Infected Blood Inquiry she was being treated for Hodgkin’s disease when she received three transfusions in 1992 and 1993.

But in 1993, she was diagnosed with hepatitis C which had a ‘massive impact’ on her family, as her children in and out of foster care while she battled her illness.

Thousands of patients were infected with HIV and hepatitis C via contaminated blood products in the 1970s and 1980s, in what has been labelled the worst treatment disaster in the history of the NHS.

But Ms Challis’s devastating account added to fears that even more people could have been affected into the 1990s.

The inquiry has also heard harrowing evidence today from a group of haemophiliac teenagers who formed a pact that ‘whoever survived would find out what was killing them.’

Another woman spoke out about how she tried to take her own life when she contracted hepatitis C after receiving contaminated blood products from transfusions during cancer treatment. 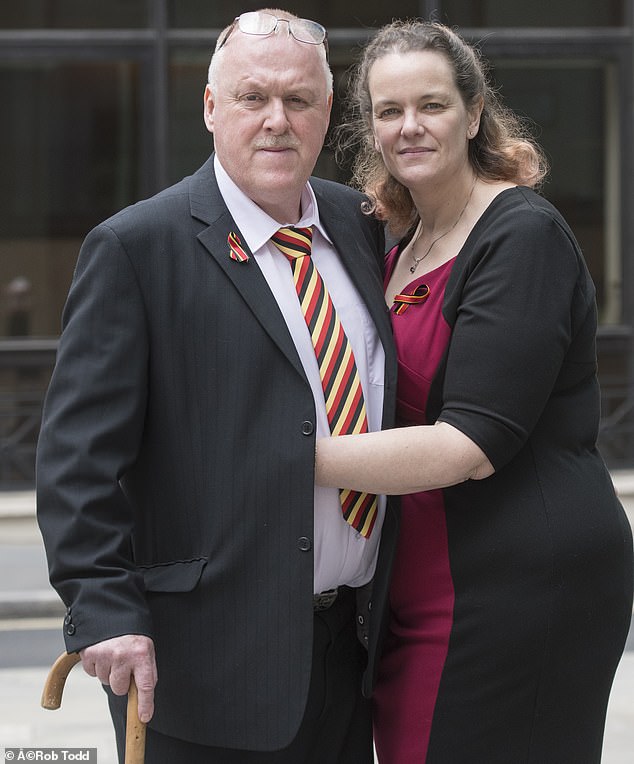 Teenagers tried to find out ‘what was killing them’ as survivor reveals, ‘I’m the only one left’ 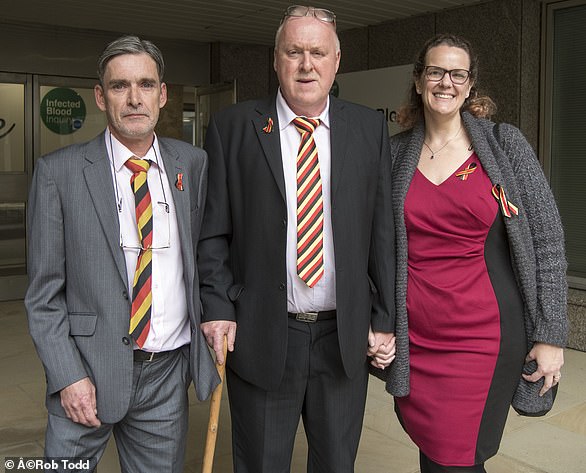 Stephen Nicholl was infected while being treated for haemophilia at Treloar’s school. He is pictured outside the inquiry with his wife Annetta and best friend Gary Webster, who was also infected

A group of haemophiliac teenagers formed a pact that ‘whoever survived would find out what was killing them.’

Stephen Nicholls was diagnosed with haemophilia aged one and attended Treloar’s School for children with disabilities outside Alton, Hampshire, when he was eight in 1976.

He told the Infected Blood Inquiry on Wednesday he was one of 89 boys at the school with haemophilia offered treatment onsite.

It was only after leaving the school that he was diagnosed with hepatitis C in 1991.

Part of the inquiry is investigating the treatment the students at Treloar’s received to discover if they were given contaminated blood products.

But Mr Nicholls said that when the first haemophiliacs started dying he made a pact with his school friends that those who survived would try to find out what had happened.

The 52-year-old said: ‘It was my last year at a school when the first haemophiliacs were starting to die and everyone was really scared.

‘We realised that ‘this is really serious’, and ‘this is killing us’ or ‘killing haemophiliacs’.

‘There were four or five of us in a room and we said: “This is going to happen to us, we can see it.”

‘We said: “Right, we’ve stuck together right through our childhood. If it happens and it kicks off we’re going to rely on the person still alive to pursue it and find out why and what went wrong.”

‘I’m the only one left. That’s tough. I think about that every day.’

Mr Nicholls, from Farnham in Surrey, told the inquiry that only 16 of the 89 boys are alive today.

‘To see your friends dying one by one, it’s always in the back of your mind: I could be next.’

Mr Nicholls got married and started a family, and worked in the parks department of a council until he was discovered to be a haemophiliac and asked to leave.

He said: ‘They made it very clear that they were uncomfortable with me being there. They wanted to me resign, which I wouldn’t.

‘They said: ‘We would like you to leave and leave quietly.”

The father-of-two became a service engineer, first working for a company and then becoming self-employed as his health deteriorated.

The inquiry is chaired by former High Court judge Sir Brian Langstaff who has promised to ‘put people at the heart of the probe.’ 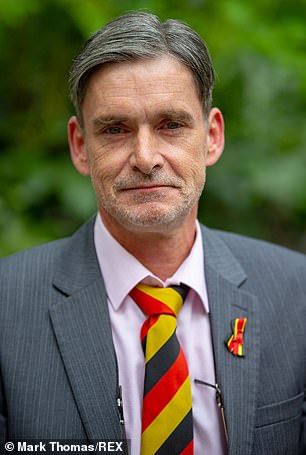 Gary Webster outside the inquiry building. When he was 17, Mr Webster was told he had HIV after being given contaminated blood products and given six months to live

Ms Challis has now called for everyone in the UK to given a £12 finger-prick test so they could be identified and treated, and ‘hepatitis C eliminated.’

Ms Challlis told the inquiry today: ‘They are not testing people – that’s my big, big mission, to get more information and awareness and get people tested.

‘It costs £12, it could be provided to every single patient. I want every single person in the UK tested and treated. If every person is tested we will find the missing thousands and we can eliminate hepatitis C.

‘They are talking about eliminating hepatitis C by 2025, they’re not going to do that unless they test everyone and find everyone. They can do it – it’s cheap.’

Ms Challis was speaking on the second day of the Infected Blood Inquiry in London.

Ms Challis said that after her cancer treatment ended hepatitis C began taking its toll, leaving her suffering brain fogs which were like ‘wading through treacle’, and fatigue ‘so deep and so profound that no amount of sleep fixes it’. 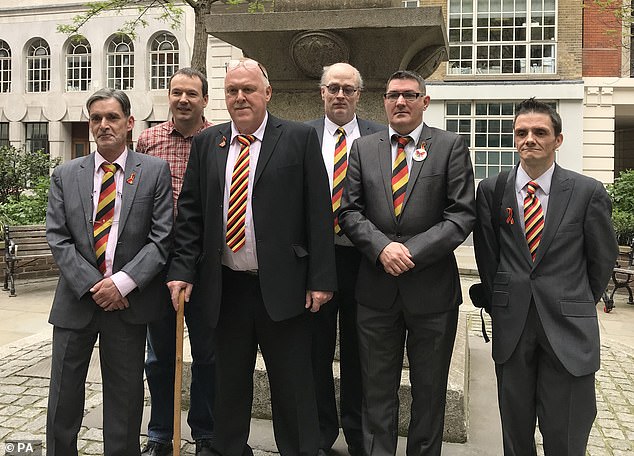 She added: ‘The hepatitis C impacted so much on my energy that when I should have been recovering and taking my three children back and being a good mum again I was constantly having to not attend.

‘Because of the cancer and then the hepatitis C they were farmed out, they were in and out of foster care for years.’

Ms Challis said she was also refused cash from the Skipton Fund because she had contracted her disease from a blood transfusion after September 1991, which was the fund’s cut off date.

She said she then had to rely on benefits and endure the ‘humiliation’ of work capability assessments.

She told the inquiry that she was initially found fit for work and had to appeal in order to get her benefits. She added: ‘It’s so, so stressful.’

Ms Challis was eventually cured of her hepatitis C after taking part in a clinical trial of a new drug called Epclusa in 2016.

She described the treatment as ‘magic’ and added: ‘I was discharged by my research nurse in a phone call and she rang me up and said ‘you’re cured, that’s it, and you don’t need to come to the clinic any more’.’

After the inquiry hears from victims in central London, there will be sessions over the coming months in Belfast, Leeds, Edinburgh and Cardiff.

Teenage carjacker opens fire on packed Kebab shop in bid to kill rival, with children inside
The incredible tale of Bert Trautmann: from Hitler Youth to breaking neck in FA Cup final
Pangolins are the most trafficked animal in the world and are now at risk of extinction
Now climate change protesters target the Natural History Museum
Two brothers take epic 'Rude Trip' around Britain
Britney Spears forgets her troubles while yachting with boyfriend Sam Asghari in Miami
Fully grown white rhino gets spooked by a cardboard cutout of itself left by zookeepers
Zuckerberg's aides blow-dry his armpits to help with anxiety sweat before speeches, book claims