The man behind the youngest woman to ever serve in Congress gets his moment to shine in the new documentary Knock Down the House.

Riley Roberts, who is the partner of , is seen supporting the then-political hopeful as she balances her bartending job and personal responsibilities while waging a campaign against Democrat incumbent Joe Crowley.

He is introduced after one of Ocasio-Cortez’s long days, with the two seen sitting inside her cramped apartment in the Bronx and lovingly bickering about the fact that Roberts had finished the pint of Ben & Jerry’s Americone Dream that the two had in the the freezer.

The couple then ponder whether they should have coffee or tea after their dinner. 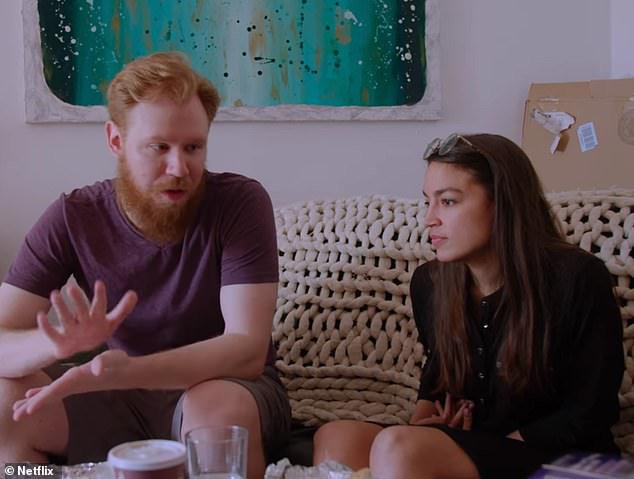 Down with AOC: Alexandria Ocasio-Cortez (above with boyfriend Riley Roberts) is one of the upstart politicians featured in the Netflix documentary Knock Down the House 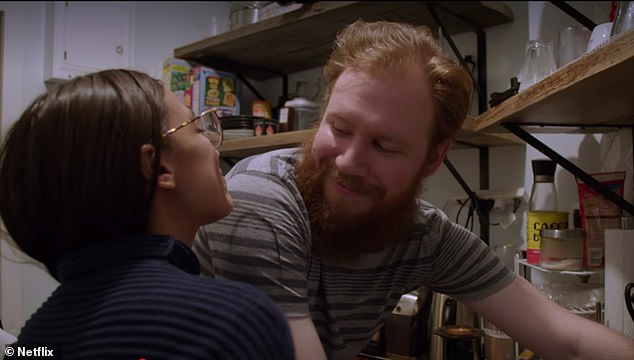 Happy couple: She is seen inside her cramped Bronx apartment with her boyfriend Riley Roberts (above) , who is introduced as the two lovingly bicker 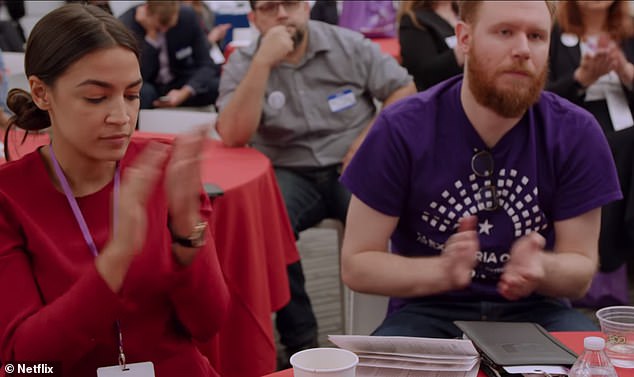 Beard: Roberts is shown as a mostly silent but very supportive boyfriend to Ocasio-Cortez

Ocasio-Cortez’s family is also a big part of the documentary, including her later father.

He is seen in some of the many childhood videos of Ocasio-Cortez, who breaks down in tears while recalling his death.

‘Losing him when you’re just figuring out the world was really hard,’ she explains, having lost him while she was away at college.

Her mother Blanca and brother Gabriel are also key players in the documentary.

Blanca is seen at one family gathering describing the time that Ocasio-Cortez attempted to run away from home, revealing she did not make it very far.

‘She went and got her suitcase, she put all the clothes there. She got a nice hat, she walk outside. She gets to the corner and she looking at both sides like which way do I go.’ 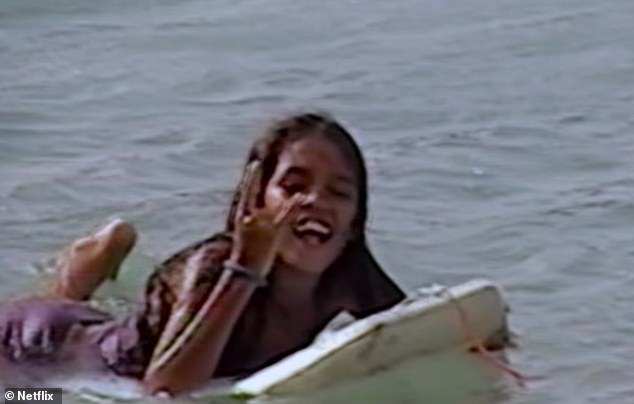 Surf’s up: There are also a number of childhood videos of AOC, including some with her late father 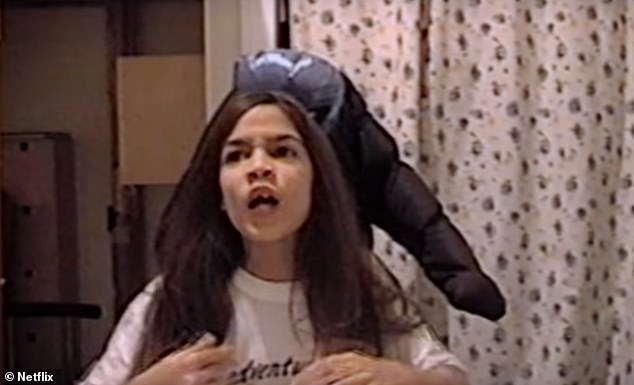 ET: The congresswoman breaks down in tears while speaking about the death of her father at one point in the special 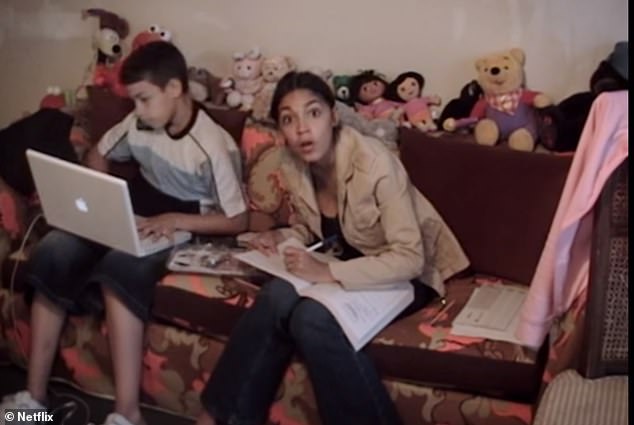 Siblings: Ocasio-Cortez and her brother in onr childhood video doing homework at their home just outside the Bronx 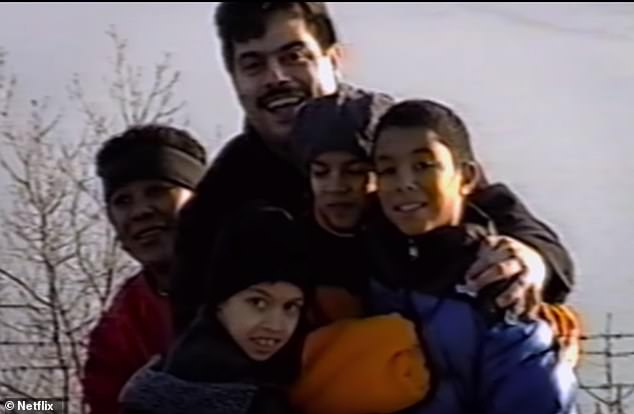 Blanca has previously revealed that she is a big fan of Roberts.

‘I love him,’ Blanca told DailyMail.com earlier this year.

‘He is the most loving, supporting person I’ve seen. He helped her tremendously during the election. They’ve been together for four years now, after they reconnected from a college breakup.

‘I know they love children, and they do very well with children from the family.

‘So, I hope they get married soon. Although they haven’t told me anything about their plans.’

Knock Down the House was purchased by Netflix at Sundance for $10 million.

It follows Ocasio-Cortez and a number of other working-class women who challenged powerful Democratic incumbents in primary races. 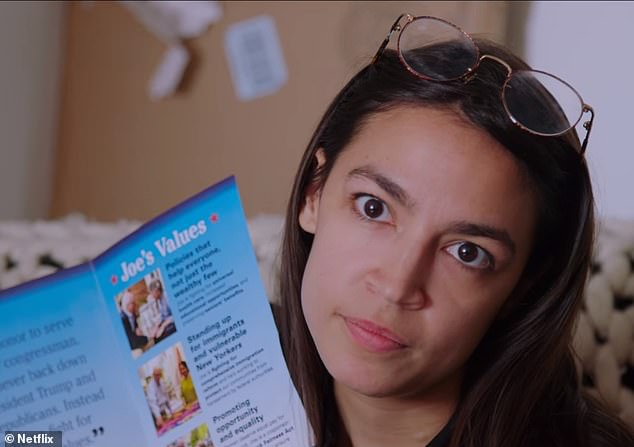 Big buy: Knock Down the House was purchased by Netflix at Sundance for $10 million and follows Ocasio-Cortez and a number of other working-class women who challenged powerful Democratic incumbents 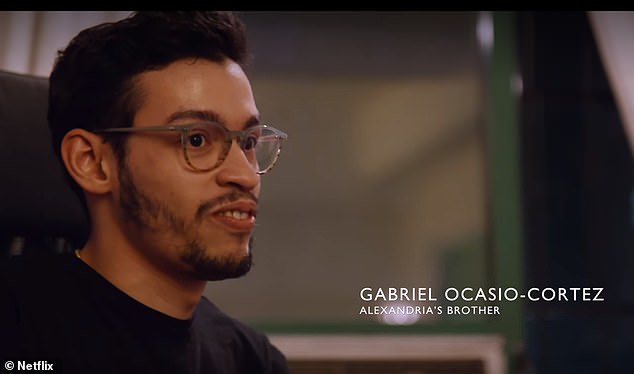 Family: Other scenes show AOC with her mother Blanca, her brother Gabriel (above) and canvasing the neighborhood with her niece 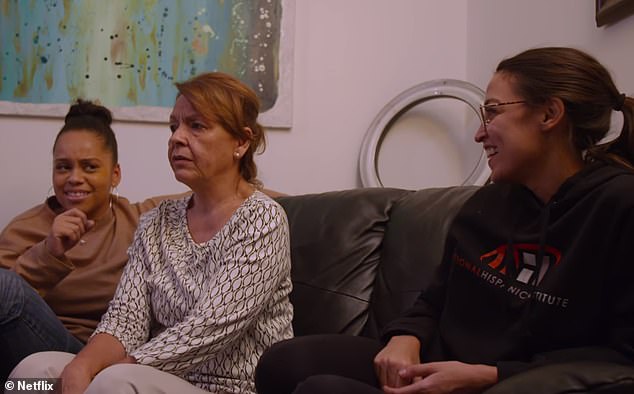 Mama mia: Blance (above) recalls the time that her daughter tried to run away from home as a child

The documentary has managed to grab the attention of Republicans as well, and already lead to one public spat between Ocasio-Cortez and Kellyanne Conway.

The Trump aide criticized Ocasio-Cortez on Fox News’ Hannity for promoting Knock Down the House on Twitter the day after the Sri Lanka Easter bombings.

That attack came after the two had already had a spat on Twitter regarding Ocasio-Cortez’s acknowledgement of the shooting at a New Zealand mosque but not the attacks in Sri Lanka, during which the congresswoman said she had been in Puerto Rico visiting her grandmother.

‘She said on Twitter, “I was away from tech, I was visiting my grandmother for Easter,”‘ said Conway.

‘I think that’s wonderful, but the very next day as they were picking through the rubble in Sri Lanka looking for survivors or the deceased, she had time to tweet about her Netflix documentary.’

Tiger Woods' ex-mistress is pictured in her mugshot
Heartwarming video shows real-life Bambi and Thumper snuggling in Washington resident's backyard
ISIS plotted to send operatives to the US through the border with Mexico
The secret behind Beyonce's bootylicious bounceback
Moment Usain Bolt and pals are caught up in a mass brawl
John Kelly says he warned Trump he would be impeached if he hired a 'yes man'
Prince Harry and Meghan Markle put third fence around home
Man arrested Jonathan Anderson, 33, for sexually assaulting woman while doing pushups at gym class