A woman has been criticized online for choosing to wear an all-white dress to another person’s wedding.

The unnamed wedding guest revealed she was going to wear a floor-length white dress when she took to social media to ask for hair and makeup advice, according to .

However, the photo was soon shared in a Canadian wedding shaming on Facebook, as people couldn’t believe she had chosen to wear a gown so similar to a wedding dress. 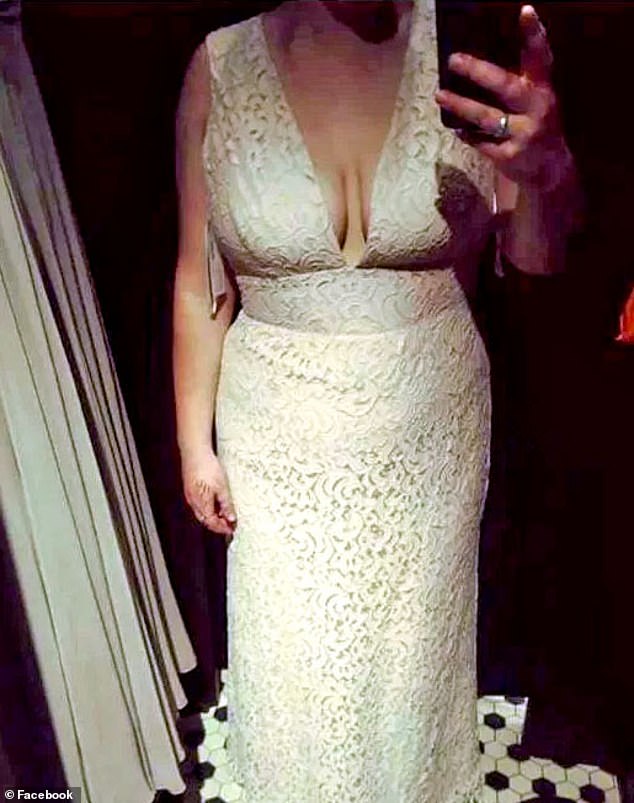 Viral: A woman has been criticized for choosing to wear a white dress (pictured) to another person’s wedding after a photo of it was shared in a wedding shaming group on Facebook

Yikes! Since the post was shared within the private group, it has become inundated with comments as people express their shock at the woman’s dress

‘Ladies, can I get some hair and makeup suggestions for this dress? I’m attending a destination wedding next week,’ the woman wrote in her original post, according to the publication.

And it wasn’t long before the post was shared in the popular group, which boasts over 80,000 members worldwide.

Since the image was shared, it has received dozens of comments as people expressed their shock at how similar it is to a wedding dress.

One user commented on the post, saying they thought it was inappropriate to wear such a dress to another person’s wedding.

‘It looks like a wedding dress, that is so wrong to wear to someone else’s wedding,’ they said.

Another wrote: ‘HELL NO. If she attends a wedding in that, she better expect to be immediately escorted out. She looks like a bride [and] 100% probably planned on stealing the spot light.

‘I severely hope she wasn’t an important person in whoever’s wedding she’s attending. If she even still is,’ they added.

Similarly, someone branded the woman ‘malicious’ for wearing the dress. They said: ‘Yeah no this is totally passing for a wedding dress. I am not a stickler for the “don’t wear white” rule but either this person is clueless or being malicious because it looks like she’s the bride.’

Another user in the group bluntly said: ‘This is a f***ing wedding dress.’

One user said they would ‘kick’ them out of the event. They said: ‘Absolutely no excuse to wear this to someone’s wedding.

‘If someone showed up to my wedding in this I would’ve asked my sister to kick them out. Bride should be the only one in floor length white,’ they added.

And it isn’t the first time a wedding-related issue has caused controversy on social media.

Backlash: The unnamed woman was branded ‘malicious’ for wearing a gown so similar to a wedding dress to another person’s special day

Earlier this month, a bridesmaid revealed that she was asked by the bride to have an abortion when she told her she was pregnant before the wedding.

Shared in a different ‘wedding shaming’ group on Facebook, the post, which was written by an unnamed woman, detailed that the bridesmaid, who was always told she would never be able to have children, thought the bride would be excited to hear her great news.

Instead, the bride told her bridesmaid that she would be ‘so stressed’ trying to get a dress fitting on her own. The bride also reiterated the fact that her wedding was going to be ‘kid free’.

She added that the wedding would be ‘difficult’ for the pregnant woman, before suggesting she get an abortion.

The post read: ‘So about a year before the wedding, I found out I was pregnant. I was always told I couldn’t have kids and so obviously my daughter not planned but I was over the moon.

‘So I told Kate, expecting excitement, right? Nope. She immediately told me that I was going to be so stressed trying to get my bridesmaid dress fitting on my own since I’d have to do it after everyone already had theirs (I was due in April, wedding was in June).

‘She reminded me that it was a kid free wedding, and then after thoroughly explaining how difficult her wedding would be for me, she said (verbatim) “so don’t you think it might be better for you to have an abortion?” I had to read that one a few times,’ she added.

Confused, the bridesmaid added that she asked the bride if she really meant what she had said.

She added: ‘I asked if she seriously just suggested I get an abortion to make her wedding go more smoothly???? And she told me I was ruining my life and then called her mom on me to tell me to have an abortion.

‘(Her mom texted me and said congratulations and said she was always there to support me no matter what I chose and to call her if I needed guidance).

‘Added bonus, one of her friend that I was friendly-ish with texted me later on to ask if I had aborted because if I had a baby at 21 he could never date me and he really saw a future for us,’ she said.

China demolishes second studio of artist and pro-democracy activist AI Weiwei
Cristiano Ronaldo 'hired detective to follow rape victim and discredit her'
Meghan Markle reveals she gets up at 4.30am to do yoga because pregnancy is ‘like having jet lag’
Expert reveals exactly what to eat for the 'best sleep of your life'
Real Housewives of Atlanta star Cynthia Bailey posts picture of non-cancerous tumor after surgery
Meghan reveals she 'dreams of wee ones running around the house'
Father of physical therapist who killed his wife, three children and dog tried to murder his spouse
Man, 29, is charged after stabbing of Muslim prayer leader at Regent's Park mosque