Sir Mo Farah has begun his bid to win a first London Marathon this morning.

Farah’s preparations have been marred by an extraordinary row with former distance star Haile Gebrselassie over an alleged robbery in the hotel owned by the retired Ethiopian.

The 36-year-old is up against world record holder Eliud Kipchoge, the Olympic champion who holds the course record and is looking for a fourth win in five years. 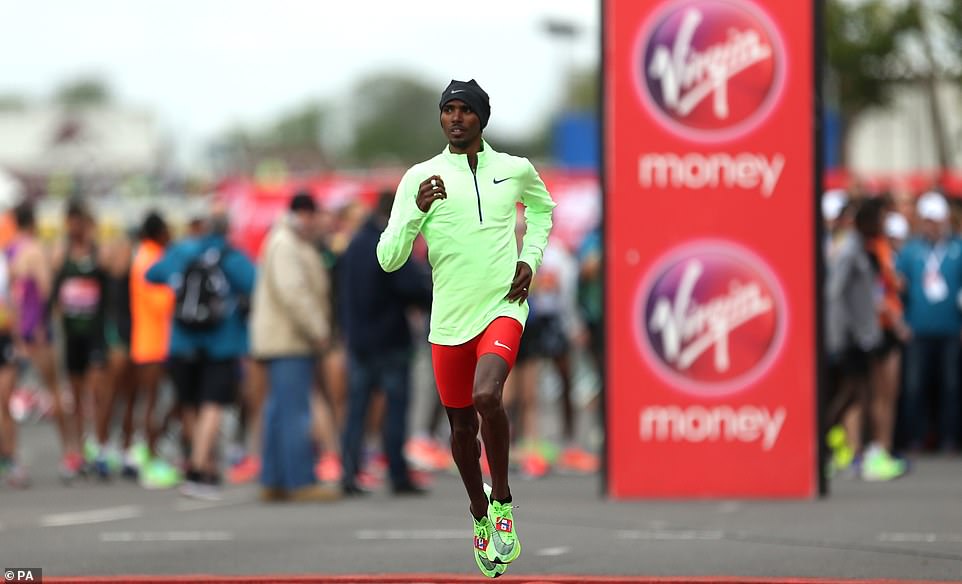 Mo Farah (pictured on the startline today) is hoping to win the Elite Men’s race in the London Marathon today. He is pictured in a photocall 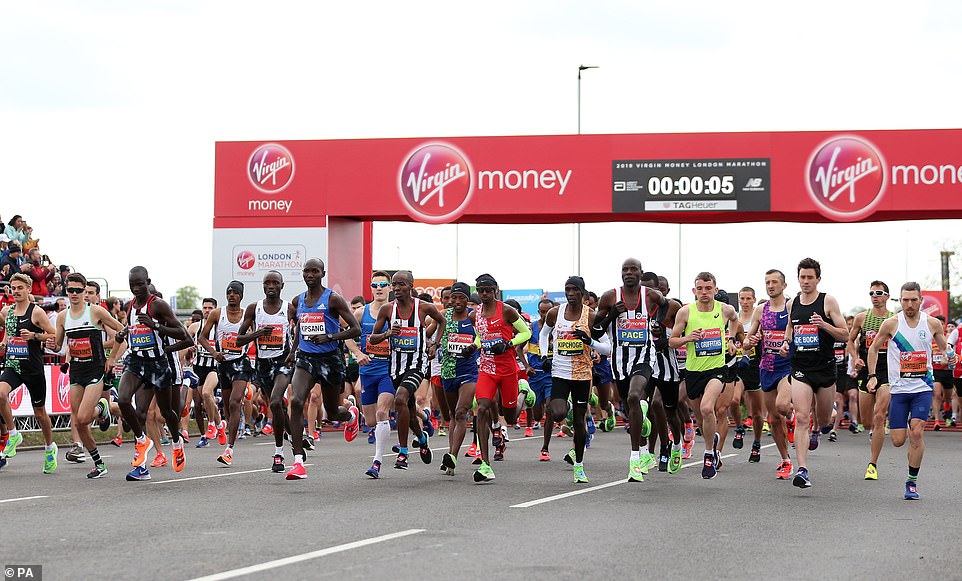 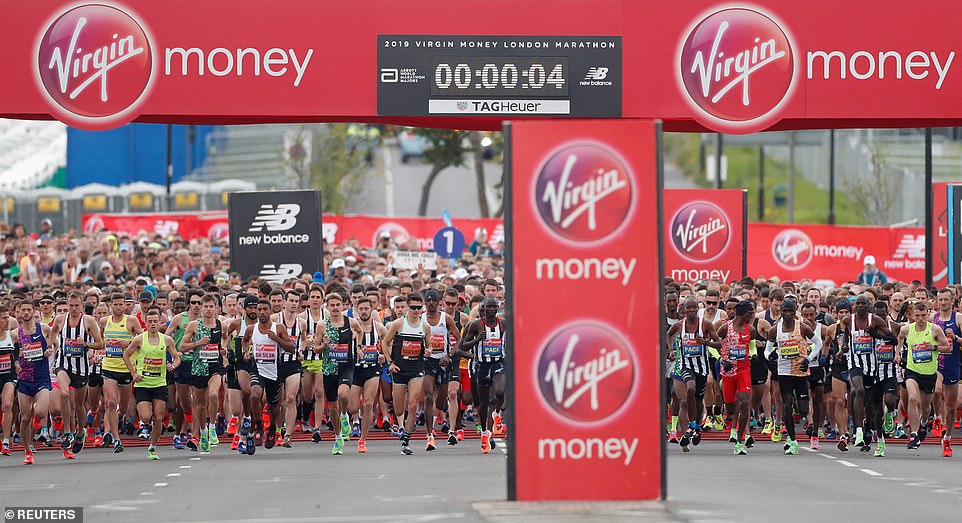 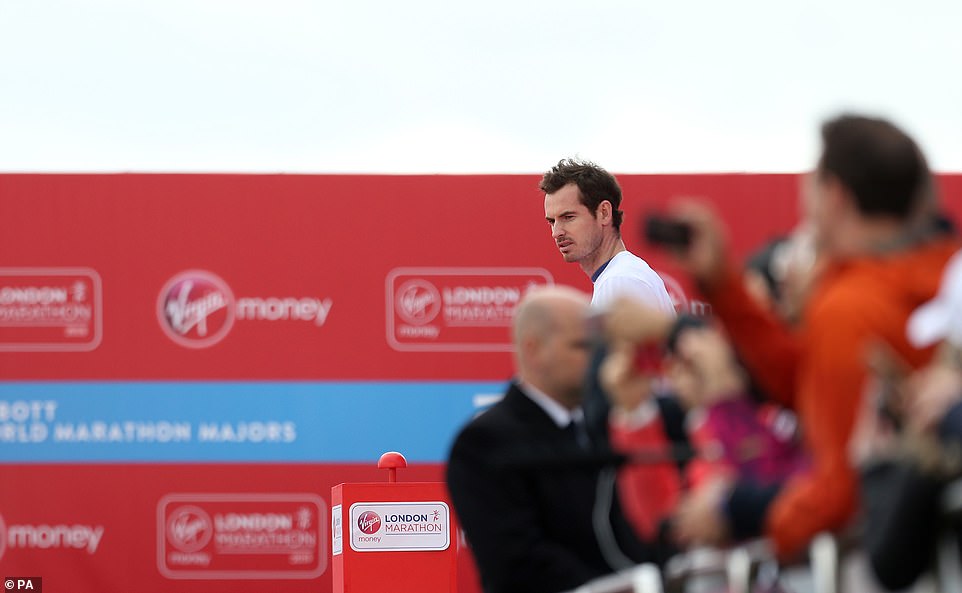 Farah’s coach Gary Lough said he felt he could turn the negative headlines surrounding the hotel incident into a positive.

Lough told the BBC: ‘He’s not shy at having a little bit of a distraction. I’m a bit disappointed that some of the stuff is kind of questioning his reputation, his character.

‘Maybe it didn’t come out in the right way but for him to get it off his chest and to be able to focus on this is by far for me the best scenario this week.’

Lough added: ‘There have been a lot of allegations, mostly unfounded, exaggeration.

‘It’s not all lies, Mo’s not an angel. There was a little bit of something that happened.’ 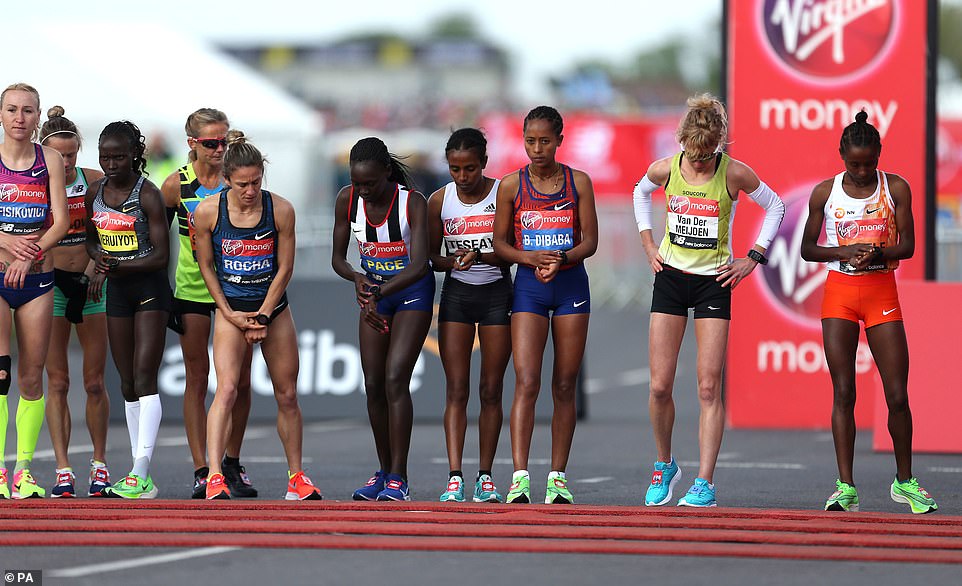 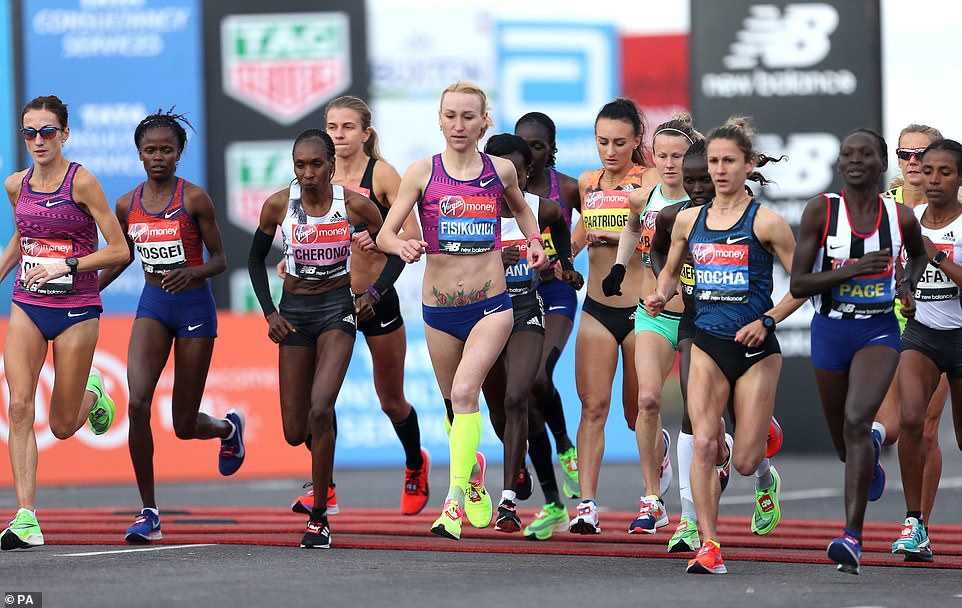 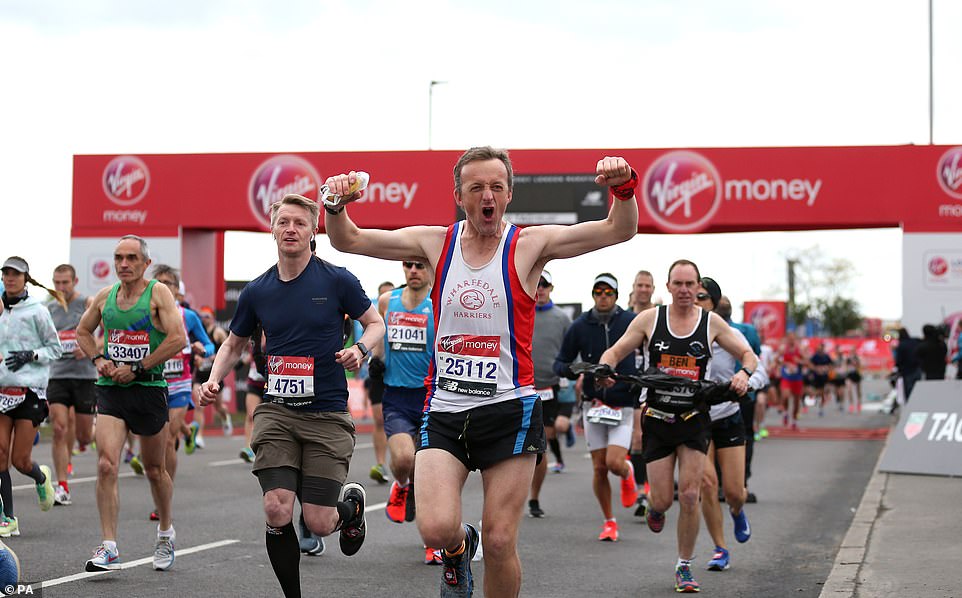 Tens of thousands of runners will take part in the 39th edition of themarathon, with money raised since the event began set to surpass £1 billion.

The event started with the Elite Wheelchair race at 9.05am before the World Para Athletics Marathon Championships Ambulant Athletes start five minutes later, followed by the Elite Women at 9.25am.

The Elite Men’s race started at 10.10am along with the British Athletics and England Athletics Marathon Championships and Mass Race.

Runners and racers are set for a chilly start before the tail end of Storm Hannah makes way for sunny spells, the said.

Pc Leon McLeod, 31, hopes to raise £10,000 for PTSD999, the charity which helped treat his post traumatic stress disorder after the attacks. 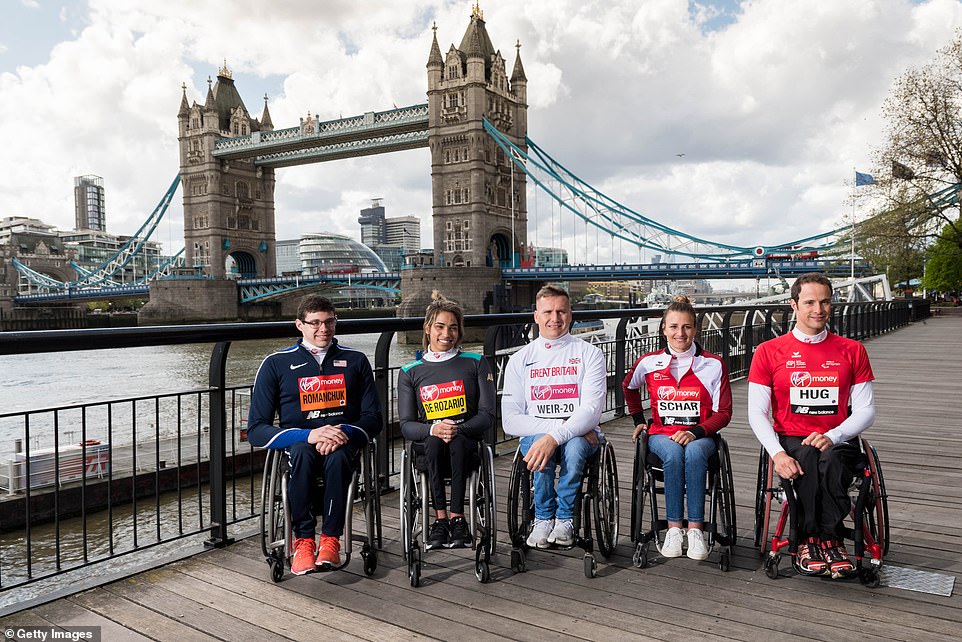 The event starts with the Elite Wheelchair race at 9.05am before the World Para Athletics Marathon Championships Ambulant Athletes start five minutes later

Dame Barbara’s husband, Scott Mitchell, who turns 56 on marathon day, has already helped raise £100,000 for Dementia Revolution, the 2019 Charity of the Year for the event.

Official figures from the Virgin Money London Marathon say the event has raised a total of more than £955 million for charities since the first in 1981. 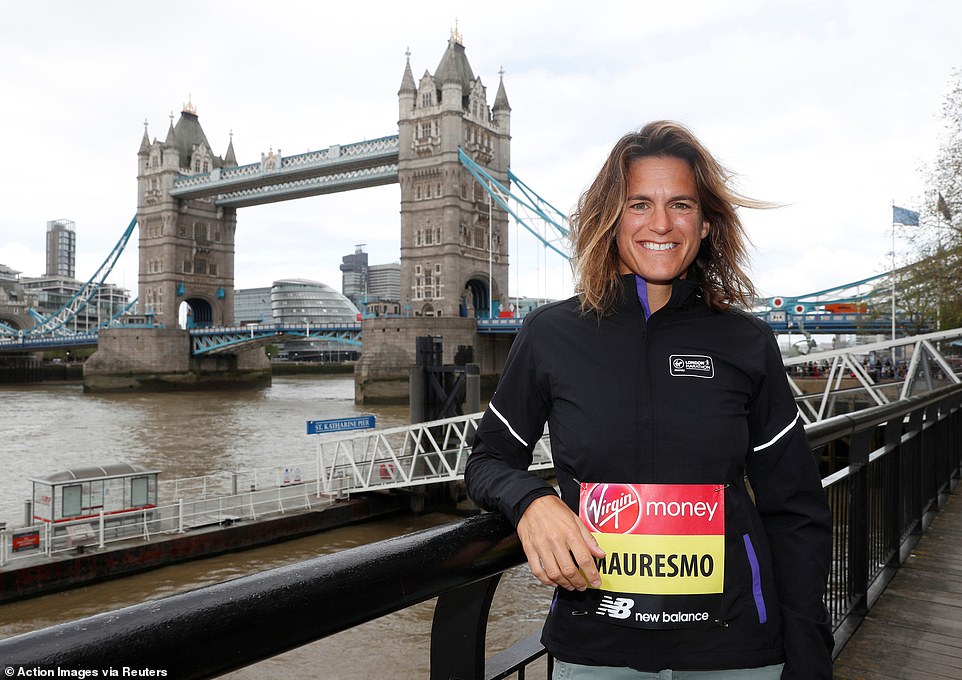 The Virgin boss tweeted a photo of himself running at the 2010 event wearing butterfly wings.

He commented: ‘Good luck to everyone running the @VirginMoney @LondonMarathon. Remember, don’t worry if you fall flat on your face – at least you’re moving forward! £VirginFamily’

Runners are expected to have favourable weather for running and racing through the capital.

Temperatures are expected to peak at around 16C (61F) on Sunday afternoon, while rain will be limited to a passing light shower or two and winds will be breezy at most.

Air pollution, the pollen count and ultraviolet (UV) levels are forecast to be low to moderate. 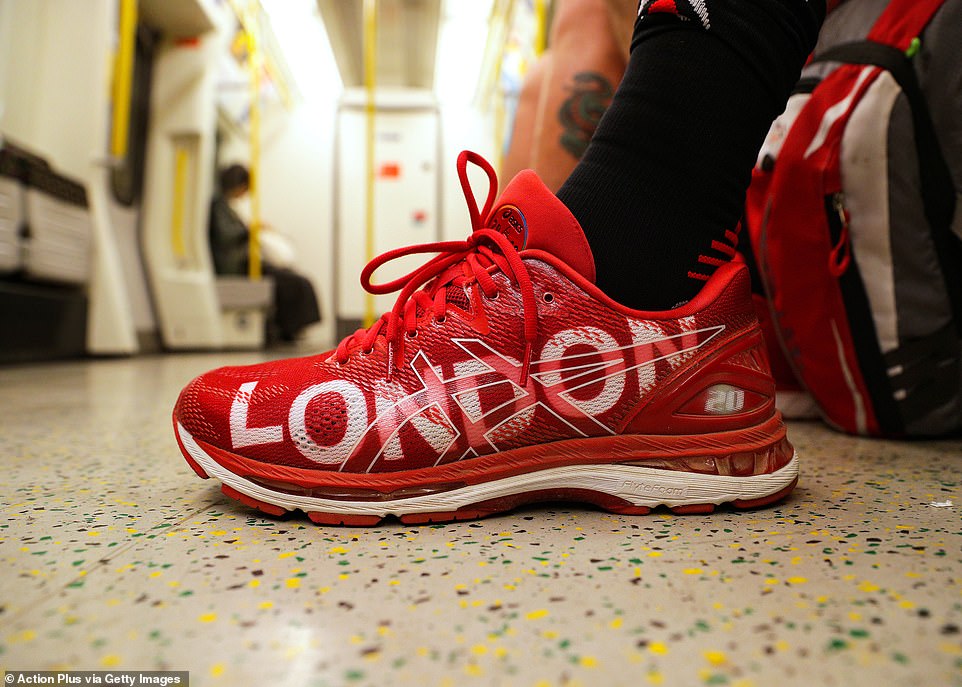 The first race, the Elite Wheelchair, is due to begin at 9.05am, while the main race is scheduled to begin at 10.10am.

Met Office meteorologist Alex Burhill said there will be a chilly start for everyone gathering in Greenwich, although temperatures will climb into the teens.

‘It will be a little bit cloudy at first, but things should brighten up as we go through the morning and into the afternoon with some sunny spells developing,’ he told the Press Association.

‘There’s a chance of the odd shower, but it will be just one or two light showers nothing more than that.

‘It’s going to be less windy than yesterday; it will be a bit breezy, but we are only talking gusts of 15-20mph so nothing especially strong.

The 2018 London Marathon was hottest on record, with temperatures reaching 23.2C (73.8F) in central London.

Woman to run marathon dressed as a giant boob

A woman will run the 26-mile London marathon today dressed as a giant boob.

So Suzy has decided to run the entire 26.2 miles through the capital’s streets dressed as a giant breast.

She said ‘Our lovely friend Georgia was diagnosed with breast cancer in August last year and endured months of intense chemotherapy. 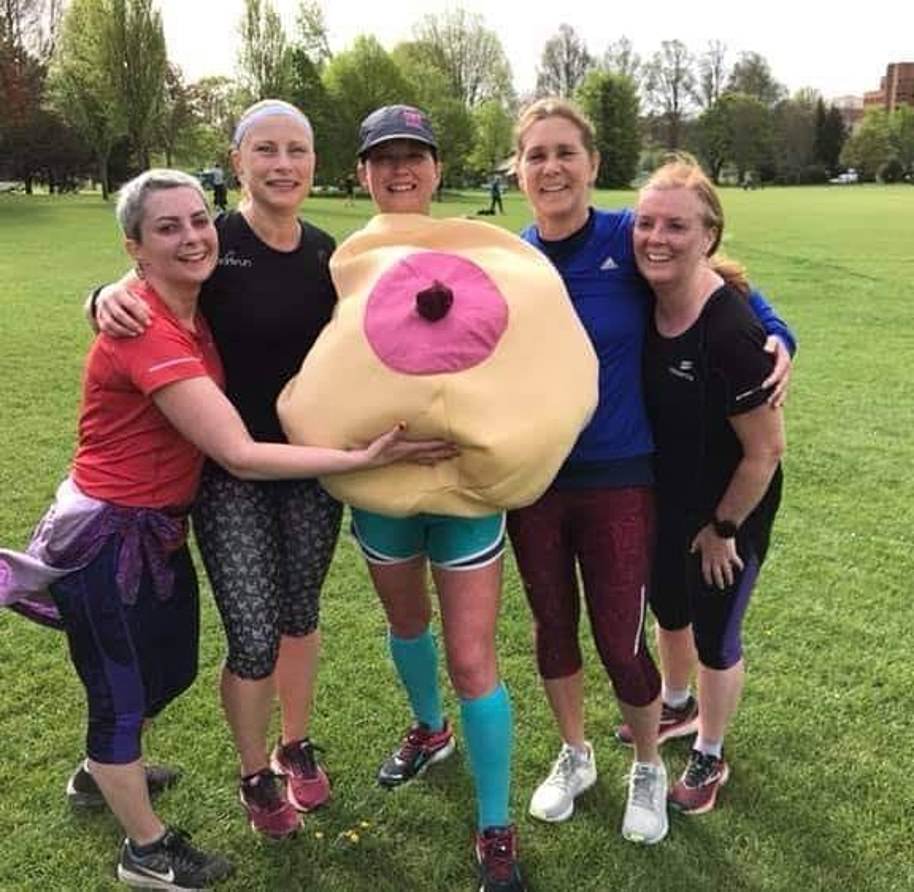 Suzy Hawker dressed as a giant breast in solidarity with best friend Georgia Carrick, 38, who has just finished treatment for breast cancer

‘She achieved her 100th Parkrun midway through her treatment, and her first chemo running medal at the Brighton Santa Dash on December 8 last year.’

Suzy is raising money for cancer charity Macmillan but will be dressed as the boob to show her support for Georgia.

She said ‘What an inspiration she truly is. She received the best possible news on March 13 when she heard that following her treatment there was no evidence of cancer.

‘My husband’s goddaughter was diagnosed with cancer when she was nine and she sadly didn’t make it. She died when she was only 11 years old.

‘And I know people who are still living with it’ added Suzy, an experienced runner who has completed several marathons before.

‘The distance for me isn’t a problem. 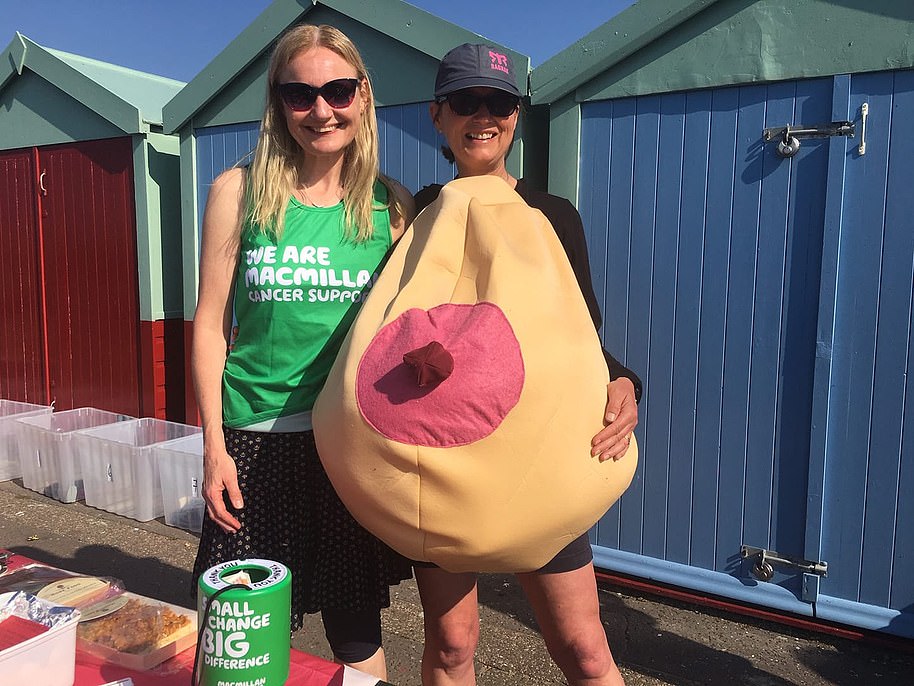 ‘But I’ve never tried to run a marathon dressed up…and dressed up as a boob for that matter.

‘I am going to go to the Macmillan tent to see if there are other boobies doing the race.

‘The nice thing about doing it in a costume is it won’t be as stressful.

‘It doesn’t really matter what time you finish in because you’re dressed as a breast’ said Suzy who recently became a run director for Parkrun.

She met Georgia, a Parkrun event co-director, through the group.

‘Georgia is so great at motivating people. She is an inspiration, especially given what she’s been through.’

Georgia said ‘I wish Suzy luck for Sunday and I will be there supporting her, like she has supported me through my treatment.’